Naemo, a new Modern Korean pop-up has arrived in L.A. From Chef Ki Kim (Matsuhisa) and front-of-the-house Manager Arnold Byun, who’s worked at Eleven Madison Park (NY). Per their website and in chatting, they bring the experiences of working at Michelin-starred restaurants to Korean cuisine. The website pics are beautiful, so the visuals are locked in, but how would it taste? We couldn’t wait to try. 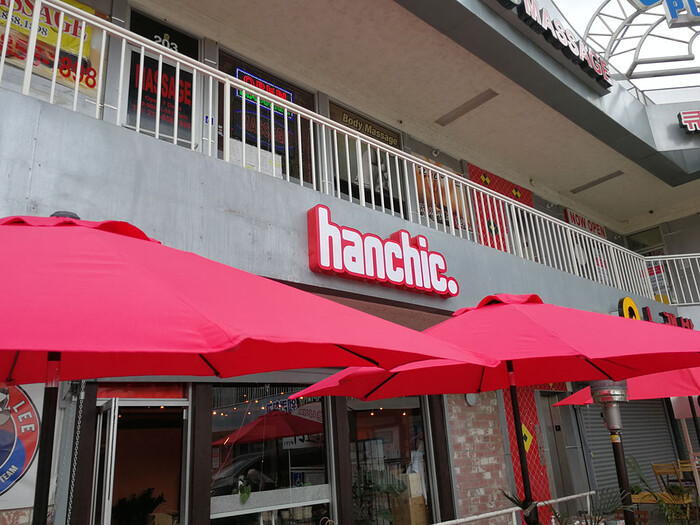 Currently, Naemo is popping up at various restaurants around L.A. They are supposedly doing a collaboration with the chefs at each restaurant they pop-up at, and for this month or so, it’s with Hanchic, a modern / fusion Korean restaurant in K-town. We also met up with a good friend (socially distanced) from Seoul, who wanted to see what this new Korean cuisine would taste like. 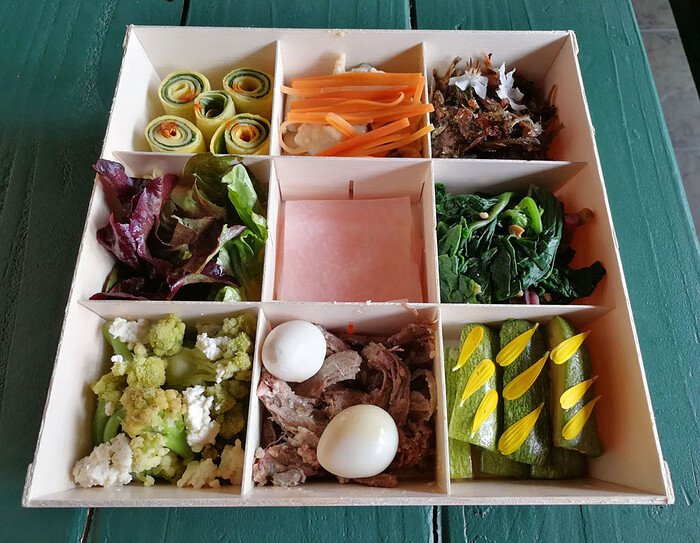 This Spring Gujeolpan meal was sold as portioned for 2 people. When we opened it up, it was beautiful to look at, but in the end, it was probably more like a meal for 1.5 people at best, and 1 very hungry person at most. 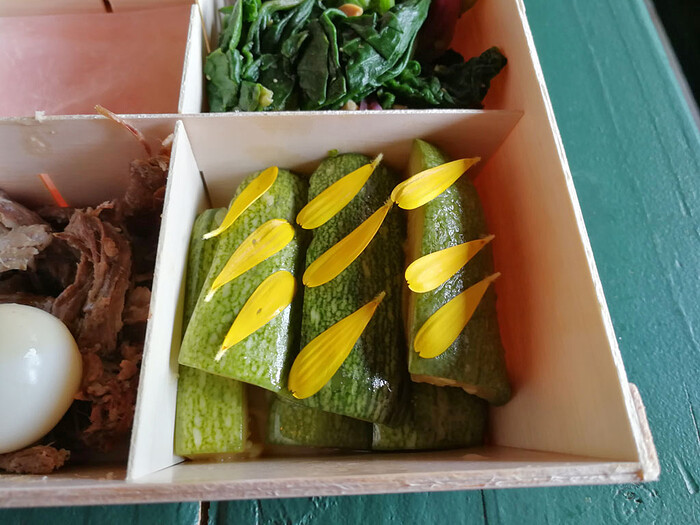 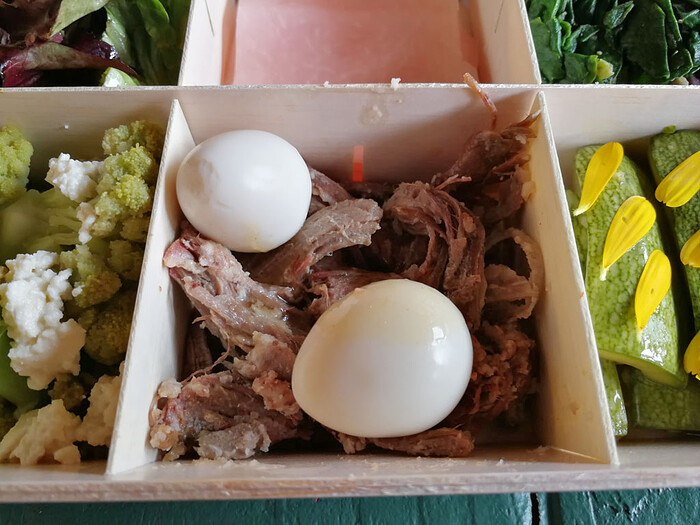 While everything being room-temperature worked for most items, we did wish that the Prime Rib Eye was actually warm / hot. But regardless, a nice rich, beefy flavor, tender, moist and delicate seasoning. There was sufficient salt to make this stand out and it was the highlight of the meal. 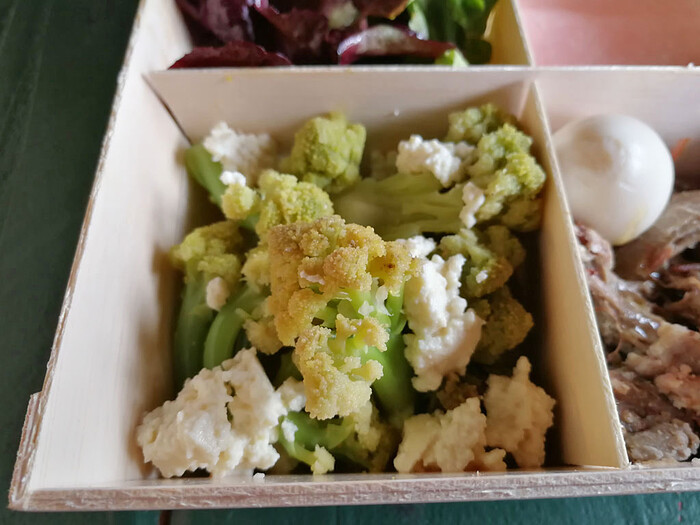 Note: I prefer dishes to be lightly salted rather than heavily salted. I enjoy eating healthy Salads and will eat light vegan meals with my vegan friends regularly (before the pandemic). But this Romanesco Dubu tasted like it had zero Salt, and no other flavors(!).

Our Korean friend texted us after their meal and said the same thing. 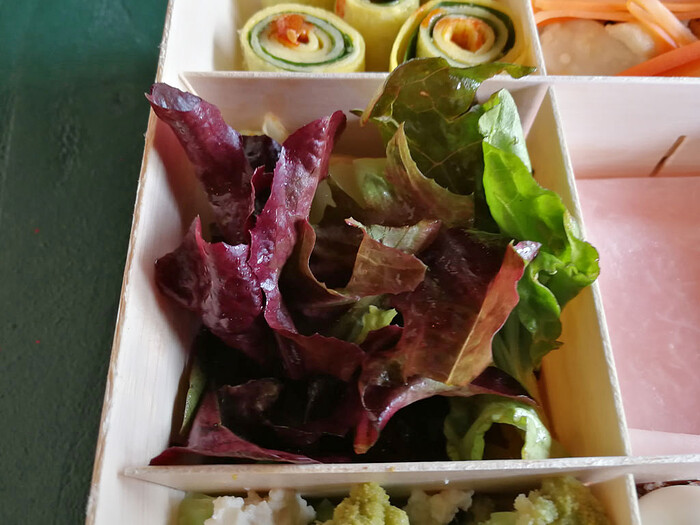 While our menu listed this as “Radicchio Salad,” what we got was Romaine Lettuce.

Perhaps they ran out of ingredients? This tasted like a very lightly dressed Romaine Salad, with nothing else inside. 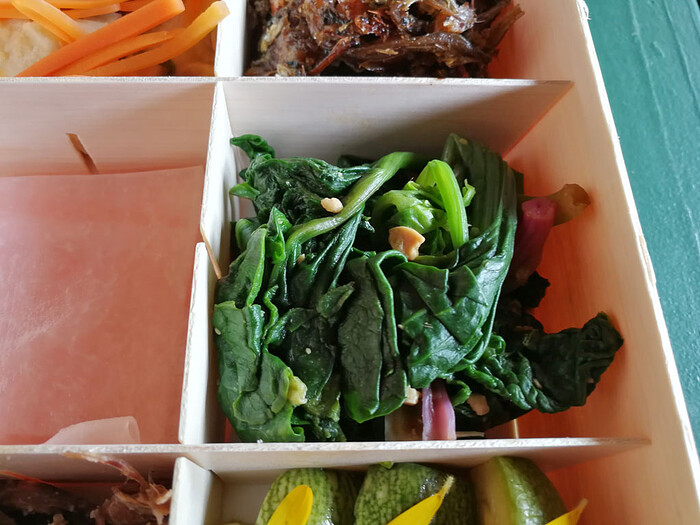 This tasted mainly of Boiled Spinach. There were clearly bits of Shallots in the Spinach but what you got on the palate was just… Boiled Spinach (with almost no sodium / flavor). 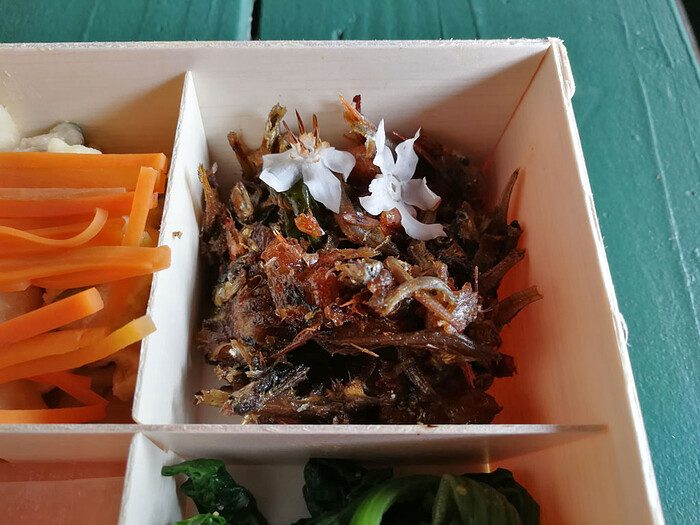 Finally, something with flavor! Nice oceanic spike from the Anchovies, the Dried Shrimp really amped up the brininess, and the Walnuts and Dates lent a sweet, nuttiness as well. 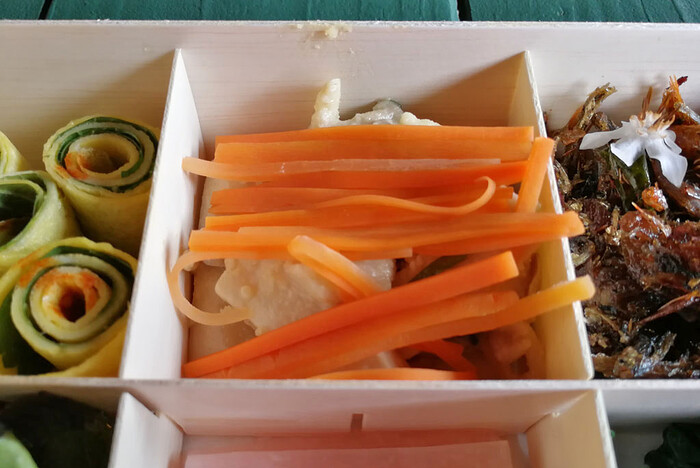 This was another menu discrepancy: We did not get a “Mushroom Medley” but instead got… Potato Salad with Carrots on top. 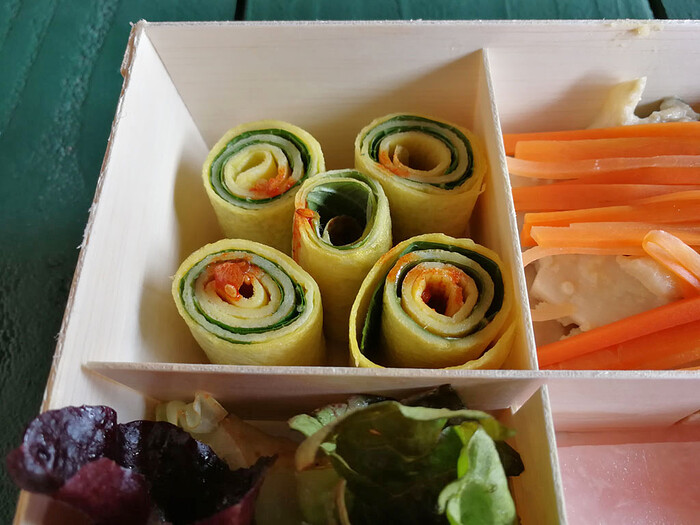 This was fine: Thin sheets of cooked Scrambled Eggs mixed with some Perilla Leaf. It looked suspiciously like a riff off of Perilla L.A.'s Egg Banchan from Chef Jihee Kim, except more clumsy.

The actual taste was fine. But Perilla L.A.'s version was better executed, more moist and flavorful.

The only thing that was really made for 2 people was the Namul Bap / Rice. They gave 2 full portions of this Rice dish per order. While visually it looked more interesting than just Steamed White Rice, the actual flavor was underwhelming: The Namul vegetables were underseasoned, the Rice itself tasted like… Steamed White Rice, a bit sloppy, overly wet, and the Ikura was the only thing giving it some salinity (which is fine I guess). The overall balance of taste? Sort of basic.

When Naemo is charging ~$120 for this box meal, with the portion size for each quadrant of this box being enough for really ~1.5 people at most (or 1 hungry person), the QPR isn’t there. More importantly, the flavors are just missing on every single item except the Rib Eye and the Anchovies.

Naemo has the visuals and nice packaging, made for the Instagram crowd, but the execution and underseasoning really undermine the final product. Our Korean friend from Seoul texted us later and said the same thing: Nice presentation, but there was no flavor. I really wanted to like Naemo and I still root for them to improve. Perhaps it was because of the “collaboration” with Hanchic that caused this? But Hanchic itself has some solid, tasty dishes, so it feels like something deeper. Here’s to hoping they can turn it around and have flavors to match the visuals.

Naemo
Check their website for availability and their next pop-up series.

Aww that’s too bad I hope they can improve!

Shiku is probably doing the best for this new school Korean

I hope so, too! I really wanted to like them, and I think they have some skills certainly. Maybe we went on an off day, but with so many items in their Spring dinner box being nearly unseasoned it felt like something else was up. I’ll give them another try in a few months. Thanks.

Sorry to hear about this.

I think you got a dud of a box.

I’m surprised they don’t offer separate hot and cold boxes. Bad form to have combined the two. Everything should most definitely not be room temperature. This is not reheated Swansons TV dinner.

No worries. Thanks. Yah it seemed a bit strange (that everything was room temperature). Even traditional Korean banchan are chilled usually, and even having the Prime Rib Jorim room temperature / cool felt off.

We’ll definitely give them another try, when they rotate to their next pop-up location / “collaboration” series.

No worries. Thanks. Yah it seemed a bit strange (that everything was room temperature). Even traditional Korean banchan are chilled usually, and even having the Prime Rib Jorim room temperature / cool felt off.

Maybe I’m mis-remembering things from my childhood since I disliked meat as a kid, but I liked jangjorim and I think it was served room temp.

Banchan at our house was cold only because mom pulled them straight of the fridge in a hurry to get dinner on the table.