I’m heading to Boston next month for a conference, and since I have to pay my own way for everything, including 3 meals/day for 4 days, I won’t be doing much splurging (other than maybe a lobster one day–I remember a good, bare-bones lobster places in that waterfront area). Any recs for cheap meals? I’ll have to stay close to the convention center for breakfasts; can take the T to lunch/dinner places. I don’t have any dietary restrictions or cuisine preferences/no-gos. Thanks.

Tatte Bakery and Cafe
200 Pier 4 Blvd
Check out the menu at https://tattebakery.com/boston/

Legal Seafood Harborside
270 Northern Ave
See https://www.legalseafoods.com/locations/menus/boston-harborside-menus/
Not what it once was before a corporate takeover, however they still do a decent job on some classics and the setting is great. I’m a fan of the tuna burger. 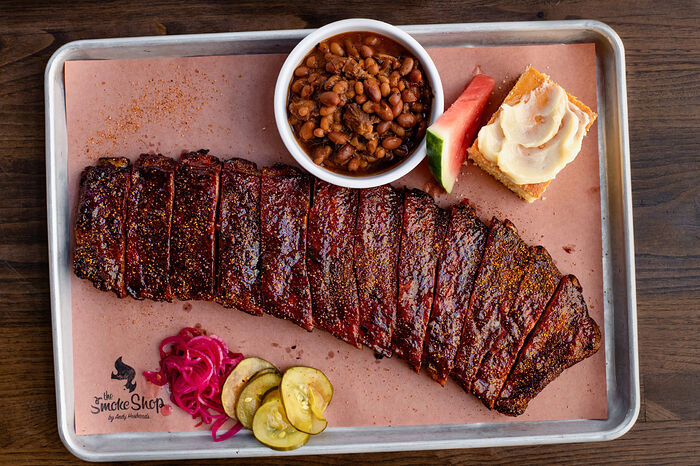 Not the first thing you would think of when it comes to food in Boston, but Andy Husbands has been dishing our BBQ that has earned national respect.

You might want to take a look at the food halls in town, at North Station is Hub Hall Boston: https://www.hubhallboston.com/eat

Or Time Out Market:
https://www.timeoutmarket.com/boston/

Both have some interesting dining options.
Have a good trip

Yes, the one by the Seaport.

Ooh, the BBQ place looks good, and so does the bakery. Legal Sea Foods might be where I grab lunch at Logan on the way home.

I like Sportello. (Well, I did, the few times I’ve frequented.)

I won’t be doing much splurging (other than maybe a lobster one day–I remember a good, bare-bones lobster places in that waterfront area).

You might be thinking about Yankee Lobster. There’s also James Hook and the Barking Crab. There’s a Flour Bakery near the Childrens Museum which might qualify as a cheap-ish lunch?

Other good places that I’ve never been to but are splurge-y are Chickadee and Oak and Rowan.

There’s so much new stuff down there that I can’t keep up. I feel like you could walk around and find something to your taste (or ask us about it on the fly)?

I got a coffee from Greco, near the Institute of Contemporary Art. Good coffee, kind service and the Greek food looked good. Not fancy but pleasant atmosphere, on my list to try next time I am in that area for lunch or dinner.

Tatte is worth considering in the same category, not fancy but pleasant atmosphere.

Yup, Yankee Lobster is where I want to have that dinner splurge. The last time I was in Boston (2014), I had a great meal there. And Flour Bakery is on my to-go list too–I’ve been to the branch by MIT.

For seafood in the raw there is also The Barking Crab (88 Sleeper St). It’s been decades since I’ve been there, it can be a bit of a scene. It has appeared on several movies set in Boston, which might explain the crush.

Where are you staying?

Some of the suggestions here are anything other than cheap, so do your research OP so you don’t come away with sticker shock. That’s a reflection of the lack of such options in that neighborhood (and Boston in general). Not too far away are Gene’s Chinese Flatbread Cafe (excellent hand pulled noodles; hot & sour soup), and Sullivan’s at Castle Island is a fun burger and seafood shack on the water. Galleria Umberto in the north end is sort of a mandatory stop for a Sicilian slice (lunch only).

Right by the Boston Convention Center. It’s more important to be in the general area for breakfast, so I can grab something right before the morning conference sessions.

Thanks. I don’t use Uber or Lyft, so it would have to be someplace easy to get to on the T.

Chinatown isn’t far by foot from the conference center