I’d been fortunate enough to visit Kao Soy in Red Hook during its short pop-up tenure. The genealogy is complicated. Kanlaya Supachana opened Kao Soy after splitting with her partner (romantic/business) at Chiang Mai. Most of the kitchen staff and servers went with her. But she couldn’t find a permanent place, and apparently is now in North Carolina working on a new restaurant. Her co-chef Sirichai Sreparplarn stayed in NYC and has opened Ugly Baby on Smith at 4th St (close to the Carroll St F/G subway station). It’s open at 5 on weekdays and at noon on weekends. I learned about it from an Eater article dated Aug 30. Sirichai is featuring dishes and styles from all parts of Thailand, as well as his music (which I think he also programmed at Kao Soy, definitely above average as far as I’m concerned).

On my first visit, I was alone, and the place was fairly quiet, since it was Hallowe’en. Occasionally a group of kids came by and the servers handed out candy. I had to have the khao soi again. 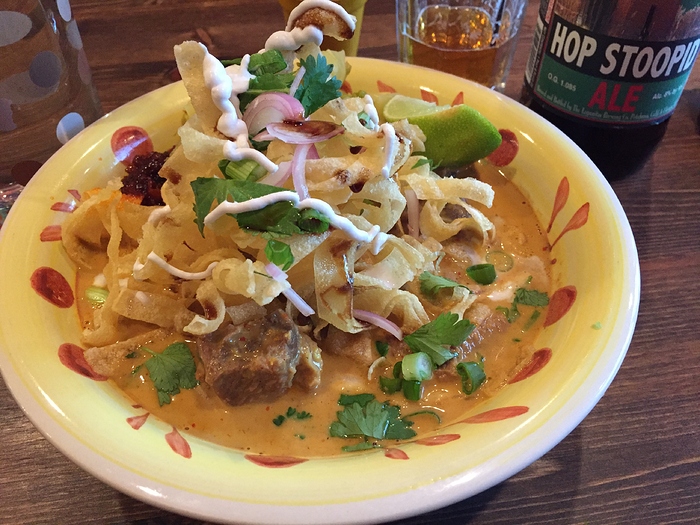 Even more intense than at its namesake pop-up. (Note the dab of chili paste at upper left, without which it would still be fiery.) There are cubes of beef shank rather than the traditional chicken leg, which I don’t think is an improvement, but overall the dish is so good I will forgive this. They are currently without a liquor license, so BYOB from a nearby deli/bodega or wine store.

On my second visit, my partner came along, and unfortunately it was Saturday and the day after a Voice writeup. There was a lineup when it opened at 5, but it didn’t completely fill up until nearly 6. My dish came first and my partner’s some time later, not ideal (the waitstaff are very friendly and helpful, but not polished yet). I ordered the Kang Hoh, which is pork shoulder, spare ribs, and glass noodles with Hang Le curry paste, green beans, fresh bamboo shoots, thin slices of Thai eggplant, pork rinds, and sticky rice. This is medium heat for this place (would be three chili peppers elsewhere), tender, complex, and quite satisfying. She ordered the milder Tom Som Pla Kra Pong, Central-style red snapper in ginger/tamarind broth, with a bowl of jasmine rice on the side. (The full menu is available on their website.) 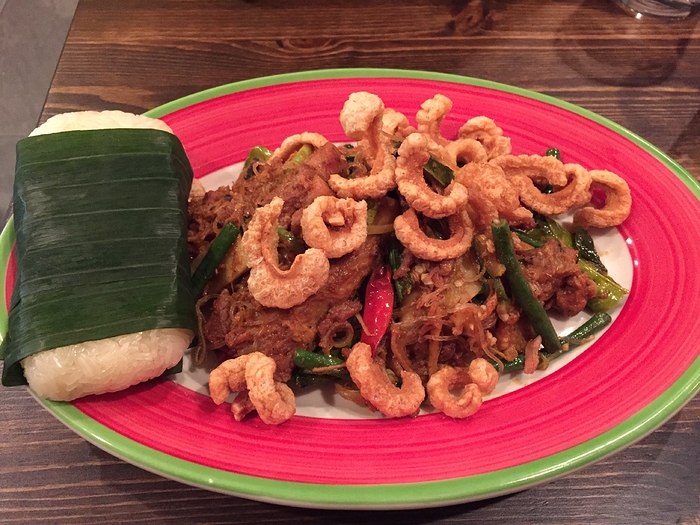 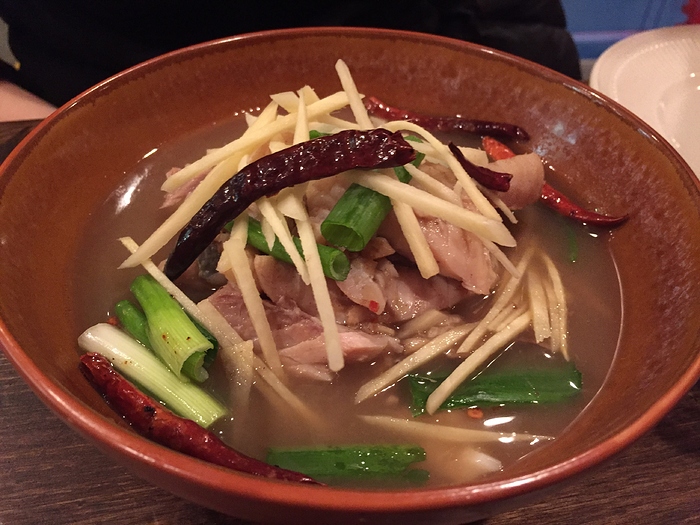 Both of these were great, as was the durian with sticky rice and sweet-salty coconut milk we had for dessert, while late arrivals waited for our table. It all took long enough that I drank all of the NZ Marlborough Sauvignon Blanc I had bought at Carroll Wines and Liquors nearby on Court St. 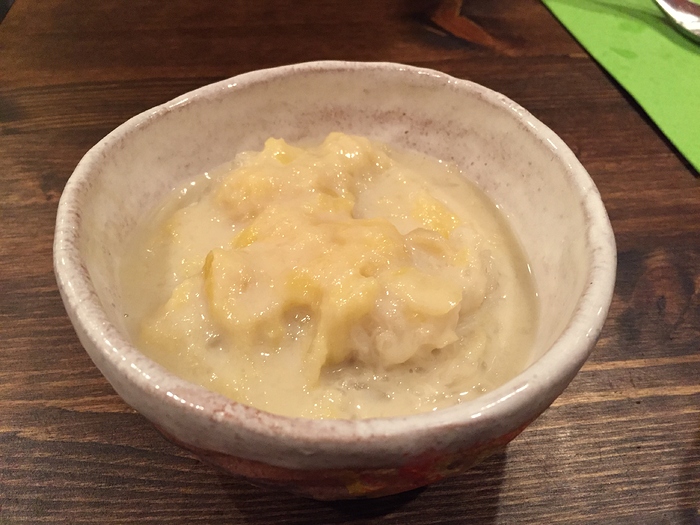 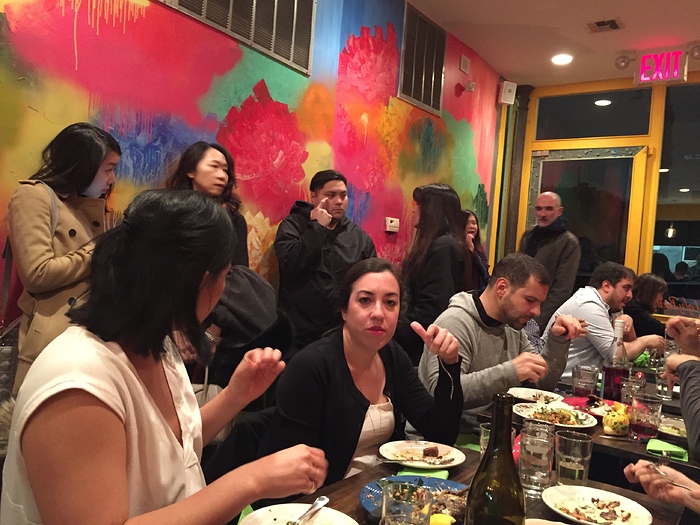 The restaurant is narrow, with three four-tops, perhaps eight two-tops, and a few bar stools. Hard surfaces everywhere, meaning it got noisy when it was about half full. The woman who seated us was pretty much on the phone constantly afterwards, whether for takeout orders or expressing regrets about the lack of reservations, I am not sure.

There was a Thai mother and daughter next to us, and we got to chatting. “This is real Thai,” the mother said. I asked where else she goes, and she mentioned Wondee Thai in Hell’s Kitchen, and Playground in Queens (midway between Sripraphai and Kitchen 79). But, she said, for both these places, you have to ask for the Thai menu (which comes with translations).

I fully intend to eat my way through the rest of the menu at Ugly Baby, hopefully before they get their liquor licence. This place is going to be a big success.

I shall live through your eating your way through the menu.
(I am unlikely to be there in the near future.)

They have their liquor license now. I had to carry back the beer I brought with me. Unfortunately, their beer selections are not to my taste, and are expensive. (There are some wines, but they’re also expensive, and it is the rare wine that can stand up to this food.) 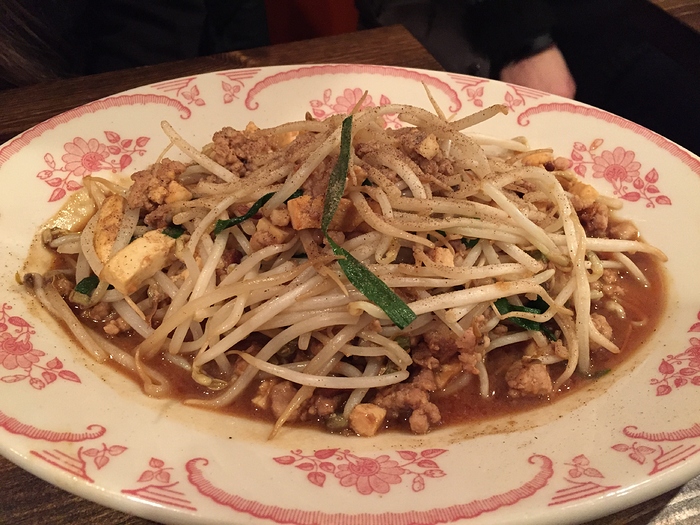 My partner tried one of the new dishes on the menu, Pad Tua Ngok Rau Kao, which, as you can tell from the picture, is bean sprouts stir-fried with ground pork and tofu. It was quite mild. I had the Mee Kati Isan, which has a peanut-coconut milk-pork sauce over rice noodles with raw bean sprouts. It was also billed as “mild”, which it might have been if I had carefully picked out the tiny sliced disks of Thai chilies sprinkled on the bean sprouts. Those built up heat steadily over the course of the meal; I could have used that beer. 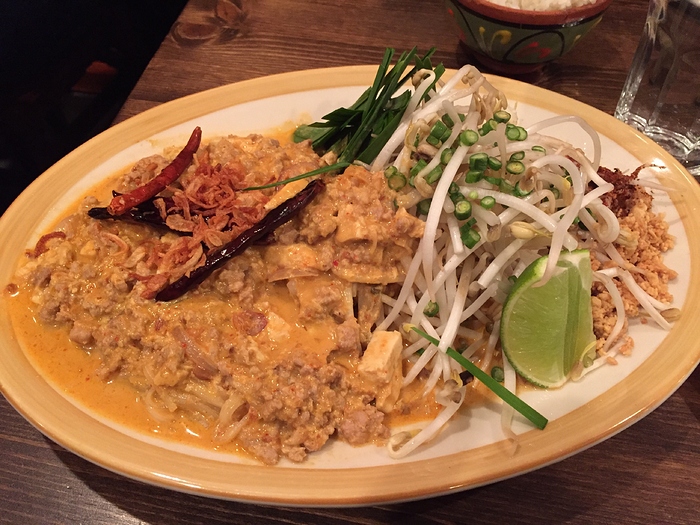 These dishes were not as spectacular as the ones we had on previous visits, but were still head and shoulders above most Thai we’ve had in Brooklyn so far.

The front door is not hung properly, and it sticks open an inch or two if not pushed firmly closed. This caused gusts of chilled air to wash over everyone until someone got up and saw to it… repeatedly. I hope they fix that, and maybe get a bit more organized, because the place is popular after its good writeups in various media, and service is straining to keep up.

I’m finally looking at this thread. Have you been back more recently? Is there a super-long wait all the time?

I’ve been away from NYC since December, but I’ll return for the summer. I’ve been back one more time since I wrote the above. They have hung a canopy to deal with the cold air. We always go early (before 6) and get seated immediately, and there are many people waiting when we leave. The menu continues to evolve slowly.