The Wifeacita and I went to the original non-chain a week ago Saturday for our annual blowout. We arrived mid-afternoon when it’s slow but knowing we would be there more than a while we wouldn’t hog the space but still catch fast action at the end at our traditional pasta bar seats.

The pasta bar allows you to sit a few feet away from the chef and cooks and watch the action. The Wifeacita bullies her way into the right hand seat where she could snatch food off the plates if she was so disposed. I settle for the lesser left seat. We recognize the lunch chef and cooks and most have been there 15-25 years. We know the night chef as well after the shift change.

Our super waiter Rene knew us from before and was always gracious knowing we would be there a while. Nobody sits in this area mid-day so I don’t feel guilty taking our time.

Food. We split a small house salad. The app of shrimp and crab Osiel is off the menu and the best thing in the place. It’s enough for an entrée and has fried shrimp and lump crab in a garlic lemon butter sauce with asparagus and red peppers. The shrimp is fried perfectly and is still crispy in the butter sauce.

Entrees. I’d been threatening to get the chicken parm and finally pulled the trigger. It was good but I’ll stick to other choices. The fettuccine Alfredo that comes with it is a must order every time. The Wifeacita split a pasta Weesie, Alfredo with shrimp and mushrooms plus stuffed shrimp Mandola, shrimp baked with crab dressing, both delicious.

I had a bottle of Zinfandel plus a glass, that’s right, the Wifeacita two glasses of a French Rose. Dessert was a fudge brownie with Kahlua chocolate mousse, whipped cream, and hot chocolate sauce. We wolfed it down. We also got a biscotti cheesesteak that might as well been Sara Lee.

As we were finishing the place was very busy and the kitchen was running like a well oiled machine with perfect timing on all dishes. I quickly got the check to free up space as the pasta bar was getting full. We were there a long time and our great waiter Rene got a tip north of 25 percent.

Their cooking show’s music selections were the best.

We’ve seen Johnny Carrabba in there a couple of times, not just pressing the flesh but tasting sauces and talking to the cooks, very involved. We were able to meet him, a really nice guy.

On our previous visit we met the father, just as nice.

We love this place from the food, service, to watching the perfectly precise cooking at the pasta bar.

They are large personalities. Come to think of it, Cucina Amore was a departure for PBS programming. We’ve never been to the Mother Ship (nor Capital Grille that replaced Confederate House where we once spotted Coach Sherrill probably entertaining a recruit’s parents?). Buon appetito.

We went for lunch in February for the first time in probably a year. I got my usual shrimp Damian with the alfredo and you couldn’t be more right about that alfredo.

The only better shrimp I’ve had is at Paesanos on the Riverwalk. Like you say, it is impossibly crunchy shrimp in a butter sauce with alfredo on the side. Don’t miss the Shrimp Paesano in San Antonio when you next head west young man.

I don’t go to Carrabbas often but when I do it’s usually at the Voss and Woodway location or as we call it “Rosie’s”.

I rarely splurge though almost always ordering a Caesar Salad and a bowl of Mamas chicken and vegetable soup. Occasionally the chicken Bryan.

Ms. Rose is a lovely soul.

Shrimp Paesano, been there ate it and it’s spectacular.

Head west, that’s a good one. We went to San Antonio and Austin a year and a half ago and I realized I has not been on I-10 west of Beltway 8 in at least several years and I live just a couple of miles away. East yes but not west.

I loathe interstate highways and exit I-10 in Columbus and pick up US90 to Luling for the necessary stop at City Market. This route follows the railroad and I can get my train fix in.

I went to non-chain Carrabba’s on Voss for the first time this week and did not order my usual shrimp with a side of fettuccine Alfredo . Instead I ordered shrimp OVER fettuccini Alfredo with mushrooms.

It was way rich and the garlic was overwhelming. I’ll stick with the modest portion that comes as a side next time. I loved the dining room with big round tables for 6 which is how many we were! 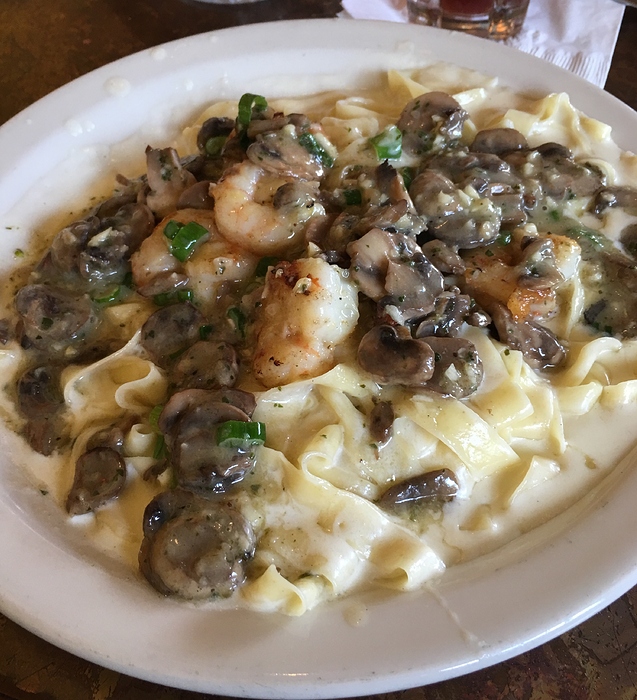