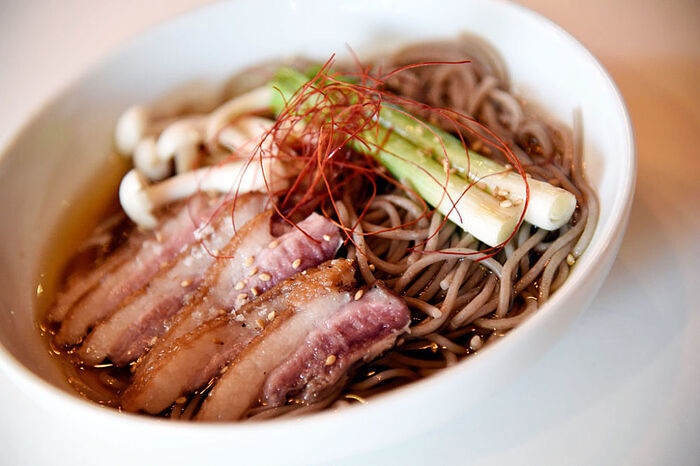 Why We Need To Stop Calling Food 'Exotic'

Washington Post food writer G. Daniela Galarza says the word "exotic" is problematic no matter what it's describing, and we should stop using it — full stop.

I’m putting my size 11WW foot down on this one. The word conveys desirability when it comes to physical beauty, tropical vacation destinations, and restaurant offerings. Thoughts?

I’m not a fan of making words off-limits (with a few exceptions), but there’s merit to this in that, as the article states, “Exotic was originally a Greek word used to describe something foreign or alien,” i.e. “theirs, not ours.” And as far as physical beauty goes, “exotic” pretty much means “not white.” So maybe we need to come up with a more interesting word than “interesting,” or “new to me,” which I think is what a lot of people mean when they say “exotic.”

But my feet are only a size 5M.

To a lot of the Anglo-Saxon world, Greek food and tourism are “exotic”.

Can’t say I’ve ever been aware of any food being called “exotic”. But hey…… writers have to write I guess.

I don’t think that’s true. Greece is in Western Europe, and thus probably regarded as “regular” by most Americans (which is what I assume we’re talking about). I can’t think of a single ingredient in Greek food that would be unfamiliar to an American palate, although I’m prepared to be educated. But I’m not going to argue this to death, because there are far worse things to be called than exotic. The mind reels.

I use . Gorgeous , Fantastic , or super . Exotic , never even considered it

I don’t use the word exotic much, but I did recently describe some plants of bogman that way. I couldn’t find a shame emoji.

I’m not really conscious of the use of the word “exotic” in current food contexts. I’ve heard of exotic dancers - or strippers, if you will.

It’s probably disappeared as a word here as those foodstuffs are no longer unfamiliar. Holiday travel and immigration have both widened our food culture.

See? there I am, getting educated. I still stand by my general assessment. And I’ve never seen mastic on a menu in the U.S.

RE: the link in the op: rubbish.

While the world has become smaller and more familiar due to technologies such as transportation, Internet, varying forms of communication, and the ease in relocation the word exotic still has application.

Conclusion: much ado about nothing.

I remember years ago, we invited Mrs H’s parents for dinner. FiL said “I hope you’re not doing anything exotic - like green beans”.

I hear you. I actually had the same reaction, at first, that others on this thread did. To me, something exotic was always interesting, desirable, and special in the context of the place I was—even though the item being described may be commonplace somewhere else.

That said, if the descriptor exotic makes people feel that their food is less valued than a mainstream foodstuff or is marginalized then I am willing to let the word go.

The positive connotation I have long held in my own mind for exotic may not be held by others. I can see that point. Word usage evolves over time, yes?

Also, I too wear small shoes.

I’m not at all impressed with Ms. Galarza. US size 10C.

The meaning of words do change over time and I agree with @tomatotomato Denise that the meaning is more like interesting/desirable/special.

The demise of “international” aisles in American groceries is most likely to spread products out to drive people to spend more time hunting for what they want to increase the chances of spontaneous purchases. I don’t think it’s cultural awakening.

A drink in a hollowed out pineapple with two straws will always be exotic to me, whatever the dictionary says.

That said, for myself I am letting the word go. I am fine with making that change in my own usage.

Right. Exotic meant weird and undesirable to your FIL.

What demise of international aisles?
They certainly still exist in my regular loop of stores.

To me, something exotic was always interesting, desirable, and special

Yes, that’s what it SHOULD mean. Just like “articulate” should be a compliment. And yet. I’m not quite sure how to explain this, but sometimes it’s not the word’s definition that changes, it’s the way the word is used.

What demise of international aisles?

I was merely repeating Ms. Galarza’s contention. I haven’t seen a change either. If there is a shift in her geography I think it’s more about getting people to buy more stuff.

I offer that @greygarious Erica chose a good title for this thread. Ms. Galarza’s article is cancel culture and gaslighting.

In TO and Mtl, the Greek restos with a significant Greek client base will offer lamb brains , kokkoretsi and desserts flavored with mastic or mahlepi.