Can we let go of the term 'fusion cooking' once and for all? 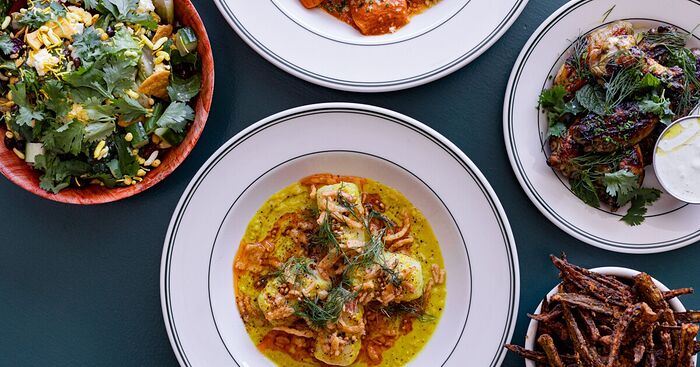 Can we let go of the term 'fusion cooking' once and for all?

The outmoded term lurks in the margins of American dining culture and food writing. It lives in my head against my will.

I know I’ve grown tired of the term. But, it’s the human way to label everything. I like to call it all “food.”

I agree that more specific descriptions are useful, and that “Asian fusion” is such a broad term as to be useless. But it’s helpful to know whether a restaurant is serving traditional dishes, modernized versions, or food that incorporates elements from more than one culture.

Eh, that article wasn’t much of anything.

I’ve been following Pijja Palace (the restaurant that seeds the article) for a while. Indian-Italian fusion describes it better than any other term — what would they call it? Pasta dressed with tikka masala sauce (one step removed from vodka sauce: I know because the best tikka masala I ever made was from homemade vodka sauce). Pizza using popular indian restaurant gravies as the sauce (naan can be made from pizza dough, so really not that much of a stretch either). And so on.

It’s not Indian Italian without a hyphen, because that’s actually a different style of food to Indians, like Indian Chinese / Punjabi Chinese. It’s not Modern Indian, which is how I tend to describe the likes of Baar Baar in NYC or Rooh in SF and elsewhere. It’s more than Desi Pizza, which exists in the Bay Area as well as in Queens and NJ.

Objecting to stuff for the sake of it seems silly. Sure, maybe the term fusion is overused and doesn’t fit in other situations. But if it fits, why make it negative.

This guy IS a restaurant critic for the Times, so I was wondering if his words carry any weight, or perhaps he’s too jaded by being in the belly of the beast.
I trust your words, anyway.

Fusion’s just an outdated term - I’m sure that a descriptor that means the same thing will become popular at some point. What I’m really wary of are restaurants that serve “Asian” food. As I would be of a “European” restaurant, if I’d ever encountered one.

What term would you use instead for the place he’s describing?

Like you did: Indian-Italian. Did Chinese Mirch describe itself as fusion, or Indian-Chinese? I forget.

Hmm. I called it Indian-italian fusion. If they called it Indian-Italian I’d be expecting Indian Italian - processed Amul cheese, spicy tomato sauce, combinations of vegetables you wouldn’t recognize, and paneer.

Is there a difference between “Indianized” Italian and Indian-Italian fusion? I probably wouldn’t call the pizza I had in Tokyo* Japanese-Italian fusion. I’d called it Japanese-ized (there’s a word I haven’t typed before) Italian food. But I really don’t have much against the word fusion, if it helps people understand what they’re ordering.

*tuna on saltines with mozzarella cheese

I think the the term has become meaningless. To say, for example, that a dish has an element of a nation’s food overlooks the fact that many nations have multiple cuisines and within those cuisines are those who play at the edges or develop their own spin. Also, how far must one go to call a dish fusion? How about simply a dish with a novel element, like green chili rajas in cacio e pepe or jicama in a stir fry? I think that unless you hunt your own meat and eat it raw or forage for edible things like nuts and fruits, it’s all fusion from there on, hence a pretty meaningless term. The first person who decided to cook the fowl they caught with the mushrooms and onions their friend foraged was fusing hunting and gathering.

The first person who decided to cook the fowl they caught with the mushrooms and onions their friend foraged was fusing hunting and gathering.

No, he was just cooking. Hunting and gathering were methods of securing ingredients.

Just because a word has, in some cases, seems to be “outdated” or “meaningless” is merely an unintended effect of how the word has been used.

It says nothing of the word, itself, which for all intents and purposes has not changed (for better or worse) since its first use (in the case of the word fusion, some 5 decades ago circa 1550).

If we as a society feel like a word has become “outdated” and “meaningless” does not mean we should stop using the word, full stop; but, rather we should start using the word in a more contextually appropriate manner.

Heck yeah, you want an idea of what you’re going to get. But Asian/Mexican/Latino/Mongolian/Japanese/Korean/Indian fusions don’t give you much idea. So, great for the like-to-be-surprised crowd. I like to wet my palate on expectations to some degree. I have never entered a resto with “fusion” in the name. Maybe the very best flavors of Korea and Mexico, or a shit show. I’m not going to find out until I get some word of mouth.; and not just the enlightened enough to “get it.”

two things I have learned to ignore with great prejudice and immediacy:
“fusion”
“curated”

Well they certainly two different ways to get your food, but they were also the only two cuisines. Either way you look at it, I am glad that we have moved ahead and developed so many wonderful things to savor.

“Hunting” is not a cuisine. That’s like saying “shopping” is a cuisine. Hunting and gathering are just ways to acquire food. Maybe you mean that harvested vegetables is a cuisine and cooked meat is a different cuisine.