Can I get some help in reading this please?

I cannot read some words in this document. Specially the boundaries mentioned here. It would be a great help if anyone can read this for me.

Thanks a million times. 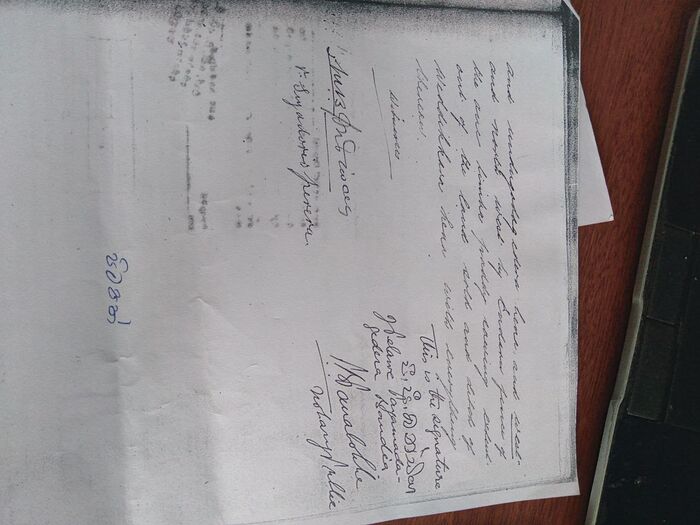 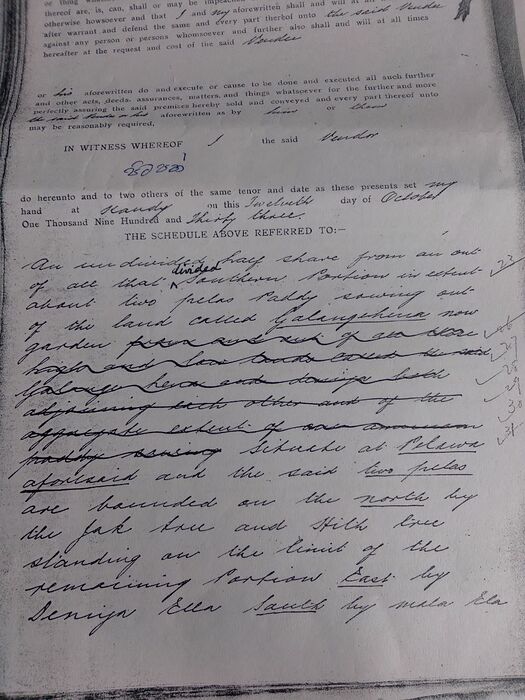 Good morning from northwest England. Gosh, this isnt easy (but seeing as it mentions Paddy fields - presuming for rice growing, we’re on topic for a food forum). This is what I’ve made out starting with what’s written after the printed bit

An undivided half share from an out of all that divided Southern (?) portion (?) in effect about two fields (?) Paddy coming out of the land called G… now garden

Sch… at P… aforesaid and the said two fields are bordered on the north by the Jak (?) tree and the H… tree standing in the limit of the remaining portions east by D… Ella … by … …

Not great but best I can do, mate. Hopefully others can check over my efforts and see if they can fill in the gaps

Thanks mate, you’ve added more to what I could already read. Awesome.
These were land deeds written during the British colonial times many decades ago. Today it’s hard to read as that style is long gone. That word at “Sch… at P… aforesaid and the said two …” is “Pela” which was a unit used long ago, and not even known by people today.
So the script is archaic and the vocabulary is archaic, but the validity still stands. That’s the issue.

Good luck with filling in the gaps.

I used to do a lot of research about World War 1 and I’d often come across hand written documents that were really difficult to work out. Most of the time, I’d get enough to make sense of it but, on occasions, I’d just have to give up.

My dad’s handwriting was like this, but more artistic. He belonged to the last generation that studied in the English medium at state run schools in Sri Lanka. Then came the “patriotism” that ruined the whole system, and education was to be delivered in the vernacular. One of the biggest mistakes our politicians made.

Our late friend, Tom (an Anglicised name from his Tamil original) came to the UK in the late 1950s/early 1960s, originally for medical treatment and then stayed. He worked with my wife for many years. He had, of course, been educated in English and was quite damning about how, as he saw it, Sri Lanka society had deteriorated, post independence.

Well, the Sinhala Tamil “conflict” as a conflict goes back about 2 millennia. Sri Lanka has been governed by Tamil kings several times. The last king of Sri Lanka, king Sri Wickrama Rajasinghe was also from South India (he changed his name to Sinhala in order to get the support) which was why the local noblemen supported the British to topple him believing that the British would crown one of them as king. But the British had other plans: they brought the whole island under British monarchy.
During the British era many things changed. Christianity arrived, Roman Dutch law was already taking root, English became the main language, missionary schools were established, tea, coffee, and rubber became main crops, and so on and on.
With that, post independence, it became a power struggle and party politics came to the fore. People divided into nationalities in order to get votes, and politics became a business.
Now we are enjoying the “benefits” of not focusing on the development but on making personal profit.

I’ll give it a go later today. Seems like I can make sense out of a couple of lines/words at least
Odd tidbit:: my birth certificate is writen in a similar style

I totally forgot…
Do you still need help?

From the looks of the letters I thought Russian would be easier to read compared to English.

I think I got the complete text after analysing all hints I got. One main tricky point was the letter ‘t’ at the beginning of any word.