Can Belgium claim ownership of the French fry?

Nobody round these parts ever buys the “French” part. It’s pretty much common knowledge that these delicious, thick fried potatoes are Belgian.

I ate some last week in Brussels. 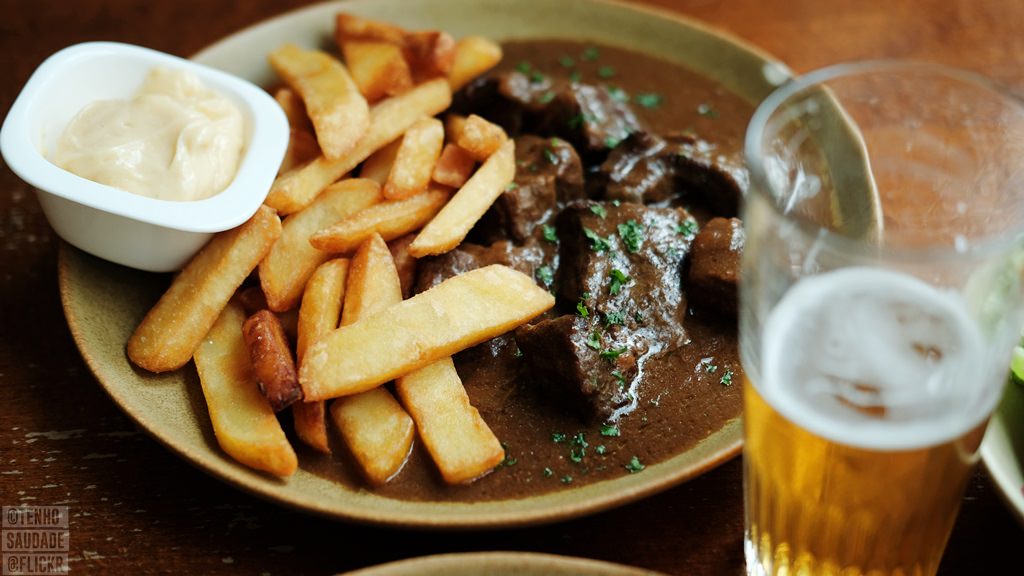 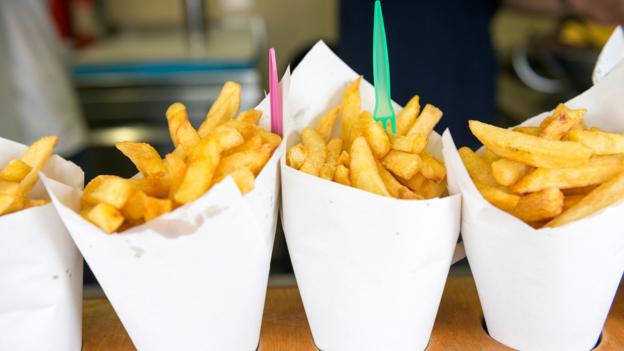 Can Belgium claim ownership of the French fry?

Although Belgium is currently petitioning Unesco to endorse the fry as an official icon of Belgian cultural heritage, we’ll likely never know the dish’s true origins.

Whether it’s English fish and chips or poutine in Québec, Parisian steak-frites or Belgian frieten with mayonnaise – or even a ‘supersized’ fry order in the US – many places have laid claim to the simple fried potato.

Despite the common name of this dish (and the fact that France has given the world many famous foods, from the baguette to the soufflé), the French fry is unequivocally Belgian, at least according to Albert Verdeyen, chef and co-author of Carrément Frites, which charts the history of the fry.

Common lore claims that the original fry was born in Namur in francophone Belgium, where the locals were particularly fond of fried fish. When the River Meuse froze over one cold winter in 1680, people ostensibly fried potatoes instead of the small fish they were accustomed to, and the fry was born.

Proponents of this story claim that this Belgian town is not only the source of the French fry, but indeed, of its name: American soldiers, stationed in the francophone region during World War I, allegedly dubbed the potatoes ‘French fries’, and the common (if slightly imprecise) moniker was born.

Although Belgium is currently petitioning Unesco to endorse the fry as an official icon of Belgian cultural heritage, some claim that this legend doesn’t quite hold water.

Culinary historian Pierre Leclercq, professor of the University of Liège, noted in an article on the history of fries that the story is “not plausible”.

First and foremost, Leclercq explained, even if the Namur-based legend is true, it’s far more likely that it took place, not in 1680, but in 1739: after all, he wrote, potatoes were not introduced into the region until 1735. But even once the Namurois had spuds at their disposal, Leclercq said, it’s unlikely that they deep-fried them.

“In the 18th Century, fat was a luxury for people of limited means,” he explained. “Butter was expensive, animal fat was rare, and cheaper vegetable fats were consumed with parsimony. That’s why peasants ate fat straight, without wasting it, on bread or in a soup.”

He noted that for this reason, the notion that the poor would waste fat by using it for deep-frying seems suspect, challenging the credence of this traditional tale – regardless of when it ostensibly took place.

Leclercq is not the only one to believe in a different origin story for the French fry. Some people, particularly the French, take the name of the dish a bit more literally. These proponents of a truly ‘French’ fry claim that the delicacy’s first form was the pomme Pont-Neuf, a deep-fried potato sold by pushcart vendors on Paris’ oldest bridge, the eponymous Pont Neuf, in the late 18th Century.

Potatoes had been deemed suspect by the French ever since their arrival from the New World, despite 18th-Century efforts by agronomist Antoine-Augustin Parmentier to democratise the vegetable after he encountered it as a Prussian prisoner. Parmentier went so far as to hire soldiers to stand guard around his potato patch to increase the allure of the humble spud, even allowing civilians to ‘steal’ potatoes in the dead of night, thus furthering their reputed desirability. By 1795, the potato had attained popularity across the country, so it’s no stretch of the imagination to consider that the first French fry would be invented and sold in France – why not by these bridge-bound peddlers in the late 18th or early 19th Century?

“The inventor of the fried potato will probably always remain anonymous,” said Leclercq in his article. “But we can guess his job: peddler. We can also guess his origin: Parisian.

But despite this vote of confidence for the ‘French’ fry, we may never truly get to the bottom of who actually invented the food.

For one, it’s hard to know whether written references to fried potatoes refer to deep-fried lengths of potato, or rather to rounds sautéed in a pan with butter. The French fry first appears in writing – in its current form and with the time-honoured technique of double-frying to achieve the perfect crust and tender interior – in the early 20th Century in a Belgian guide called the Traité d’économie domestique et d’hygiène (Treatise on Domestic Economy and Hygiene). But for Leclercq, even this isn’t enough to categorically prove the fry’s Belgian-ness.

“Prudence obliges us to not jump to conclusions based on only one text,” he wrote, alluding, too, to a tradition of double-frying in France, as with pommes soufflées, a round of potato that naturally puffs up with air when double-fried.

“The fry is a daughter of street cooking,” culinary historian Madeleine Ferrière told Le Monde. “That’s why it’s so hard to establish its birth certificate.”

But perhaps it’s not its birth certificate that matters when deciding who truly lays claim to the French fry, but rather, who has created the most emblematic version of the dish.

For some, the French fry, no matter its Francophone origins, has become undeniably American, with the average American consuming about 29 pounds of them a year. The US even went so far as to divide fries from their European origin entirely, with the early 2000s’ shamelessly patriotic ‘Freedom fries’ in the wake of France’s refusal to support the US’s invasion of Iraq.

Canada, meanwhile, home to McCain Foods, the world’s largest manufacturer of frozen French fries (and other frozen potato specialties), has truly made fries a national dish thanks to poutine. The combination of fries, cheese curds and gravy first appeared in rural Québec in the 1950s, though its exact birthplace is nearly as much a source of contention as that of the French fry itself, with claims from both the towns of Warwick and Drummondville.

“There are two or three versions, but I don’t think we’ll ever know [which was the original],” said Charles-Alexandre Théorêt, author of Maudite Poutine. “And maybe it’s better that way.”

Today, the former working-class dish has become a culinary star for all Québeckers, with Montreal’s La Banquise restaurant offering no fewer than 30 combinations of fries, cheese and sauce, and Chef Martin Picard of Au Pied de Cochon even introducing a foie gras poutine to his menu in 2002. This, noted Théorêt, launched a “bourgeoisation” of the dish, with versions that occasionally depart quite far from the original, subbing curry sauce for gravy or vegan cheese for cheese curds.

But while of the three main ingredients, the hardest to replace entirely is the fries, Théorêt doesn’t think they’re necessarily more important than either of the other elements.

“They’re the base,” he said. “They’re indispensable, but they’re not the most important.”

The British staple of fish and chips is yet another contender for the most emblematic fried-potato dish. While chips are slightly different from fries, particularly with regards to their shape, the similarities between the two are incontestable.

In 1928, The New York Times declared fish and chips ‘England’s hot dog’, and while the chip portion could certainly be seen as more of a side than the main event, it’s perhaps no accident that purveyors of the dish are known as ‘chippies’ rather than ‘fishies’.

As with poutine, modern adaptations of fish and chips at even the most high-end dining establishments have helped the former working-class food to become ‘classless’, according to the Telegraph, “which somewhat increases its credibility as our national dish.”

In France, the fry’s upward movement happened much earlier, with suggestions for pairing the fried potatoes with grilled meat, à la French classic steak-frites, appearing as early as the 18th Century. France also spawned a version that still bears the name of the ostensible original – the pomme Pont-Neuf. Cut into a perfect rectangle, the pomme Pont-Neuf may boast a more striking aesthetic, but it also creates more waste and is thus more aligned with haute cuisine than with everyday food.

At Parisian establishment Pont-Neuf – La Frite Française, however, this eponymous cut is not used. Rather, these fries are somewhere between a shoestring and a wider chip and, according to co-founder Jean-Paul Lubot, are truly ‘French’ fries.

The Frenchness of these frites comes, first and foremost, from their origins: French ingredients, including local potatoes delivered straight to the restaurant, the variety of which changes according to the season.

“In Paris, it’s hard to eat good fries,” said Lubot, noting that his vision for Pont-Neuf was not a chip shop, but ‘a chip boutique’ that would combat the fried-from-frozen fries that too often plague the capital.

“Our approach,” he explained, “is to make a high-end fry.”

‘Sides’ here include local Paris ham, shrimp croquettes or meats from Boucherie Metzger, one of Paris’ top butchers. The potatoes, meanwhile, are hand-peeled and cut fresh daily before being double-fried in beef tallow: first in the morning, and then once more, just before serving.

“As far as we’re concerned, it’s possible to make a French fry as good as the Belgian fry,” Lubot said.

The Belgian fry, then, remains the reference of quality, the one to beat, even for these very French fry makers. This is, perhaps, no surprise.

After all, in a world where fries are often relegated to a mere side dish for burgers, steak or fish, or a base for gravy and cheese, it’s only in Belgium that fries truly are a meal unto themselves: traditionally made from the Dutch Bintje potato, these fries are always double-fried in beef tallow (never oil), piled into a paper cone with a touch of mayonnaise, and purchased from frietkot, or simple mobile fry stalls.

A recent endeavour to revitalise these staples of the Belgian capital spawned a plan to revamp about eight frietkot to the tune of 50,000 euro each. Some found this idea hard to swallow; even Thomas Hick, the architect behind the new frietkots, told The Guardian that the change was “contentious”.

“The frietkots are old and ramshackle and it’s something we like about Brussels,” he said. “No fuss. As opposed to the French way – the Belgians are more raw in the way they eat frites.”

“I think that Belgians can, very easily, eat fries on their own,” Verdeyen said.

Maybe this is what makes all the difference.

I don’t remember ever consuming them in Belgium, but the best “French” fries I ever had were in a fish restaurant in Amsterdam.

In NL they are fried in oil. Real Belgian fries must be fried in beef tallow. Once we asked the owner of the chip shop in Belgium if he used horse fat/tallow, he said “no!”.

I eat a small cone almost every weekend at the market fry stall, they use oil.

American soldiers, stationed in the francophone region during World War I, allegedly dubbed the potatoes ‘French fries’, and the common (if slightly imprecise) moniker was born.

However. And this is a big however. We visited President Jefferson’s house some years back and, during the tour, the subject cropped up. And the tour guide gave us a quote from Jefferson’s letters which refers to him eating “potatoes fried in the French fashion” in Paris.

So, I reckon French fries are very possibly actually French.

However, for fish & chips, I live about 20 miles away from the small town in our metro area where fish & chips are first documented to have been sold together in 1860.

The French would try to claim sushi, tacos, and curry as Parisian if they thought they could get away with it.

Not to mention there’s the whole thing of not being able to deal with the concept that Belgium might have something edible to claim as their own.