I bought these cake pans, and it seems to me (after the fact, of course) that the bottom part may need a water bath or something to keep that part from overbaking . The pan is, of course, upside down in the photo. Does anybody have any experience with this type of pan or should I just use it as a jello mold? 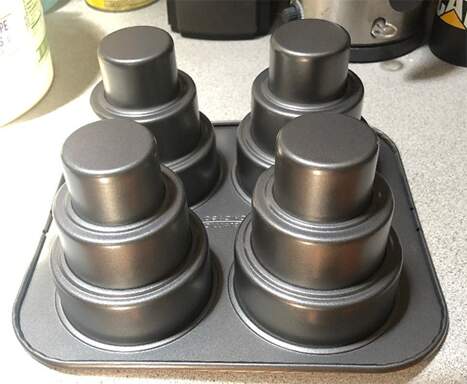 @ewsflash, although I have no direct experience with a type of pan like that, after my years of baking, I’d be inclined to bake a test “batch” filling just one of the wells. I’d then bake at the recommended temp and use a toothpick or skewer to test for test for doneness. For the 1st trial one, I wouldn’t use a water bath. If you’re not happy with the tester sample, I would then try the water bath. Good luck and please report back!

Another thought would be to reduce the temperature 25 degrees and bake it longer to ensure doneness of the three layers.

How big are these? I’m guessing about 4” at the widest part, 2” at the small tier?

If you’re baking a typical cake I wouldn’t recommend a water bath, that would be too much insulation and it wouldn’t brown.

I’d say try it as-is, if the small part over-bakes, try wrapping that part of the pan in wadded up aluminum foil or wet newspaper.

I have magi-cake cloth strips that are supposed to prevent the outsides of cake layers from over-baking before the center is done, you get them wet and wrap them around the pan. So something in that vein could help. Do you happen to have silicone muffin cups?

I use foil “sleeves” to slow down cooking - you could try wrapping the bottom one or two tiers in different amounts of folded over foil to conteol the temp gradation.

Size is about right.
Oh- I think I do have some silicone muffin cups- great idea, I bet they’ll fit perfectly. Also giving it a test run first. I don’t do enough baking (like almost none, my husband is the family baker) to buy the magi-cake strips, but it stands to reason that they’ll be a good thing to have if I end up loving the cake pan.

I’ll try the lowered temperature for my second experiment, good idea. I’m going to have some fun taste-testing my experiments!

These look like a recipe for failure - sorry! I can’t imagine having success if you fill all the wells to the top at once. Off the top of my head, perhaps fill one level at a time. Bake the small layer till almost done, then wrap or use a bath on that layer as you bake a second layer, and repeat for the largest layer. IF that works, it would allow you to use different flavors for each layer.

I can see why you’re asking for advice here. By the looks of things online, the manufactures of these pans don’t even include baking instructions when bought brand new. That speaks volumes to me. Most of the comments are oh it’s so cute! Everyone loved them! People seem more interested in how the finished product looks after decorating than anything else. I too see a problem with even doneness. Frankly, it seems like they’re more trouble trying to get just right than they’re worth. Then again, I’m not a dedicated baker.

What I would try: Fill the final tiers only half way and seal the top with foil. Try and leave some slack – tent it slightly – in case the cake rises higher than the top of the pan. The foil “lid” will create a moist environment, like baking bread in a dutch oven. Two thirds of the way through, carefully remove the foil and finish baking. You may have to cut your leaveners in half.

I have experimented with baking non-bread items inside a dutch oven. Results have been… mixed. Maybe a solution in search of a problem.

Neither am I, but did you check the reviews on Amazon? It would seem it isn’t much of a problem, by the hundreds of positive reviews. Makes me even more curious.

I didn’t check Amazon but now I see what you mean. I did get this email from WM yesterday.

“This item might be gone soon…Too good to pass up…”

Then another one today - “ Still deciding?” 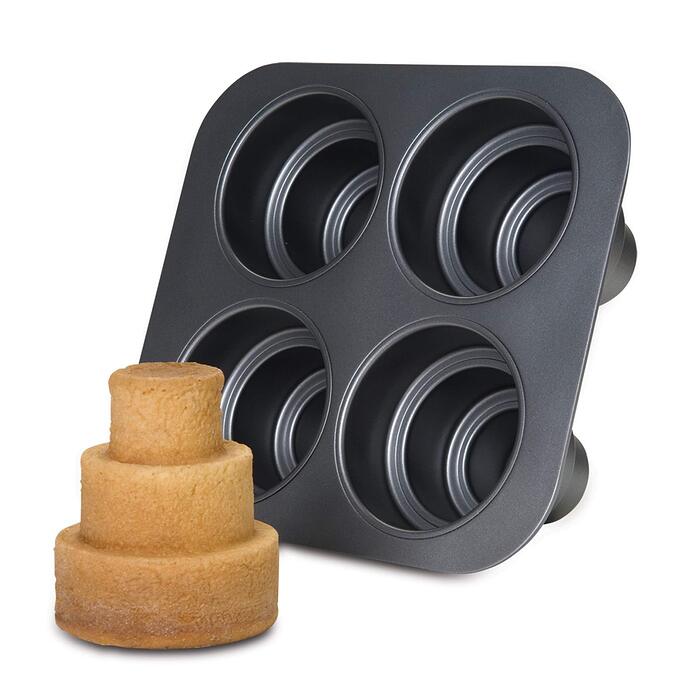 Since it’s commonplace to pay people to post positive reviews, I don’t put much stock in them unless they have specifics. Likewise, many negative posts are dubious and sound like they may be from rivals.

Most of the reviews for this pan are so badly composed that I tend to believe they are genuine, but from buyers who are really inept bakers, or really dopey, or both. Don’t complain about the size when it’s right there in the description you were too careless to read! I WAS surprised that sticking, not uneven baking, was the most common gripe.

FWIW, it’s a lot cheaper on Amazon than Walmart!

Upon closer inspection of the reviews, it does appear that the general consensus is if it pops out in one piece you’ve made a roaring success of it. Like you said, little mention of uneven baking. Although several do suggest how full to fill the pan so it doesn’t overflow. So now we’re sorta right back where we started from.

You’re so right- it’s almost frightening. I’m glad i’m not trying to buy or sell illegal goods online. Did you look it up on WM’s site?
Gods, I hope so

Well, that ship has sailed, but it in my defense, it was probably on sale when I bought it

I feel the same way you do, but there were so many positive reviews I figured most of them were legit.

Well, I made a box cake and filled 2.5 volcanoes. I left a one inch space for two, and the third was barely up to the second tier. Had to add ten minutes to the time before they cake tested. The two fuller ones had a one inch balloon on top, which I shared with my son who was visiting. The less full one was almost up to the top, with a convex top, which I have no problem with. I flipped the pan over and everything released so easily it kind of amazed me. I will test the various layers tomorrow and let you know. By the way- I used Pam spray and coated with cocoa powder instead of flour, as I was taught as a kid, since it was a chocolate cake.

I love the coating withcocoa powder. So many people forget about that, and I think it really adds to the overall look, plus tasting good!

Though counterintuitive, fat plus granulated sugar is also a tasty, nonstick coating. The sugar forms a crisp caramel shell which releases easily from the pan.