for whatever reason, Cafe Hong Kong fell out of rotation on my weekly dinners in Chinatown. there were no bad meals, no service issues, no back-alley cleanliness issues that kept me away, but still months passed without having been. after a few disappointing meals at Shanghai Heping and 456, I was about ready to give Chinatown a break. so glad i decided to return to Cafe Hong Kong instead.

they’ve opened up the space, tearing down the short wall that divided the room, and added some menu items, two of which I tried on Friday. they now have Braised E-Fu Noodles with Mushrooms, similar but better than my best dish at Amazing 66, and Prince Mushrooms and Beef, not unlike a favorite at Szechuan Gourmet. the peking pork chops were nearly perfect and, though we didn’t order it, the lobster special looked just as good as ever.

I haven’t, but will next time. i don’t typically expect to find Baked Pasta Bolognese in Chinatown and am yet to brave it! how much could i expect it to have in common with the italian dish?

Its half Chinese, half Italian, so not quite the same, but that’s the charm. the question is how good Cafe Hong Kong cooks those Soy Sauce Western dishes since I see that they have a very wide menu beyond HK and cantonese food, probably because of customer demand. 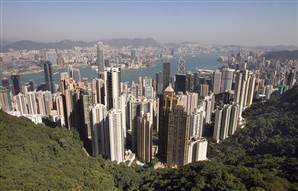 Explore the world of Canto-Western cuisine

In a nod to steak house tradition, sirloins served at Hong Kong's Goldfinch Restaurant are accompanied by a sauce and a side. But don't go looking for American-style sauce and the ubiquitous baked potato with sour cream.

It’s good to hear that Cafe Hong Kong has enlarged and is as good as ever. I haven’t been there for some time, either. If I were closer to Chinatown, I’d go there for lunch specials, but since I’m in the East Village, there’s Hot Kitchen for that. Dinner there requires a few friends to share their big dishes.

They have their lunch specials on the weekend too!

I love this place, so, so much.

ck, you had me curious, so i returned to Cafe Hong Kong on sunday and ordered Baked Portuguese Chicken Pasta. expectations were low and were not exceeded. i finished the dish, but didn’t have much help from my other half. the chicken was too soft, as was the pasta, and the sauce was like Wondra & water. it seemed more like something you’d find at a mid-western diner than in Hong Kong, though, that probably has a lot to do with my lack of knowledge on Hong Kong cuisine. in any case, i don’t think i’ll be trying another baked pasta dish there.

Ouch- sorry you took one for the team. That sounded terrible. Perhaps HK dishes are not their forte. Sounds like its better to stick with the other dishes.

I am not surprised by the softness of the pasta though. Al dente at soy sauce western restaurants is unheard of. At their best, while these dishes may be foreign in texture and technique to people outside HK, but the taste shouldn’t be bad at all.

as chorkpop mentioned, they have lunch specials all week, so the hit didn’t hurt too bad. I think the dish was $8.50, so no big loss. as i said, i did finish the whole thing so it’s not that it tasted bad. it just wasn’t good. i’d be curious to hear from someone who’s more familiar with the style. honestly, i don’t imagine it’s ever too good.

As someone whose family comes from HK (and I return frequently, though I’m a born and bred NYer), I never got the appeal of a lot of the HK western-style of cooking that features baked dishes and spaghetti/macaroni - I think there’s a comfort factor to it, so I suppose when the hankering strikes… though I think Cha Chaan Teng would be a better place for those types of dishes.

I go to Cafe HK primarily for its Cantonese cooking: the steamed fish (jing wan yu) never fails to please; casseroles are nice and hearty; the fragrant garlic fried chicken for when you want something salty and pungent; and any variety of fried pork chop (salt + pepper, Peking style (ging-doh gwut)) are all solid in my book. Also, any simply prepared garlic-stir fried vegetable has always been good.

Those braised e-fu noodles with mushrooms have always been on the menu: it’s one of my go-to dishes there. The pan fried noodles are great, too: wok hay a’plenty.