Any reports on Bywater, Kinch’s NOLA thing in Los Gatos?

Thinking of taking the parents this weekend, but a little disturbed by Ylp reviews. Of course it’s Ylp and I shouldn’t be overly concerned… but…

Review with some photos.

I had a few items at The Bywater. Photo stream: 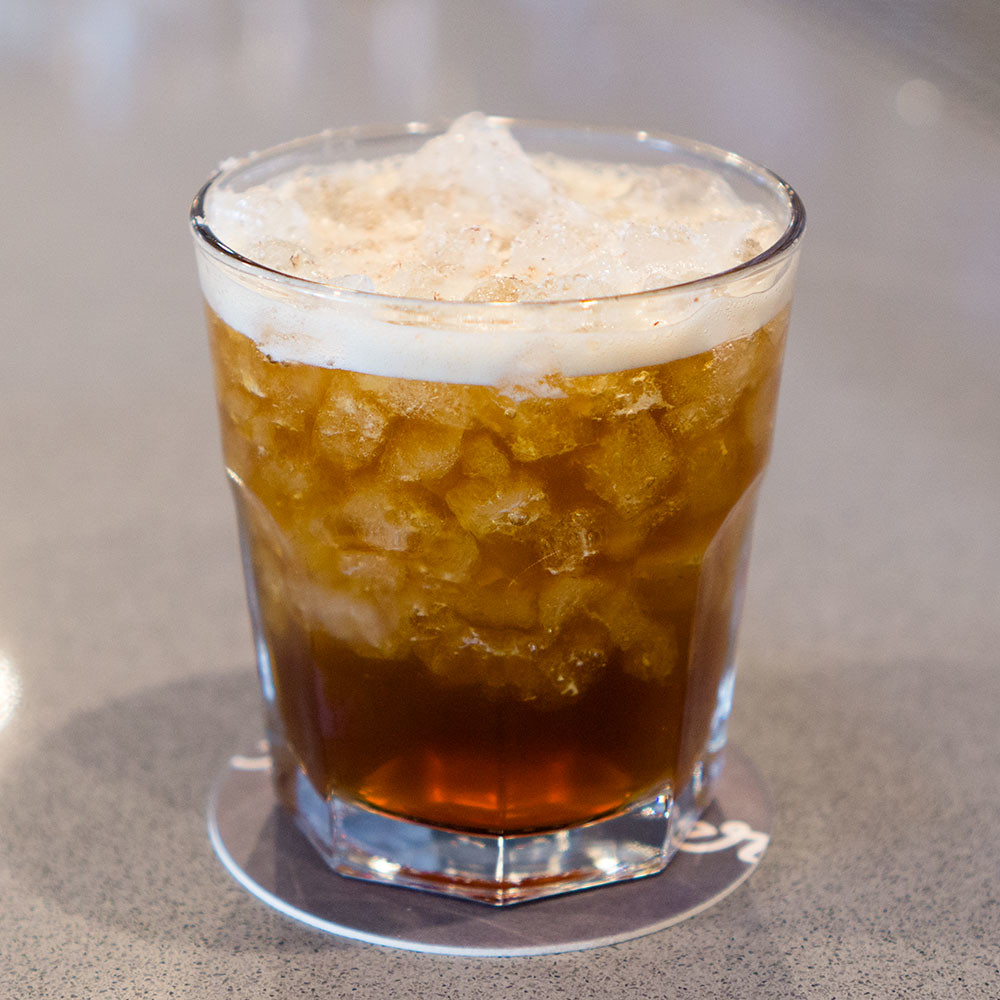 I was sitting at the bar, waiting for my order, and I got a whiff of very strong sewer stench. I asked the bartender about it, and she said “Oh yea, that comes up through the drainage grate on the floor behind the bar. I guess we need to flush it.” I moved to the patio.

Thanks! Sounds worth a trip.

Re: beignets, I thought the ones at Poor House Bistro were in line with Cafe Du Monde. Du Monde’s was better, sure, but they are proper square things with layers, not doughnut holes.

The beignets at Poor House Bistro in San Jose are ok, but I find them to be too dense in the middle: 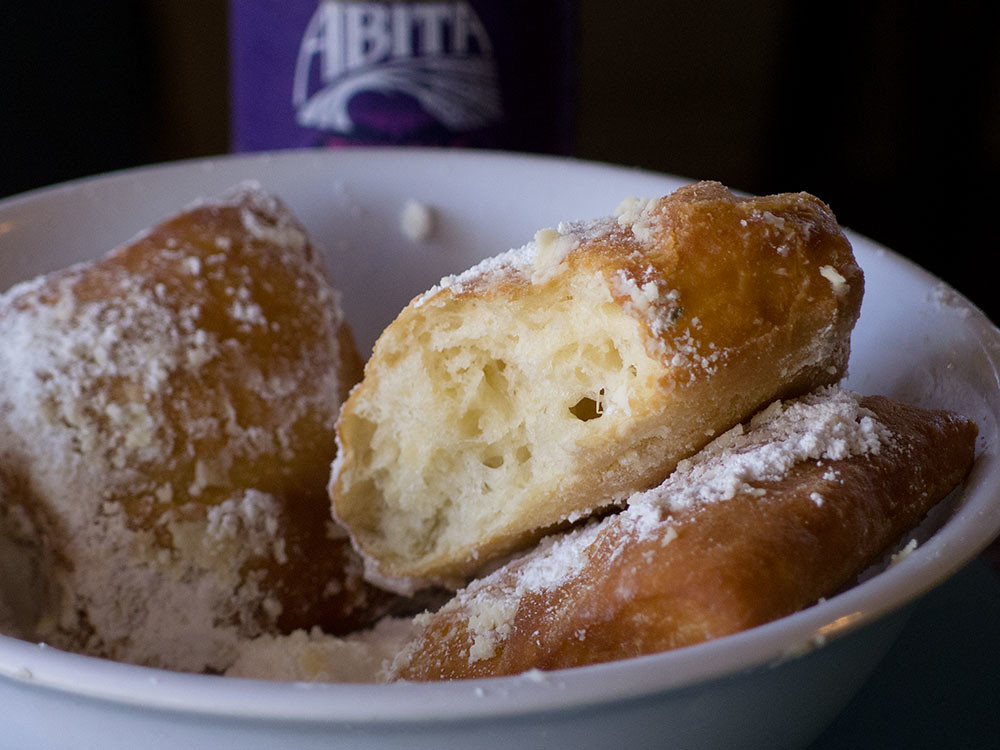 The best I’ve had in the bay area are from Just For You Cafe in San Francisco: 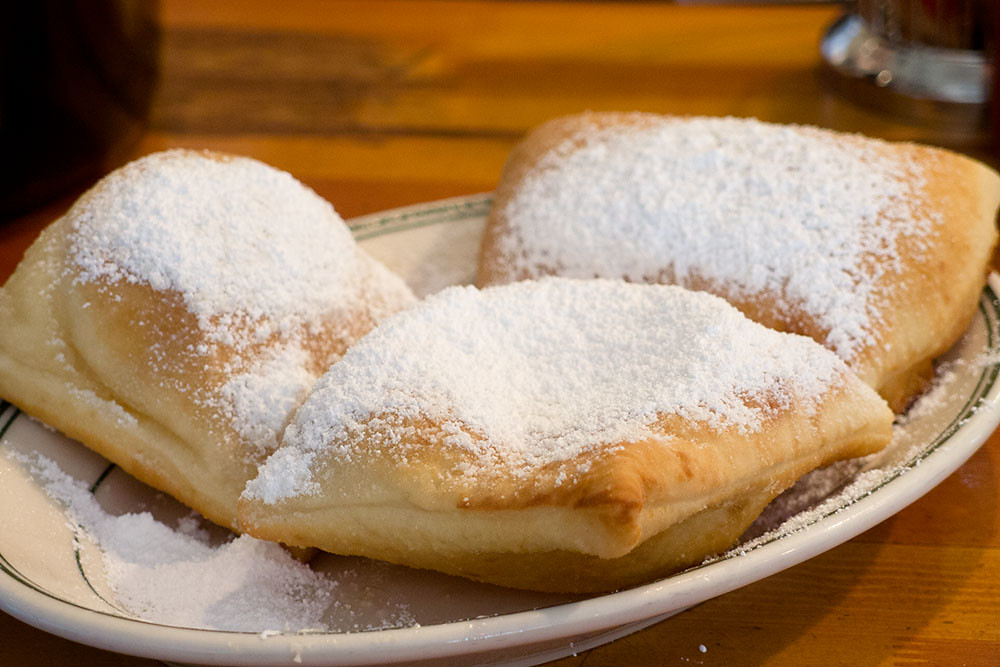 And, a close second, Angeline’s Louisiana Kitchen in Berkeley. They come in a huge bowl buried in powdered sugar, so don’t do what I did:

Also, be aware that there is a large parking lot behind The Bywater: No one seems to know about it, so it’s always empty. If you go on Fri/Sat, call to ask for the wait time before you go: When they opened, it was crazy.

Second the recommendation for beignets at Just for You. I’m married to a New Orleanian, and that’s our go-to.

Been to Bywater twice. Lunch both times.

While it’s not up to the level of, say, Domilise’s, or (to be sure) Cochon Butcher or Killer Poboys, I find it a worthwhile stop if I’m in the area. For example, we had to drive from Berkeley down to Santa Cruz to pick up our daughter’s stuff as she moves back home for the summer, and stopped there for lunch on this past Thursday.

I haven’t experienced the “soggy” po’boy, but I find them to be perhaps the weakest of the lunchtime offerings. Good, but nothing to get overly excited about. I much prefer their appetizers/starters.

Arrived at about 5:15, was offered my choice of an inside table or an outside table. Chose outside. Inside is very, very chilled in a nice way.

Oysters - best I’ve had at a restaurant in a long time. I’ve gotten out of the habit of eating them… these were good. Various west coast.

Rich Man’s red beans and rice. Big boudin blanc in the middle. Was very good but not a dish I love.

Shrimp boil - special. FULLY AWESOME. Not sure how they get that much spice all up in the shrimp, and the shrimp were perfect. And by perfect… man, I love a good shrimp and am meh on average shrimp.

Gumbo - another “oh, that’s what gumbo is” dish. Thick with greens ( okra and collard, I think ), and just RICH.

Some kind of new dish with duck. Complicated, more like “california food”, but very well executed.

Did not try the po boy.

Beignets - yes, these were not the real thing. Even though what they made was really good, and perhaps better than beignets, they are not actually beignets. If you don’t want to hump all the way up to Just For You I still recommend Poor House Bistro in SJ.

Overall - very much a “actual new orleans place” instead of a “let’s try to be new orleans”. I only read in an article later that Kinch worked at Commander’s Palace.

After the first time (and wearing black) to Cafe du Monde, we made black the “traditional” dress code to maintain subsequent visits’ festiveness.

Gumbo - another “oh, that’s what gumbo is” dish. Thick with greens ( okra and collard, I think ), and just RICH.

Gumbo was not just rich, it was intense on the senses too. The andouille sausage added a good amount of heat to the concentrated flavor from the stock. Like @bbulkow said, it was very rich and between the two of us we finished about half at the restaurant. I heat up a tablespoonful of the leftover gumbo today, and the aroma permeated the entire break room and attracted compliments. No I didn’t cook that gumbo… 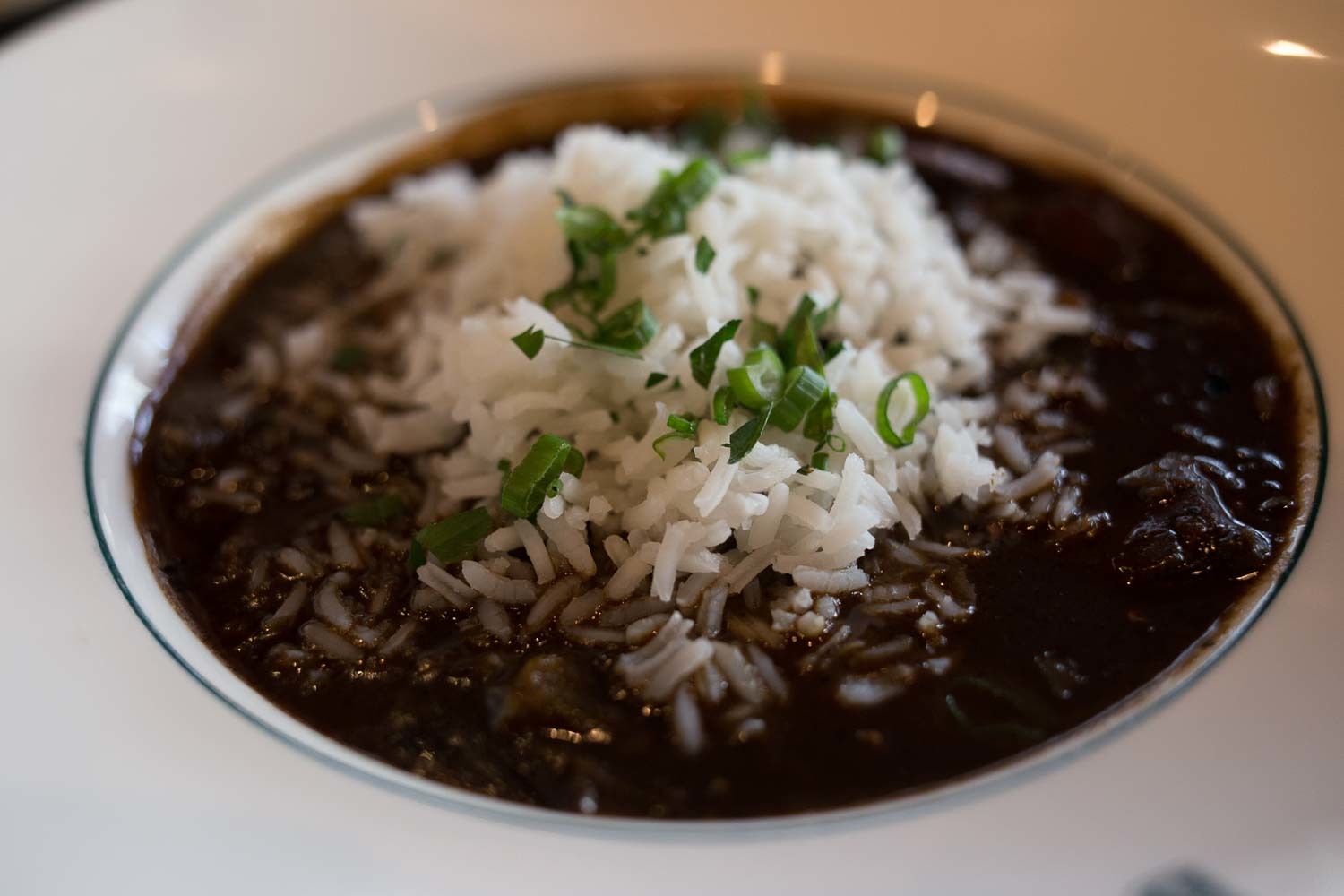 Warned by the server that the shrimps came in shells and all. No worries- broke out the ‘Chinese restaurant whole shrimp eating protocol’, licked the BBQ seasoning off the shells and disassembled the large shrimps by hand, sucked the head. With that said, while the BBQ seasoning was enjoyable, the flavors of the shrimp inside and the seasoning outside was distinctly separate and didn’t meld. I enjoyed the gumbo more. 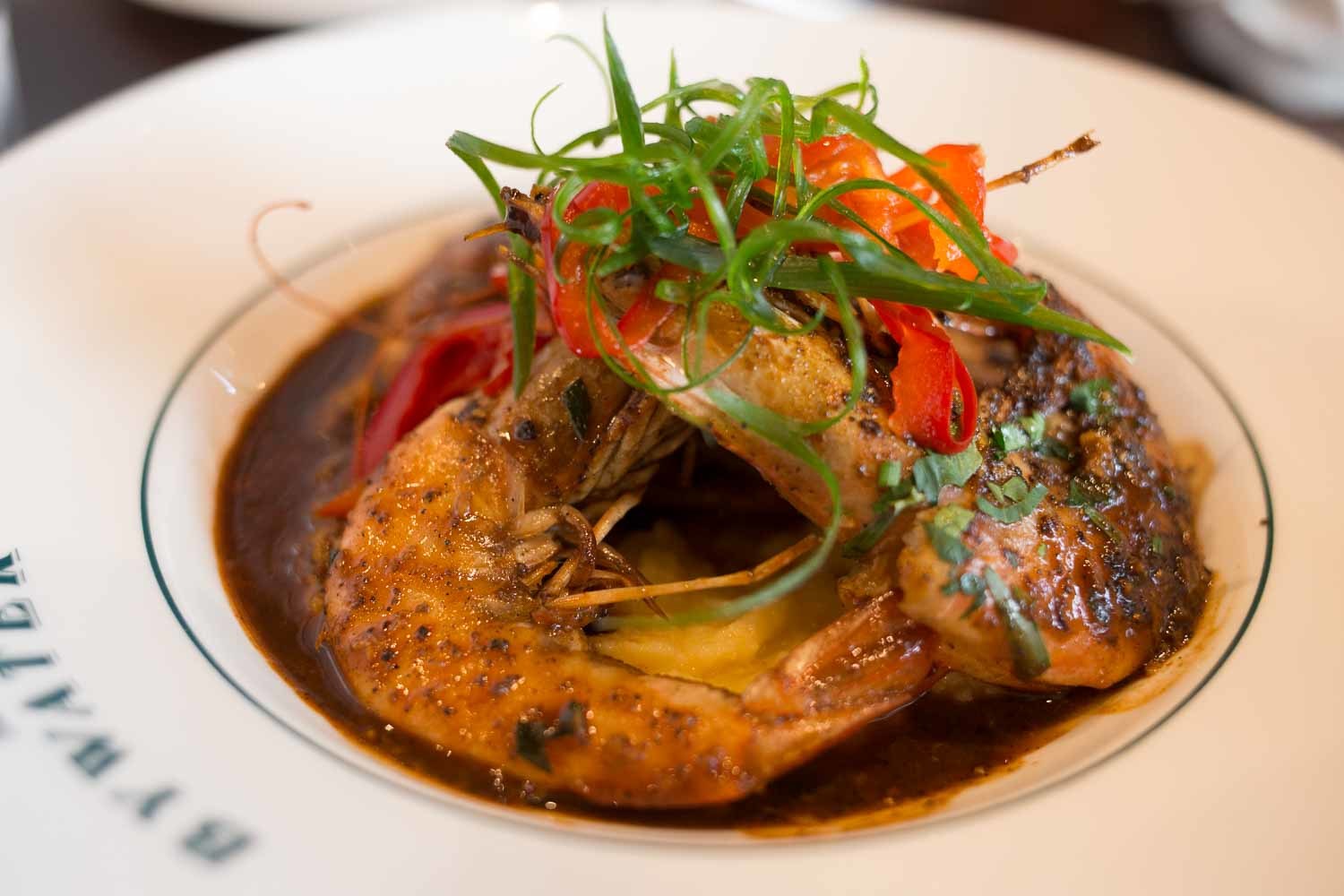 Braised and pulled short ribs at the bottom of the ramaken, mashed potato in the middle and a layer of crusty cheese at the top. It was a comfy little dish for the kids but didn’t stand out. 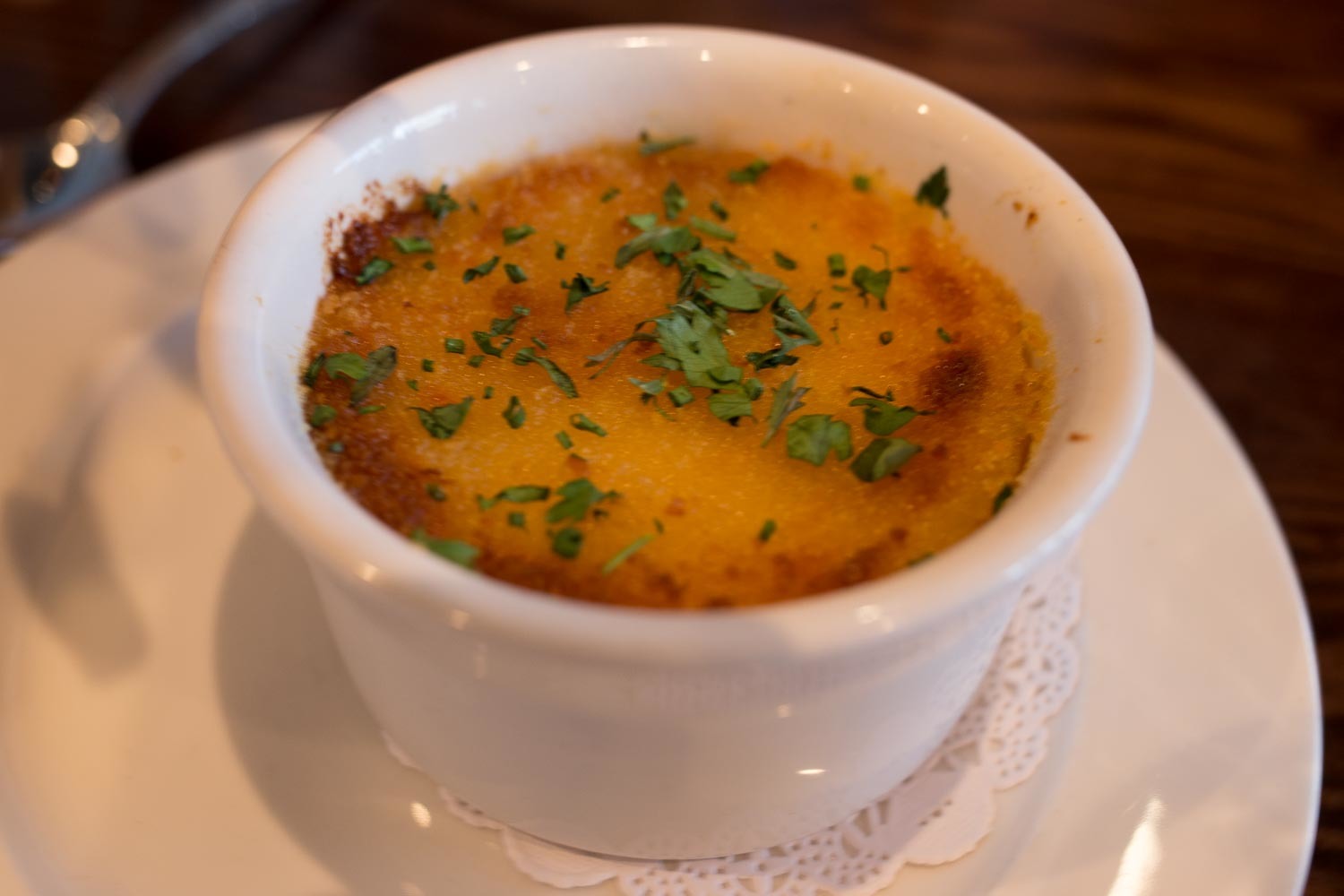 Soup was condensed and intense in squash flavor. What made the soup click was the smoked creme fraiche. There was a layer of pecan breadcrumb. The soup seemed kinda Californian, though. 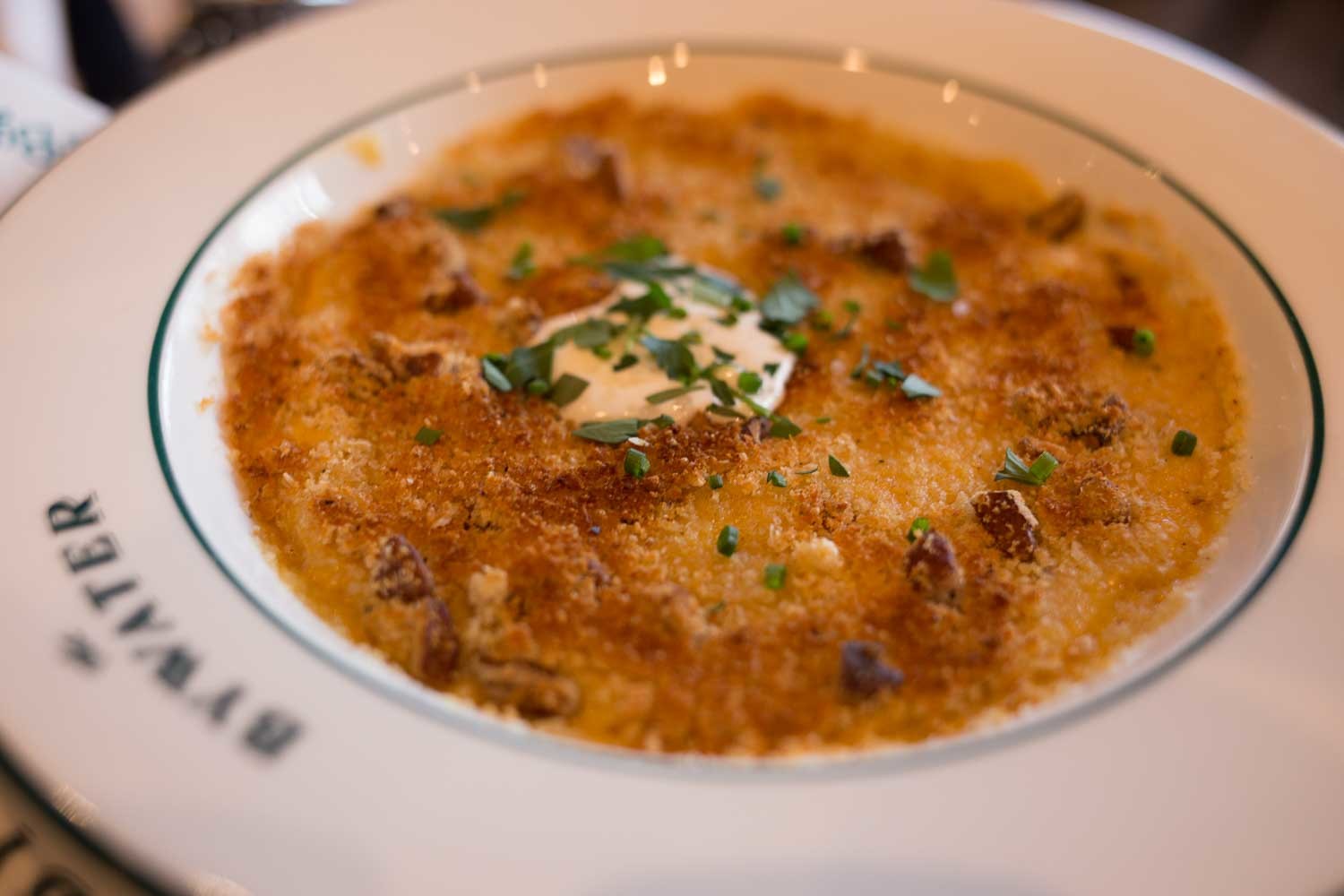 Quite enjoyed the Bayou Buck with vodka.

Kinch was in the house. 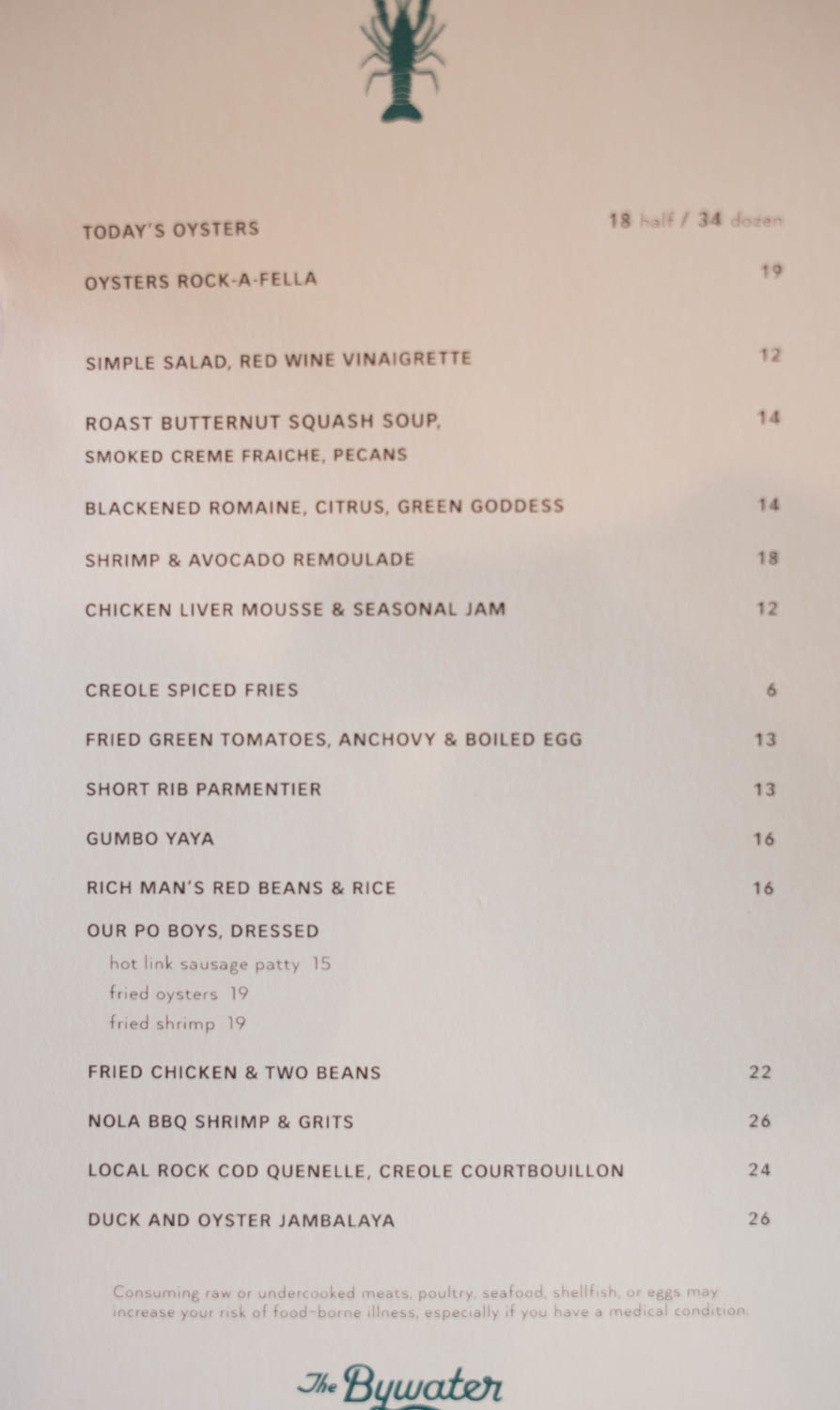 Which dishes are your favorites?

Po-boy at the bar is great. The po-boy is a greatly maligned sandwich, but when done right has that same fresh french bread crust as a proper bahn-mi. It’s also light, with just a bit of meat and a few slices of bread. At Bywater, the fried oysters are incredibly flavorful and have that perfection of still being almost raw in the middle while being hot and crisp on the outside.

This place can make a strong claim to that genre of restaurants a chef founded because it’s the kind of place he wants to eat at. After a long day, coming off shift, a shot of whiskey and a cold beer and a po-boy hits the spot.

Everything else I’ve had there has been very good as well, but that Po-boy is what made me write.

Very good and very expensive. Been five times and have enjoyed the food, bar and service. Oysters are wonderful and you pay for it, a dozen Marin Gems were $42. Some of the best raw oysters I can recall. Oysters Rockefeller (not sure of the type of these) too and I am not usually a fan of cooked oysters. Coffee is very good as well, actually has chicory in it, very hard to find around here. Avoid summer weekends as the Los Gatos beach traffic is unbearable.