Popped down to Westport yesterday to hang out at Buzzards Bay Brewery. Fancheezical food truck was there as usual. My provolone/tomato/basil and B’s chicken and I-dunno-what-else were both awesome. There’s nothing better than a grilled cheese done well, on lofty Texas toast, with fresh beer and crisp prosecco to quench the thirst. We love their pickles so we brought home a quart of jalapeños and a pint of dill pickles. Music started at 4 pm, which was a fantastic bluesy guitarist but we left at 4:30 on for a pit stop at Horseneck.

Then onto Red Dory, a trip I’ve been dreaming about ever since Steve Johnson left town. Place was jumping around 6 pm and it seems many tables inside are held for reservations. We managed to nab an outdoor corner table on the bench that runs the length of the deck - perfect for keeping a restless spring onion corralled. Ever look at a menu and want to order one of everything? This was us. However, since we planned a bit poorly (we should have split a grilled cheese) we only got the wonderfully piquant (but small…we had taken a couple of bites before I remembered to take a photo) ceviche, beautifully charred RI squid with borlotti beans (a variant on something we’d ordered and loved at Rendezvous), and grilled Florida shell-on white shrimp with a spicy zesty sauce coating them (we ate them shell and all). When I saw pork-veal meatballs in one of the pasta dishes, we asked if we could get a couple for spring onion. Steve (who we found out was cooking that night) sent out 6 and spring onion went to town on them and the bread that comes out without asking (handy for sopping up all the kickass sauces). Food was being run by either a nice young man or a guy whom I know I’ve seen before in Boston. We chatted for a while - he worked at Biba back in the day. He talked about how Steve forced him out of retirement so they could finally work together. It was clear how happy he and Steve are at their new gig, 2 old friends working side-by-side in the kitchen. He told us to poke our heads in to say hi to Steve but we demurred - I’m sure he was plenty busy. Of course, we got to talking too much, I didn’t get his name.

While the whole light meal was wonderful, the kicker for me was dessert. I am NOT a dessert person - I have almost no sweet tooth…except for the lemon buttermilk pudding with huckleberry sauce that I used to always get at Rendezvous. And the person who was also a fellow dessert-hater but who turned me onto that pudding? Yumyum. So, B and I savored every bite with yumyum firmly in our thoughts as the sun set over the Sakonnet. We will undoubtedly be back soon. 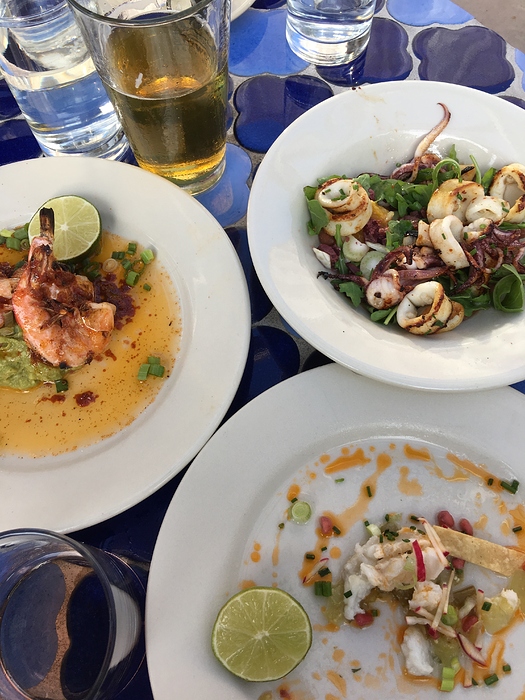 .except for the lemon buttermilk pudding with huckleberry sauce

One of my top ten reasons to live. I really dislike desserts generally… give me one of the spring onion’s meatballs over dessert anytime… except that astonishing pudding.

Great report. Heading down to Westport to look at some land later this week. A stop at Red Dory is on the itinerary!

Such a beautiful report, digga. I’m hoping to get there this season when we visit a friend who spends a month in Sakonnet. And what a beautiful tribute to our beloved yumyum.

oh, I so wish to visit Red Dory, while still missing Rendezvous! Sounds wonderful for Steve and his friend, and for your family. I love hearing about your spring onion’s adventures.

yeah, sometimes I got a bit bored with the same roster of desserts year after year at Rendezvous, and I hardly ever eat dessert anyway, but that buttermilk pudding is amazing.

Your report made me want to get in the car and head to Westport (though this weekend’s delayed chores stopped that). You have inspired happy thoughts of tasting excursions to local breweries on future weekend afternoons.

What a terrific report, felt that I was sitting right there with you, tasting everything.

Thanks for the report - everything I’d hoped. We miss Steve and Rendezvous, so it’s time to truck on down to Tiverton. How about the bar - does he still have that cucumber/gin concoction?

does he still have that cucumber/gin concoction?

I believe so although we are not usually cocktail drinkers so I didn’t pay attention. I’m sure you’ll find some thing to quench your thirst. Hope you make it down there!