Amber has always been my favorite Indian restaurant in the Bay Area, and their Butter Chicken has always been my favorite dish there. Even after moving away from the Bay Area, we used to go back to the original restaurant in Mountain View (since we often stayed nearby). It’s a staple at their lunch buffet, and although we tried many other dishes, the butter chicken was our favorite, both in Mountain View, and later at their downtown SF location. The SF version was somewhat different (consistently hotter), but was still a wonderful dish.

It had been almost three years since I’d had it last, and meanwhile in April, I reviewed Sukhi’s Chicken Tikka Masala on the Costco thread (on FTC). Reading back, I’m embarrassed to say that I compared it favorably to Amber’s butter chicken. Clearly it had just been too long since I’d been to Amber.

Last week, I was working at a conference in Santa Clara, stuck at a local hotel with no car. It occurred to me that I could order my beloved Butter Chicken from the Amber at Santana Row in San Jose, and have it delivered by Uber Eats. I’d forgotten how transcendent the dish was – it almost brought me to tears. Super-tender tandoori chicken, in a sauce that was incredibly complex and flavorful. I was in food nirvana for hours after, and I’m still thinking about it. Highly recommended.

Note to self: When staying at a hotel, and ordering through delivery services, always specify utensils and napkins, none of which were included with the delivery (luckily I had my own utensils). Also specify extra sauce. (When I used to serve myself at their buffet, I would get additional sauce for the naan.)

I went to Amber for the first time last month and was impressed by the quality of the buffet in general, not just the Butter Chicken. $21 per person isn’t bad all things considered.

I went to Amber for the first time last month…

Which location did you go to?

The Santana Row one.

Is there a difference in quality between the Mountain View/ Los Altos location and the Santana Row location?

This is the first time I’ve eaten food from the Santana Row location. I’ve previously eaten in both SF and Mountain View, and they can vary somewhat from time to time (SF’s butter chicken has been consistently spicier than MV’s). This seemed like the best I’ve had yet, but again, since I haven’t had it in three years, it’s hard to judge accurately.

I alternate between the two locations and find the Los Altos location to be more consistent in execution, but ymmv. I dine at Amber 3-4 times a year.

I’ve been cooking a lot of Indian this year and managed to replicate Amber’s madras seafood curry at home, but I still have not been able to pin down a butter chicken as good as Amber’s. I’ve read their recipe posted online, and I’m skeptical if that’s truly their in-house recipe because the spice flavor levels feel far lower than what I taste in person.

Some 15-odd years ago, I was given the (handwritten) recipe by the manager at the old MV location. Can’t locate that any more, but I do remember that it called for jaggery rather than brown sugar. Only the KQED version in the above search uses that, but it’s really only half a recipe, as it starts out with “tandoori chicken”. Also, it calls for 8 jalapenos, vs the red chili powder called for in the other versions. Using fresh jalapenos seems risky to me as they vary so much. Based on how I remember the recipe they gave me (we never got around to making it), the “Food Dictator” or SFGate versions look closest. Bear in mind though, since most people don’t own a tandoor, the recipes provided can only approximate their result.

After a lot more iteration (a dozen times more) on my personal recipe, I finally was able to put out a butter chicken that’s as delicious and complex as Amber’s. I’ll pass on what I feel is important.

The rest of the spices used aren’t as important. I use a healthy amount of store-bought garam masala, kashmiri chili powder, hing, cumin, cardamom, cloves, cinnamon all in whole spice form, but these never got me the “wow” like this time did. It’s really driven mostly by the fenugreek (both kinds), tomatoes and aromatics. 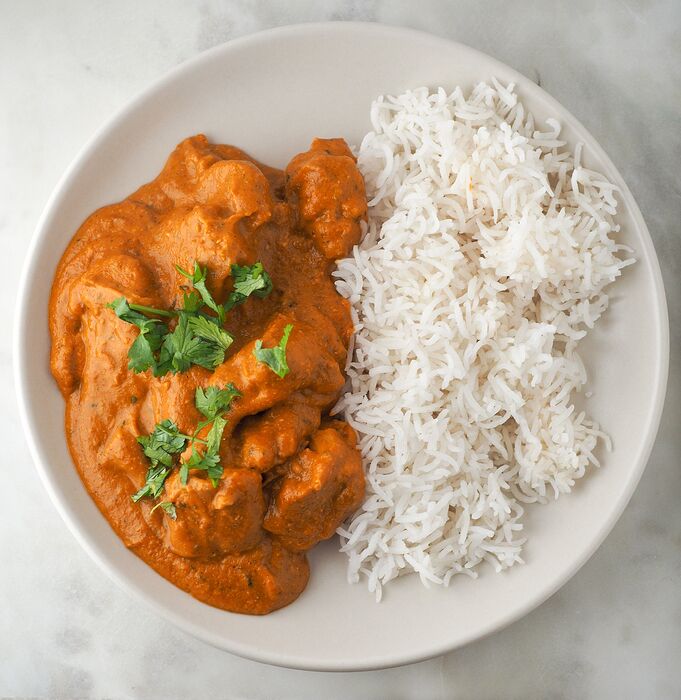 Thanks for sharing! I’d like to make this. Any specific recipe you base your personal recipe on?