Butcher Block Carts/Tables -- Are they only for aesthetic?

[quote=“JoeBabbitt, post:16, topic:4757, full:true”]
That block can be resurfaced to be flat again. …[/quote]
This is what my mom always said about her block. But, like hotoynoodle said, I’ll never do enough damage in my meager kitchen to need it!

RobinJoy, perhaps easily found, but could you actually fit a 6 ft by 2-1/2 ft butcher’s block in your kitchen? Most of these seem much too large to fit in many (or any??) of the homes – English or American – I’ve visited. I do like their appearance, however! I also like the idea that you make them thinner (4" to 6"?) and flip them over to use the other side rather than planing them flat again.

Their refurbished price would also preclude me from acquiring one. However, I might be able to justify $4,350 if I was redoing the entire kitchen & this was becoming one of the new counters! (Or knocking out a wall so that I could make this a central island? These are big enough to require their own postal code!)

I find the zinc butcher tables interesting. Do you know any of the history/purpose behind the use of those?

Well, I’m not a butcher, but my dad was. And I’ve done a little of my own butchery of venison and elk. My great grandmother’s kitchen table (not the dining one) has the marks of cleavers and saws from 125 years ago.

To respond to Chem’s question, my educated guess is that only a minuscule % of the blocks he pictured ever feel a knife, and fewer still are smote with a cleaver, saw or splitting knife. So yes, they’re sold to most non-butchers as decor.

The Boos block posted by Eiron, certainly _could _ be used in a butcher’s shop, but even it is too small for tasks like boning out a front quarter of beef. My dad’s plant’s blocks were about that wide, but at least half again as long.

Here’s what happens to a real butcher’s block over time. 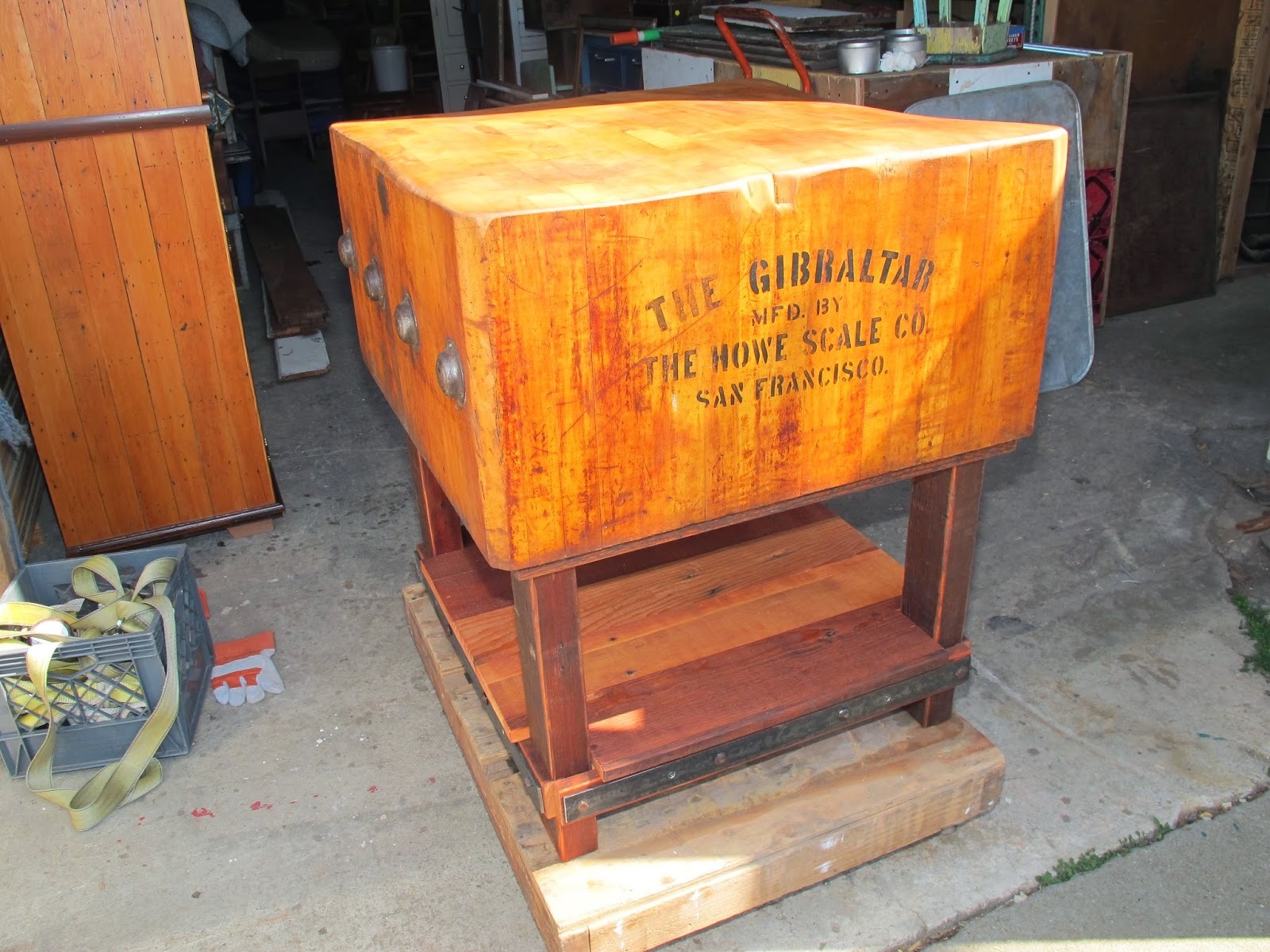 Chem, to address your original question, I think there needs to be a “qualification of definitions”. The discussion in this thread has gravitated towards actual butcher’s blocks, but the items you’re asking about were created with a distinctly different design intent.

Here (in this thread) we’ve been defining “butcher block” (as used in your title) as a thing. However, the items you’re seeing in stores are using the term “butcher block” as a style. Most of the items you’ve shown here do use butcher block (i.e., end grain) construction in their wood tops, & since they’re all wood, they can be used as cutting surfaces. But you’re right, they’re not intended to be used to break down a lamb for Easter Dinner! Prep the salad & casseroles? Sure! Slice bread & fresh fruit? Absolutely! They’re easy on your knives, & they clean up with a sponge.

But here, the function of end grain construction meets up with the marketing department, & the result is a collection of butcher block style prep tables.

I’m with you on size & price, both above my pay grade!

I think the zinc one is more of a work surface than a butcher’s block, not really something I’d cut directly on to.

Kaleo, that’s an awesome butcher’s block! How long will that fuel your wood stove??

I don’t think my kitchen floor would withstand the weight of that thing! Boos lists my block at 135 lbs, & your monster looks to be more than 300 lbs!

I think you’re right, any butcher breaking down large sections of animals would need a larger work surface than what my smaller Boos block provides. I can see the Boos in the front/sales area of a meat department, or behind the glass wall at your local supermarket, where the butcher is trimming cuts to order. Still useful, but limited to finishing cuts rather than primary cuts.

I don’t think my kitchen floor would withstand the weight of that thing!

So what would happen if a 300 lb man walks into your kitchen?

I can see the Boos in the front/sales area of a meat department, or behind the glass wall at your local supermarket,

[quote=“Chemicalkinetics, post:28, topic:4757”]
So what would happen if a 300 lb man walks into your kitchen?[/quote]
Well, if he’s walking on wooden peg-legs, I expect my tiles to crack.

(The previous owners didn’t do a very good job on the tile work; quite a few tiles are already cracked, & a lot of grout popped out when I moved my furniture in.)
Based on Kaleo’s picture & the weights listed on the Boos website, I’m guessing his block weighs somewhere in the 400 lb to 500 lb range.

Which is divided by 4. Like when my horse firmly planted his hoof on Bob’s foot. Being an account undergrad he quickly did the math and hoped that the horse didn’t raise a foot

Here’s my 40+ yr old Boos butcher’s block that I inherited from my mom: 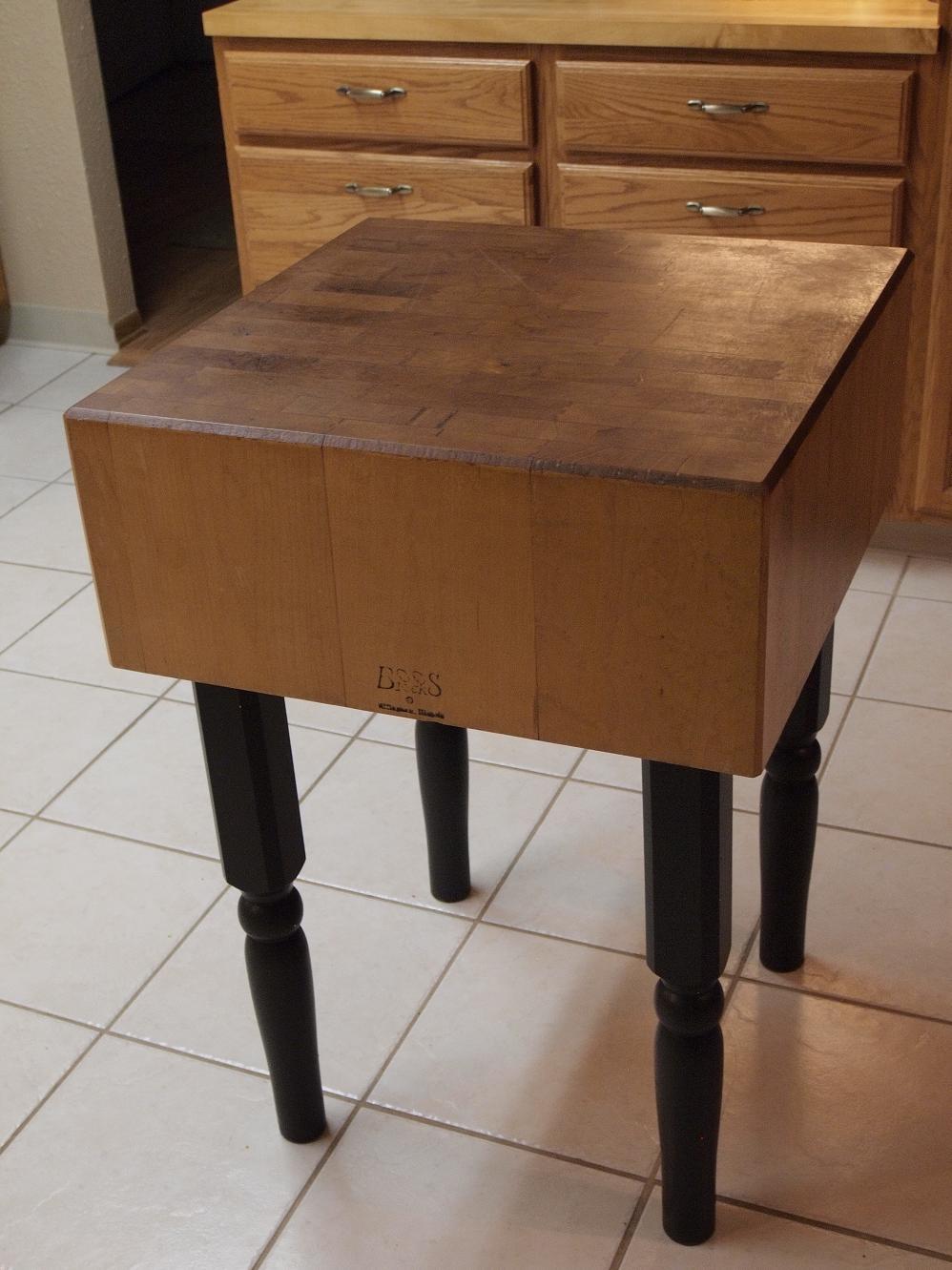 This block is 10" thick with a 24"x24" top size, which is bigger than any of their current 10" thick blocks. I’ve oiled the top 3 or 4 times in the past 8 months, & at this stage it’s fairly absorbent-resistant. Unfortunately, the lack of care over the previous 40+ years has allowed some of the segments to begin separating.

Here’s another picture, this one of the Boos knife holder I bought: 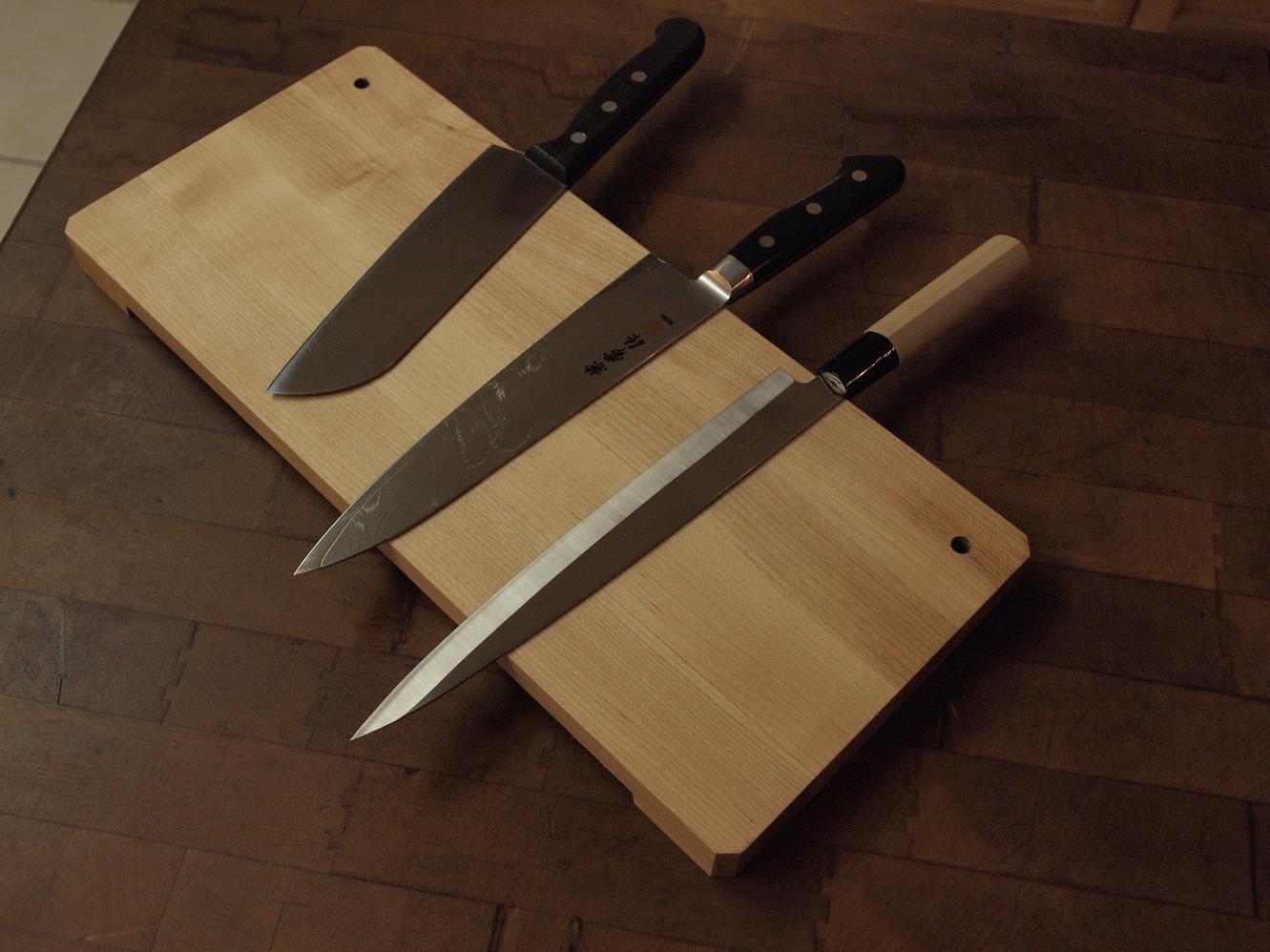 I didn’t realize that the pictures on the Boos website showed the knife holder against 18"-wide blocks, so when I got it I was surprised by it’s relatively small size. The other thing I don’t like is that the longer knife ends will stick out the bottom. I can see this being a hazard if you’ve got curious pets or small children! I’m now thinking that I’ll have a friend make a wider & taller version of this to hold my bigger knives, & I’ll use this one on the opposite side of the block for my smaller utility & paring knives.

This picture also shows off the difference in butcher block construction from Boos’ current technique. This older block used a mix of (mostly) longer slabs, dovetailed together on their short edges. Boos’ current method uses (mostly) square pieces without any joining other than epoxy.

I’ve got a nice 12"x18"x2" BoardSmith cutting board, & another nice 10"x16"x1" Boos cutting board, but after this discussion I think I’m going to do most of my cutting directly on the butcher block!

The other thing I don’t like is that the longer knife ends will stick out the bottom.

I am surprise too. It looks much larger in the official photo (like you said). Moreover, your knives aren’t super-long anyway. My guess is that your Santoku is probably the standard 6"-7.5". This knife holder has problem even holding a 8" knife?!

That block doesn’t look a day over 20 years old !!

Well I stumbled upon such a good deal on this Enclume bakers cart, that I went for it. 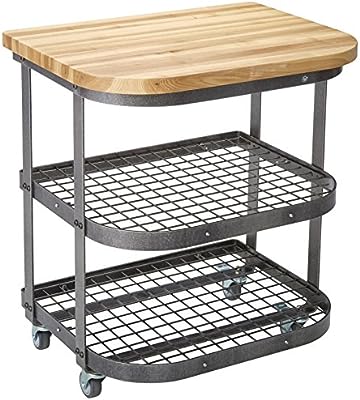 A compact variation of the Baker's Sideboard, the Baker's Cart is packed with all the features, two grid shelves and frame in hammered steel, an eastern Ash butcher block top Plus we've added handles ...

It is great to hear that you stumbled onto such a great deal. Let us know what you think after receiving it.

I wish you’d start a thread about this. Small kitchens for those of us who love to cook would be a great topic IMO.

I have already taken shipment of it, I just haven’t gotten around to putting it together. I will do that soon and post some pics. When this semester finally ends… arrghhh. Man am I tired of 20 yo smart ass Millennials.

BTW Finally picked up decent little camera as well, but haven’t used that yet either.

Finally picked up decent little camera as well, but haven’t used that yet either.

Cool. You can start a new product review thread of this Enclume Baker’s cart.

I would use it as a weapon to toss it against any intruder.