Our work-driven travels took us on to Belgium after Paris, and I was not expecting much. But I had some pleasant surprises. While not destinations, these might be good addresses if you find yourself in similar circumstances.

Osteria Bolognese’s proprietor is from Emilia-Romagna and tries to stay faithful to that tradition. It’s a small place and tends to be booked out a few weeks ahead, but on Wednesdays they take no reservations, so if you show up when they open at 19:00, you can snag a table. Sorry, the light was dim, the photos are bad, but: the food was excellent, and reasonably priced. 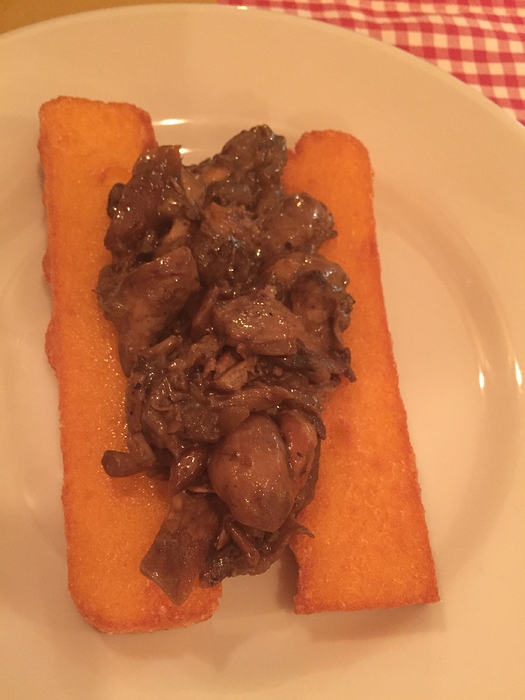 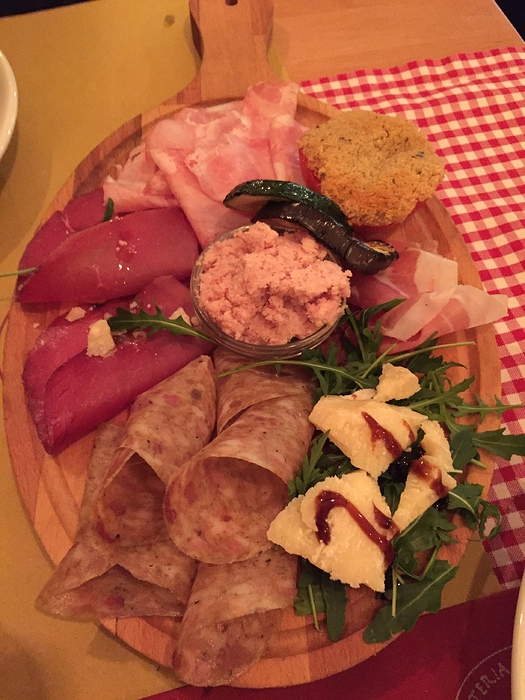 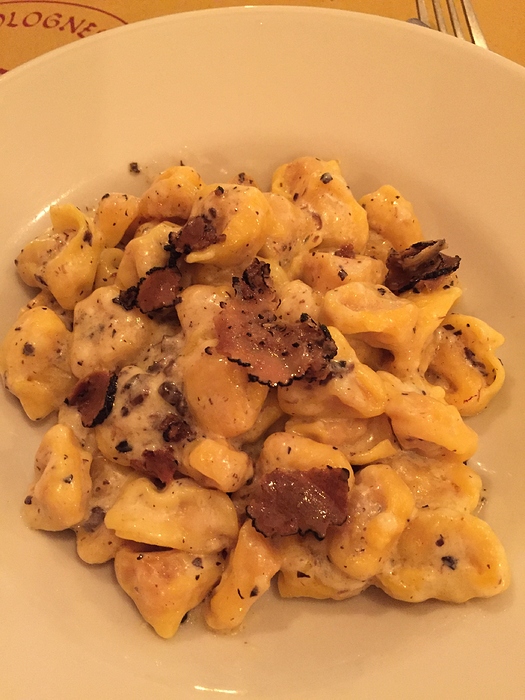 Tagliatelle with ragù Bolognese. I have eaten this in Bologna, and I have spent time recreating it in my own kitchen. This version was dead on. 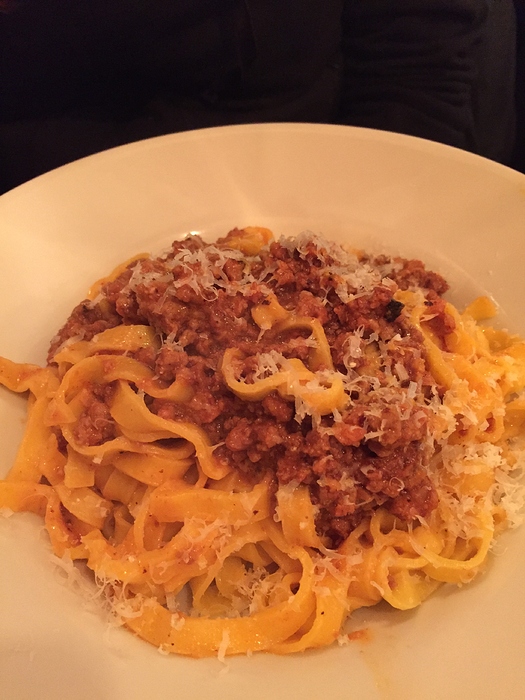 We had no space for dessert, but apparently it is good. One quibble: service was rather slapdash (our server was taking nips from a bottle of beer between forays onto the floor, and was enthusiastic but not really on top of things).

It was just below freezing in Bruges (Brugge); the canals had enough ice on them for ducks to stand on it. There were a few Asian tourists wandering about, but for the most part the place was empty, which I appreciated. I debated eating at Bistro Refter, the second address of the three-starred De Karmeliet, but instead opted for Bistro Pro Deo, at the eastern edge of the historic centre.

I couldn’t have their Stoofvlees op Vlaamse (Flemish beef stew) because it cooks all day, but the beef tartare was on the lunch menu (20 €) and both generous and well-prepared. 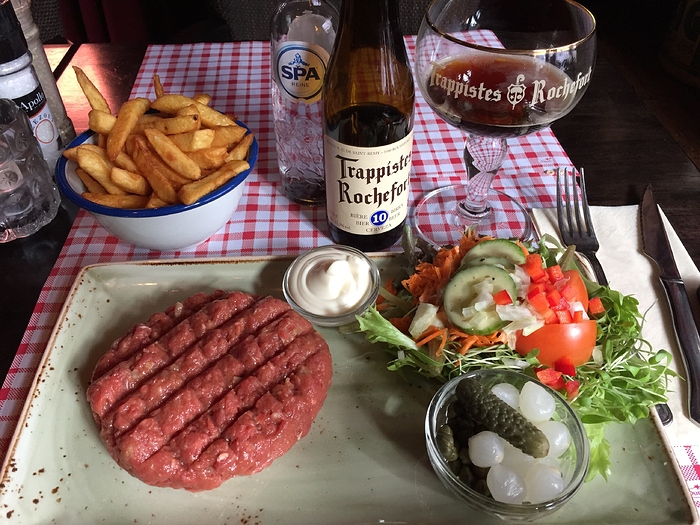 So, given that there was plenty to do in town, I went back for dinner. You can’t tell from the photo, but the stew (same price) was excellent as well. 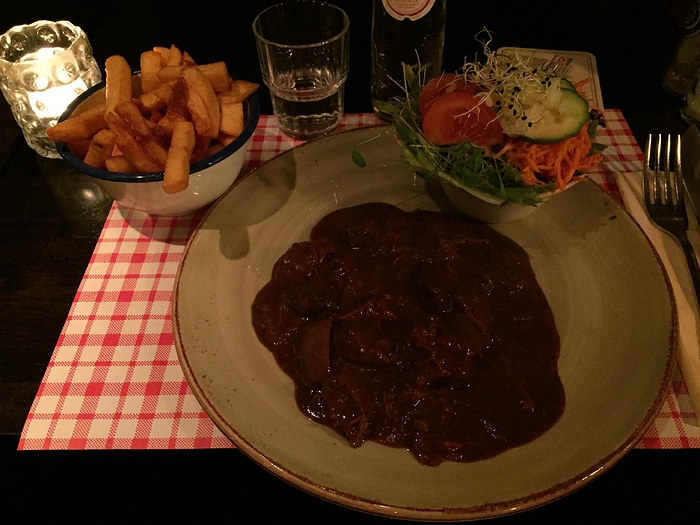 Something I did not know before going: there is no notion of a “carafe d’eau” in Belgium. You want water with your meal, it comes in a bottle and you pay for it.

The next day I went to Ghent (Gent), which has at least as many interesting buildings, but in the middle of a real city with a lot of real inhabitants. My first choice was the one-starred Publiek, but I was turned away without a reservation. Just as well, probably; I was underdressed and would have felt out of place with the minimal bargain menu while everyone else was eating à la carte, but at my second choice, Korenlei Twee, the atmosphere was more relaxed and everyone was having the lunch menu. 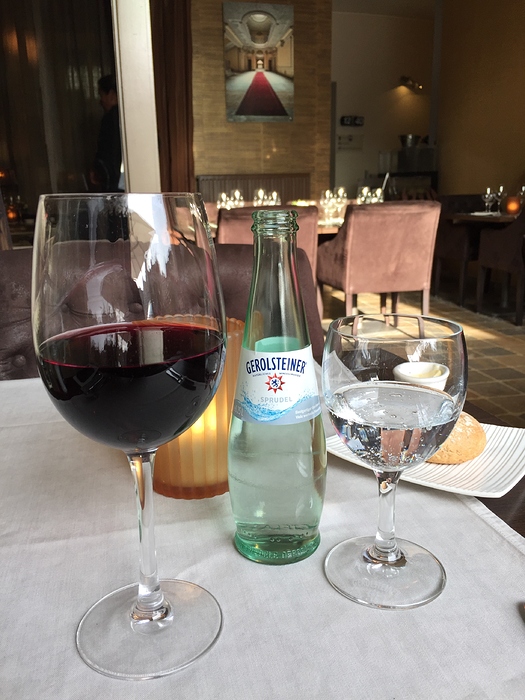 What I had was: five fine de claire oysters; Belgian endive wrapped in ham, in a Gruyère sauce (“very traditional”, the server said), and poffertjes (puffy pancakes) in caramel sauce. 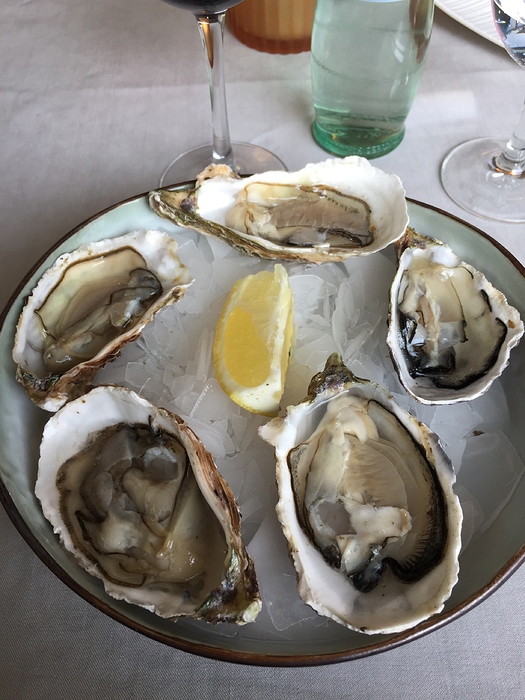 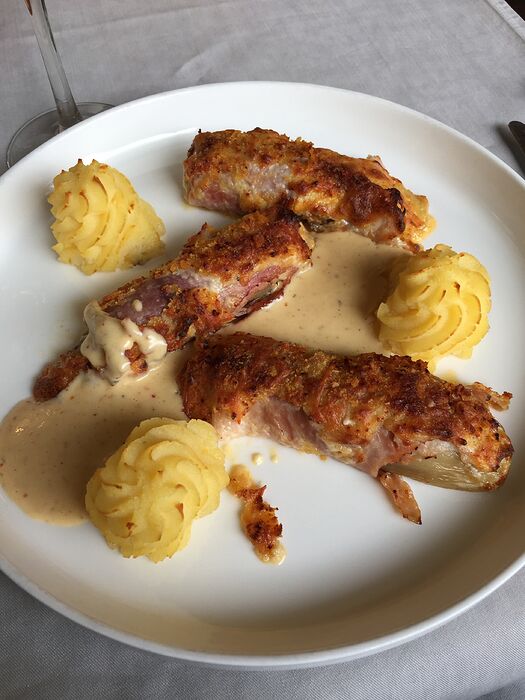 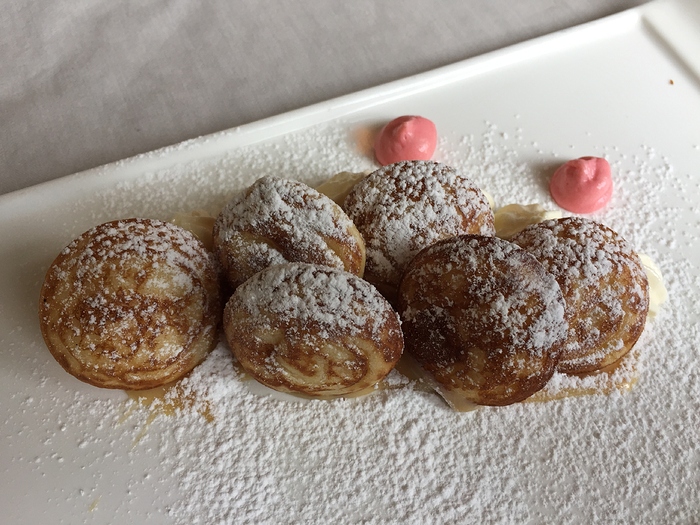 The lunch menu is 24€, and there’s a fine view of the canal and historic buildings.

Back in Brussels, I visited Moeder Lambic twice. It is known for its beer selection (about forty beers on tap), but I had a perfectly reasonable quiche Lorraine and salad for 8€. Friendly and attentive service also. It reminded me a lot of Toronado in SF, except that it isn’t a biker bar playing heavy metal.

Fine de Claire oysters are nice. I used to get them from a whole sale supermarket. Why do they come in 5 and not 6, do you know?

Fancy poffertjes. Though in Netherlands probably nobody eats them after a meal.

Interesting that your water is German. Belgium has its own Spa brand water.

Some pics from my trip some years ago.

Five oysters seemed odd to me. I guess they calculated their profits…

I appreciated the Gerolsteiner! It has more flavour than Spa.

I didn’t find Moeder Lambic touristy, no one else seemed to be speaking English (one woman just had a coffee and was working on a laptop; the servers were speaking French to each other), but I was there in the afternoon, not the evening. I had Cantillon on tap there, and didn’t go to the brewery.

Ah this is really timely. I have some stuff to do in Antwerp later this spring and was looking into making side trips to Ghent and/ or Bruges. May I ask if you have any thoughts on one or the other, or both ? Overnight or a day-trip ?

Publiek is on my radar (for nothing else if not the cute street address ‘39 Ham’) and making a resa shouldn’t be a big deal but I’m not sure if dressy and cost-y is what we’re likely to prefer. De Vitrine is also a maybe although probably not if it is still a Mexican-themed pop-up at the time of our visit.

You should see both, if possible, but if you can only make one, I would say Ghent. I really don’t know why it doesn’t get the attention that Bruges does. Possibly it is deliberately avoiding attention. Day-trips should be possible, transport is quick and relatively frequent, though signage is really lacking; if I didn’t have an iPhone with a data plan, I’m not sure how I would have figured out what to do.

Publiek isn’t really dressy; I just have feelings of inferiority. The people I saw were dressed relatively casually, but it was clear that they were fairly well-to-do. It is definitely pricey, except for the daily lunch menu, which has very limited choice. I was steeling myself to go à la carte.

Well, I’ve been told that the Flemish bits of Belgium are some of the most prosperous in Europe, with folks who like to eat well and dress well, so it sounds like you were in the right place

Anyway you’ve helped confirm my feeling that staying in Ghent and daytripping to Bruges is the way to go (supposedly a 30-min train ride away). One more Q if you don’t mind : was language a problem with menus, ordering and getting about ? (I speak French but no Flemish)

Being anglophone Canadian, I studied French in elementary and secondary school, but have not had much practice, so my comprehension is reasonable but speaking has deteriorated. I didn’t really have to use my French in Belgium; everyone I encountered spoke English, though in a couple of cases I said French was fine, as they were more comfortable in it. Menus were trilingual (except for Osteria Bolognese where it was in Italian, but explained in the language of one’s choice). Some posted menus and signboards I looked at were Flemish only, but I could generally get a sense of things, even if I didn’t know exactly what was on offer.

Trains don’t really have much associated English. In theory everything is done in both Flemish and French, but there might be more of the former. Be warned, Ghent train station is under construction, and everything is confusing; overall, there were many delays and cancellations, and trains changing platforms with little warning. (I was spoiled by Japan!) Trains tended to be listed (in the printed timetable and on electronic boards) by major destinations, so, for example, it was hard to tell in Brussels which trains stopped at Bruges. I had to resort to Google Maps, and I couldn’t always get connectivity on underground platforms. I screwed up a couple of times, but, fortunately, it only meant a delay of ten minutes or so.

I’ll second (or third?) the idea of staying in Ghent and daytripping to Bruges. The train ride is very easy, and we felt one day in Bruges (a daytrip once from Brussels) was enough time. We were in Ghent on another daytrip a few years ago and enjoyed it very much… lots to see and a lovely city to just stroll around.

Thanks for the recs, heading to Brussels and Bruge in a couple of weeks. I always like to find the local eateries and dishes.

I did the fine dining end of the spectrum, as Gert at Hertog Jan is kind of a friend and I’m a huge fan. They grow their own vegetables and flowers. Had a long lunch there so didn’t bother too much with dinner in Bruges.

My mistake was booking dinner at Chambre Separee in Ghent for 7:30pm, which was 3 hours after I finished lunch at Hof van Cleve. This was a 20-course dinner and I had to stuff it in at the end… Overall CS was OK and a decent 1*, but I had been led to believe that this place is amazing.

All the fine dining places we went to were excellent.

Comme Chez Soi has been around for more than 20 years. The food was more modern than expected, and the wine collection is awesome.

L’Air du Temps in Éghezée outside Brussels is also amazing, and a candidate for upgrade to 3*. They also have their own gardens to source ingredients from. http://www.diarygrowingboy.com/2018/06/europe-2018-day-1-country-garden-dining.html

Finally, Sea Grill in the city center was another surprise. Very high level cooking, very modern without being gimmicky.

Gent is home to Chambre Separee - the newish restaurant from Kobe Desramaults. If it is anywhere near as good as his now closed In de Wulf at Dranouter, it should be well worth a visit.

My only other experience of Michelin stardom in Belgium is the 2* Hostellerie St Nicolas at Elverdinge. I cannot give a full report as I became ill during the meal and had to leave halfway through (no fault of theirs - I blame a dodgy mussel in Folkestone the night before). However, the first half of the meal was good, although I prefer even my Michelin food to be less intricate than this was.