Similar to what I did on a nearby board, I figured there are a lot of New Yorkers lurking so I am starting some threads to get the conversations started.

Pete Wells just reviewed this place. What are your opinion on Bruno?

“Justin Slojkowski and Dave Gulino, mill the flour in the basement from whole New York State wheat berries, and ferment it slowly with a sourdough starter…I don’t know another local pizzeria that goes to these lengths.” 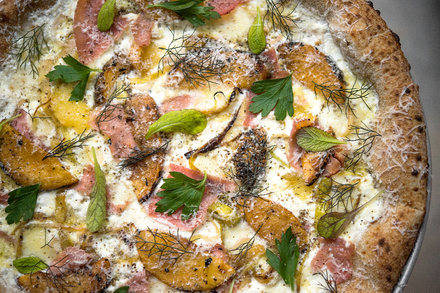 I haven’t been yet, but doesn’t this seem way too early for Wells to be reviewing the place? It’s been open a few months? I feel like they give other restaurants far longer to work out the kinks, on-average…

Wells actually started off his review by discussing exactly that.

"Bruno has a few problems. It’s only been open since July, so maybe it will work them out eventually. I hope so. I don’t want to convict the restaurant’s chefs and owner for these problems because the real killer, as O. J. Simpson would say, is other people.

More accurately, it’s a small group of people like me whose approval can lift some restaurants from the teeming primordial swamp of contenders, and whose premature praise and willingness to play down discomfort and inconvenience enable problems like Bruno’s."

@jba, No, this is not way too early for this place to be reviewed. Wells’s reviews appear approximately three months after a restaurant opens, so this review fits that timeframe since Bruno opened in July. That should be enough time for a restaurant to iron out the kinks. Also, Wells makes multiple visits (I think the minimum is three).

Right after Bruno opened, I read reports that the noise level was insanely high. I immediately took it off my “go to” list because I avoid places with extremely high noise levels like the proverbial plague.

RGR, it’s great to see you. Your presence on Chowhound has been greatly missed.

For whatever it’s worth, when my girlfriend and I went to Bruno, the noise level was relatively high but not close to the insanely high level I’ve experienced at places like Otto.

@Pan, Thanks for the kind words. I’m glad you’re here!

I stopped participating on CH because I finally got thoroughly disgusted with the moderators barring me from posting about restaurants where my husband and I are friends of the house while still allowing others who are also foth in those same restaurants to continue posting about them. My decision also followed a ridiculous temporary suspension. I have been lurking and getting a real kick out of the brouhaha over the new format. I’m thrilled that it led to the creation of this forum (and Food Talk Central which I’ve also joined) so that I can once again converse with all my CH pals.

As far as the noise level at Bruno goes, a very close friend of mine had dinner there recently and told me I would be miserable there. So, my tolerance is probably much lower than yours. Frankly, with so many other great places we go to for pizza. I won’t miss it. Oh, and I’ve never been to Otto.

P.S. The irony about the mods banning me is that they recently changed the rules to allow friends of the house and restaurant owners to post as long as they are up front about the connection. But as far as I was concerned – too late! No way was I going back.

That’s completely ridiculous. What idiots! I don’t remember anyone ever questioning your good faith as a poster, and you were always so helpful to people asking for advice! They are fools.

Otto’s food is very good, but you should definitely stay away.

@Pan, The “excuse” the moderators gave me was that the experience of ordinary diners would be nothing like ours. Since everyone knows all restaurants give regular patrons special treatment in one way or another, I think CHers certainly are smart enough to take that into consideration when reading reports from regulars. So, in essence, the moderators were treating Chowhounders as though they (the CHers) were stupid.