Lots of spatter, as on stovetop, but less controlled. All the water has to evaporate first - that’s the spatter.

Covering helps during melting, but after that you actually want the water to escape so it’s somewhat counterproductive.

Thx, will keep this in mind.

Lots of spatter, as on stovetop

I don’t remember it was spattering every where with the pan or pot, but I use a medium low heat, so it took a while to get the blonde stage.

And low heat is always the secret,

Yet another perfectly good name for a band. If anybody needs to name their band, they should just read a few posts here - they’re sure to find something worthwhile.

To avoid exploding butter, I microwave it on 60% power, it melts with minimal splatter.

I also melt chocolate at that level to minimize the chance of scorching (I was gong to say prevent, but I’ve still scorched white chocolate, it’s the worst in that way)

But you got better answers anyway.

One possible reason for low & slow: If you turn the heat too high while the butter still contains water, the butter itself will be stuck at 212° but with a lot of heat under it. As soon as the water finishes evaporating, BAM sudden uncontrollable temperature increase.

I use a Le Creuset saucepan. I’ve never measured it but I think it’s 6" in diameter (not big). The enameling is somewhat scuffed but it’s still on the light side.

Thick iron? That holds a lot of heat in the iron - it won’t stop cooking when you want it to. Definitely suggest switching to an easier to use pot.

I mean of course you CAN use any pot, but if you’ve had problems with burning, it might be better to not put yourself at an unnecessary disadvantage.

It’s not a problem if I pour it off immediately.

Browned butter has a nutty aroma,

And a unique taste!

The recipe for browned butter pecan cookies has 1 cup (192 g) packed dark brown sugar
1/4 cup granulated sugar. Doesn’t that make for a very chewy cookie? I prefer crunchy - if I want to make a crunchier cookie would I reverse those proportions: 1 cup granulated, 1/4 brown.

I haven’t made the recipe. I was using it as a browned butter vs straight softened butter eval. My sister recommended that I follow a recipe first before altering it…so, I have no recommendation on changing the sugar level. But, that version was adapted from this 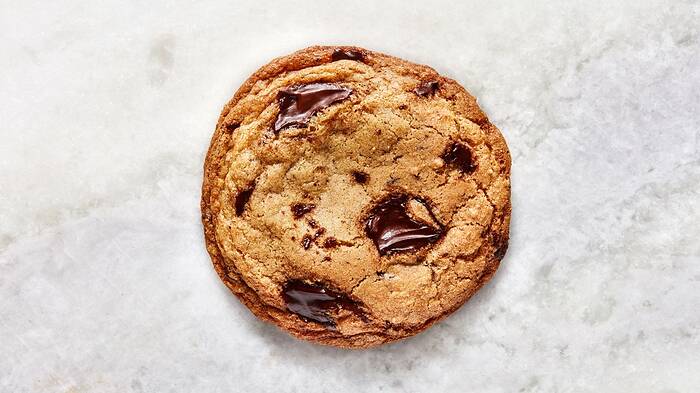 What makes this chocolate chip cookie recipe BA’s Best? The addition of browned butter really puts these cookies over the top. It makes them crispy-edged, chewy-centered, yet still rooted in classic cookie flavor. Oh, and no mixer required, so...

and bakes 16 large cookies. So, the alterations are worth noting.

Someone pointed out a flaw in the recipe: adding cooled but still warm, liquid browned butter to the sugar. No, no, no. Put it in the fridge for a half an hour & let it solidify. It won’t be hard, just solid, and whips up to a dreamy sugar & butter froth. Also the tip about not overmixing is good. I do that & end up with cakey cookies. Not good.

I brown butter in the microwave in a deep glass Pyrex measuring cup (it’s like 8 cups?). I cover with a silicone pot/plate cover. It takes a while, but it works! No mess if I keep an eye on it.

Do you find that microwave method “forgiving” in terms of being able to tell ahead of time that it will be done soon? Or do you have to watch it every moment?
Some microwave doors make it more difficult to see clearly how something is doing. Plus I’m the biggest fan of finding the easy way - but only if the results are just as good as the other method.

I don’t have a sister, but if I did, she’d recommend the same thing.

A recipe may need changing, but you couldn’t know that until you’ve made it the first time as written. (Doesn’t count for simply omitting nuts if you don’t eat those, or something like that, but proportions and kinds of flour, sugar, liquids, and fats should be followed the first time - otherwise why even use that recipe.)

It bugs me when people say they don’t like a certain recipe and then admit they’ve never actually tried making it.