DH isn’t a seafood fan, so I thought it would take some convincing to get him here, but to my surprise he agreed immediately to dinner at Bread and Brine last night! We had a lovely meal at this new Alex Sze spot, adjacent to the newly-situated Juniper (which we are also eager to try). The two restaurants share an entrance, so you have your pick when you walk in - Juniper to the left, Bread and Brine to the right. We had a reservation and I’m glad we did - the foursome ahead of us at the door was told there would be a 45 minute wait.

The space devoted to B&B is small and dominated by a central bar, which was hopping last night. The vibe is extremely hipster - flannel shirts and beards were the waitstaff uniform. We started with two of their signature cocktails, the Necessary Evil (a margarita-like concoction with tequila, pineapple, lime and habanero bitters) and the Cigars on Ice (basically a Manhattan, with rye, vermouth, cherries, lavender ice and charred cinnamon). Both were delicious, although I could have used more spice in the Necessary Evil. The Cigars on Ice was more interesting, IMO, and evolved as it sat due to the ice melting and leaching more lavender into the drink. The cinnamon came as a garnish - a cinnamon stick smoldering on one end. DH let it burn for a few moments and then submerged it in the drink, which added to the evolution of flavor. Very nice.

The menu is divided into raw/cold bar, small plates and large plates. IMO, the small plates were more interesting than the large - the large plates are mostly sandwiches, with the exception of a steak and a fish special (which was salmon last night). We were starving when we arrived so we each ordered a soup and a small plate, then a sandwich to share. The waiter was obviously well-trained on the menu and wine list and guided us to a lovely Spanish white that went very well with all of our food choices.

Anyway, we started with the lobster French onion soup and the clam chowder. Both delicious, but the clam chowder was by far the better of the two. The lobster FO didn’t have any actual lobster in it, which was a bummer, but the shellfish flavor came through in the soup itself, which is obviously based on lobster stock. The sweetness of the caramelized onions combined with the sweet shellfish flavor got a little overbearing after a while, though. The clam chowder was just WONDERFUL, though. Loads of tender clam meat, richly flavored broth (lightly thickened with roux and very little dairy, if any), not too many potatoes and perfectly seasoned. The cornbread croutons floating on top were the perfect textural accent. Apologies for my terrible photography - the lobster FO is in the foreground. 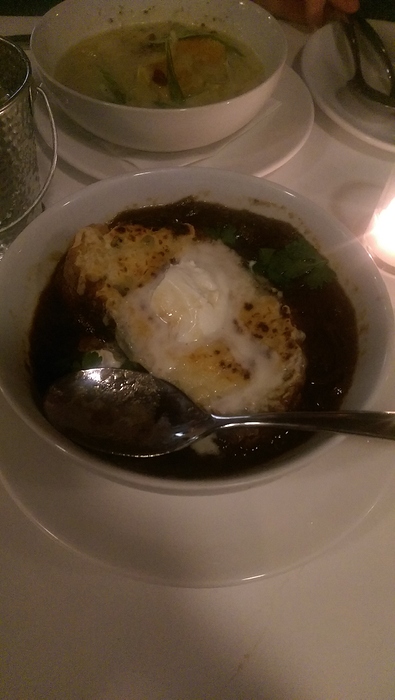 Next we had the squid ink chicken wings and the octopus terrine with crispy pigs head. The wings were awesome - fried crispy and lightly sauced with the squid ink BBQ, which was tangy (lime-based?) and went well with the peanut and cilantro garnish. The octopus was less successful - the fish itself was melt-in-your-mouth tender, but seriously oversalted. The little salad that came with it was basically flavorless (it was listed as zucchini but looked more like shaved fennel; however, it tasted like nothing at all) and there was no chili oil that I could discern. The crispy pig’s head was actually three little fritters, which while delicious, didn’t connect to the pile of octopus and shaved vegetables in any way. It came with a badly-needed lemon wedge but even a hit of acid couldn’t correct the salt problem. 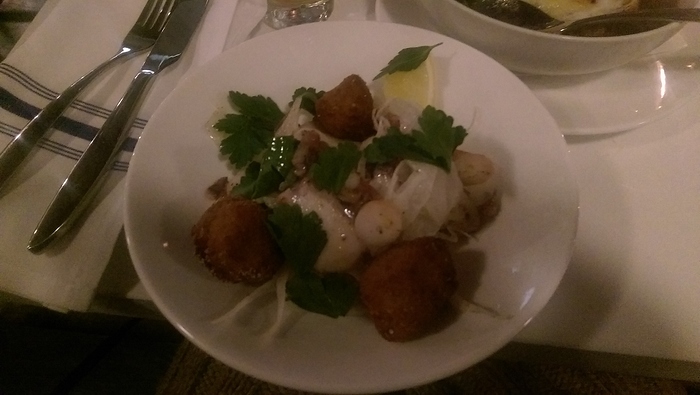 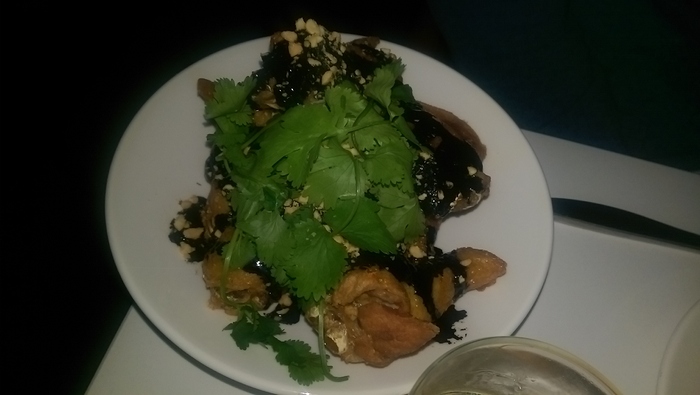 Finally, we had the crispy fish sandwich, which I think was cod. Very well executed. The fish was a nice thick piece, which meant a perfectly crispy exterior and moist interior. Deep fried lemons were a fantastic touch. Crisp half-sour pickles and quality tartar sauce. The butter-fried potatoes are french fries that taste like they were tossed in melted butter after cooking, and they were GOOOOOOOOOOOOOD. Like eating a buttery baked potato in french fry form. Sorry, forgot to take a pic!

This sounds like a lot of food (and it was), but the portion sizes are fairly restrained. DH wanted to try dessert, though, so we ordered the blueberry hand pie and a pumpkin spice affogato. They were out of biscotti for the affogato, and the waiter told us he prefers it with vanilla instead of the pumpkin spice on the menu, but DH loves anything pumpkin so we ordered as is. The gelato and espresso were both good, but the portion was extremely skimpy for $6 - I would say there was no more than a half-scoop of ice cream. Given that they were out of the biscotti, an extra scoop of ice cream would have been nice. The blueberry hand pie was three separate components - a WONDERFUL, tart, silky cup of lemon curd, a small scoop of lovely sour cream ice cream, and the pie itself, which was only average. The filling was bland and a bit gummy, and the crust had that slightly chewy/stretchy texture that pie crust rewarmed in the microwave gets. I could have eaten a vat of that lemon curd, though! 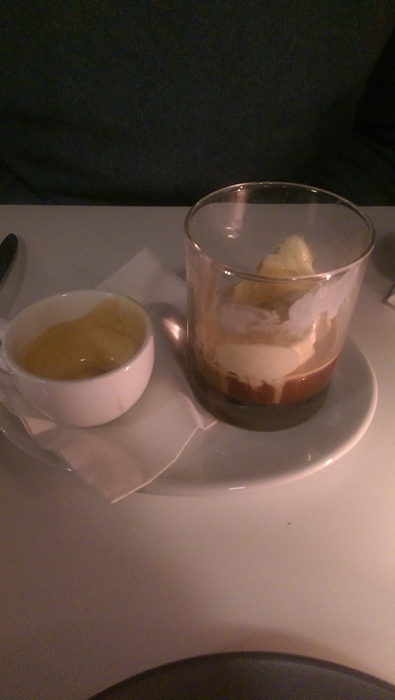 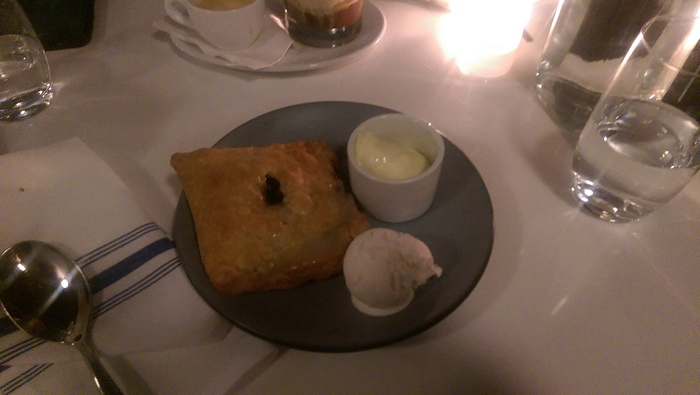 Total bill for food was around $75, plus a $40 bottle of wine (and the two cocktails). On a related note, we stopped into Boro6 Wine Bar in Hastings before dinner for a drink and tried two nice reds for around $9/glass each. The wine list at B&B was similarly affordable, with most offerings around $9-10 a glass, with just a few in the $15 range (plus a few higher-end bottles). I am used to paying $16-20 a glass for wine in Manhattan (and not necessarily better wines than I’m seeing at places in Westchester), so that is a welcome savings.

Service was attentive despite a crowded bar and full tables. The tables are close together and the noise level was a little high, but not terrible. There was one couple with children there just finishing up as we were arriving, but the majority of the crowd was business casual/commuter types, and I wouldn’t characterize this place as kid-friendly at all. Very enjoyable meal and we’ll definitely be back!

Great review, thanks! I think I have to venture out of Northern Westchester!!

I think I have to venture out of Northern Westchester!

Yes, come on down! We have been very pleasantly surprised to discover some good food in the river towns. I hope the scene continues to develop!

My favorite French was there, Buffet de la Gare. Sadly, they closed a couple of years ago go.