The most striking thing about the White Horse is the view from the restaurant over the marshes towards the sea. The sunset was spectacular. And the food wasn’t too shabby, either.

We shared half a dozen Brancaster oysters to start. Served just as they come, on the half shell, with a little bowl of shallot vinegar to drizzle over. You probably can’t get fresher unless you get them out of the sea yourself.

One of us stuck with seafood for a main course. A thick wodge of cod roasted perfectly to the just flaking stage (although no crispy skin). Alongside, a mix of spuds and pancetta, together with peas and asparagus. The other plate featured a free range chicken breast (again, no crispy skin) with hispi cabbage, leeks (which could have stood a tad more cooking n) and a scattering of hazelnuts and chanterelles. A light, slightly sweet, jus set it off.

Desserts were a bit of a let-down. House made summer fruits ice cream was neither particularly fruity nor particularly creamy. And a plate of “compressed strawberries” simply wasn’t. Sure, the scattering of just four or five berries had been macerated so they were soft but not really any improvement on leaving them untouched. There were a couple of blobs of cream that tasted as though they may well have come out of the squirty can. There was a scattering of crisp crumbs of something instantly forgettable.

Service had been generally engaging and efficient. There had been a faff opening a bottle of wine which involved two members of staff – the bloke possibly thinking that this was not a job for a girlie. He managed to get bits of cork into the wine. We asked for another bottle which the said young woman naturally managed to open on her own entirely successfully – and with a smile, which characterised the rest of her attention to us. She was a definite asset to the business.

Have stayed at, and enjoyed dinner at, the White Horse twice. Love that view and always found the food and service quite lovely too. You make me want to go back!

If you get back to that part of the world and only have one meal - make it the Duck at Stanhoe. Maybe five miles inland from Brancaster = No views but everything you want from a village place doing Modern British food. Outstandingly good for the money. 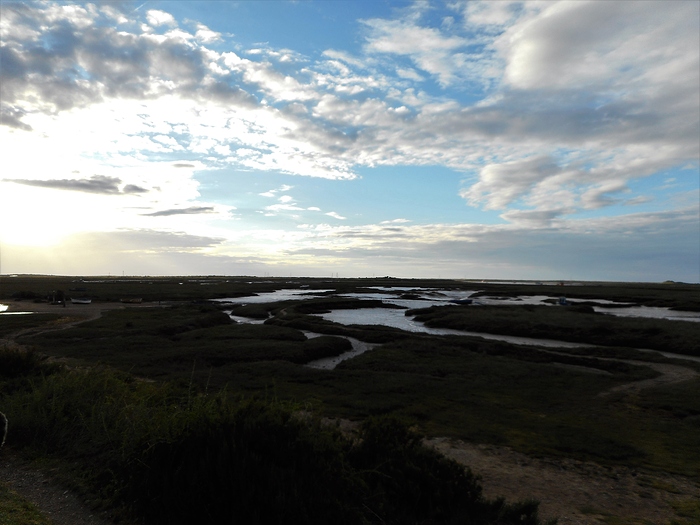 As ravishing as I remember it. Time to get back there.

Is the restaurant on some sort of American radar? Reason for asking is that there were a couple of American woman eating there when we were. Just seemed slightly unusual to find foreigners (of any origin) at such a relatively out of the way spot

I’m not sure. I first stayed there with my parents in 2007 – they shared those local oysters which had just been dug yards away that afternoon and loved them – and then returned a few years ago. There were no other Americans either time I was there but my mother was great at finding off the beaten path places, that was always the preferred place to be for all of us. And the White Horse has a special spot in my heart because my parents were both fairly frail by that time and the staff were just wonderful with them.

A bit of Googling reminds me just how many air force bases there were in Norfolk during WW1 & WW2, including quite a few used by the Americans in WW2. I suppose there may be some touristing along the lines of “Let’s visit where Dad, or Grandad, was” - apart form it being a rather lovely part of the world.

And I make a tenuous food link to keep on topic. North Pickenham was used by the RAF and USAAF between 1944 and 1963. The runways now house sheds used by our major intensive producer of turkeys - Bernard Matthews Ltd.

Is the restaurant on some sort of American radar?

My parents retired to Norfolk so familiar with the US military presence. A few large USAF bases are still in that part of the world - Lakenheath and Mildenhall (which is closing) plus the smaller Feltwell which has USAF family housing and schools for the operational bases.

That probably explains it , Phil. I hadnt appreciated the Yanks were still “over here” (and, possibly, still “overpaid and oversexed”)