When you’ve visited a restaurant several times, it’s hard to find new things to say in a review. So, I may have said this before but it’s worth saying again – B2M fully understands the meaning of the word “hospitality”. There’s a welcome, a warmth and a generosity in everything. We hadn’t planned to be visiting the restaurant but I had an email from Sandeep saying he was putting on five new main courses, for National Curry Week. Five dishes, each from a different part of India. Well, that had to be worth a change of plan.

We got drinks and mini poppadums, with chutneys, to nibble on while we checked out the Curry Week menu. Ordered our starters and mains, with Sandeep saying something about him doing something special. Starters arrived. Bhel puri is a regular order for us here and it was as good as ever. And paneer tikka was exactly as expected – cubes of cheese dusted in spices, and cooked in the tandoor, along with some pepper and onion for a contrast in texture.

Then it was on to main courses and Sandeep’s “something special”. It wasn’t just the main courses we’d ordered but a small portion of all five, served up on a metal thali tray. Not many places do thalis and B2M doesn’t in the normal course of things so we knew it was going to be a real treat, even before we’d put a fork to our mouths. We love the fact that, with a thali platter, you can “mix and match” the various dishes.

As for the dishes, there was Chicken Sukka (from Maharashtra, where Mumbai is its largest city). It comes in a very clingy sauce that’s well rounded with nothing overpowering. Working my way clockwise round the platter, there was then Laal Maas (from Rajasthan). I’ve eaten this before and it’s a rich dish, packed with flavoursome chilli. Sandeep told us the chef uses the traditional Mathania chilli to make this and it gives colour as well as spice. The lamb was perfectly tender. Think of this as a very sophisticated version of the curry house rogan josh (but I do no justice to it by that description – it really was delicious).

Then there’s a creamy, almost sweet, Punjabi dish – Methi Matar Malai – featuring peas. The sauce is based on a cashew nut paste and flavoured with fenugreek, both adding to the background sweetness. We wouldn’t usually order such a mildly spiced dish but it really works. Next up, a fish caldinho from Goa. B2M’s chef is Goan and he cooks this dish just as he might at home. It’s fresh seabass cooked in coconut milk with mild spicing, so the delicate flavour of the fish isn’t masked.

And finally, another vegetarian dish. This one is Undhiyu, from Gujarat, and is comprised of mixed vegetables (aubergine, potato, peas and yam) in another clingy, very well flavoured sauce. As for carbs, rice and bread were as good as ever.

I have to say that this was all an outstanding bit of cooking by the chef – to be able to put on five new dishes and have them absolutely bang-on for flavour is something of an achievement. 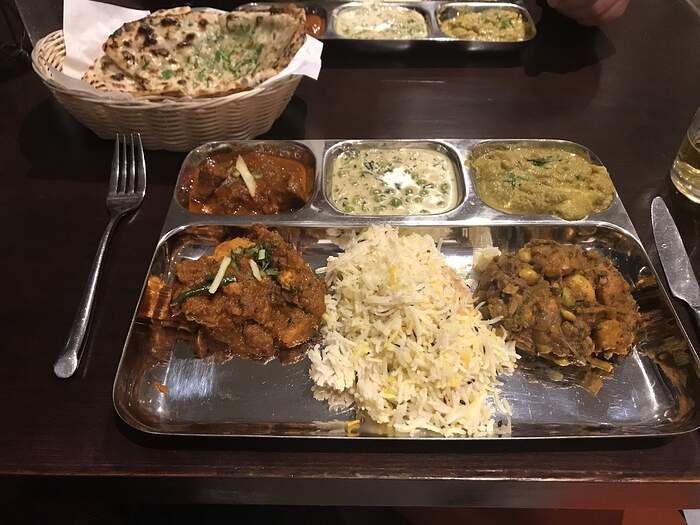