wilson Farms CSA started this week. I’m always curious what exactly everyone gets from all the different CSA’s so decided I’d start off a theme and post what we get week by week. Please feel free to post threads if you subscribe to any as well. (Very curious about the Cape Ann fish share).

The main reason we signed up this year is that they are delivering to my SO’s office in Waltham each week, super convenient!!! I think they needed something like 20 people to sign up. I hope it makes sense for them and they continue! 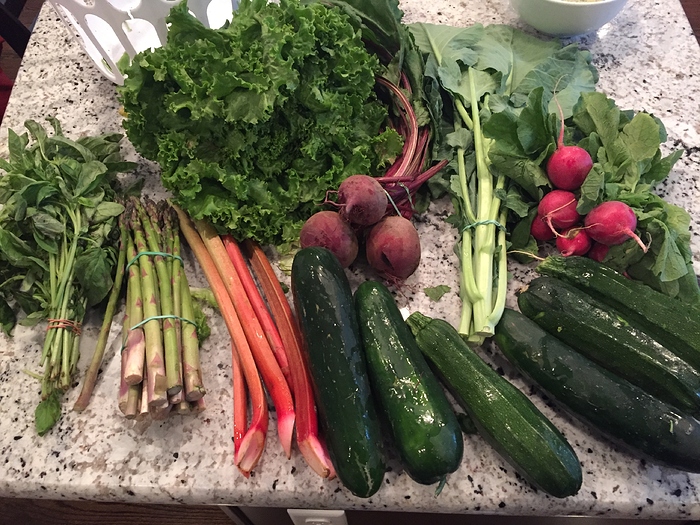 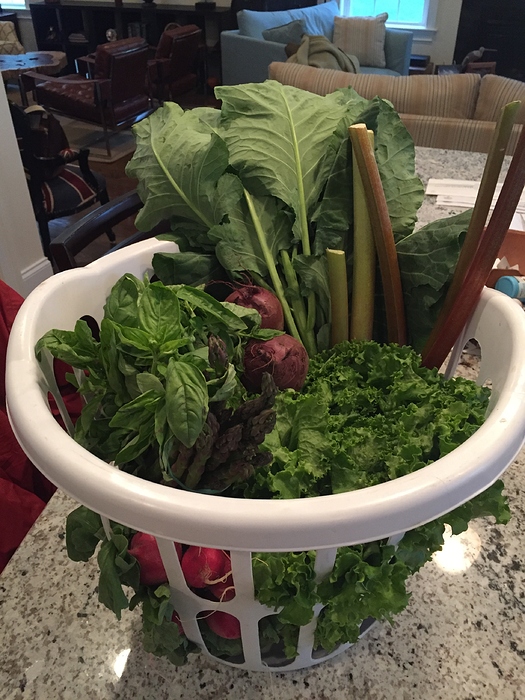 It’s great when companies offer this perk to employees. When I was working in biotech in Central Sq, my company offered a Silverbrook Farm CSA in 2010 and the response was fantastic. I had to haul it home to Teele Sq on my bike, which wasn’t fun, but we were definitely happy with the results. We stopped doing CSA because the bounty was too much for the two of us and we couldn’t find anyone close by to share it. Now that we’re 5 minutes down the street from Lex Farm, I just shop a la carte from the farm shop, which I and spring onion love. The Arlington and Lexington farmers markets are a short bike ride away, as well. But I love hearing and seeing what folks get from their CSA. I think CSA does more to sustain the farmers more than shoppers like me, so I am full of love for CSA-supporters.

We haven’t done a CSA in a few years because it was always a ton of greens (chards, kale, etc) and huge volumes, so never used all of it either. I’m hoping the 1/2 share is more manageable and I’ve watched what Wilson Farms offered now and again, and it seemed like a bigger variety. So we will see.

The asparagus was already eaten and was delicious.

Just posted my week 1 experience with Cape Ann on that thread.

We’re tempted every year by the idea of a farm csa, but we like visiting market stands too much to have succumbed to temptation. The Central square market on Mondays, Harvard on Tuesdays, and Davis on Wednesdays are all within easy striking distance for us at or after lunch, so it does not look like a csa is in our future.

The Central square market on Mondays, Harvard on Tuesdays, and Davis on Wednesdays

plus Union Square on Saturdays and I have all the produce that I need. One year I actually tracked what I spent at Farmers’ Markets and Farms, and a CSA was significantly more expensive. Two people can only eat so much.

Well … for those that are curious here is week 2. Again a 1/2 share and just FYI I still have the radish and beets from last week (I was out of town for the weekend or I think it all would have been gone). 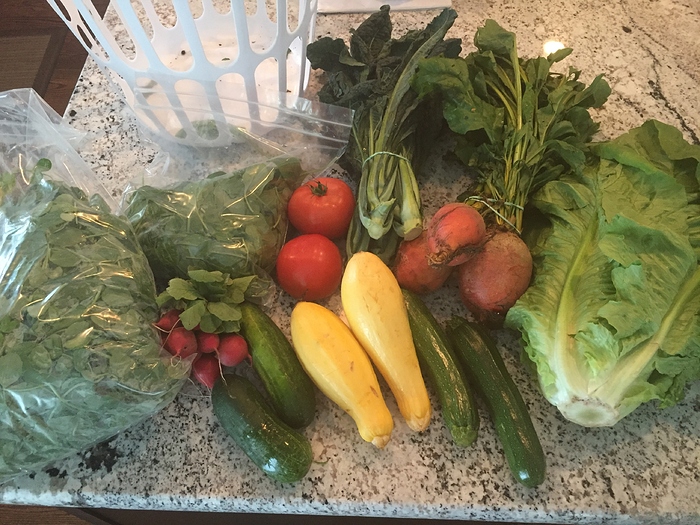 I’ll piggyback here to keep all the CSA and farmers’ market data in one place…Hit up Lexington FM yesterday and got some fragrant garlic scapes and gorgeous spicy salad greens from Wright-Locke in Winchester, one of my favorites in the area. They always have a well-edited and impeccable selection of produce throughout the season. Also got some delicious oatmeal and cranberry cookies from Goodies for spring onion (B loved them, too), halibut from Boston Sword&Tuna (anyone know anything about these guys?), bread from Swiss Bakers (I usually buy from Bread Obsession but wanted to branch out…the multigrain Palazzo was a fine accompaniment to our big veggie soup last night, though not as dense as we like our bread). The 2 dudes providing entertainment were funny and sarcastic ("hey, who’s selling kale?). Spring onion starting acting up, probably was too hot for him yesterday, so I had to leave before I could get their names.

At the Lex Farm farm stand yesterday, got a giant bunch of green garlic, a sourdough loaf from Bread Obsession, and a beautiful bunch of radishes. They are carrying milk and ice cream from Crescent Ridge again, both of which spring onion loves.

The halibut purchased on Tuesday and the green garlic was grilled and tucked into Korean-style ssam with multigrain rice, dabbed with gochijang. And it was delicious. One of our go-to summer meals.

Doing well using everything except the radishes, they just keep piling up. 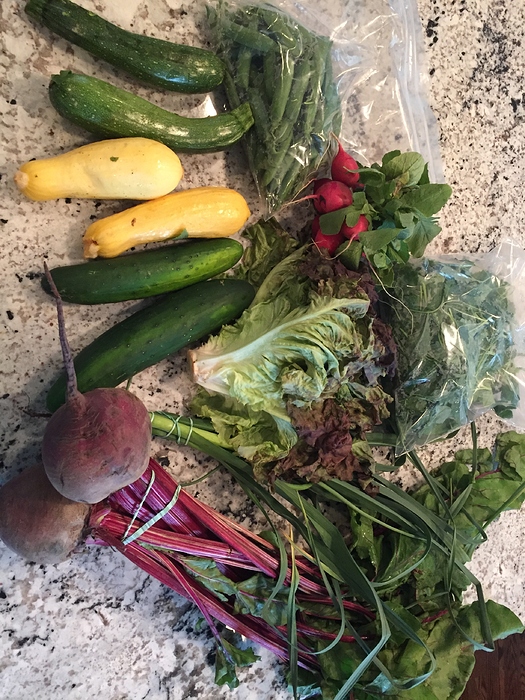 Nice. Have you tried butter-poaching the radishes? Just a thought. It really changes them, but they’re not for everyone. Four out of five of us in our family like them quite a bit.

Thanks for the suggestion! They really are the only thing so far that I’m just not sure if I’ll ever get through. I’ll give it a try.

radishes are also good grated into a slaw of some kind with other raw vegetables. We love the Central American curtido slaw.

A simple radish recipe that I quite enjoy is Fuchsia Dunlop’s radishes in chile oil, pretty similar in idea to smacked cucumbers: http://leitesculinaria.com/84459/recipes-radishes-chile-oil-sauce.html

Thanks for the radish suggestions. I went with the butter poach and they were very good - and we went through more than we would have raw.

I still have the baby kale from last week and the spinach. It’s a lot to keep up with but not crazy. You do have to be very conscious about using it all - but I guess that was part of the reason I signed up - careful what you wish for

I do notice that the variety within each week and between weeks is much better than I’ve had in other CSAs. So that is a big plus. 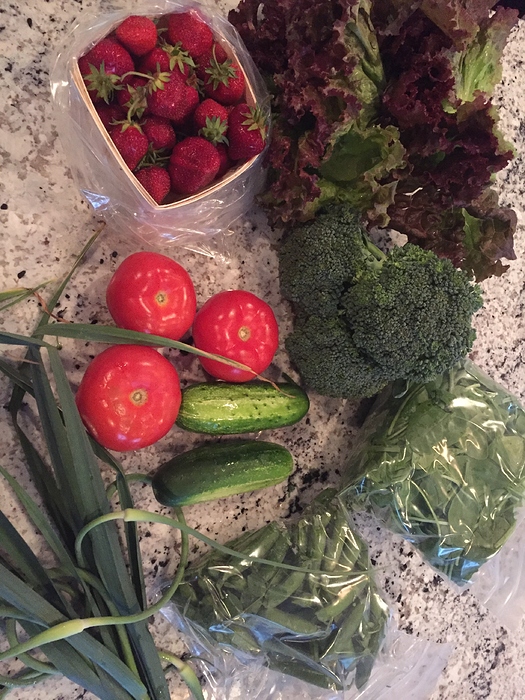 I’m impressed that you’re getting tomatoes already. That was always a big complaint of mine with various CSAs we’ve done- not enough tomatoes! I’m picking up our neighbor’s Wilson CSA next week- now I’m really looking forward to it- thanks!

how were the tomatoes? I got some from Maine at Whole Foods and they were not one bit better than the usual grocery store tomatoes this time of year.

I believe they are still hothouse tomatoes from Maine. It is a little early for real tomatoes.

They flavor was better than grocery store tomatoes but the texture was still the same - a little mealy (if that’s the right word).

yeah, that’s what I thought. If we get any good local tomatoes before August, we’ll be very lucky.

I was out of town this week, so had someone else take my share.

peaches? already? Be still my heart!