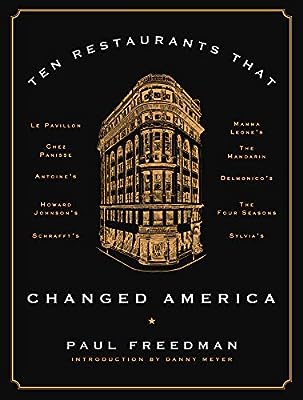 The author, Paul Freedman, is a “professor” at Yale who lives in Pelham, New York.

The book suffers completely from the usual left and right coast, blue state, bias. Within the chapters, it also bounces around from topic to topic in a stream of conscious fashion with no apparent organization. Freedman weaves back and forth into all kinds of unrelated crap like the Civil Rights movement when he talks about Sylvia’s for example, instead of discussing how Sylvia’s itself changed the way we live and eat. He also completely and totally ignores why these restaurants were important for anyone who did not live in NYC or San Francisco.

The focus only varies slightly from the French and fussified, which has always been Manhattan’s problem. Howard Johnson’s is used to discuss fast food, Sylvia’s is the proxy for Southern, Mama Leone’s for Italian, and the Mandarin for Chinese. But there is no indication how these restaurants really changed America, or even more properly reflected America of their time. And if you look at the list, they all reflected America so well that most of them are now out of business, permanently. Maybe that’s what Freedman meant by “history”.

There is no discussion of the historical importance of taverns. Take Walter Staib’s work at City Tavern in Philadelphia, for example. If there is an original American cuisine, apart from pemmican, maize and game, or Southern cooking, then it would have to be tavern cooking. This is completely ignored.

Finally, there is apparently nothing worth discussing that came from South of the Rio Grande even though salsa now outsells ketchup, and has so for a number of years. Can anyone imagine American food today without nachos, tacos or even Caesar salad? Of course it goes without saying that good Mexican food is hard to find in NYC, which may explain the bias.

In short, a ponderous, absurd, poorly written and totally arbitrary turd of a book masquerading as a definitive history.

Thanks for your ordeal. So far, Fortune Cookie Chronicles has been most engaging restaurant research and writing; and Calvin Trillin managed to get us to Jess & Jim’s, Arthur Bryant’s, and Laughner’s.

Thank you! Just from reading reviews I was dubious of the book’s premise.

I haven’t read the book. I don’t know if Chez Panisse changed America. But it certainly changed Northern California enough that compelled David Chang to make the ‘fig on a plate’ comment.

The book also completely, and I mean completely, ignored BBQ. Unfathomable. How can you even begin to discuss American cuisine from the inception, or even over the last 50 years, without discussing BBQ?

George Washington, to name just one of many presidents, is especially known for his love of bbq’s:

"In one diary entry, dated May 27 1769, George Washington describes when he “went up to Alexandria to a barbicue.” What I find most fascinating about his subsequent entries over the next few years, is that it reveals George to be the very antithesis of what we have come to believe with regard to his personality and demeanor. To most of us, the ‘Father of Our Country’ is portrayed a stoic and a serious individual, yet most of his entries concerning barbecue (there are many), are usually lighthearted and down to earth. "

Again, of course, not a whole lot of good BBQ on Manhattan.

Of all the places listed in the book, I would say Panisse over the last 50 years is the most deserving. It, however, is the last listed and kind of gets short shrift.

The book might be far more interesting if it was written by Alice Waters.

Would it be accurate to say that the book focuses more on restaurants that introduced foreign, or extant American sub cuisines, to the US/NY/SF, than ones that innovated themselves?

The book also completely, and I mean completely, ignored BBQ. Unfathomable. How can you even begin to discuss American cuisine from the inception, or even over the last 50 years, without discussing BBQ?

It seems pretty clear that the book is shockingly narrow minded. If the title were “X restaurants that redefined dining as talked about among well-to-do coastal elites,” then it might be on target. Even the “commoner” inclusions, like Howard Johnson’s, give a nod to that class of restaurant where what we now call fly-over country was “drive-through” country. (Howard Johnson’s is a highway/freeway kind of thing.)

Any such list is bound to be partial in some way. But I wonder if the idea of McDonalds arose here. Also, it would be interesting to open up into genres, as you suggest with taverns. Think also: Greek diners, drive-ins, bbq shacks in their many forms, and coffee shops that encourage people to sit there alone for hours with their laptops (don’t try that in most parts of the world).

Why is ‘professor’ in scare quotes? He holds the Chester D. Tripp Chair in History. That doesn’t change just because you didn’t care for his book.

Why is ‘professor’ in scare quotes? He holds the Chester D. Tripp Chair in History. That doesn’t change just because you didn’t care for his book.

Quotation marks can occasionally be used for emphasis, but only when quoting a single word which someone else used. Usually, this implies that the author doesn’t agree with the use of the term."

Because he is a professor of medieval Spanish history, specifically Catalonia. His entire serious academic research output focusses solely on this topic.

I see nothing in his background that qualifies him as an expert on American restaurants, except that perhaps he has eaten in a few of them.

The book is also clearly written for a popular audience, and does not purport to be a serious academic study.

Therefore, in this context, I DISAGREE with the use of “professor” since he is clearly not writing in that capacity, has no special knowledge of the topic, and performed no original research in producing this book.

I thus believe the use of the quotes to be grammatically correct.

Cheers for the explanation. As noted, however, your distaste for the use of ‘professor’ in biographical material (he does medieval foodways, too) does not change the fact he is a professor.

I’m not sure why you linked to a discussion of quotation marks for emphasis, seeing as that is often regarded as incorrect, and more importantly unnecessary when one can italicise (as one can here). Moreover, the use of scare quotes, as I described them earlier, seems more apt for grammatical explanation. (http://www.dailywritingtips.com/3-erroneous-uses-of-scare-quotes/).

That said, you did express the rationale for your disdain, so I received my answer.

And although grateful for the time you took to write a review, I can’t say that the review puts me off this book. An academic is allowed to write for popular audiences (few would buy expensive and poorly marketed books from university presses) and allowed to exercise skills (although I also have my limits here, as just about everyone feels free to weigh in on my discipline). It sounds as if you disagree with the author’s approach to world changing; he seems to be – from what you’ve written, at least-- interested in the social life of restaurants and not their impact on food. You may find a discussion of a restaurant’s role in Civil Rights unnecessary but others may find it pertinent.

But that’s what reviews are for, even negative ones: to teach us more about the critic and let us know about the book regardless.

Having worked with academics for a significant part of my career I can tell you that I could give a rat$a$$ for the title. Whether perfessors, assistant perfessors, associate perfessors, or even lecturers or graduate assistants they is all basically boils on the bum of society and are PITAs to work with.

It sounds as if you disagree with the author’s approach to world changing; he seems to be – from what you’ve written, at least-- interested in the social life of restaurants and not their impact on food.

His, or his publishing company’s, use of professor in this context is disingenuous.

That’s what I disagree with.

Since you seem to be from the UK and either new labor or a social Democrat I will put this in terms that you can understand.

Just because someone is from Brussels and has the title of EU Minister of Fisheries it does not mean that she knows how to catch turbot in Brixham, much less how to fry them.

Cheers for the explanation.

An academic is allowed to write for popular audiences

Yes, but generally speaking the academic looses all credibility in their profession by doing so (vis. Carl Sagan).

I’m sure the history department at Yale all secretly hate this prima donna behind his back.

the use of scare quotes, as I described them earlier, seems more apt

Since you seem so preoccupied with “Scarekhwotes” here is one for you: 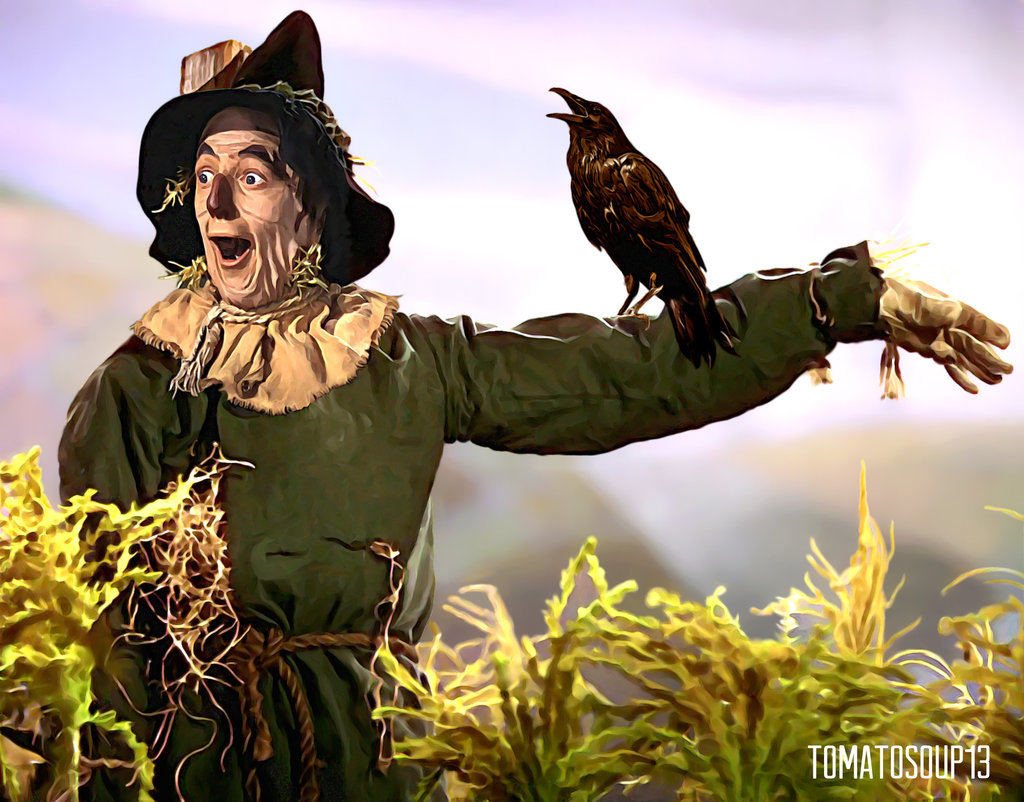 Lions, tigers and bears, oh my!

Why so angry? It is just a blog. No one wins.

Why so angry? It is just a blog. No one wins.

Certainly not if you read the book.

In the interests of full disclosure is is also really refreshing to publish a review and then have someone pick grammatical nits about the use of quotation marks. This is especially so when their real intention is to disagree with your review, EVEN THOUGH they haven’t read the book.

It is available for 22 Quid, shipping included, on Amazon UK:

Of course I went to my local library to check it out, and am glad that I did not pay full price for this.

I did think other people might be interested in the book, which is why I made the review in the first place.

And of course everyone is entitled to their opinion, but they should read the book first.