I saw this news, very exciting I think? I watched the little video and it doesn’t look “twice fried” or sauced, but maybe that’s just a portion of the preparation.

My goodness, what is going on with this chain? A different perspective:

The video doesn’t show much; the website emphasizes twice-fried. When Toreore first opened didn’t they just talk about a secret prep method? Wasn’t until later it came out it was twice fried.

I don’t know what happened to the Dallas store. Maybe just franchisee inexperience? Looks like from the website the growth has been spotty.

The Press reports 5 stores are planned for Houston if the Katy store does well. There is also a separate franchisee opening a store in Pearland.

I was in Katy today and stopped for lunch at Hoodadak. Only one other person came in while I was there and I hope that’s because of the President’s Day school holiday today.

I expected counter order fast food, but a waitress seated me and took my order. She gave me a lunch menu and a regular menu, and there is a bar (beer and wine) above which is a a chalk board menu: 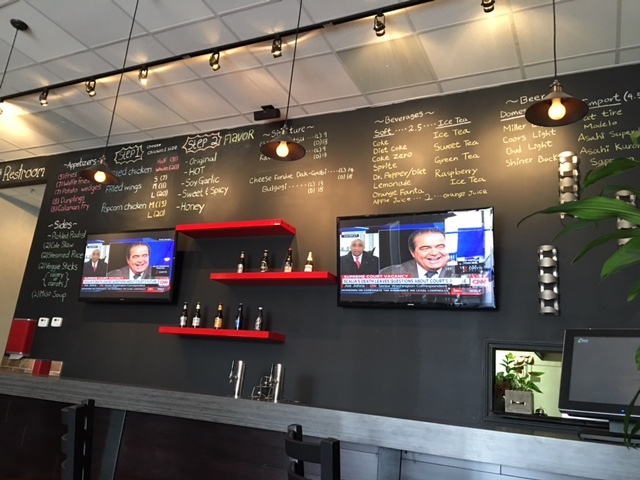 I ordered the chicken wing lunch special which was 4 wing segments with fries and slaw. The slaw was topped with a spicy mayo dip that was also on the side for the fries. I though 4 pieces was a small amount (the regular menu offers 7 for the “small” option), but she said it was plenty and it was. You choose sauce from about 5 and I chose soy garlic because it seemed to be a popular one on yelp and less messy than the sweet and hot option. 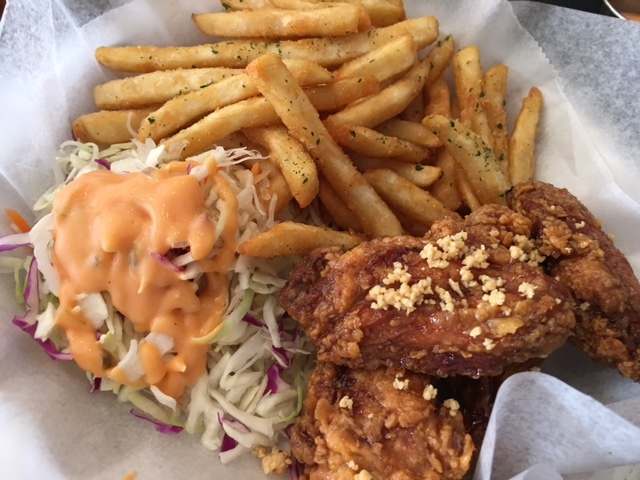 Strangely, about 5 minutes after taking my order, the server returned to ask if I have any food allergies. Why I don’t know, but since I don’t, they went away satisfied.

I don’t know if two Korean Chicken places in Katy is one too many, we’ll see when Bonchon opens. I haven’t been to Dak & Bop in the museum district, but it gets raves it seems. In fact the only Korean chicken I’ve had was at State of Grace and it was really amazing. Not sure what the authentic meal is like though!

This was good and I’d go back if in the area again. While I waited for the food, they brought gratis pickled radishes. They tasted Like I would think kimchi would, and I’ve never wanted to try kimchi! but I ended up eating about 1/2 of them. 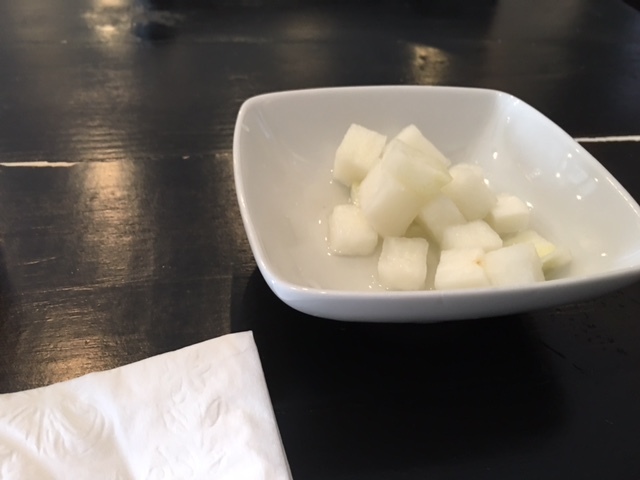 I seem to have landed here on HO just as you hit ‘post.’ What a great report. That chicken (the whole meal, really) looks great. I may have to make a special trip out there.

I actually haven’t stopped at that booth since they changed the name from Toreore Chicken and Joy to just Toreore. I don’t know if they’ve changed the menu or what the reason was for the name change.

This menu also includes whole or half chickens, and boneless pieces of chicken called pa-dak, bulgogi burger, curry rice and a number of other offerings, even a cheese fondue item. Here’s a FB page:

Damn. It’s a long way out to Katy from here but it’s looking more and more inevitable.

I ordered the chicken wing lunch special which was 4 wing segments with fries and slaw.

That looks great. Anyone heard from Jaymes lately?

Anyone heard from Jaymes lately?

Nope! I miss her comments! I wonder if she’s hit up Hoodadak yet. Also, I tripped out to the Trader Joe’s in Katy a while ago and noticed a brick & mortar Bernie’s Burger Bus across the way from it. I wonder if it’s as good as they say! She should start another I Love Living In Katy thread here.

Perhaps she’s on the road. She seems to travel a lot. Another Katy thread would be good. The area seems to just be exploding, new eatery-wise.

I got an email from her. She’s just been busy. I’m sure she’ll check in soon.

(I mentioned this thread to her.)

Since we’re all here, I’ll share this link here, about what happened at CH.

What happened to Chowhound?

Chowhound's redesigned website for food lovers is being met with a growing chorus of "May I be excused?"

I think she’s hanging at egullet. I have not joined that group.

Ii believe that article was posted months ago on one of the threads on Site Talk here on HO.

I had to be half way to Katy today for a funeral so I made the trip on out to try Hoodadak. I had exactly the same order as you (but I didn’t get the complimentary pickled radish!). There’s a line of bottles of wine and sake on the bar at the right now; they’ve got their license and will be selling bottle and tap beers, wine, sake and soju.

All three of the cubicle-like booths were occupied and there were three people doing take-out (about eight orders in all) while I was there, so they’re doing some business. Very friendly people. The waiter wished me well in Korean as I left.

Good and crispy chicken, very good fries. I’d want to try at least one other flavor before deciding. It’s been so long since I’ve been to Toreore I can’t reliably compare them but this was good, if just a darn long way away.

The four wing lunch special combo wasn’t enough for me though.

I agree, I would have liked more chicken and less other stuff, but those fries were super. My tea was included in the 8.95 price so that was fair considering tea costs $2 everywhere now days. I definitely left full.

Are there any seasoning on the breading or the chicken besides salt?