Finally, I found where everyone who left CH went! Thank you CulrzNJ for your recent post on CH directing me to Hungry Onion. Has anyone been to the Blu Grotto at the Monmouth Park racetrack in Oceanport? I have a reservation for Saturday night and I can’t even find a menu online…

Welcome NYCPA!!! Good to see you!! Please invite any others from Chow over if you have ways to contact them. Sadly I have not been to Blu Grotto yet, I haven’t been to Monmouth at all yet this season, I"m going Sun to the Haskell, but a trip to Blu isn’t on the agenda. Looking forward to hearing hopefully good things about it.

If you get the tomahawk chop, post about it.

Looks like I’m the first to make it here, or at least report on it! (Shame on you of you have been here and haven’t shared with the rest of us!)
Arrived at 7:30 pm fri night no reservations the parking lot was busy so I dropped the wife and daughter off close to the door, parked and met them inside.

The building is new they just opened 5-6mos ago and it’s a very nice space, both tables and booths with a semi circular dining room with ceiling to floor windows overlooking Monmouth Race track. (Clubhouse /final turn, although the track is no illuminated at night so I couldn’t truly see or judge how good the view was) Reminiscent of the old Tavern on The Green, although much more modern or updated.

The bar is a separate area with 2 betting machines for the track located in the bar area with several large TV’s for simulcasting, do NOT let this turn you off, the machines are discrete and this is not the type of place losing tickets will strewn the floor.
They also had live entertainment outside the bar area a solo artist playing guitar and singing a VERY good vibe about the place. Also not sure how exactly to describe it but the entry area had video images projected on the ceiling, the most similar I can describe it if anyone has been to the strip in Old Vegas with the canopy, it’s similar to that. This is only in the entry/lounge area.

Anyway the hostess said they only had immediate seating “downstairs” would that be “ok”, we said yes and followed her. What happened next is straight out of the movie Goodfella’s when Henry (Ray Lioatta) takes Karen on their first date, the hostess takes us INTO the kitchen, past the line, past the salad station, past the deep frying down a back stairwell (at this point I mentally paused and had to think about when my birthday and anniversary was because I thought for sure this was some convoluted surprise party for me) thru the downstairs prep area, walk ins and pantry to a private wine room with about 8 tables in it. Think the wine room of Bueno Sera with an exciting adventure on the way there. Apparently this will be for private dining/parties and has its own entrance from the outside but with the rain and leaves they prefer taking people thru the kitchen. The room is not 100% complete according to the staff but it was fine for our night.

On to the food and service, we were greeted immediately drink order taken and small bread pieces and dipping oil. Also an amuse was provided from the Chef, it was a crab salad served on a toast point which was tasty however prepped and kept chilled causing the toast to be very soggy when served.

Order was given, myself oysters and shrimp cocktail-boratta appetizer for the girls, wife ordered the “siciliano tuna” - daughter - clams and linguine white sauce and I ordered the tomahawk rib eye!!!

Apps came and were delicious, only complaint there were only 3 shrimp on the shrimp cocktail and you can only order a minimum of 6 oysters (@ $4 a pop). I would have preferred 4 shrimp and 4 oysters! Oh first world problems!!!

Entrees arrived and looked great. Now tuna siciliano is tuna shredded and served with pasta in a putinesca sauce. I tasted my wife’s and was horrified by the flavor, I didn’t read the description of what she ordered however once she explained it to me that’s exactly what it was. Not a dish I would ever order but she enjoyed it. My daughters was excellent with small clams and plenty of them in what I believed was homemade linguine. My tomahawk was a perfect medium and DELICIOUS!! Served with choices of sauce (no bernaise) I got creamy horseradish and the Cabernet reduction both complimented the steak wonderfully. Also came with rosemary mushrooms and hot peppers that added nice flavor and spice, along with a bucket of homemade Parmesan fries. Looked and tasted great!!

Some homemade apple tart for desert the ladies loved and all in all a great meal!!! I look forward to coming back, been a long time since I’ve enjoyed the atmosphere and food at a new restaurant like this. I’m going to spend a few afternoons on the deck next summer for the races too!! I truly thought this was going to be a half assed attempt to draw people to the park, but it’s not, it’s truly a very good restaurant. Give it a try!

(Fyi tomahawk was $75. Vs $80. For regular ribeye at Fromagerie- about equal size actual portions of meat, but you get a side, sauces and twice the order of fries in a much less pretentious yet still desirable setting) 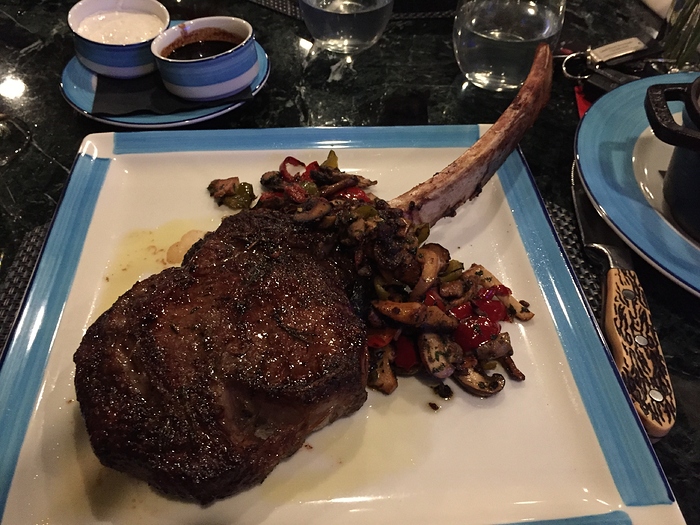 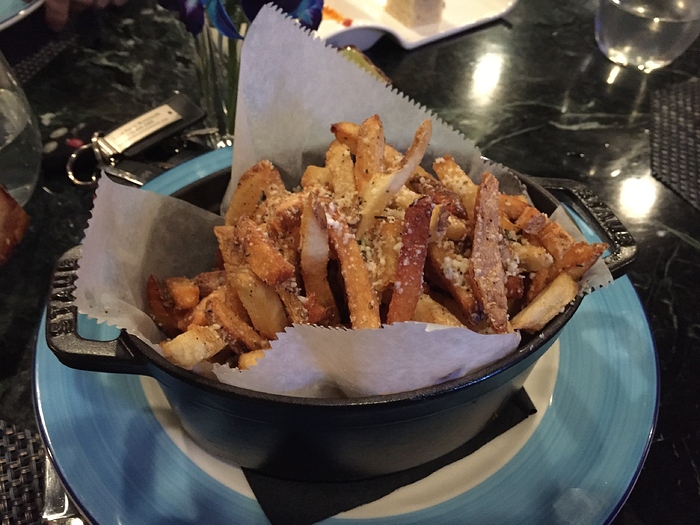 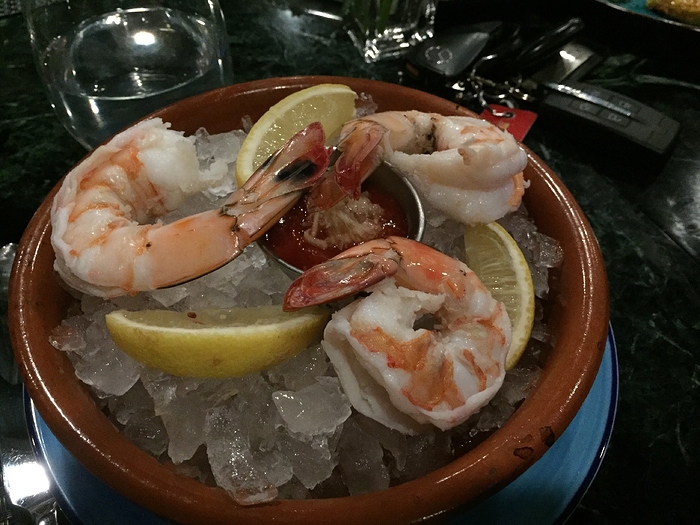 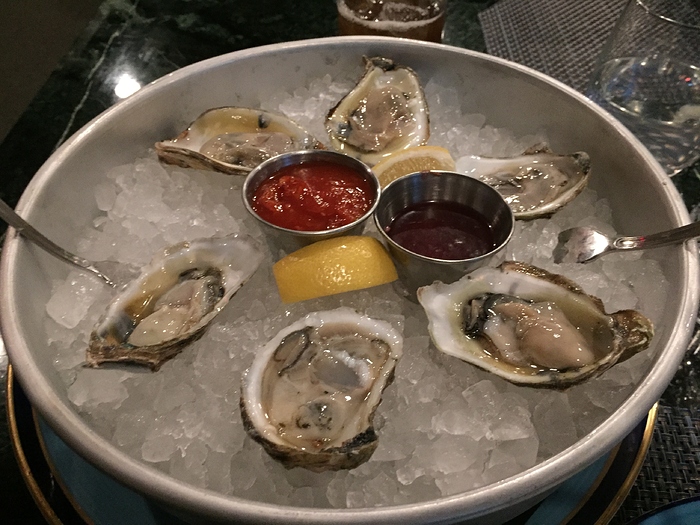 We’ve only been marched through a restaurant kitchen once, at Emeril’s Delmonico in NOLA. That was a wonderful experience for us.

Ah nycpa…good to see you. Finally you figured out where we went lol

Jr those fries look top notch (obviously the tomahawk does too.)

How are they seasoned? Just parm?

I’m trying to stay away from carbs so I only had a few, salt pepper and Parmesan I thought I smelled truffle but didn’t taste it from my limited sample. (Literally 3 fries?) 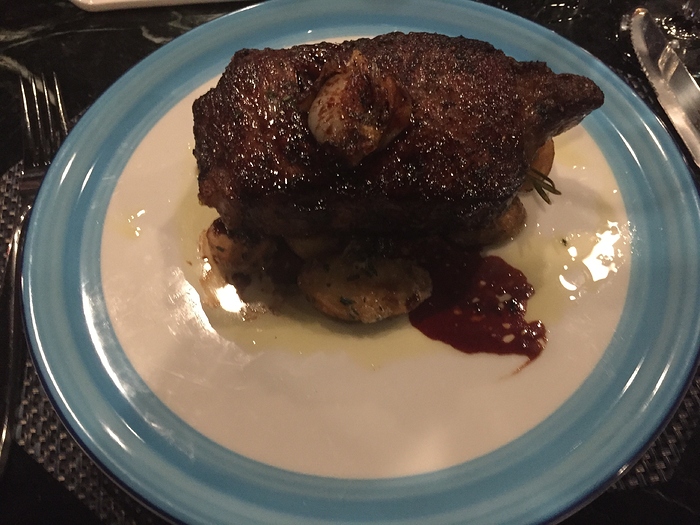 Summary of apps;
Beet Salad; Cesar Salad, Meat Cheese Platter for 2 (only prosciutto and 2 cheese not very elaborate) Shrimp Cocktail (got 4 not 3 this time) Oysters. All very good and enjoyed.

Entrees;
2 aged strip steaks, squid ink fettuccine with clams mussels calamari, pasta primavera and another pasta in a red sauce. Once again all were very good and enjoyed by all.

Service was very good, once again the place delivered a very nice night. One caveat a table of 8 celebrating a birthday shared the room with us. Thankfully it was towards the end of our meal because the rooms acoustics are not for loud parties. Nothing against the people, just not a good space to share with a group like that, only “complaint”.

Nice…what was the better value? (Ribeye vs strip?)

Do you have to go into the racetrack to eat there?

Jr,
Have a celebration coming up, do you recommend Blu Grotto or Christine’s in Ah. At least one steak will be ordered.

No separate building all together on the club house turn.

Depends I would only say here because it’s a far superior space for a larger group, food overall I pick Christine’s. Here they also have liquor license.

the most similar I can describe it if anyone has been to the strip in Old Vegas with the canopy, it’s similar to that. This is only in the entry/lounge area.

Speaking of Vegas, did they have also have extremely large lobsters in a tank, like methuselah-sized?

bringing this back- heading there this w/e barring any illnesses that are floating around…any inner dishes to look out for, steak and linguine w clams look to be too you mentioned JR that I am anxious to try…? Or any hot tips on a pony?

They serve a seafood dish in a “pot”. Ask the server about it, its very popular and a couple we dined with got it and loved it.

Meatballs app is very good too! Enjoy let me know your thoughts.

unfortunately the event had a set buffet menu, so no steak. Did get to try meatballs sliders, which were awesome. Would go back just for that. Location was nice and other than a slightly understaffed bar the service was good. They did a great job with the place- really nice mood and ambiance…overall thought it was a really good place and we’re already planning on heading back on our own to try more items, but def a winner in my book…only a few min away and it’s nice to get out of the usual towns we eat in once in a while…hopefully I hit a superfecta and can grab a cpl tomahawks to go…

Went back last Thurs for my birthday and had another great meal! Quickly becoming one of my favorite local places. (not budget friendly favorites)