We had to spend the night in RI this past Saturday, handing over our vacation home to long-term renters moving from the Baltimore area. We made the most of a sad situation. Which, of course, meant lunch at Blount Clam Shack. Our usual order of the giant lobster roll (currently $33 or $34), New Bedford fried scallop plate, hot dog. Spring Onion finished off with a unicorn ice cream from neighboring Wright Scoop. 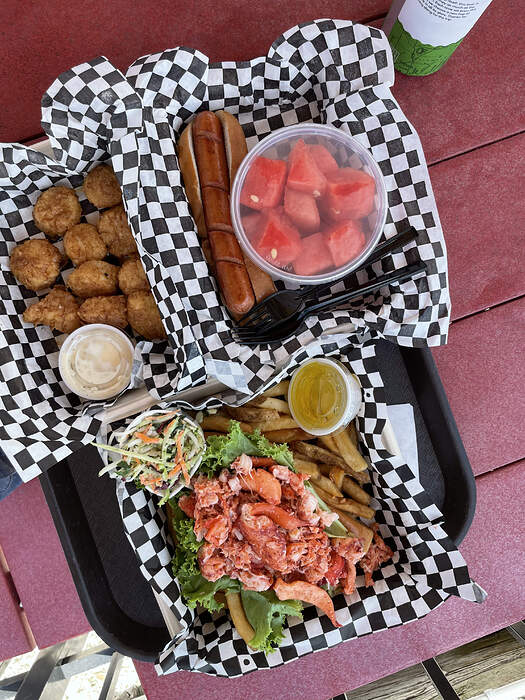 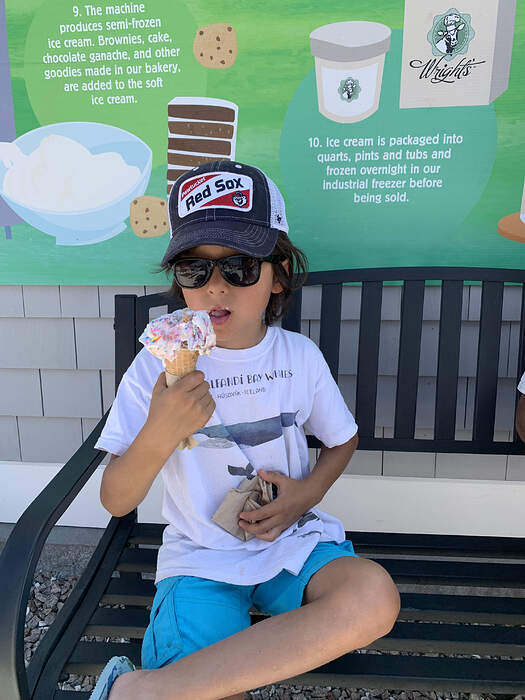 I visited a cool vintage shop down the street and bought 2 Eva Zeisel pieces. 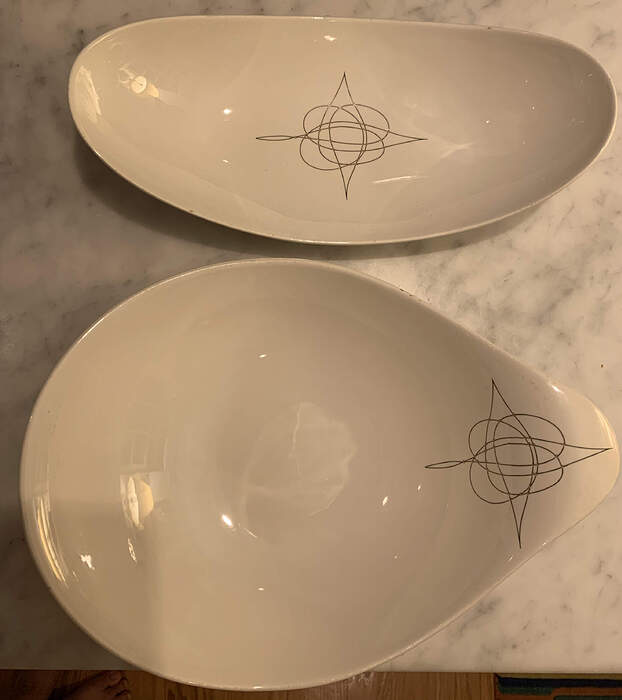 On Sunday, we headed to New Bedford, bolstered by the NYT article about New Bedford and the possibility of lunch at Cisco Brewery. Unbeknownst to us, the New Bedford Folk Festival was going on, so that added an especially festive element. We enjoyed ourselves immensely, wandering around, admiring the beautiful architecture and murals that abound, with live music wafting all around us. As a kid who frequented Southeast Mass quite a bit growing up, we never stopped in New Bedford so it was all new-to-me. We watched an engrossing film at the National Park Service Visitor Center and Spring Onion got his National Parks passport stamped, then we headed to the Whaling Museum. I saw this interesting Japanese poster from the 1960’s, entitled “Kujira wa kon’nani yaku ni tatsu,” which translates to “Whales are so Useful.” 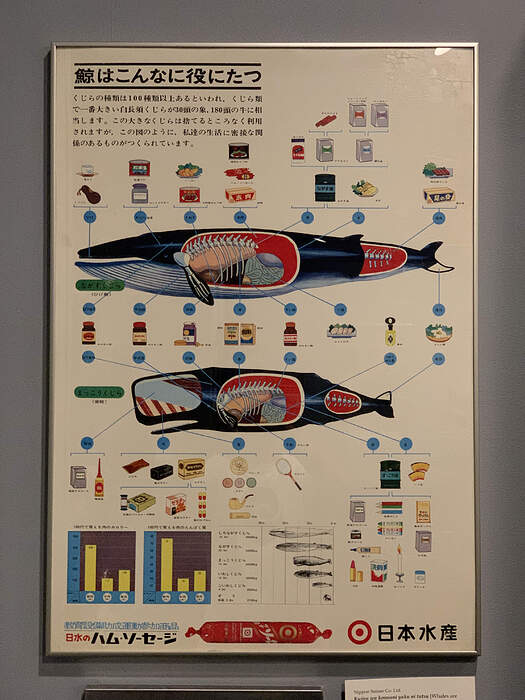 And even though this is not food-related, I figure, hell, if everyone else is doing it, I can also make “Not about food” posts (particularly in my own post). William Shattuck paintings were luminous. I was not familiar with him.

We did not expect the collection to be so large and found ourselves way overdue for lunch at nearly 2:30 pm. We called over to Cisco and were quoted 50 minutes for a party for 3 so we went to plan B - Quahog Republic Whaler’s Tavern. We’d been to the one in Onset years ago and enjoyed our meal there. Well, we were able to sit immediately outside and then discovered that there were only 2 servers working and they were slammed but at that point, we couldn’t find an alternative. The food was nothing special (although B’s fish and chips were decent - cornflake-crusted, so the crunch quotient was HIGH, which he loved). My cod cakes were sad - a hybrid between a RI-style clamcake and something trying to be a cod cake and I’ve had much better kale soups. I was glad that I only got the app size and the cup of soup (which was more like a thimble). Spring Onion enjoyed his pizza. The servers were great and making the best of a difficult situation (we left a VERY generous tip). Best of all, we chatted with our neighbors - a couple from JP who were also visiting for the day and we ended up having a lot in common and talked long after the food was gone. One of the two is a chef in food services for school-age kids (after leaving the restaurant biz but he didn’t want to say where he had worked). I didn’t quite hear where he is working, but he finds it much more rewarding and sane compared with restaurant work. The other is in health policy, so between the 4 of us, we found many things to talk about. And they are interested in traveling to Iceland, so that was another topic. We basically had to tear ourselves away and I was kicking myself for not getting their contact info. Anyway, that is something I missed about normal dining out - B and I are always ready to have a conversation with random people. Afterwards, we drove out to Cisco, to check out the scene and what a scene it is. It’s a huge site and very hectic. Loud live music. Quite different from the Nantucket or Boston Seaport locations (which are on smaller scales but equally hectic). Perhaps another time. 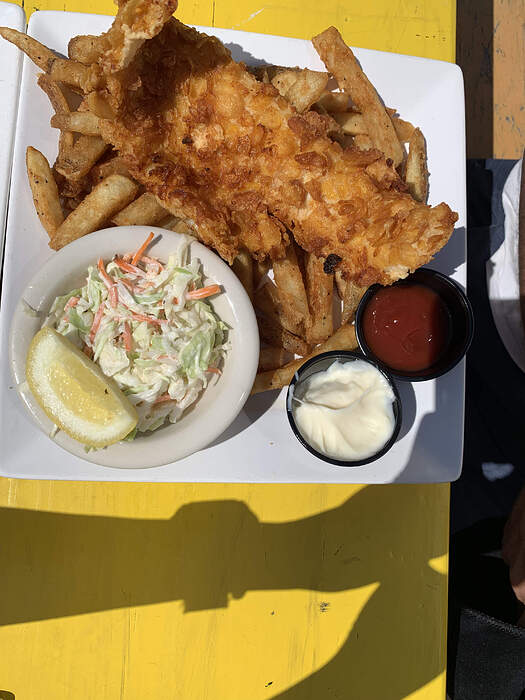 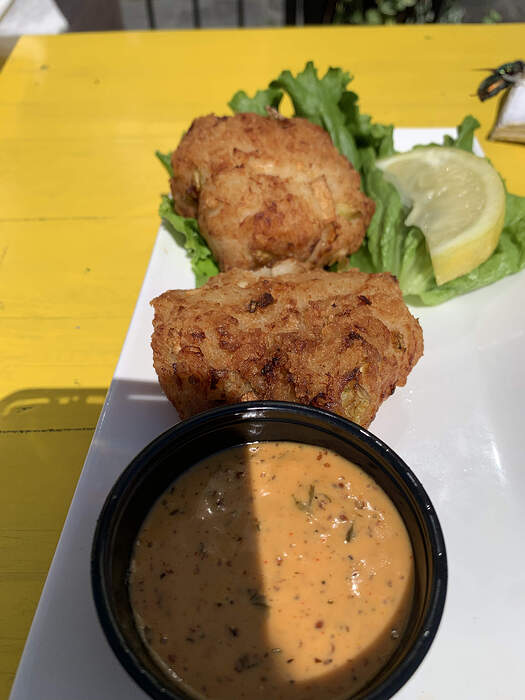 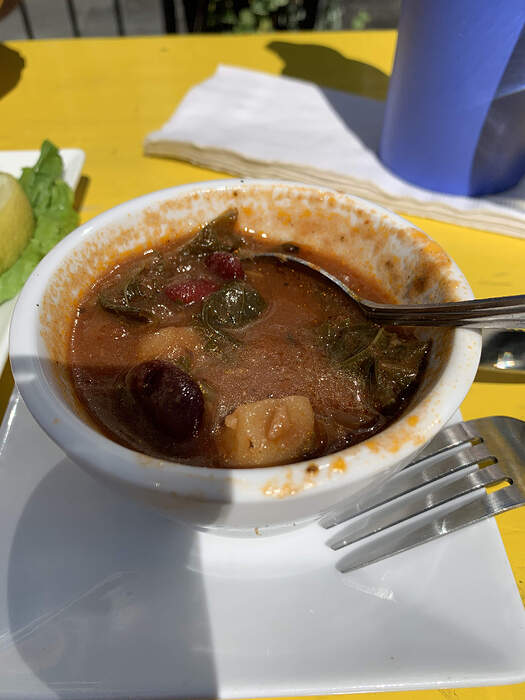 I visited a cool vintage shop down the street and bought 2 Eva Zeisel pieces.

That Eva Zeisel serveware looks like a real find!

Love how you tell a story and keep the focus on the food. Content that’s useful to others and moves the topic of conversation forward—keeps me reading and posting.

Because I’m taking a short break from work, it felt luxurious to meander today…a bit more than usual, even for me!

Love all the details. Thanks.

I’m a huge Eva Zeisel fan, and we knew her slightly. We’ve a vast collection of her work, including 4 full dinner sets, but I don’t have any pieces in the very nice “Fantasy” pattern you picked up. The shapes are from her “Tomorrow’s Classic” line from the 1950s (also more recently reissued by Crate and Barrel), but Hall China had different people decorate them since they didn’t think pure white china would sell at the time. One of my full sets is from the same line, but decorated a little gaudily with flowers. Still suitable for Easter and suchlike: 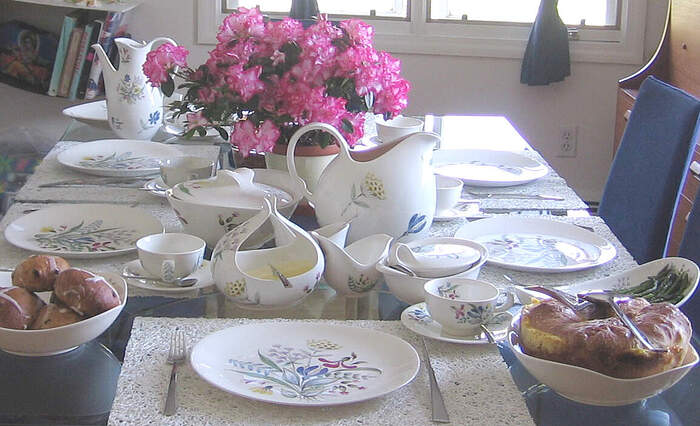 brunchtable21153×703 113 KB
To focus on food, on the bottom right is my version of an Italian Easter meat pie based on a recipe from my wife’s family and above it some asparagus. On the bottom left we have the obligatory hot-cross buns (store bought, probably from Flour).
8 Likes
Madrid July 13, 2022, 9:57pm #5

I have been lusting after the Eva Zeisel sauce boat for more than a decade now.

And the food looks great; more reasons to visit that area of RI after Labor Day. Except that first we are going to Eastport, Maine, $1,100 a week for a 2 BR, 2 bathroom condo on the water with views of Campobello, which we’ll visit by boat on a day trip for our son’s first trip outside the US.

Thanks for the detailed reports and also on Iceland.

Eastport, Maine, $1,100 a week for a 2 BR, 2 bathroom condo on the water with views of Campobello

I’ve never been that far down east. I’m sure it will be beautiful. And what a deal - $1100/week! Do report back if there are interesting food options.

Thank you, Digga. Especially like the Eva Zeisel finds, lovely. Quahog Republic has great people working their bars and as servers. The food is not the best but the experience overall is positive. Opinions based on Oncet location and their Dive Bar in Falmouth.