We all know about beans, rice, coins, pie chains, ceramic pie weights…
I saw today that white sugar is preferred by some bakers because after the sugar is baked, it is nicely flavored and adds to the appeal of sweets for which it is then used.

I’ve used metallic pie chains and beans in the past (well, I’ve used stainless steel knives as well…) Nowadays I blind bake without anything, as I’m baking a lot at the same time, weight option is impractical. But without weight blind baking needs several steps, including an empty freezer space to cold the dough before baking.

It’s method 3 in the video. The second method with flour can be interesting too.
Never tried sugar, only if I need extra sweetness or caramelized, but that gives an idea. To be clear, this is white sugar into the foil or parchment, not onto the dough.

For weightless weighting, use two identical pans. Sandwich the dough between them, invert the sandwich, and bake.

Smart - so you end up with what Stella Parks popularized as “toasted” sugar.

Do you have a link for where you saw the method? I’m guessing temperature is key.

Also, I’d be a bit nervous about emptying the sugar out at the end.

I use a fork to prick the bottom of the pie check it half way through the blind bake and tap down any bubbles in the crust and finish baking. I’ve used the sugar method several times successfully. I line the frozen tart shell with easy release foil and then a large coffee filter, then fill with sugar which takes more sugar than anticipated. As the aluminum foil cools down fairly rapidly, you can grab the edges and remove. I’ve used the now slightly toasted sugar for meringues but the sugar has a tendency to clump if not used within a reasonable amount of time. I’ve had pretty good luck just docking the frozen crust and tightly molding the foil to the crust.

Sugar is what I use. Stella Parks suggested it years ago and I’ve used it ever since.
However, I honestly think toasted sugar is a waste of time. I’ll never bother making it again except as a by-product of blind baking. There has never been an instance where I thought toasted sugar came through once it was in baked goods, and I’m pretty good at picking up flavors. Nor have I ever thought the supposed lessened sweetness that comes from toasting it was noticeable. 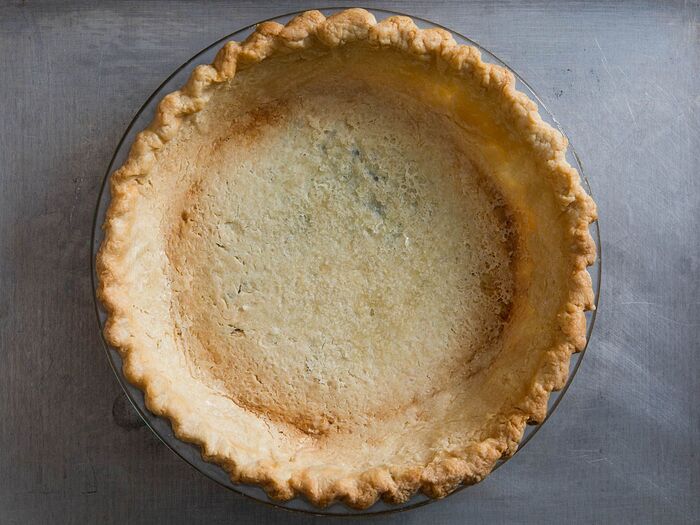 How to Blind Bake Pie Crust Without Weights

Blind-baking isn't difficult at all, but it does require the right technique.

I’m curious - why invert? Does the weight pan come free from the dough more readily in that case?

It’s inverted to keep the sides from slumping down. I think Rose Levy Berenbaum showed that technique in one of her books. It’s apparently particularly effective when used for small canapé tartlets…can’t say that I’ve tried it, but given pastry is pretty buttery, my guess is that they don’t stick.

Youtube: Glen and Friends. He was blind baking a crust for a rhubarb buttertart pie at 400°F BUT didn’t weight the parchment with sugar. He was just running through alternatives to ceramic pie weights when he mentioned using white sugar. BTW, the edges of his crust got way too brown; should have been 375°F. But the pie sounded outstanding.