Seems strange - Gaido’s has been getting very favorable mentions in recent discussions on Chowhound - for more than a year - and the chef is out?

This is puzzling. Gaido’s was really less than average for decades and now that a new young Gaido picked it up and dusted it off, he’s leaving. Their staffing is less than local flavor, but professional. Servers are brought from Poland, Romania and other Eastern European countries to serve for a few months at a time and rotated out seasonally. Yup, I’m in love with their soups especially. I wonder what is next for them. I went to the Pelican Club when it was still private, same as Gaido’s. It was a very ambitious move to open it to the public with very limited hours. Sorry it didn’t last.

Too bad swamp from Galveston hasn’t found us yet. He/she might have some insight.

I’ll go on a swamp hunt.

So it’s been almost a year. Anybody been since the shake-up? Reviews on YELP are all over the place.

I’ll go on a swamp hunt.

I’ll press the search for swamp. It would help to know if swamp is a male or a female, I suppose.

I haven’t been to Gaido’s lately, but I’m getting my poblano soup fix at Danton’s, spicy cream of poblano with lump crab, cheese and tortilla strips.

Love cream of poblano but I don’t think I’ve ever had it with crab. Sounds awesome.

So the family and I were attending a beach wedding in Galveston last weekend and we got down there a couple of hours early so we decided to hit Gaido’s.

It was about 3pm and the place was fairly empty. Maybe three or four other occupied tables.

True confession time: I hadn’t been to Gaido’s since the mid 80’s, maybe '85 or so. We got gloriously drunk back then, but thankfully they didn’t seem to remember me!

Everyone had a cocktail but me, (I was driving). I thought about just having oysters, (they were serving Blue Points), but everyone else starting ordering entrees.

One had the swordfish catch of the day over rice and under a nice pile of sweet crab.

Another had fried catfish that tasted very fresh and came with a pile of mediocre fries and some very good asparagus.

Another had a grilled fish dish, (I think).

I had two skewers of shrimp, one grilled and one blackened. I like the grilled better but both were good.

Our server was very professional, (Raymond?). Not at all the Eastern European blonde goddess I was promised above, but I’ll get over it.

Anyway, it was fine. Not disappointing but neither a real rave.

At least I know that it’s safe for me to go back now!

They stopped importing servers, don’t know why, but I went last month and our server was a local working her first day. Very sweet.

The past couple of times I’ve been they haven’t had that amazing poblano soup, but I had some last night at Danton’s along with $10/doz oysters in the happy hour bar. When I left, the orange and red were up by 2 and when I got home they had lost by 2. I mean, I should have had another dozen for luck. And I couldn’t get a picture while the bridge was orange. 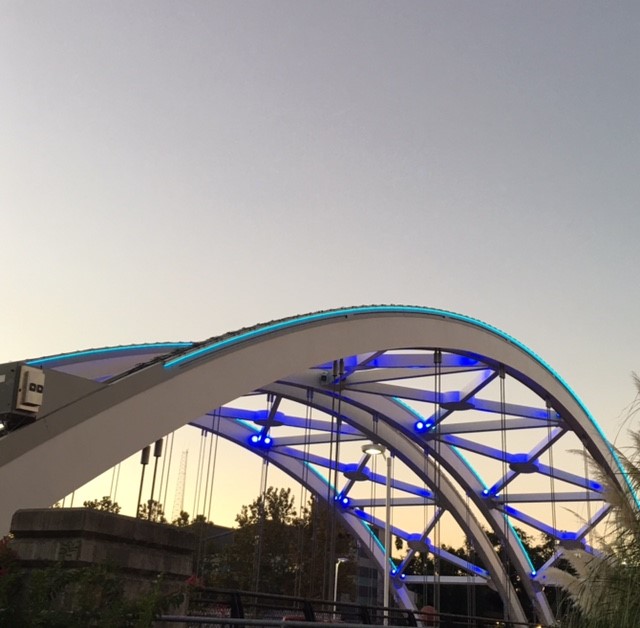 They stopped importing servers, don’t know why, but I went last month and our server was a local working her first day. Very sweet.

No more Polish servers, I’m boycotting and will be in Galveston soon. Second generation Pole here.

Actually I can’t drag the Wifeacita, or myself away from the blackened oysters, whole catfish and crabs at Benno’s.

Some were Polish, my DH would talk to them in their native tongue. He’s first generation American.