Last weekend we checked out this relatively new Laotian-Thai restaurant in Alameda. We were really impressed. It was fairly busy, but service was still pretty quick and very friendly. We were dining with a baby and they were very accommodating.

The nam khao (crispy rice salad) was just as good as our favorite version (at Vientiane Cafe in Oakland). Also had the khao piek (chicken noodle soup) and mok gai (spicy chicken steamed in banana leaf). Servings were generous, and it’s a nice space inside the restaurant.

Anyone else tried it? We want to go back to try the tapioca balls (sakoo) which they were already out of when we ate there. 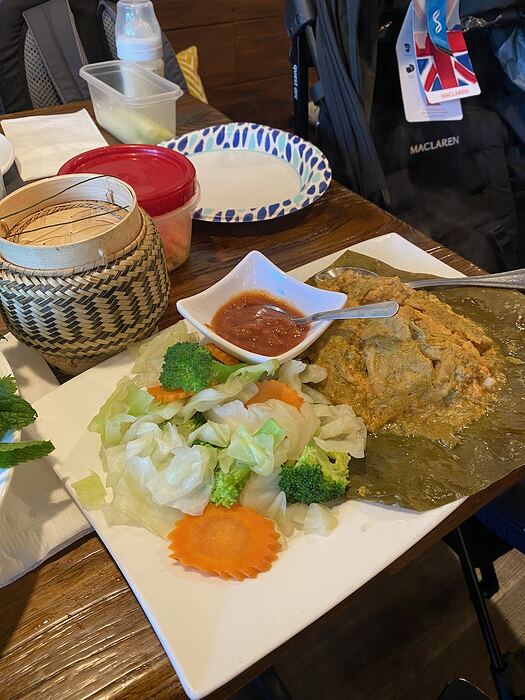 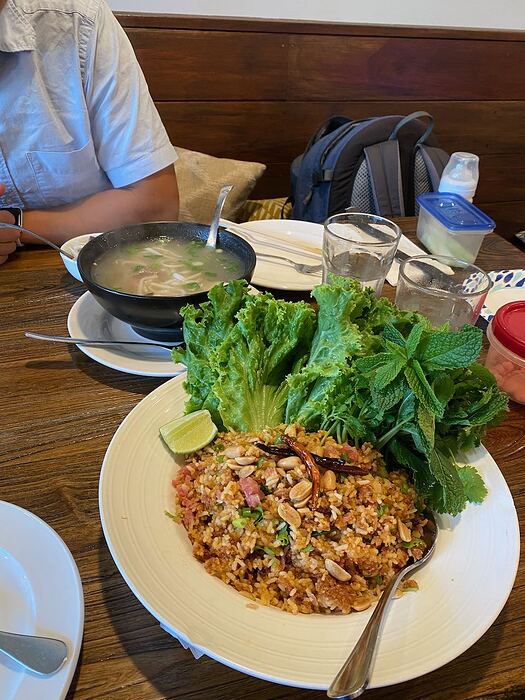 Lao place that cooks thai also because they are concerned that just lao isn’t enough to draw people in?

Not sure. I actually can’t think of any Laotian restaurants in the Bay Area that don’t also serve some Thai dishes. Seems pretty common, and I don’t mind it since they are often really good (for example, I really enjoy the Pad Thai at Vientian Cafe in Oakland).

There are also several restaurants that bill themselves as Thai, but also have some Lao dishes (Chai Thai in Oakland comes to mind)

We stumbled upon this place and really enjoyed it. We’ll be back for sure.

Question: can you give us an idea of how sweet the food is? Say, the Pad Thai (not our fav but it’ll give us a basepoint).

Spouse and I are finding the Thai restaurants these days are MUCH TOO SWEET.

Monkey Thai/Alameda is the closest we’ve found to the Thai restaurants that first appeared in SF in the 1980’s. Not Laotian but they are Northern Thai, which apparently is very similar. Very low on the sugar scale and really high on the chile scale, LOL.

Their housemade sai oua compares favorably to Vientian Cafe, altho the leftovers kept getting hotter every day. After 2 days in the fridge I had to leave the rest to my spouse, LOL. One of the few dishes that has ever reached a 9 on our personal scale of 10 chiles

They don’t do everything well (my Yelp rvw was dated 3/22/2022) but the good dishes have that punch of flavor not masked by excess sugar, that is so distinctive.

FYI I seem to recall in the early days of Laotian restaurants like Vientian, that it was said most Thai restaurants had Laotian cooks; but Thai was a more familiar connotation to Americans than Laotian, hence they ID’ed themselves and their dishes as Thai.

yes indeed; i believe this is owed to the cuisine of the North Thailand-Lao area being shared “Issan”, and marked much more by longstanding cultural similarity than by today’s political boundaries/definitions. Sort of like seeing Pakistani restaurants also trying to hawk “Northern Indian” on their marketing. And if it does bring in more folks who don’t know this distinction, why not?

BTW i did visit this restaurant earlier this year; delicious food and really friendly service despite being quite busy.

Kinda sorta, but not quite the same.

Also, no-one is trying to lure people in with the promise of Thai food, and then serve Lao food because the customers don’t know any better - which seems to be your implication. That’s not the dynamic at all.

Not my impplication at all, actually. Just going by what my friends & colleagues from the region tell me.