Many, but not all. The French here sounds a little clunky, don’t you think, when compared to the English translation, “Tempest in a teacup?”

Just wanted to add that ‘from the restaurant’s perspective’ it makes sense to gather the English speakers together so that they can assign the ‘better English speaking servers’ to that section. In principle it would provide better service to those guests.

Of course, no excuse for bad service in any section.

Appreciating that the restaurant might really wish to help the non-French speakers along, presumably in a city that attracts visitors from all over the globe, this kind of rationalizing for ghettoizing “English” speakers simply does not fly. If a Spanish, non-French speaking, customer arrives at a fine French restaurant, he does not expect to be put in a “section” with the other “foreigners.” In fact, he would resent such treatment too. Perhaps there is a waiter who speaks Spanish up there in the sweltering attic?

There is no restaurant “perspective” that justifies this “othering” of its customers. By definition, we all come from different cultures (assuming the smallest version of culture is the family), and people who travel have all kinds of reasons for traveling, so one ought to assume, until proven otherwise, that a guest in your restaurant will be as good a guest as they know how. And you should be as welcoming a host as you know how. Period. There should not be “sections” for different kinds of guests. Period. Used to be there were smoking “sections” in restaurants, and this was for obvious, I hope, reasons, but people who primarily speak a different language should not be put in a different section, as though they are noxious. If you have a waiter or two who speak some other languages, that is terrific to be able to help some customers along, if they are struggling, but not essential.

Of course, as a restaurant, you can make any decision you want about where to seat your guests, and what is preferential for you, and you can rationalize this any way you see fit. But please be clear that I appreciate knowing about restaurants that do this, so I can avoid them, as I find it, perhaps unconsciously, xenophobic and inexcusable.

true points there…
was it here that had a discussion about what makes a “tourist trap?”
sounds like we have a nominee.

Ort: Salzburg . . .
DW accompanied me on a business trip and we stopped at a ‘main drag’ Konditorei for coffee and a snack. Next table over a gaggle of American hen tourists complaining, loudly, about no soap in the hotel, no washcloths in the hotel, toilets impossible to flush . . .
and eventually about the lousy service.

Quite apparently they believed the waiter understood nothing they were saying - I’m thinking his English may have been better than theirs, , , but that’s another story.
However their harping and rude loudness did indeed provoke absolute minimum service.

As I recently told a friend, idiot tourists speak all languages!

In 1985 my wife and I were on our first trip to Paris, and for one dinner we went to a very popular (at the time) place in the sixth. Ground floor was buzzing. We were led upstairs to the English speaking ghetto. This was not what we had expected, of course, and it completely ruined the meal. Since then, if that does happen we ask to be seated in the “main” area. If that can’t be done, we leave. Also, since then, we avoid even considering restaurants where this is more likely than not to occur, e.g., Bistro Paul Bert.

Agree completely. And if I had been alone, I would almost certainly have left. But I was hosting a friend who had been looking forward to the meal, a French man, and though as we were handed the English menu, my instinct was to put it down and leave, I think it might have have seemed rude and petty to my friend, who hadn’t seen this before, and didn’t “get” it till later in the meal. But get it he did, of course!

I also thought that, it would be a gesture with no teeth, as the restaurant would have no doubt run my card that I had given when I made the reservation (counting me at that point arguably as a “no show”). So I would have paid for dinner, the restaurant would be paid, and I still would not have eaten dinner, which would have annoyed me. No good answer here except to avoid such restaurants that I know have this practice. Which I do. And to write of my experience in case there are others who also would wish to avoid such an experience. Which I did.

What place did you go to in DC, and what made it so bad? What did you eat there?

Bresca -
an eclectic four course tasting menu, two out of five inedible,
curiously, the tasting menu must be ordered for the entire party.

Thanks for the warning. I don’t care about Michelin stars - or rating systems in general, though it’s always fun to talk about, just like any good marketing scheme. I have not been to Bresca, and now I am much less likely to go.

Insisting the the whole table go for the tasting menu is not a curiosity in these parts.

One comment though: Bresca is not a dive bar, so I wondered what place you could be taking about. I guess the term means different things to different people.

This is my idea of a dive bar:
https://tinyurl.com/murn97c7

We loved the pressed duck at Bresca, but that was pre-Covid.

And sorry, I know this is the France forum! We just found out we are going to Paris in 2 months (thank you, business trip to London) so I’ll be lurking more here.

well, Mich stars are by no means the end of all things in eating. frankly I’m surprised so many really good places ‘get overlooked’ - particularly for a one star.

this was the early bar scene, from our seats. eventually the waitstaff could not get past the crowd standing at the bar - the noise was deafening - we could not converse at the table - no clue what the waitstaff had to say as they brought stuff out, impossible to hear them… 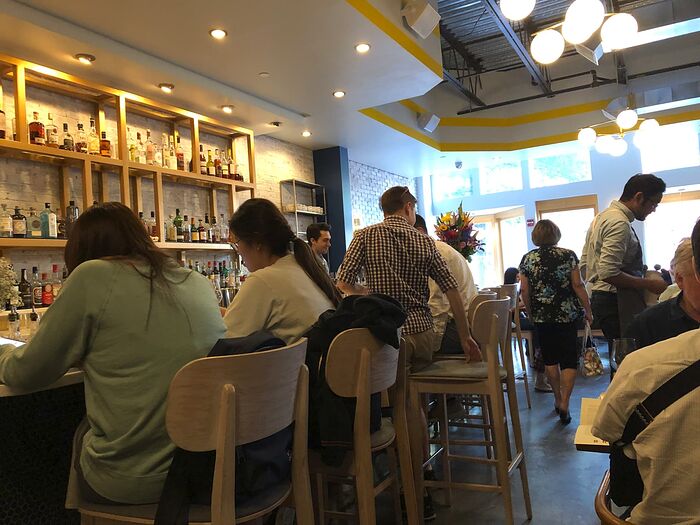 Noise in a restaurant nowadays is a feature, not a bug. I dislike it. Michelin puts a premium of precious plating. In DC, that’s the one thing which unites the starred restaurants.

I noticed (and appreciate) some pushback I received on my post suggesting that ‘putting English speakers in a separate section’ might be because some servers are more proficient in English.

‘Segregating’ diners because of background can certainly be a ‘slippery slope’.

First, I want to emphasize the last line of my original post:

“Of course, no excuse for bad service in any section.”

And, to amplify, if anyone chooses to sit (at an available table) in any section, of course that should be an option.

Looking back over my own dining history, indeed the worst service I have experienced (in both France and Spain, where I’m not fluent in the local language) has been in ‘English speaking ghettos’.

But I think the main point is the ‘level of service’ rather than the ‘ghetto itself’. I assume that I’ve also had excellent service in ‘ghettos’ without being aware that I had been ‘ghettoized’.

I’ve also had poor service in North America (which I speak mostly fluently) – there is no excuse for that anywhere.

I do totally support the clients right to be seated anywhere they choose – provided it does not impact the similar rights of other patrons.

I just noticed this thread as I am shortly going to post about my recent dining experiences in Paris. I can definitely sympathize. I have had the same horrible experience a couple of times over many years, so for a long time I have been very careful to avoid any restaurants that are especially popular with Americans.

I wasn’t aware that Flamel was one of these, but it was one of many places in Michelin that I looked up, and my reaction to the lunch menu was that it was overpriced and dull (the dinner menu looked better, but not for the price), enough to make me pass it by.

I have been to a few places over the years that were wonderful the first time, before they were widely discovered, but returning a couple of years later after Americans had found it and the French moved on, it was completely different.

Just for the record, I would never have left anything after such bad treatment, and as I am well aware that service is ALWAYS included in France, I would not ask whether it is.

Interesting, as the same thing happened to me in 1985. We arrived on May 1, when many (but by no means all) restaurants are closed. The hotel concierge sent us to Prunier Madeleine, where we were taken upstairs with all the other foreigners. I ordered tuna, and asked that it be cooked rare. It arrived grey, and the waiter claimed he thought I had ordered it well done. They did replace it but it took a long time and threw off the entire meal. Back then, I found that servers were skeptical if I ordered anything they perceived to be something Americans don’t like.

The problem with leaving if not seated where you want is where else are you going to go at the last minute without a reservation? Better to do the research in advance than be surprised.

A(n American) friend who lives in London visited a few weeks ago and got the same “tip is not included” from a server at Breizh Café in the Marais. She’s spent a lot of time in France and should have known better. Be careful!

“tip is not included” from a server at Breizh Café in the Marais.

Now just to think carefully in terms of language and the logic here, service is included (including the tax TVA) in France, but not tips (pourboire). So to say tip is not included is not wrong in a legal sense. Of course, the implication behind is another problem, given the circumstances.

Naf – you are correct in French, but in English, the two are thought of as the same. With all the American tourists at Breizh Café, I imagine that the waiter was aware of this distinction.

Tips are used in the US to subsidize waiter’s wages which are substandard (i.e., not a wage one can live off of); my understanding is that they are not substandard in France and so, as Parn has so often stressed, there is no need to leave them in France, except for (by American standards, anyway) relatively nominal amounts for exceptional service (or to curry favor for additional visits, I suppose).