Beto's Pizza in Pittsburgh, or "Ohio Valley-Style Pizza is Weird"

DH and I are in the middle of a three-day odyssey from NYC to northern Michigan and made our first stop in Pittsburgh today. As is our habit, I researched a bit to find a local specialty to sample, and stumbled upon a unique pizza known as Ohio Valley style. Beto’s is THE place in Pittsburgh for this delicacy, so we hit them up for lunch today.

I can honestly say that this was one of the strangest eating experiences of my life. Ohio Valley Pizza is a medium-thick, crispy pan crust cooked with sauce and a small amount of cheese, in HUGE pans that are eventually cut into 28 4" squares (7x4, so the pans are 28"x16"). After the pizza comes out, COLD, RAW (except for sausage) toppings are piled on. Raw onions. Raw peppers. Cold pepperoni. Cold anchovies. And most importantly, cold shredded provolone cheese.

You order this pizza by the “cut,” which at 4" square doesn’t seem that large when you envision it. Also, a cut costs less than $2, and toppings are just $.55 per, so I assumed these cuts would be a rather restrained affair. We ordered one cut each plus an appetizer sampler and waited with trepidation for the food to appear. 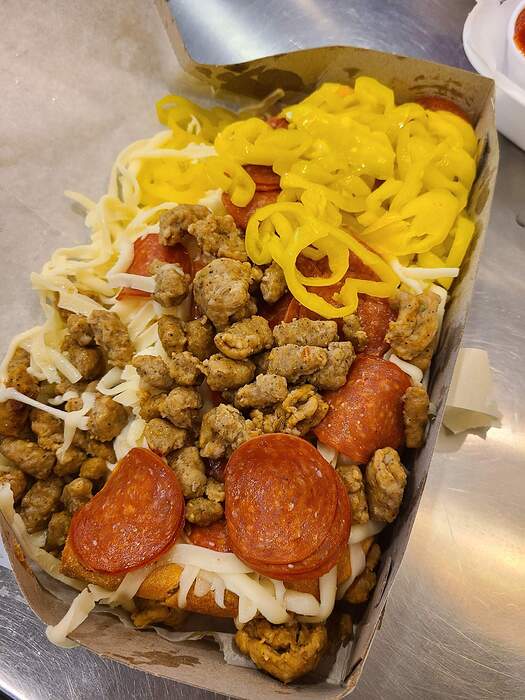 The box weighed at least two pounds. Under the mountain of banana peppers on my slice, I found another mountain of pepperoni- I would estimate 3 or 4 ounces. Not to mention the copious amount of unmelted cheese.

Needless to say, the appetizer sampler was unnecessary (and equally huge, though since it cost $11 I think the pizza delivers better bang for the buck). We dove into the pizza as only hungry roadtrippers can and immediately said to each other “hey, this doesn’t suck!”

Fresh out of the oven, the crust was crisp, sturdy and delicious, providing a perfect ballast for all the heavy toppings. I removed at least half of the banana peppers and they were still a bit overwhelming, but generally speaking, the first three or four bites were pretty good. DH’s sausage and pepperoni was even better.

Things went downhill thereafter. As the crust cooled and the toppings warmed, the appeal of the McDLT contrast factor disappeared, leaving us with a lukewarm, cloying clump of something that no longer tasted like pizza, or any other food I have ever experienced. Bite by bite, it got worse and worse. I like cold pizza, too, so it wasn’t just the temperature factor - it was some sort of reverse alchemy that transformed something tasty into something really NOT tasty, right before our very tongues.

Anyway, this should not be construed as a knock on Beto’s - their service was very good, and I’m confident that their pizza is excellent for what it is. But what it is is fucking weird. Consider yourself forewarned, should you find yourself in Pittsburgh with a hankering for pizza and $3 in your pocket.

I have been to Pittsburgh burbs at least 30 times and I didn’t know about this.

Frank’s Pizzeria in Ambridge north of Pittsburgh is the pizzeria my cousin likes. https://www.franks-pizzeria.com/

After the pizza comes out, COLD, RAW (except for sausage) toppings are piled on. Raw onions. Raw peppers. Cold pepperoni. Cold anchovies. And most importantly, cold shredded provolone cheese.

I’ve never seen this pile of glop driving from Coastal Mass to Central Ohio. My apologies for being disjointed. I have a 101.5° fever, test positive for Covid and I’'m drinking a bourbon Hot Toddy in 89° temps. Hoping to putmyself out of commission soon,

Maybe this is Pittsburgh’s equivalent?

I loved Beto’s pizza! It dates back to a time when it was tough to source cheese that reliably melted without burning at pizza oven temperatures. Even though Beto’s has walls covered with historic photos, there is no history lesson except the pizza itself. It’s well worth a trip.

I’ve had that kind of pizza and really liked it!

Don’t think they’re comparable (and I love that combination)

So weird. I grew up in Pittsburgh and I’ve never seen or heard of this.

Beto’s is THE place in Pittsburgh for this delicacy, so we hit them up for lunch today.

You are brave indeed. I recall that Beto’s is a love it or hate it thing. Plus now you have a story to tell! I don’t think that many people outside the region have heard of that pizza style. Hey, it’s not even common in western PA as others have noted.