My fave is the Shibuya Cube from After You in Bangkok - a stupendous buttery-sweet French toast on steroids. Copycats have sprung up from Singapore to Hong Kong, but NONE have approached the deliciousness of the original.
I fly to Bangkok just for it - this pic from Christmas Eve 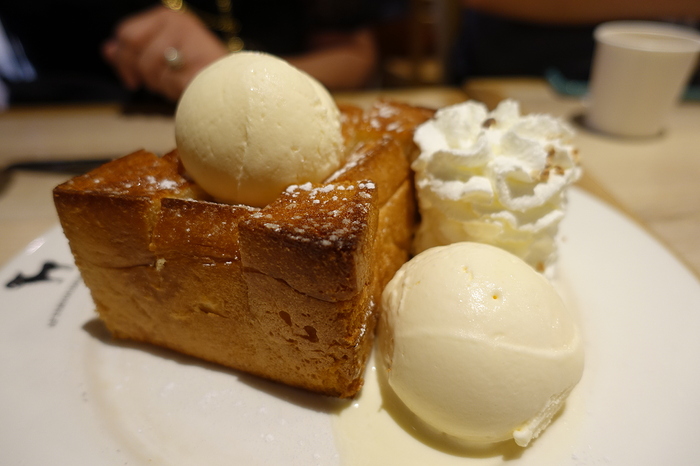 I concur! It would be neat to hear what everyone ate everywhere that was their favorite thing.

I’m in Aruba but I do truly love it. It’s also my life goal to retire on that happy little island, so having the local fare just makes me feel a little bit closer to my eventual “home” I guess.

You thinking about a place close to the Chicago outfits casino down there ? I hear the Daley’s are there often…

At least you will be able to get a Chicago style hot dog.

Whatever happened to Larry the Lobster?

Interesting that a lot of the comments have focused on the how, and why, and the with whom of the food…as opposed to the overall knock-your-socks off of the dish itself. I will continue in that vein.

First, just a couple weeks ago with my daughter at Del Posto in NYC. I received a timely offer for a “dinner with Lidia” As it turned out my daughter had just written a blog post for a course she is taking at Rutgers talking about how Lidia was her favorite chef, so in her words:

"I didn’t watch much TV growing up. We only had one in the house, and my dad was usually watching sports or some crime show that I was too afraid to watch. Sometimes, though, we would watch the cooking channel. Lidia reminded me of my aunts, so she was my favorite. I loved to watch her effortlessly roll out pasta dough on her spianatoia. “Tutti a tavola a mangiare!” was probably the first (polite) Italian phrase I learned.

I have a picture somewhere of me dressed up as a gladiator, holding a sword, with Lidia on in the background. I think it is a very fitting picture. I also have this picture from the time I met Lidia at a book signing. I cried a little. 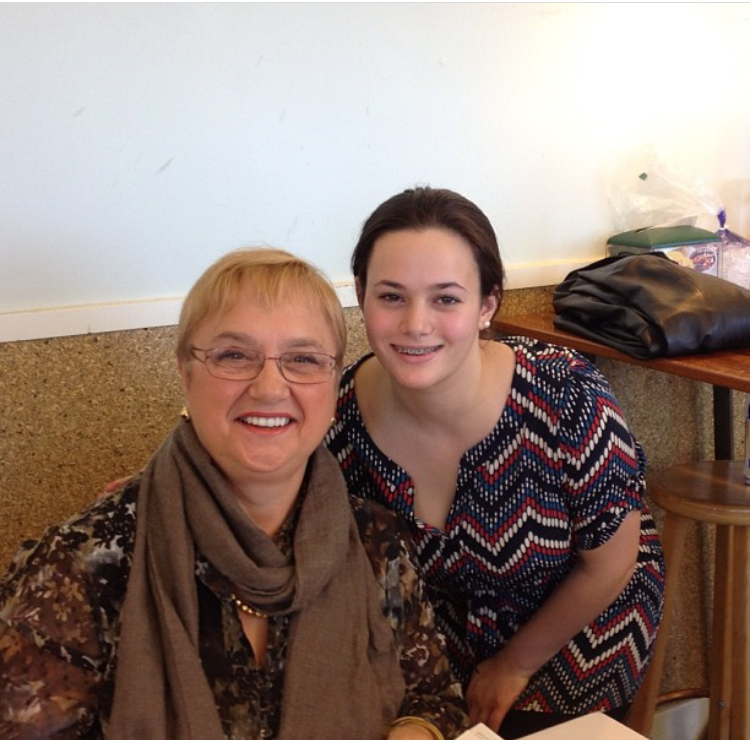 I think I’ve read every single one of Lidia’s cookbooks, cover to cover. I idolize her a bit. When I told my cousin, who worked in the restaurant business, that my dream job was to work for Lidia, he told me that she had a reputation in the industry for being notoriously difficult to work with. It burst my bubble, but only a little bit. I still fantasize(d) about travelling through Italy with Lidia, trying different dishes and doing research for her many restaurants and cookbooks…"

At that dinner (which btw, was ridiculously good from soup to nuts) they served 100 layer lasagne. When we saw that on the menu we both thought there was a bit of hyperbole involved, but no…we stopped counting at 50 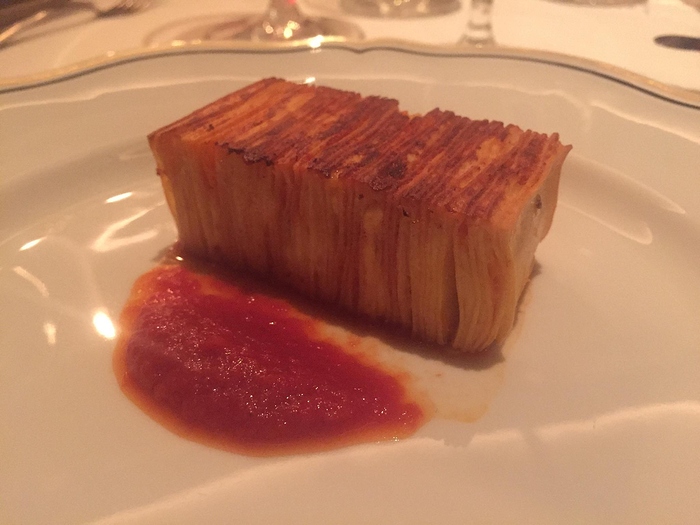 There would be my single favorite dish of 2016.

My single favorite NJ dish would be homemade tautog (blackfish) ceviche. The fish was caught with my son, and the recipe was given to me by a Peruvian friend. Lots of love in this dish as well: 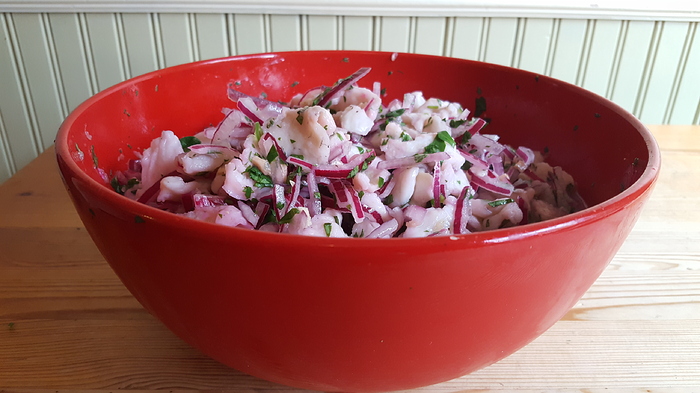 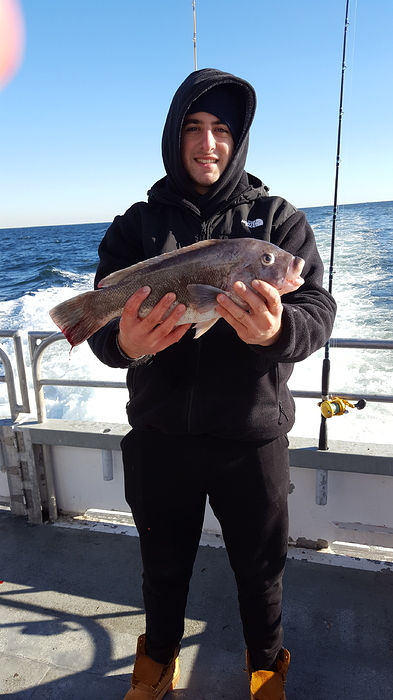 So there you have it, honorable mention would go to any number of meals at our kitchen table, or Barnacle’s or B2 bistro (the horror, I know… :D) where the 4 of us were together to enjoy a meal.

@NotJrvedivici where do you stay in aruba? I’ve only been once and although nice, I prefer other islands a lot more. Maybe I missed the hotspots but where I was, it was way too commercialized for my tastes. I stayed at the Marriott stellaris I think…the one down toward the right end if looking out at the ocean. It had a casino.

I have a few decent dishes…will report back.

No, no shellfish. I did cut the pieces a little bigger there just to see what it would taste like. I also left the onion a little thicker than usual as well. Probably leave the bigger pieces of fish, and slice the onion thinner next time.

Yeah, not much room for cheese in there. Very lightly sauced and bechamel inside. Then cut and seared in a pan prior to service.

Wow–this is always so hard! I have to say that my NJ favorites from this year definitely include:

More as I think of them…

The tautog ceviche looks amazing. I used to think the fish had to be caught yourself since I never see any in fish markets. Belford Co-op sells them.

They mainly head to chinatown. The smaller illegal fish pull the most money per pound (live.) The bigger ones don’t fetch as much. People will pay higher dollar for flounder and cod. Flounder was 14.99 a pound at food town 2 days ago…crazy.

Top meal of the year was at Hen of the Wood in Waterbury VT. I got wifey to buy into seeing my favorite band up in Burlington and booked a nice AirB&B on a 35 acre farm in nearby Shelburne and the promise of some fine dining and fun. I was blown away by this place (they have another in Burlington), and we opted for the more organic restaurant in Waterbury, as we spent a long weekend in VT visiting with friends and exploring new places.

As for the dinner? The smoked Hanger Steak with a nice crumple of Jasper Hill Farm Blue Cheese with a Kale gratin was memorable. The cider glazed turnips that I ordered as an extra side was outstanding (then again we both love fresh beets). A starter of fried oysters with lemon and parsley were simply delicious.

The capper? Having Hill Farmstead IPA on tap. For those who have ever quaffed a Heady Topper out of VT and been blown away, try a Hill Farmstead Edward, the next time you’re up in their neck of the woods. Amazing, beautiful beer.

The Beekeeper pizza at Taululas is simply outstanding. Order it almost every other time I visit there. I do love their quirky reuben sandwich as well. 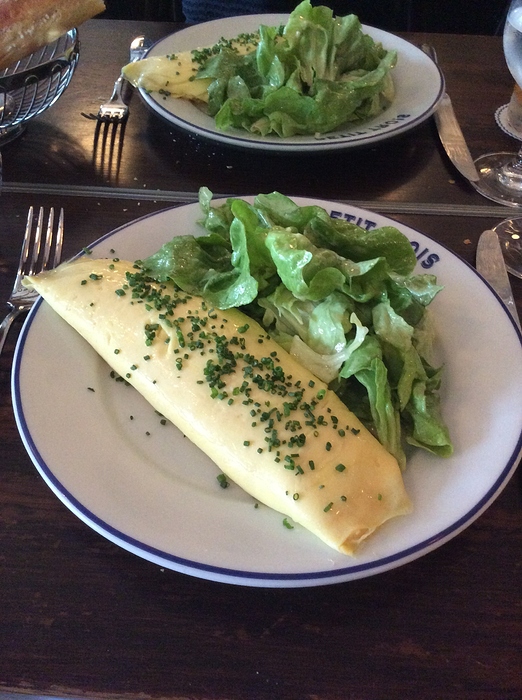 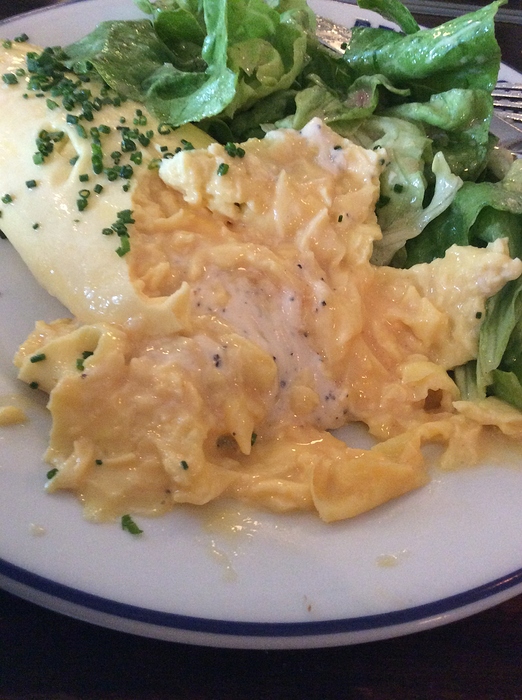 The very best thing I ate this year.

Looks great the omelet, what is the white cream?

As I’ve been travelling in Asia this year I’ll pick one from each country I’ve been to.

It is Boursain cheese! Not fancy at all.

Wow, Din Tai Fung in Taiwan. I would love to try that. I’ve been to the one in Orange County and loved it.

After a lot of thinking… you know it’s difficult!

I think finally I think it’s this who win my heart in 2016, it’s a pastry but it’s a dish too, no?! This Yuzu lemon tart by Christophe Michalak tart got the taste, the look, the texture (soft, slightly crunchy with the meringue, very crunchy with the sugar in the biscuit base) everything! The best lemon tart I have ever ate. More about it here:

A few days ago, I finally bought a cake for both of our birthdays! His in October and mine in early November! We were too busy to even do anything until now. So hooray for this Yuzu lemon tart from Christophe Michalak. [image] I love lemon tart and could make a pretty decent one. This one is one of the best I have ever ate! (the second best one is from Pierre Hermé) [image] The crumble tart base is excellent, I don’t know how technically one can do it, but in the crumble, there is actually…