We sometimes get notices in the mail, as it seems to be required by law, informing us of new restaurants selling alcohol in the vicinity. The other day we got one saying a restaurant called Bon Chon operated by Pham Enterprise, LLC would be opening in Downtown Berkeley.

Anyone heard about a Bon Chon chicken opening in Berkeley?

This post was mentioned in the East Bay Express: http://m.eastbayexpress.com/WhatTheFork/archives/2016/09/14/mid-week-menu-shiba-ramen-is-coming-to-downtown-oakland

Cool, thanks for sharing!

You’re now famous! (I was thrilled to see the mention and the link.)

Walked by there today and saw “Bonchon chicken, coming soon” banner hanging up.

saw what looked like a Bon Chon sign on an abandoned storefront on W. capitol expressway & ?, same shopping complex where 85 bakery and Hoki Poki is…

Bonchon is now open, as reported by the Daily Cal. I haven’t stopped in yet but I took pictures of the menu while walking by. 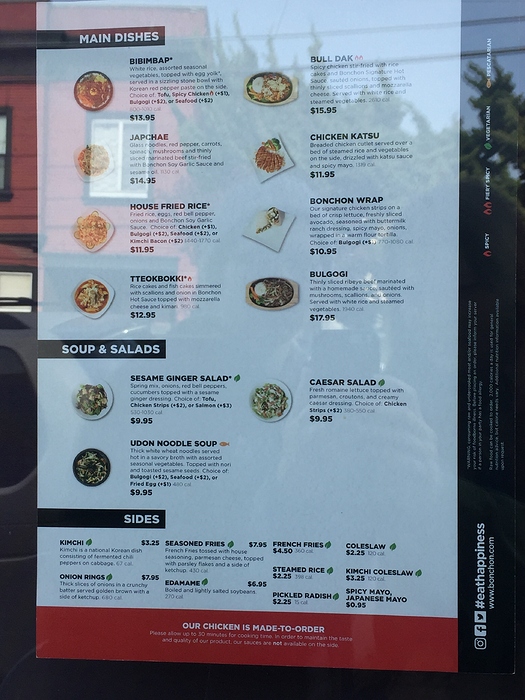 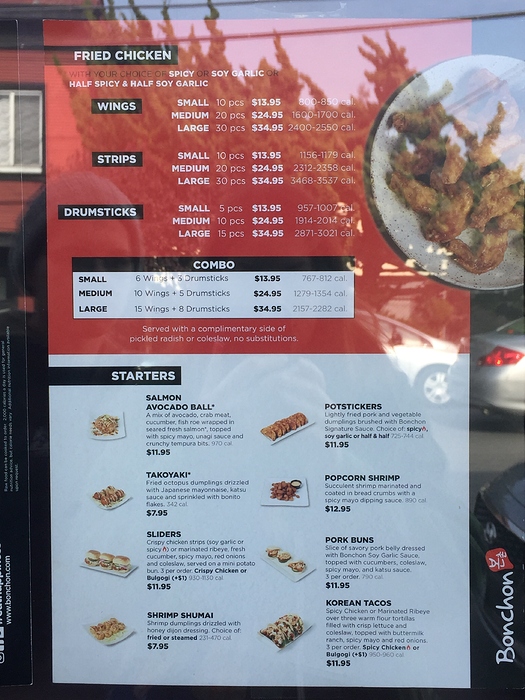 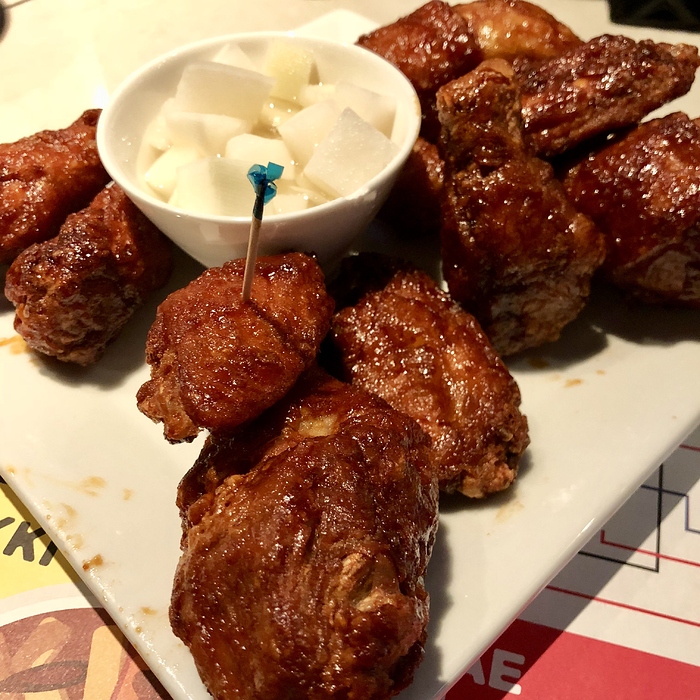 I recently enjoyed the KFC from the Berkeley Bonchon branch. It wasn’t packed like it was opening week at 5:30 and I got the wings and drumsticks (they also have tenders) in soy-garlic and spicy. These were my favorite KFC in the Bay Area since my first taste of FuseBox (subsequent samplings at happy hours were gloopier and sweeter than I had remembered). The chicken is very well fried–either double fried or steamed then fried so that the fat has rendered off the skin leaving it thin and extremely crispy, and the chicken still moist. The thin layer of sauce didn’t diminish the crispiness much, even on the leftovers I took home. I’d probably order only spicy next time. It isn’t very spicy, but is a nicely balanced sauce. Not that there was anything wrong with soy-garlic, it just seemed weaker in comparison. I suppose I should try other menu items, but I’l have to go with a large group, as I can’t imagine not getting the chicken next time. There is a happy hour discount on beer, which includes some California IPAs.

I like the soy garlic version better. We had ours from the Mountain View branch. As @tm.tm mentioned, they were well fried with a thin crispy skin. I didn’t have the chicken with beer but I suspect that the spicy chili version goes better with beer since the spicing were more in your face whereas the soy garlic was a bit more laid back and . Luke Tsai’s blurb this week on SF Mag said that they were double fried.

Also had the bibimbap, japchae, and Korean tacos. The bibimbaps and japchae were decent. I am having these as leftovers right now as I typed. I don’t think they were better than a typical Korean joint in Oakland or Santa Clara, however. But its nice to have options other than KFC. Or, one can order a plate of KFC and a bowl of white rice like the guy at the next table, and call it a day. 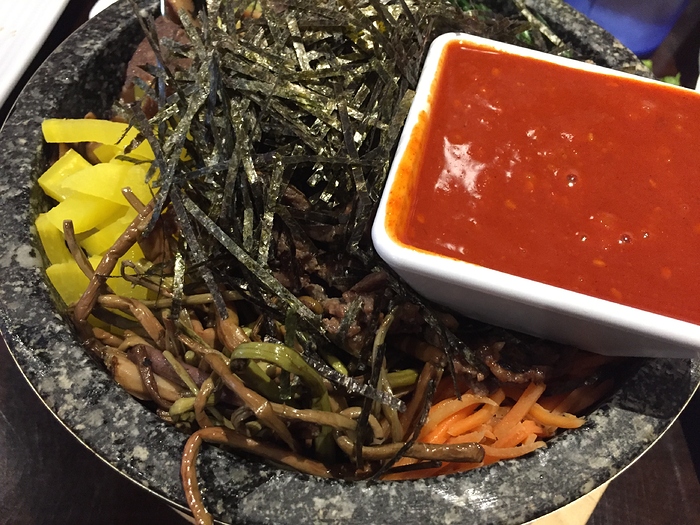 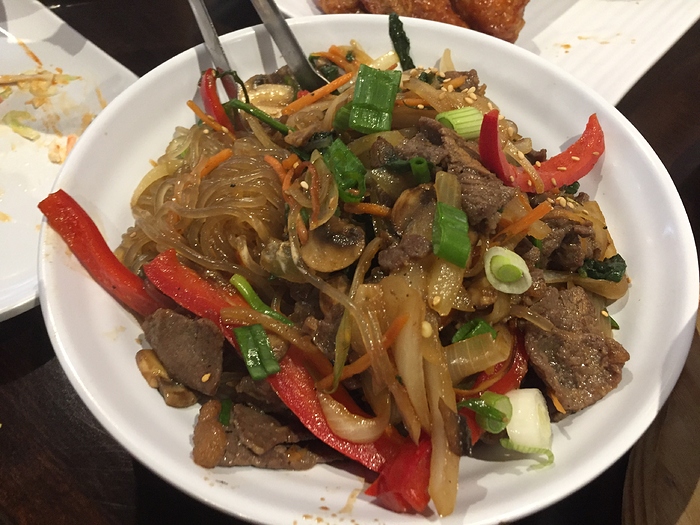 The Korean tacos (3 in an order) with spiced chicken were massive and massively disappointing. The tortillas were bland, the chicken was dry and tough, and the tacos were overdoused with sauces. I like Roy Choi’s version but these were totally different. 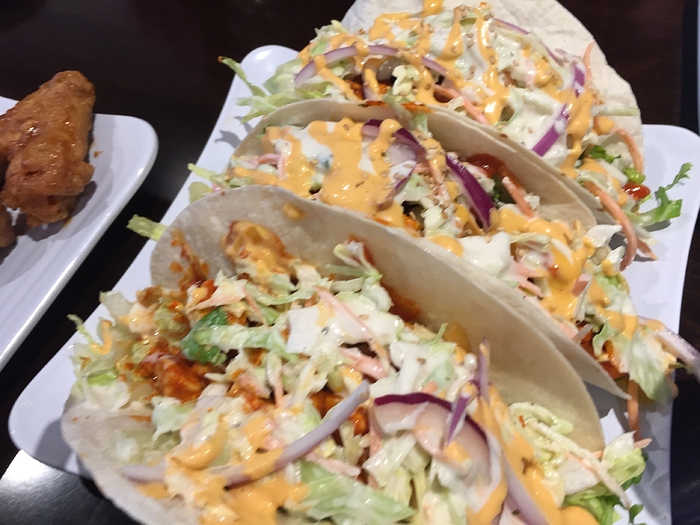 The chicken I tried from the Berkeley location (mooched from someone’s takeout) was pretty bad (well even bad fried chicken is still pretty good), and the skin was incredibly thick. Is there a secret “bad chicken” menu option to avoid?

the skin was incredibly thick

What’s going in with Dan sung sa’s chicken in Oakland? Their skin feels super thick, but it’s awesome in its own way and doesn’t lose crispness after sitting overnight, sauced, in the fridge.

The guy I mooched from liked it (it was the soy garlic) and liked thick skin so I’m thinking it’s intentional? I much prefer the chicken from the unfortunately named Korean Souel BBQ on Shattuck near Berkeley/Oakland, though they aren’t exactly walking distance to Bonchon.

I prefer Korean fried chicken which use smaller chicken. I have been to one place where they use very large drumstick and everything. It wasn’t bad, but not my type. I wonder if this is why some has thin/thick skin. Afterall, the skin of a chicken shouldn’t be controlled by cooking technique.

I do remember the drumstick I tried being a bit oversized but the skin being thick included the batter.

Yeah, it could be just coincidence in my case. Huge drumsticks and large chicken pieces in that particular place, and the skin also thick. By the way, I find Bonchon quality can be quiet different from one store to another store. They don’t have QC down like American fried chicken franchises.

i did not enjoy this chicken at all. as others have mentioned, the drumsticks are huge. i got a combo of wings and drumsticks and barely ate my fill. all the flavor seemed on the thick, crunchy shell, with extremely dry and under seasoned meat. these huge drumsticks were as dry and unpleasant to me as overcooked chicken breast. the wings fared better by ratio of meat to surface.

if someone put a choice of the spicy vs the soy garlic flavor in front of me and i was hungry i’d opt for the latter. the rest of my order is in the backseat of my friend’s car. he seemed to like it just fine. he’s welcome to it.

i did not enjoy this chicken at all.

What do you mean by “this”? Bon Chon in Berkeley? That would be unfortunately. I have tried two Bon Chon places. One in New Jersey, and the other in Philly. The one in New Jersey is better, but neither served huge drumsticks. Some of the other things you have described may be universal true for Korean Fried Chicken. For example, they don’t usually come in huge portion, so you may not get your fill if you are used to American fried chicken.

I tried the combo wings. Whoever said the spicy isn’t very spicy, I have to disagree. I was okay with it, but my friend could barely eat them. It think the garlic soy has more flavor. Has anyone tried the shrimp shumai or the pork buns? I can see stopping by again after a Trader Joe’s run.

Sorry, yes I meant the Berkeley location. It’s true that I do prefer american southern style fried chicken. I think it’s because my Korean mother left the chicken frying to my Georgia born and raised father. But if the chicken at bonchon yesterday was any good I would’ve devoured all 5 legs and however many wings all by myself, hot or cold. I just can’t find anything positive to say about it.