We’ve been on the look out for a new regular Indian restaurant ever since Hamro Aangan in Albany changed ownership and the service and quality of food went down hill.

P.S. Anyone know what happened to Bishnu, former owner of Hamro Aangan? If he opened up a new place, I would be very interested to go there.

For years, I was a regular at Kabana Restaurant (Pakistani) on University Ave. near San Pablo Ave. in West Berkeley for my favorite dish, tandoori catfish (about $11). Not a fancy setting but bold spicing and in your price range. I was also a fan of their bindi masala (dry fried okra in spices) when available as a special.

Food writer Jonathan Kauffman, formerly of the East Bay Express and now at the SF Chronicle, has favored the goat curry. Recent ‘Y’ reviews are almost all positive.

Have you tried Vik’s Chaat on 4th Street in Berkeley? Not exactly chicken tikka masala but very good. They specialize in chaat which is a category of street food.

Some things I like there are the cholle bhature, dahi batata puri, chicken kathi roll, and lamb baida roti. Their dosas are pretty good too.

Don’t know where Bishnu went but we, too, would be eager to find out. Sigh, so hard to keep up where the good cooks are these days!

We didn’t know he had sold; no wonder Aangan’s cooking has changed.

Priya on University at Addison has an excellent buffet, lunch and dinner. There’s a large variety of dishes that I’ve never seen elsewhere. They often have a tasty (but bony) goat curry. Chicken tikka masala is usually available. $11.99 for the buffet.

Down the street, I’ve had good meals at Indus, a Pakistani place. Most dishes are under $15.

Back on Solano, House of Curries at Curtis has some of my favorite combination lunches. They also have goat. Heated patio in front. Prices around $12.

A short video clip of tandoori catfish at Kabana from 2013 at its previous location. I doubt that the presentation has changed:

Thank you all for the suggestions. I’ll give them a shot!

The chef at Jotmahal worked for years at Kabana but I haven’t been there yet. The prices look very reasonable.

Another edit added: Oh, I found this post in the yelp reviews that the original poster might appreciate -

3/18/2018
Really delicious chicken Tikka Masala, veggie korma, lamb biryani and samosa chaat. We have been looking for a new go-to since Hamro Aangan changed ownership, and this place may be our new spot! 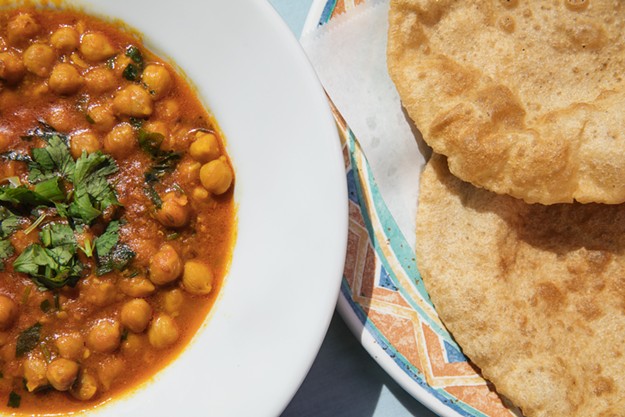 Beyond its typical curry house standards, the restaurant serves some hard-to-find Punjabi specialties.

Another of Jotmahal’s specialties that you won’t find at many other Indian restaurants is the Punjabi saag. This was a heavily spiced version of the creamy spinach dish that every Indian restaurant serves — except made with mustard greens instead of spinach, yielding a purée that was a darker shade of green, and had a smoother texture and a bolder, earthier flavor. Sometimes you’ll see the dish listed on menus as sarson ka saag, and it’s traditionally served with a kind of griddled corn-flour flatbread called maki di roti — a tortilla-like bread I’ve only seen at one other East Bay restaurant (as a weekend special at Masala Cuisine in Deep East Oakland).

I’ve actually given Jotmahal a try. Only once though. The food was okay but the portions were very small. The naan had a weird taste, like baking soda. According to Luke Tsai review, maybe we just ordered wrong.

I don’t think we’ll ever go back because the service was pretty terrible. Not only did the food take forever, but there was so much confusion clearly going on in the kitchen that things seemed to come out that were never ordered in the first place to other tables. Our waitress also forgot things several times over and seemed very inexperienced. The restaurant was not busy at all on this particular night so there was not a clear explanation for all the issues and it was at least a year after they first opened.