Thought I posted this before but could not find it.

It will be busy in the next couple of days for KFC Japan. 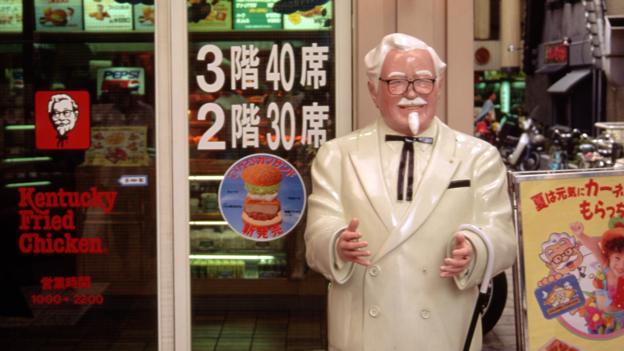 Why Japan celebrates Christmas with KFC

Every Christmas, Ryohei Ando gathers his family together for a holiday tradition. Just like their father did as a child, his two children will reach deep into a red-and-white bucket and pick out the best piece of fried chicken they can find.

Yes, it’s a Merry KFC Christmas for the Ando family. It may seem odd anywhere outside Japan, but Ando’s family and millions of others would never let a Christmas go by without Kentucky Fried Chicken. Every Christmas season an estimated 3.6 million Japanese families treat themselves to fried chicken from the American fast-food chain, in what has become a nationwide tradition.

“My kids, they think it’s natural,” says Ando, a 40-year-old in the marketing department of a Tokyo sporting goods company.

While millions do celebrate Christmas with KFC, others in Japan treat it as a romantic holiday similar to Valentine’s Day, and couples mark the occasion with dinner in upscale restaurants. For other Japanese families, Christmas is acknowledged but not celebrated in any particular way.

But for those who do partake, it’s not as simple as walking in and ordering. December is a busy month for KFC in Japan – daily sales at some restaurants during the Christmas period can be 10 times their usual take. Getting the KFC special Christmas dinner often requires ordering it weeks in advance, and those who didn’t will wait in line, sometimes for hours.

The genesis of Japan’s KFC tradition is a tale of corporate promotion that any business heading to Japan ought to study, one that sounds almost like a holiday parable.

According to KFC Japan spokeswoman Motoichi Nakatani, it started thanks to Takeshi Okawara, the manager of the first KFC in the country. Shortly after it opened in 1970, Okawara woke up at midnight and jotted down an idea that came to him in a dream: a “party barrel” to be sold on Christmas.

Okawara dreamed up the idea after overhearing a couple of foreigners in his store talk about how they missed having turkey for Christmas, according to Nakatani. Okawara hoped a Christmas dinner of fried chicken could be a fine substitute, and so he began marketing his Party Barrel as a way to celebrate the holiday.

In 1974, KFC took the marketing plan national, calling it Kurisumasu ni wa Kentakkii, or Kentucky for Christmas. It took off quickly, and so did the Harvard-educated Okawara, who climbed through the company ranks and served as president and CEO of Kentucky Fried Chicken Japan from 1984 to 2002.

The Party Barrel for Christmas became almost immediately a national phenomenon, says Joonas Rokka, associate professor of marketing at Emlyon Business School in France. He has studied the KFC Christmas in Japan as a model promotions campaign.

“It filled a void,” Rokka says. “There was no tradition of Christmas in Japan, and so KFC came in and said, this is what you should do on Christmas.”

Advertisements for the company’s Christmas meals show happy Japanese families crowding around barrels of fried chicken. But it’s not just breasts and thighs – the meals have morphed into special family meal-sized boxes filled with chicken, cake, and wine. This year, the company is selling Kentucky Christmas dinner packages that range from a box of chicken for 3,780 yen, ($32), up to a “premium” whole-roasted chicken and sides for 5,800 yen. According to KFC, the packages account for about a third of the chain’s yearly sales in Japan.

It also helped that the stores dressed up the company mascot, the smiling white-haired Colonel Sanders, in Santa outfits. In a country that puts high value on its elders, the red satin-suited Sanders soon became a symbol of a holiday.

‘One of the strangest things I’ve heard’

This phenomenon is unique to Japan – and can seem strange to some outside the country. The idea is unlikely to take off in the home of KFC, says Kevin Gillespie, chef of two restaurants in Atlanta, Georgia.

“KFC on Christmas. It’s one of the strangest things I’ve heard,” Gillespie says. “If you brought a bucket of fried chicken to Christmas dinner, honestly, I’d be mad at you.”

It isn’t a crack on KFC’s products necessarily, says Gillespie. The general idea of bringing fast food to Christmas dinner “would be viewed as rude by most anyone,” Gillespie says.

In Japan, however, where around 1% of the population is Christian, Christmas isn’t an official holiday, Rokka says. So the idea that families are going to spend all day cooking a ham or turkey and side dishes just isn’t practical. Instead, they show up with a bucket of chicken.

“This is another sign of globalisation, where consumer rituals spread to other countries and often get translated in different ways,” Rokka says. “It’s not abnormal now to have an Ikea store everywhere in the world. This KFC for Christmas is just taking our consumerism and turning it into a holiday.”

An excuse for a reunion

Having done some travelling abroad, Ando knows that his country might is alone in celebrating Christmas with a bucket of KFC. But for him, he sees the tradition as more than just a company promotion.

For Ando, he’s still planning to get KFC for his kids this year. But he goes to a bakery for the Christmas cake. On Christmas night, the family will gather around the KFC bucket, just as Ando once did as a child, and just as his children will do in another generation.

“It’s kind of a symbol of family reunion,” Ando says. “It’s not about the chicken. It’s about getting the family together, and then there just happens to be chicken as part of it.”

While millions do celebrate Christmas with KFC, others in Japan treat it as a romantic holiday similar to Valentine’s Day, and couples mark the occasion with dinner in upscale restaurants. For other Japanese families, Christmas is acknowledged but not celebrated in any particular way.

If so, why does this article feature a two column wide photo of people bustling about under a boulevard decorated in Christmas lighting?