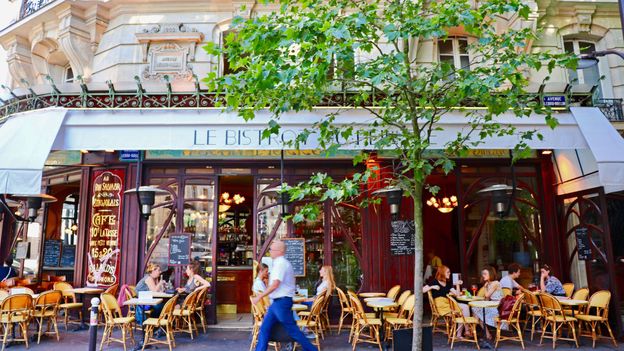 Is the iconic Parisian bistro dying?

In Paris, the bistro bar has become a way of life, but the iconic institution may be in danger of becoming lost to changing dining habits, foreign influences and new technology.

I’ve been talking with a few friends from different parts of the world about a completely separate issue, but reading this makes me wonder if they are connected. Air-BnB (and other short term rental channels) . . . we think it is quietly ruining our favorite cities by driving out locals (our theory). Popular tourist cities (NYC, Paris, Venice, etc) are having large percentages of properties being purchased, not for locals to live in, but for people to rent out, short term, via Air BnB for investment purposes. This then drives the prices up, because now properties aren’t seen as places for people to live but as small business, and drives locals out, because they can’t afford the properties.

So I have to wonder if the reduction of bistro’s is a result of the new generations not wanting that style of dining or if there is just a dramatic reduction in locals to support them . . . .

PS - we (friends and I) have all used Air BnB while traveling so also talk about how we are contributing to the problem . . . . just for the record.

So I have to wonder if the reduction of bistro’s is a result of the new generations not wanting that style of dining or if there is just a dramatic reduction in locals to support them . . . .

Wow, I don’t have the answer but you may be on to something. Sad if full-time residents are being displaced by short-term rentals (which we ourselves have used) but I can sure see how this could be an unintended consequence.

Brasseries have a come back, at least in Paris. Several new ones especially Brouillon Pigalle is doing very well. The recent trend was to open very big brasserie and to serve good but simple dishes aiming at the younger people who has more limited budget.

Is the iconic Parisian bistro dying?

These types of catchy titles appear every other year with NYT or in the English press. The other title that comes up frequently: Is French cuisine dead?

LOL, I guess this sells papers and fit the stereotype.

Not sure if Airbnb is the major contributing factor. France has been hardly hit with the terrorists attacks. For a few years, tourists avoid coming to France, all restaurants (cafés, bistrots, restaurants, 3-stars restaurants, hotels…) suffer. Then there is the economy crisis, unemployment etc., people watch their wallet. There were 200,000 bistrots in 1960’s and in 2014 only 34.669, and 1300 in Paris. A study said bistrots do better in rural area than in Paris. I guess one of the factor is that people’s taste in food changed and they don’t attach like the older generations in the same place to eat anymore.

Bistros also change its form, there are the newer neo bistrots which is the main force of bistronomy movement. I think to exist, bistrots have to renew itself to match the pace of the society.

Nothing, however, beat the value of the bistro plat du jour. And then the French restaurants in the States sell the same bistro food for 5x the money.

If people aren’t eating at Bistros, where are they eating at then? I can’t imagine bad economy alone cause that many bistros to close…

If people aren’t eating at Bistros, where are they eating at then? I can’t imagine bad economy alone cause that many bistros to close…

People are eating a lot more non French food. Burgers, kebab, sushi, Chinese, Vietnamese to name the more main stream eateries. 1419 Mc Donald’s in France, second highest in Europe, just behind 1476 in Germany. These days, street foods, gourmet sandwiches, ramen and pizza places are some of the latest trend in Paris. There are also much more wine bars and tapas style places.