So from what I’m seeing I do not believe this is related to the Basille’s in Freehold & Jamesburg but rather a new place by the identical name. While I have yet to go, a co-worker told me about their Monday & Tuesday night specials, 3 course meal (eat in only) for $ 10pp !!! Can’t beat that, from what my co-worker said the food was good!

Web site below - just passing a long what seems to be a good find. Just think for 1 Butchers Block steak, I can feed a family of 10 a 3 course meal!!!

I see one of the choices for the 3 course is chicken francaise over pasta - note, not mashed potatoes, so I am game to try one

I am a huge fan of them labeling that first course as a nice salad!!!

believe this is the family behind “artichoke bastilles” fame who have had show on tv and are pretty well known. I used to go to the original spot in Staten Island- the first spot was quite good and known for value. Looking fwd to trying this spot.

yeah they had a nice family red sauce joint in SI before the kids of the fam headed to NYC to open a slice joint after the original place closed and the rest is history. It (the SI spot) fell off a bit when they tried to go a bit upmarket after a redo. Need to try this spot soon- hoping it’s good even if it’s just the pizza; anything else would be a a plus.

There’s nothing NICE about olives in anything. #IHaveSpoken

If this is the same people as the Staten Island location, my parents were regulars, and even after they first moved to NJ (in the same spot Carraba’s was once located in, after the Spaghetti Western days if memory serves me). The husband was Vito and I forget the wife’s name. I assume this place is the children’s operation.

On Staten Island, they did not have a liquor license (rare) I was told, but would give a complimentary glass of red wine to each adult. My parents got to know them well and got more than one glass of wine.

I only ate at the first NJ location once. Barely remember as I must have been four or five. My parents had not seen them in a while, and I remember Vito picking me up and literally passing me from one staff member to the next. Good memories. Then they closed rather abruptly (within a week or two) of that visit and that was that. My parents were kind of ticked that he didn’t say anything and they never tried one of their other locations (they had one in Long Branch too I think).

The Middletown location you mention was originally Bassile’s then Spaghetti Western was after that. Bassile’s built that location out, however they were the same owners as Freehold and Jamesburg. So if it’s the kids, why don’t they mention the other locations / history? It could be, the only reason I said it wasn’t was because they make no mention of it on their web site which I find odd.

Basille’s Pizza was established in 1988 in Staten Island. Basille’s grew to be one of the island’s most popular pizza destinations, drawing lines of loyal customers who appreciated the consistent taste of our signature Italian food. Now by the same owners and family, open in Middletown, NJ.

With 25 years of experience cooking in family restaurants, our owner/pizza master, Dominick Basile, is excited to present his vision to you and all our guests.

The name Dominick does not ring a bell but I had assumed it was the son.

Yeah I read that, to me at least it sounds like they are announcing their entrance to the Jersey market. I would have said something like the same “family as our other NJ locations etc.” could just be the way I’m reading it though.

I did business with them back in the day, when they opened Middletown and the other locations, I think Freehold was first if memory serves me correct. It’s a good 20 years ago at this point.

I don’t know about Jamesburg, but the restaurant in Freehold is Basile’s (with one “L”). The new place in Middletown is Basille’s (with two "L"s). Thus, not likely the same operation despite the similarity in name.

That’s why we keep you around!

I am summoning tolerance for your obviously wrong statement. Likely with years of dedicated work through therapy, I’m confident we can overcome this hurdle.

What’s wrong with you people with personal attacks over the lowly olive?

Isn’t there some sort of moderator around?

It’s not like this is a life and death matter involving the Genco Olive Oil Company. 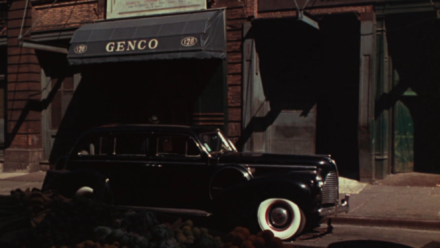 DON CICCIO Right Before VITO CORELONE Gets His Revenge and Puts a Knife in His GUT Killing the Man Who had VITO’S entire Family Murdered     GENCO OLIVE OIL Co. Owned by VITO…

I will definitely have to give this ten dollar meal a shot.

I want to try this. I have a feeling this is a lot of food!