Had a lunch and a dinner at Barzotto at Valencia and 24th in the Mission, in the former St. Vincent space. A block away from the 24th St. Mission Bart station.

Casual service - you order and pay at the counter and get a transponder that you put on your table. They have a semi open kitchen where you can watch them making pasta with the machines. Barzotto kind of reminds me of the now closed Porcellino in Noe Valley, some similarities being the order at the counter service with self serve water and utensils, Cal-Italian menu, and ice cream for dessert.

Porchetta Plate ($16) - Good. Crispy skin. Sometimes the skin/crust is a little too chewy, but this was crunchy all the way through. Part of the meat was a little dry, but the salsa verde like sauce that came with it helped with that. Also came with applesauce, a grilled lemon, and a giardiniera of pickled cauliflower, peppers, olives, and carrots. 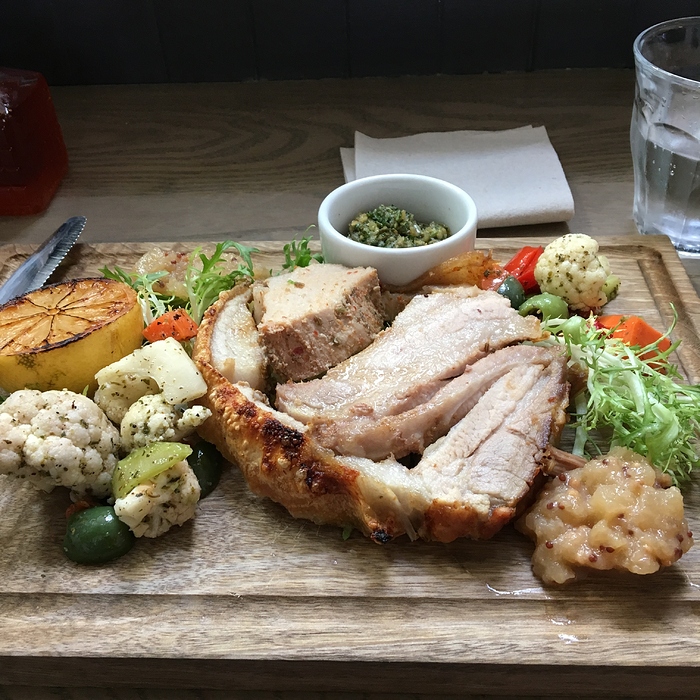 Little Gems Salad ($11)
Not bad, the yogurt vinaigrette was maybe a little too understated. Had watermelon radish and pickles. 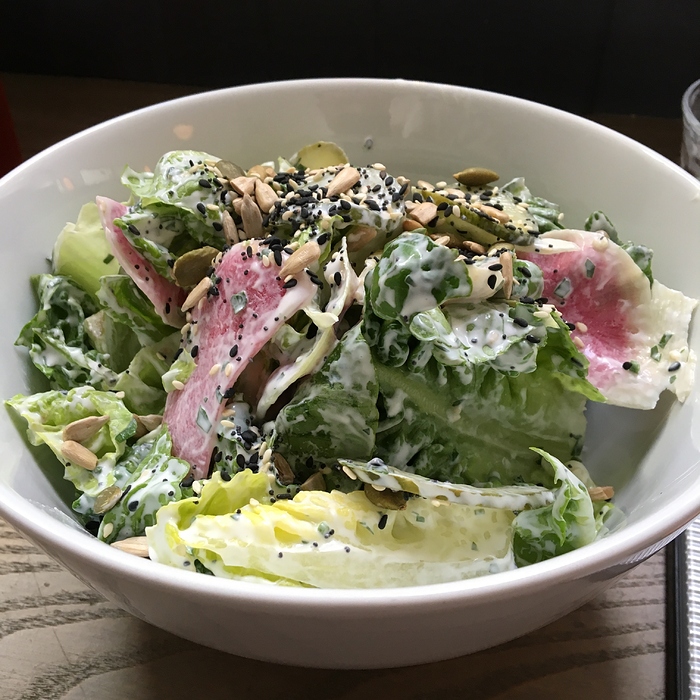 Turkey Meatballs ($8)
Ok as turkey meatballs go. Had a little bit of leafy vegetable inside. Spinach maybe? A little too dense, which I’m guessing may be due to the leanness of turkey. 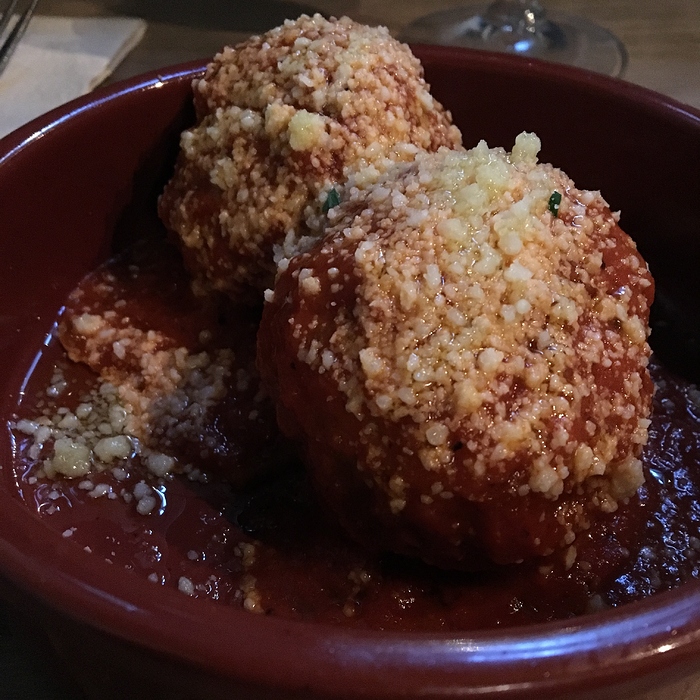 Bucatini ($15)
Quite good. Hollow bucatini cooked well, al dente. Tomato sauce had a bit of chili heat and little salty bits of pancetta. Basically a bucatini all’amatriciana. My favorite of the dishes I tried here. 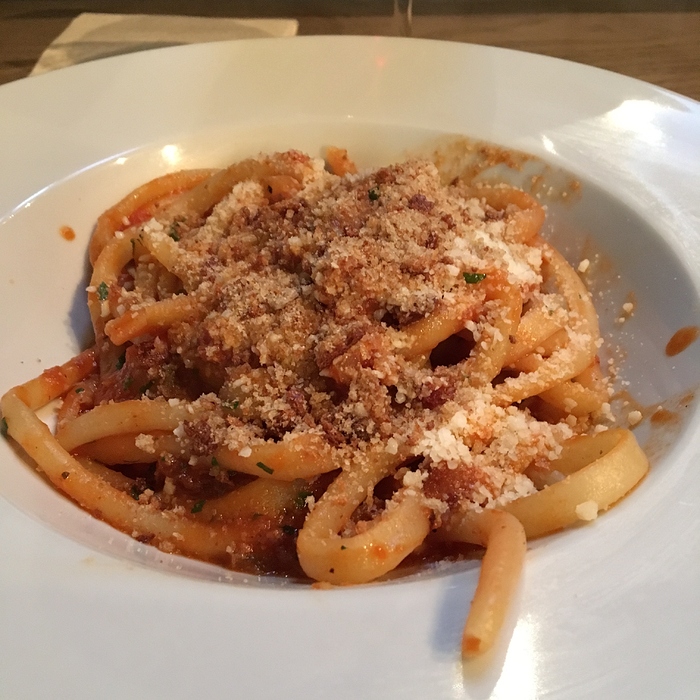 They also have wines by the glass at $10, and pasta to go. Looking to try some more of the pasta from here as it seems to be its focus. 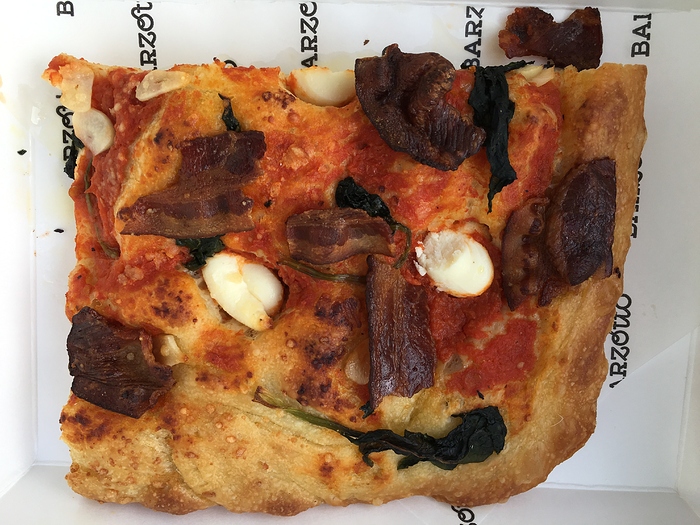 I got a slice of the tasty roman style square pizza today. It’s a lunch only item, one type per day, a bit under $4. Soft, olive oil soaked undercrust, less crunchy than a Sicilian slice. It’s not too tall, so the flavors from top to bottom meld without a doughy interruption. It’s more focaccia-like than the pizza al taglio at Adesso, and doesn’t have as strong a distinction between the center and outer crust as whatever it is called at PiQ.

Today’s pizza had bacon on top, which adds meat to the nearby lunchtime places for topped bready things- next door Arizmendi, with their focaccia selections and eclectic rotating daily special of vegetarian sourdough thin crust pizza slices, and Lucca’s deli on Valencia and 22nd, which sells Luguria bakery’s focaccia. Pi Bar, which sells NYish style pizza, doesn’t open till 3:14pm.

Maybe for a different thread, but where else does one find good pizza al taglio in the city?

As far as I know, Barzotto is the only place in SF that has it. Though, they call it “Roman style” and the two people at the front didn’t recognize the name “pizza al taglio” and described it as having a similar dough to focaccia. If someone has eaten pizza al taglio in Rome ( @tm.tm ?) I’d like to hear them weigh in the options in the East Bay or Barzotto’s version. Authentic or not, I enjoyed it plenty and will get it again.

FWIW, the slice I had at about noon was fresh— they had a sample slice in the front, and the slice I got came from the kitchen. Later in the day, at about 2pm, I’ve seen them place a bunch of tired looking ones in the front.

I dug up an old Chowhound thread about pizza al taglio. Only a handful of places were mentioned, including the ones you listed. Barzotto has a more reasonable price. Not too excited about relatively small slice of pizza al taglio at other places priced like a full sandwich…

I dug up an old Chowhound thread about pizza al taglio. Only a handful of places were mentioned, including the ones you listed. Barzotto has a more reasonable price. Not too excited about relatively small slice of pizza al taglio at other places priced like a full sandwich…

The slice I got was a good buy! My lunch that day was about $7 (plus a buck in the tip jar)-- Barzotto’s pizza and a $3 slice at Arizmendi (Arizemeni’s foccaccia would be a better comparison, but I’m not a fan and they seem to only have that early and late in the day).

Has anyone else tried their handmade pastas? I’ve been hearing a lot of mixed reviews lately and have read at least a handful online which criticize their sauces as being overly watery and pasta cooked well beyond al dente…

My intel is pretty out of date, as I ate a couple pizza al taglio slices back in ‘99, and never again (well, I’ve been back, but ignored the pizza al taglio places). The chowhound thread covers it pretty well. To me looking for pizza al taglio was as sensible as looking for 7-11 style taquitos. Even as young, poorly informed students we quickly realized that pizza at sit-down places was much better, not terribly expensive, and you could get jugs of wine along with it. Al taglio was a last resort when needing a quick bite near a train station, as it had poorer toppings, and is kind of bready, sometimes even floppy.
It sounds like this Pizzarium in Rome was a real game-changer though, with thicker focaccia-like slices. Your picture looks like it could be based on pizza bianca, a very crisp, well-salted and olive-oiled focaccia which I did enjoy quite a bit as I lived near Forno Campo de’ Fiori.
I haven’t tried it, but Jules Thin Crust Pizza in Rockridge also has a version of pizza al taglio, though their online menu only lists prices for whole pies.
Speaking of online menus perhaps not matching current offerings, I’ve never stopped by Adesso, though I’ve occasionally considered it as a late-night option on my way home I end up looking for their menu and seeing nothing but drinks, salumi, panini, and cheese. In the posted version arancini of pork ragu is the only thing I’d consider a cooked item. Is this really the case, or is their online menu not fully representative?

Is this really the case, or is their online menu not fully representative?

They changed their menu in recent years, but it’s always been more salumi and snack focused than their sister restaurant Dopo, which now is a Sicilian restaurant

Even as young, poorly informed students we quickly realized that pizza at sit-down places was much better, not terribly expensive, and you could get jugs of wine along with it. Al taglio was a last resort when needing a quick bite near a train station, as it had poorer toppings, and is kind of bready, sometimes even floppy.

Maybe the comparison should be with other fastfood, like gyros, burgers? Al taglios probably suffer a bit if there isn’t a large flow of customers to keep them fresh.

I can now answer my own question as I’ve ordered in from them several times since my last post, and I believe I’ve tried every pasta on the menu thus far. I’ve enjoyed almost all of them.