Since I just mentioned it in another thread, I thought I’d give Barrio Costero some love via its own thread. They refer to themselves as ‘coastal’ Mexican, and the decor (and bathrooms–don’t miss those!) definitely reflect that. This is one of those AP restaurants that isn’t always on my radar, and then I go and wonder why–maybe because it’s a tad too creative for some of my friends? Who knows?

What I can tell you is that this place has a serious tequila and mezcal list, a very good cocktail program, and some of the most interesting plates in the area. Their ceviche and fish tacos are spot on, and I’ve loved their octopus preparation each time. And I honestly don’t know that you’ll find prettier presentations anywhere in Monmouth County. Maybe it’s the black plates that make everything pop, but dish after dish will arrive and you’ll ooh and ahh just from the colors.

If there’s one complaint I hear over and over again, it’s about their ‘small plates’ concept. As in, the first time I went, I was with two guys who appreciate good food. Between the three of us, we shared 6-7 plates AND WE REALLY LIKED WHAT WE ATE. But I don’t think the door had closed behind us when one of them said “Okay, so where are we going to order the pizza from?”

I heard where he was coming from, as it felt a little like we had shared a few apps but never got to dinner. And yet, we also weren’t feeling stuffed, and that’s really not a bad thing, imo.

While I haven’t taken enough advantage of it, they’ve been doing great happy hour specials and (iirc) Tuesdays are $10 for a margarita and 2 tacos, which is a damn good deal. Don’t know if that’s a seasonal thing, but I’d say don’t wait to give it a try!

Another on of my favorites, I don’t mind the small plates at all as long as the quality is there.

Awesome, we are headed there on Sunday. Thanks for the suggestion!

I popped in on a Saturday a month or so back and was lucky to get a table due to a cancellation. Fun place for sure. Had a couple of margaritas and you get to select the type of salt you want on the glass…cool concept. The food … I wasn’t sold on it, but also didn’t try much of the menu. The duck pozole was terrific. I don’t recall the other plates we ordered, but I don’t recall anything else I tried to be notable (I liked the chips and salsa). I found the steak tacos overly “chewy.” Would return for drinks and to give the food another try.

We went yesterday for an early dinner. Cool spot and my husband was obsessed with his drink. The food isn’t cheap and the portions aren’t big but the attention to detail, quality and taste justify the slightly higher prices. The drinks are standard pricing (and a good all day happy hour on Sundays). We ordered guacamole, chicken tacos, fish tacos and pulled pork dish (unreal, but likely to be pulled from the menu soon). He had a happy hour margarita and a drink off the regular menu and I think it was $70 pre tax. We would definitely go back. Just like @CurlzNJ noted, we didn’t walk out stuffed but I was OK with that. Worth a try.

Not sure if this will work, but I’m gonna try: 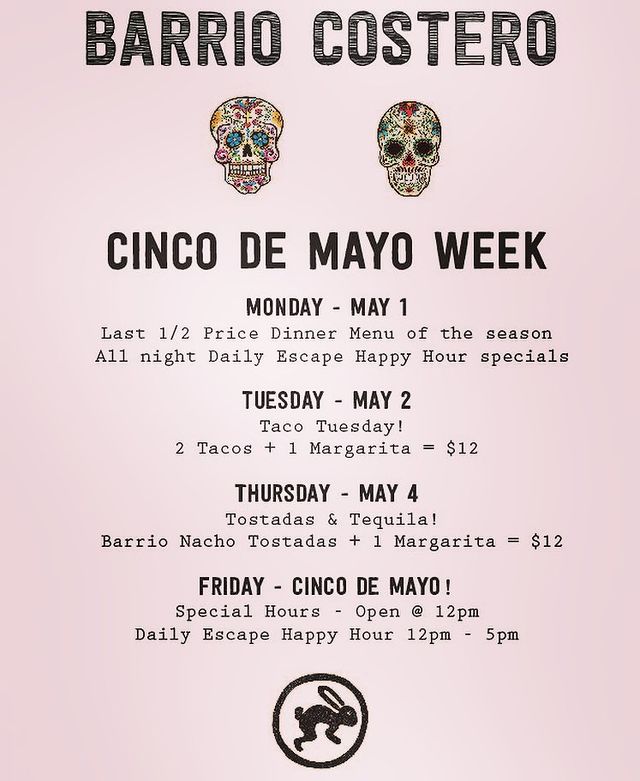 Next week is gonna be a good one! #cincodemayo #chasetherabbit #onlyonbangs...

@seal This one’s for you…
https://instagram.com/p/BUCv0XlFRFo/

But, pulled pork as al Pastor? Just call it what it is “Pernil”

Planning to go to this place this weekend… any recommended dishes from the current menu ?

The octopus and the tilefish tacos for sure! Interesting cocktails, too…I can’t remember the name but I loved the one that has tamarind in it.

We had a good meal.

Everything was good. The octupus and the short rib were the stand out dishes for me.

They have a very good selection a drinks. I liked their version of old fashioned. And the others in the party all enjoyed their cocktails.

It’s an enjoyable place to eat especially if you have a few friends or family that like to share food.