Sui Heng has been serving "khao man gai’ (Hainanese chicken rice) in Bangkok for nearly 70 years. The little shophouse at Yannawa has been hosting generations of local Bangkokians who yearned for their rich rendition of the much-loved chicken rice dish. 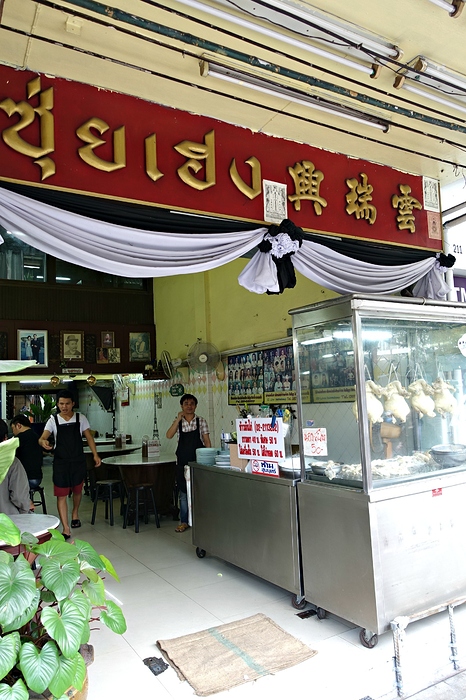 Sui Heng is now run by the third-generation of the family which started the eatery along Charoen Krung Rd in Yannawa. 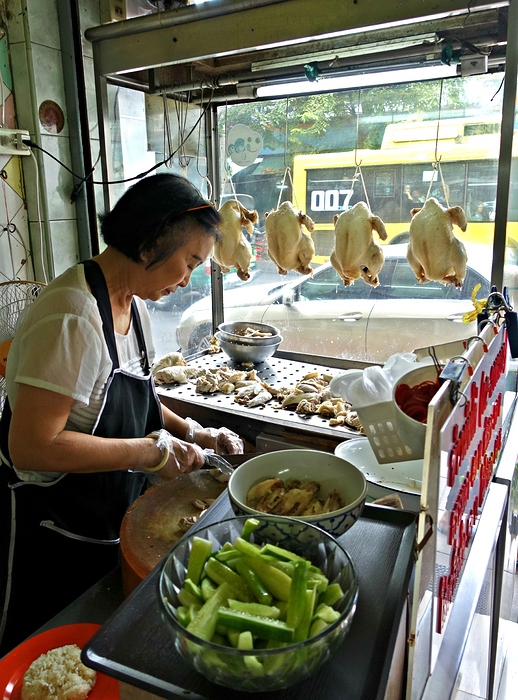 The Hainanese-style of preparing and serving poached chicken here is very similar to those at Hainanese places in Singapore (Tian Tian, Boon Tong Kee, etc.) and Malaysia (KL’s Loke Yun, Ipoh’s Lou Wong or Cowan Street) - chicken are lightly poached till just cooked, then dunked in cold water to stop the cooking process and to ensure smooth skin. Chicken is served at room temperature, with warm rice which has been cooked in chicken-scallion-ginger stock, with added chicken grease during cooking for flavour, and perfumed with pandanus leaves. 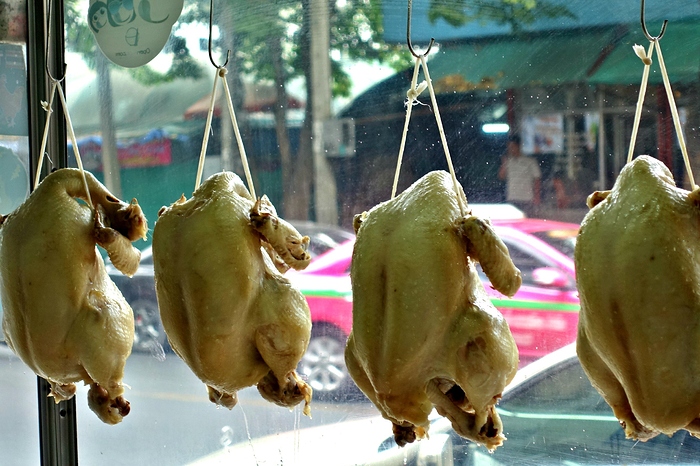 In Singapore and Malaysia, the chicken rice will be served with dark & light soysauce dips, and a spicy chilli-ginger sauce. In Thailand, a chilli-spiked bean-sauce dip is served instead, a nod to the large Taechiu (Chaozhou) segment of the Thai-Chinese populace. Other accompaniments are sticks of freshly-cut cucumber and a light chicken soup. 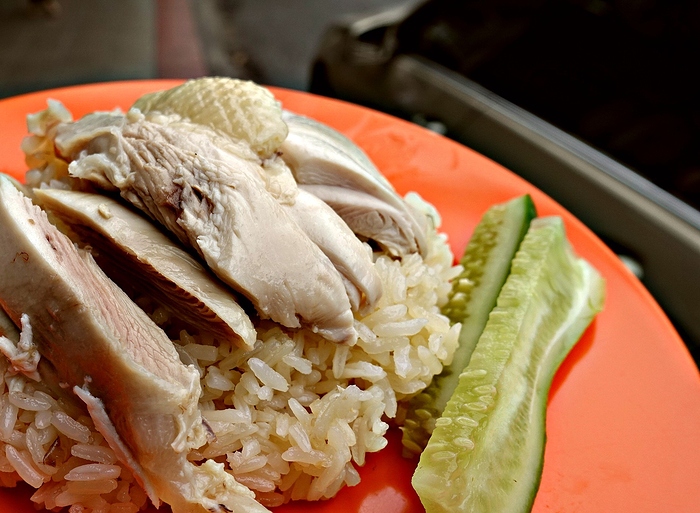 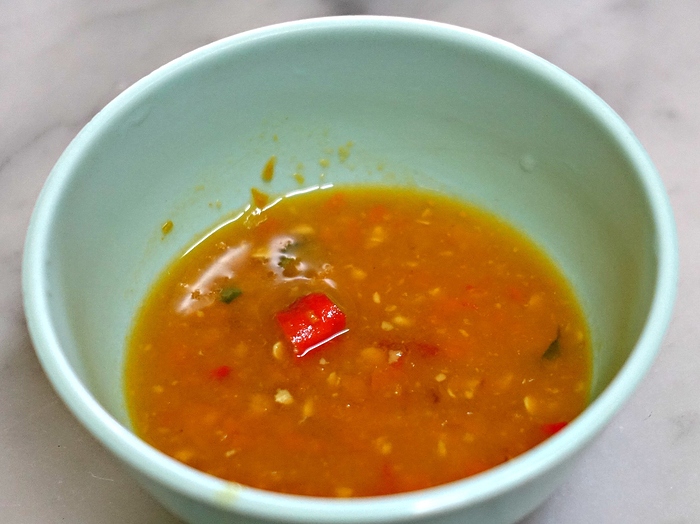 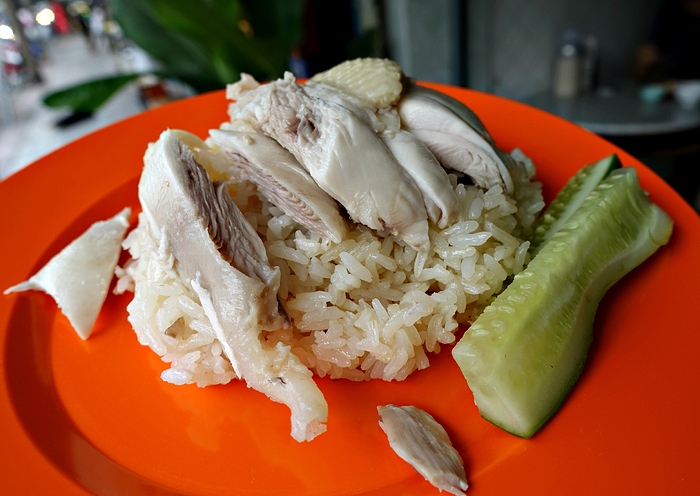 Peter, thanks for the recommendation! I visited this place yesterday and it was very good! I ordered the Hainanese chicken and the Super Soup with breast and wing. The rice was tasty and the chicken was really flavorful. But this main hit for me was the Super Soup! It was full of cabbage and carrot and chunks of chicken and was spiced just hot enough to make my forehead sweat. I ended up dunking the Hainan chicken in it for extra flavor, then poured all the rice and cucumbers in as well. Delicious! The flavors were layered, there was just a lot of flavor in every spoonful.
I originally ordered the soup with chicken leg but the young lady called out to the owner to explain to me that legs come with chicken feet and I was, “Yeah, I will take the wing and breast instead!” LOL! I can eat chicken and duck feet but I would just as soon not.
Great cafe, good people, I will definitely go back next time I am in Bangkok!

ZivBnd, I’m glad you enjoyed it there. I’ve always relished my visits to Bangkok (my maternal grandparents are Thai-Teochew Chinese from there, before they moved to Singapore).

I covered Sui Heng @ Yanawa as I wanted to visit most of Bangkok’s old eating places in the past year or so as part of my nostalgic food trip down places I know from childhood. So, besides 70-year-old Sui Heng, I’d also done:

Try some of these places if you have the time/opportunity.

Prachak is next on my list. I want to try a quarter duck with the egg noodle and 100 g. of the red pork. Though I have to admit the shrimp wonton looks really good too.
And the owner of Sui Heng was very welcoming. Really a good guy! I have found that when you really like their food, it makes the owner/chef think more positively of you!

I am off to Chiang Mai on the night train tomorrow, so it will be a different city to search for good food!

Prachak is next on my list. I want to try a quarter duck with the egg noodle and 100 g. of the red pork.

Chiang Mai is a very tourist-friendly city, and the eating & drinking scene is pretty exciting. My personal fave dining spot is Nasi Jumpru, located a short distance outside the city:

Set within an emerald-green paddy field, a short 25-minute car ride out of Chiang Mai, Nasi Jumpru’s modern-Thai cuisine proved to be light, tasty and amazingly addictive. The beautifully setting was a definite plus, away from hustle and bustle of downtown Chiang Mai. The entrance was marked by a train of colourful Balinese-style flags. [image] [image] [image] [image] [image] [image] Interesting selection of modern takes in Northern Thai staples. Deep-fried lychees stuffed with m…

Another place recommended to me in Chiang Mai was Saiyut’s Kitchen. More expensive than the usual Chiang Mai prices.

My understanding of Royal Thai cuisine are that they’re favourite dishes which were being served to the Rama kings of the current Chakri dynasty. The term was first used by Bussaracum restaurant as their main chef had worked in the royal palaces previously, and the dishes served to the royal household - with a pronounced refinement in their preparation and presentation (e.g. small, very intricate vegetable/fruit carvings) were reproduced for a paying clientele outside, albeit at high prices. B…

But the one place I’d highly recommend and which you should not miss is Khao Soi Samerjai. Its rendition of the Northern curried noodle is stupendous!

There are good khao soi and there are really excellent khao soi, the famed curry noodles from Northern Thailand, with its distinctive Burmese-influenced curry scent and flavours, and the use of two types of noodles: yellow wheat noodles and a crispy version of the said noodles piled on top of the dish, to be stirred in before eating for an additional textural dimension. The khao soi capital of the world has to be Chiang Mai, Thailand’s 2nd-largest city after Bangkok, a Northern metropolis with …