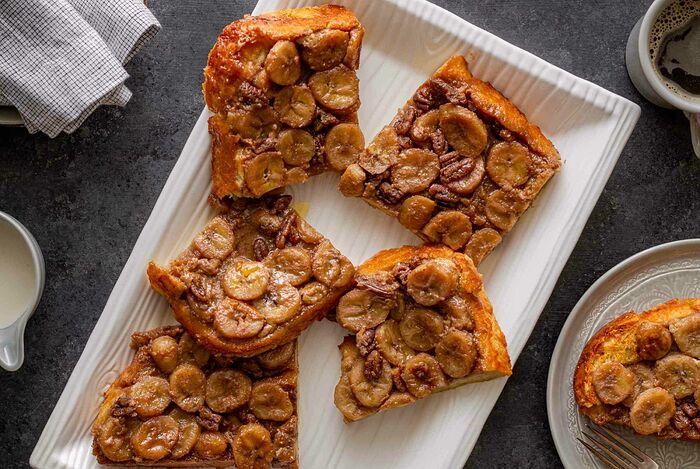 The New Orleans star dessert gets the breakfast treatment, to the delight of early risers and brunch lovers alike! Foster French Toast may not be flambéed, but it certainly fires up your tastebuds! The custard is rich and buttery with plenty of sweet...

Good thing I will eat whatever sounds good at anytime of day!

I feel like most mainstream traditional French Toast in the U.S. nowadays is basically dessert masquerading as “breakfast”.

Some of those stuffed French toasts go overboard on sweetness, especially if they use cake, Danish, or doughnuts rather than plain bread. Using banana slices between two slices of bread isn’t too desserty, but “Fostering” the prep does make it more like upside-down cake. Leftovers can be dessert. Rationalization: no worse than having coffee and a donut or Danish for breakfast, which is typical for busy urban dwellers.

I had it at Brennan’s after my fried oyster breakfast. They used to hand out a photocopy of the Bananas Foster recipe.

I’ve been enjoying the pancake version of BF for many years.

I haven’t tried Brennan’s French toast BF, but I’ve had it made tableside at Commander’s Palace, also Brennan-owned.

When I make BF, I like to add toasted coconut.

My fav French Toast breakfast (more like a brunch) is a Monte Cristo. Haven’t had one in a long time so I guess it is time to put one together.

Anybody here have a great method?

BF would work for me, if in an indulgent mood - also pecan pie French Toast. Sort of related re: indulgence, on one Charleston SC trip, we stayed at a place with a wonderful buffet breakfast, everything was just so, in the best possible way. H had caramel brioche everyday, which looked to die for. I was uncharacteristically restrained, eating only yogurt, berries and maybe a hard boiled egg. I didn’t even taste the caramel brioche, but was assured it was as fabulous as it looked. I regret it to this day!!

I had flamed tableside BF at Brennan’s, in Houston, some 40 years ago. I’ve made it at home, sometimes with apples or nectarines and rum instead of banana and banana liqueur.

I made a Bananas Foster Cream Pie for a party once, which turned out well.

In this vein just put sliced banana right in the griddle and let 'em get carmalized and then pour the pancake batter on top and around it. Flip. Eat.

An ez method is with French toast slices made into a sandwich in a waffle iron.

This sounds delicious!
I’m also a big fan of compote or cooked fruits served with pancakes or waffles for breakfast so this is right up my alley.

You know, I made BF many times before I ever had it in a restaurant. I can’t say any I’ve been served in restaurants is any better than I’ve made, or at least noticeably so.