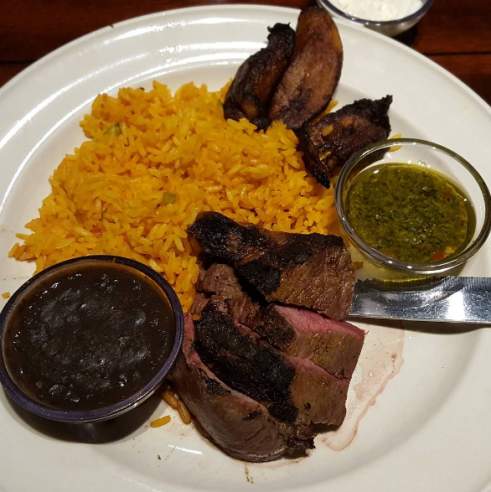 Bahama Breeze is not just one of my favorite chain restaurants, it’s one of my favorite places to eat. Period. I never write about major chains here on Eating New Jersey. That’s Hunter’s job. But for nearly two years since I first started eating there, I’ve been hard-pressed to find something wrong with it. Everything from the service and atmosphere to the food and drinks has been nothing but pure excellence. The workers are warm and friendly. The drinks are not overpriced spiked fruit juices. The food is colorful, fresh, and flavorful. If I had to make a comparison, I’d say Bahama Breeze is simply the antithesis of Applebee’s.

I don’t think I’ve had anything close to a bad meal or cocktail here. The menu encompasses Caribbean favorites along with some Asian and barbecue influences. Most recently, I had the fish tacos. They were grilled (most restaurants fry pieces of God-knows-what). Cooked to perfection with no hint of fishiness at all, the pieces crumbled with every bite. To contrast the soft nature of the fish was a crunchy slaw on the bottom and a fresh salsa on top. It came with a side of rice and beans, which hit the spot. Wash all that down with a margarita or pint of their own Aruba Red or Blonde beer, and you have yourself a fantastic (and light) meal. 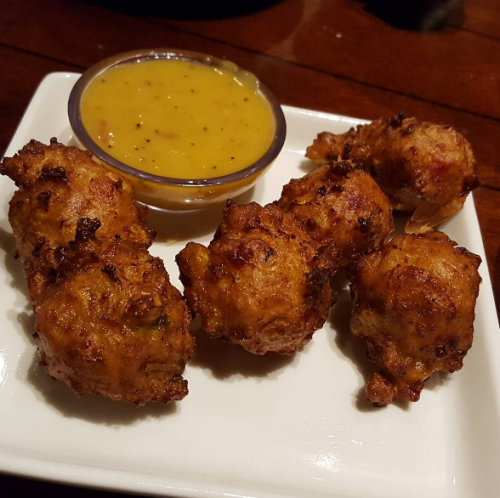 In getting to the appetizers, they are top-notch. The guacamole is as good as you would find in any Mexican restaurant. The Conch fritters are fried to a crisp, not greasy in any way, and come with a marvelous dipping sauce. The same can be said for the empanadas, which are delicately spicy with just the right amount of kick for such an appetizer. Even the shrimp and lobster quesadillas were outstanding—just the right amount of cheese and contents. 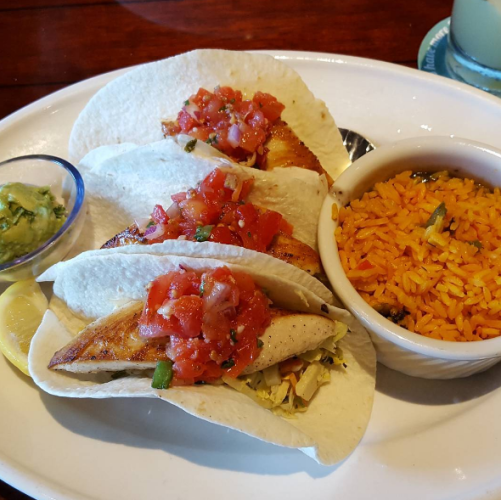 But how about when it comes to something more difficult? One night I dared to order the Steak Churrasco. Only $17.99 for an eight ounce steak and three sides? It must be too good to be true, right? Throw into the mix that I ordered it rare, and we had the makings of a potential disaster. Well, not only did they prove me totally wrong, but they also hit me upside the head with just how good the cooking is at this place. I always order steak rare, but over the years have found some restaurants either will not cook it rare or do not know how to. The server always jots it down, but then it comes out medium or worse. Bahama Breeze, on this night, managed to give me exactly what a rare steak should be. Perfection was not even the word. It was red in the middle, some blood in the plate. There are some steakhouses which could not have done it better. It is pictured below, zoomed in so you can see. 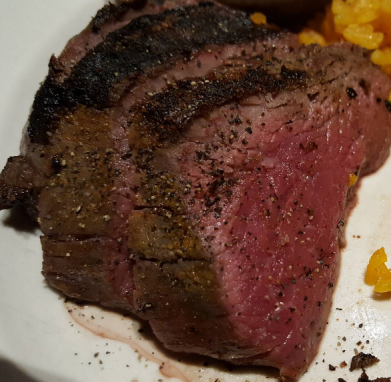 I’ve never tried this spot. Those fritters look good! Do you ever get down to the keys? For some reason the fritters taste better down there lol. I guess it’s a mental thing…maybe.

I have been there but only for cocktails, not sure I would ever thing to eat there. Guess you can’t judge a book by it’s cover, glad you enjoy.

Hit them up for half priced drinks and apps, every night after 10 PM.

every night after 10 PM

We just went today and had the Goat Curry and the Jamaican Stuffed Plantain Bowl. Both were excellent: The goat was not gristly (as it often is elsewhere) and the curry was not toned down for American tastes. The Stuffed Plantain was new to me, but quite tasty. And the place was mercifully quieter than the nearby Jose Tejas, which also had a half-hour wait, which was why we came in the first place–but we’ll probably be back here as a first choice.

Is it possible that you are blessed with an outstanding store that just might outstrip other Bahama Breeze restaurants elsewhere?

I pose that because national chains in my neck of the woods are wildly inconsistent in delivering the chain “experience” store by store.

I ended up here not too long ago after an aborted attempt to eat at the newly opened Dave & Busters. Unfortunately D & B seemed to have abandoned their “Chuck E Cheese for adults” concept and with scores of kids running around it was indistinguishable from Chuck E Cheese. The key is that this will always be a place I “end up” at and not “go to.”

aborted attempt to eat at the newly opened Dave & Busters

You were lucky, the food is terrible and the drinks just okay. We went on a gift card and will never return.

I asked a young lady if they had pinball machines and she said what’s pinball and wasn’t kidding. She’d never heard of it.

Have you tried their sister chain, Seasons 52? I went with a group recently to the Edison location and everyone’s opinion was favorable.

Dave and Buster’s food is disgusting. It used to be an “adult” arcade but now everyone brings their kids so its essentially a Chuck E. Cheese with alcohol as @ebchower said. If I was a football fan I suppose their bar would be a cool place to watch a game, but I’m not.

If I’m going to waste my money, its going to be at a casino not an arcade!