A concept rendering of what a finished Atlantic House will look like.

The Atlantic House, on First Avenue in Atlantic Highlands, has steadily been making renovations and additions to the location they purchased last year. The building is over a hundred years old and was occupied by the popular Memphis Pig Out for the last three decades. While there is no opening date set, today they did announce their executive chef. Brendan Neville, formerly of New York City’s Cooper’s Craft and Kitchen will be coming to the new restaurant which is owned by Richard Crocker, a partner of Asbury Park’s Festhalle and Biergarten.

Chef Neville hails from Warwick, New York, in the Hudson Valley. Atlantic House noted on their Facebook that his upbringing in an area replete with bountiful produce and farmer’s markets helped inspire him to seek a career in culinary arts. He attended Johnson and Wales University, and has been working in restaurants since starting as a dishwasher at age 14. His resume includes time at Bite Cafe in Chicago and Mulberry and Vine in New York City, in addition to Cooper’s. We wish him the best of luck at his new post! 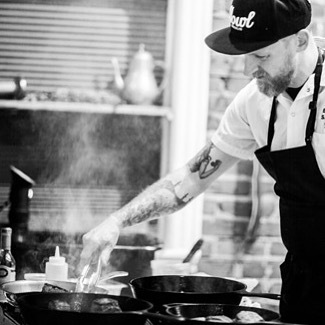 The building they are renovating is a historic one. It was once used as a speakeasy in a town that you could say served as the capital of rum-running and bootlegging on the eastern seaboard during Prohibition. Legend (or maybe more fact than legend) has it that one of many tunnels in the town for running booze had its entrance in the basement of this building. It is associated with mobster (and Godfather basis) Vito Genovese. Several employees of the Atlantic House have already toured the town’s historical society headquarters, the Strauss Mansion Museum, where I have volunteered since 2013. They have expressed interest in incorporating local history into the restaurant’s decor. We are hoping that a menu and opening day will be coming soon.

The Atlantic House is located on 67 First Avenue in Atlantic Highlands, and will feature open-air rooftop dining, a new component of the old structure.

I hope this place is decent. I have a feeling it is going to be like gaslight. That place is good but just expensive. If I have a meal, an app, and 3 beers I’m looking at 80 or so for pub food…not cheap.

So this place is apparently open now and the menu is limited https://www.theatlantichousenj.com/menu

I’ve heard some good things as this joint is near my house. I am hoping a limited menu means they are focused on making those dishes top notch. The dry aged burger is calling my name.

Anyone been more recently? Going to end up here for dinner tonight and I don’t know anything about the place.

Since there was no help from the board, I bravely soldiered on and ordered dinner!

I tried the lobster roll, fresh pea salad, bucket of clams appy, and the burger, not to mention lots and lots of freshly cut fries and it was all good. One of our party got the fish and chips and wasn’t thrilled with the fish, but that was the only complaint about the food.

True, there was a crappy waiter who didn’t put my burger in with the rest of our food and then lied about it to me ( it’ll be out in a minute - more like ten. ) By the time my burger arrived I really wanted to hate it, but it was good. And lots more of those crispy fries didn’t hurt either.

After we finished we walked across the street and got some ice cream at Nicholas Creamery.

This street just keeps getting better!

glad it was better than expected! Of course some of us need to know what flavor you had at NC…

Lol! We had a blueberry and an orange crush.

I had the blueberry last week and while it looked gorgeous, it didn’t have a ton of blueberry flavor. That said, I still ate it…

What knocked me out was the lemon pie! Chunks of crust in a very lemony base. Hoping the blueberry gets more flavorful over the next couple of weeks as the bloobs max out in NJ.

Went here on a spur of the moment trip after sea bright was packed beyond belief. Have to say, food was damned good. Burger was very good, fries terrific. Wife had fish tacos and they got high marks. Kids chicken fingers were praised as well. Only issue was they gave us literally 0 sauces or ketchup with the order. I prob should have asked tbh, but take out may not be big for them given the awesome looking deck space they have. Place was pretty much full with long waits by 630 last
Night so they seem to be doing well, mix of families, p pile on dates, and some seniors so nice blend of all types. Def a spot I will be back to. Hoping to hit up that roof deck for a sunset.
Finished with ice cream and froyo at crazees.