Local Barbecue fans may have fond memories of APL BBQ. Its unofficial debut happened years ago, when TV late night talk show host Jimmy Kimmel invited his friend, Chef Adam Perry Lang, to have a BBQ cookout on the set of his show, Jimmy Kimmel Live! in Hollywood. I remember trying Chef Lang’s BBQ (especially the Beef Rib) at that pop-up and being thoroughly impressed. It was better than any of the local BBQ offerings we had back then.

When Chef Lang returned to L.A. to open a permanent restaurant - APL Steakhouse - it originally was, per the name, an American Steakhouse featuring no BBQ at all (he later added it to the lunch menu to drum up business). But it was inconsistent, and then the restaurant closed during the pandemic. So imagine my surprise when APL BBQ returned to So Cal, this time in the form of a pop-up / residency at a former Taco restaurant. 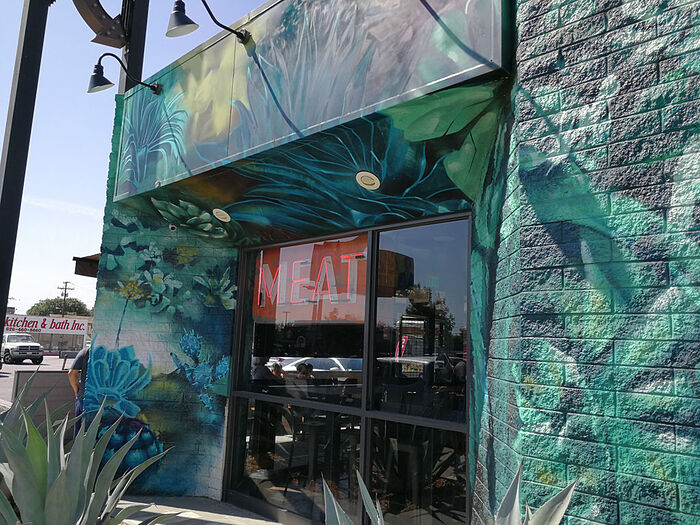 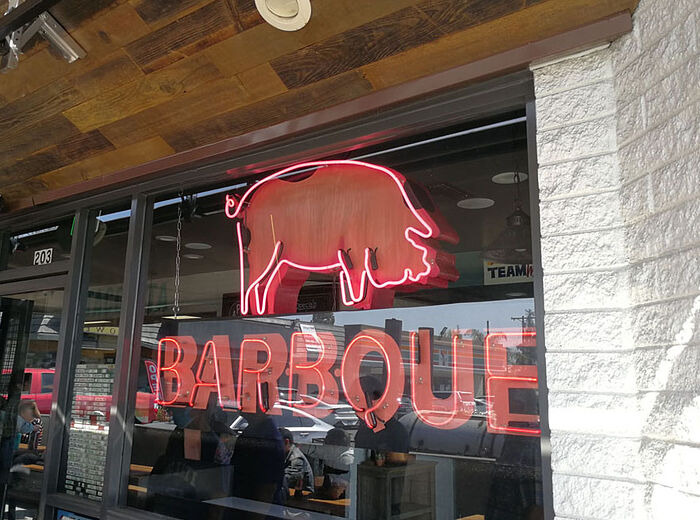 Since this is only a Pop-Up for now, there is no official signage. But you can follow the neon signs for “Meat” and “BarBQue” and you’ll be in the right place. 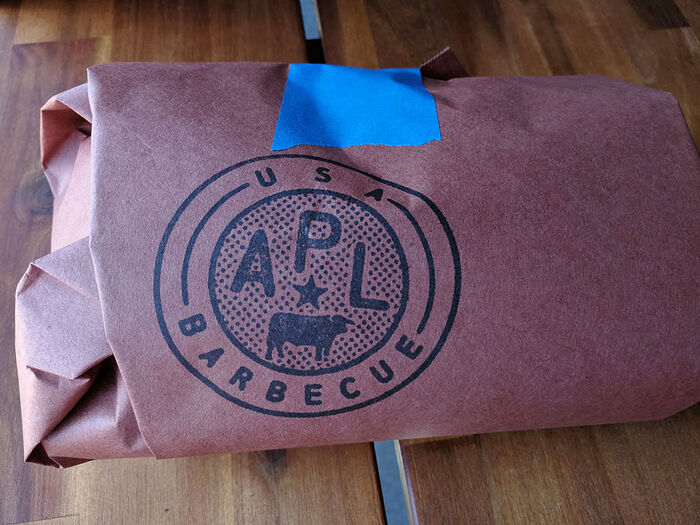 Walking into the small restaurant, there is no indoor seating, with just a few tables outside. Chef Adam Perry Lang was there greeting every guest. He confirmed he was making the BBQ these days, and he had just a couple of helpers for packaging up each order as it came in, while he personally sliced and prepared the meat for every order. 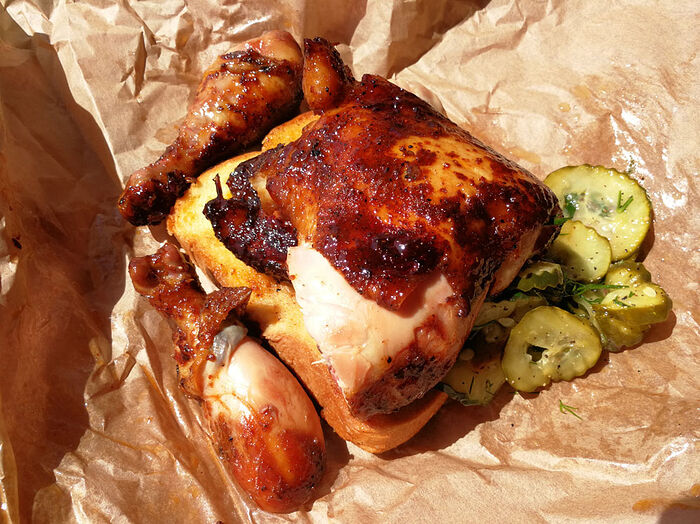 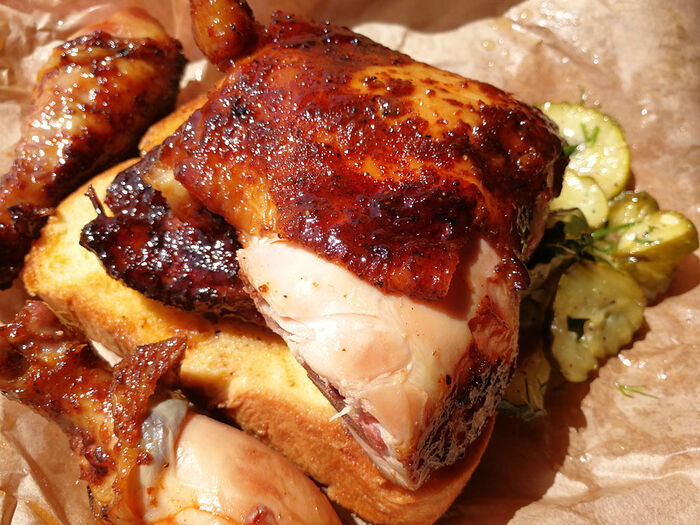 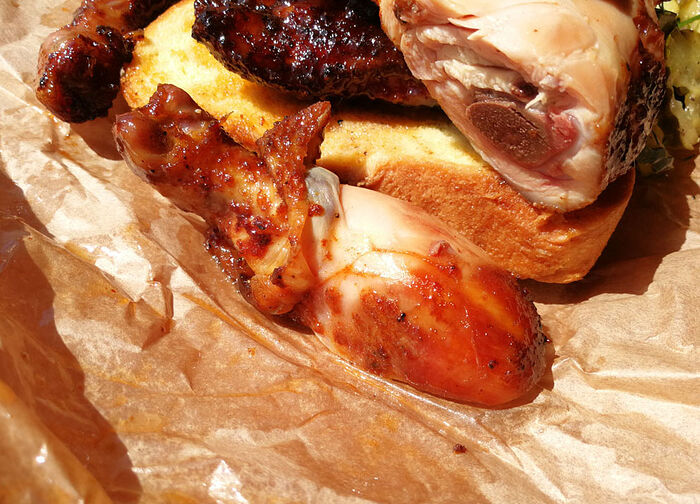 BBQ Chicken at most places we’ve tried over the years feels like an afterthought most of the time. The Chicken at many restaurants has generally been on the average side, usually overcooked / dried out, etc. Thankfully at APL BBQ Pop-Up, the Honey Glazed Chicken was moist and juicy.

Unfortunately that was the highlight for the Chicken. Chef Lang said they use Apple Wood to smoke the Chicken, but there was very little smokiness. The skin was flabby, the Honey Glazed BBQ Sauce (already slathered on top) was sweet and tangy. Overall this was a good example of a decent “BBQ Chicken” and we appreciated that it was so juicy. 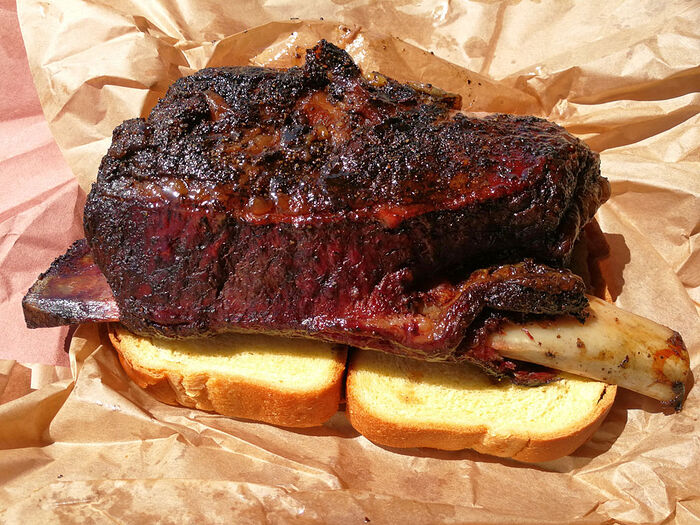 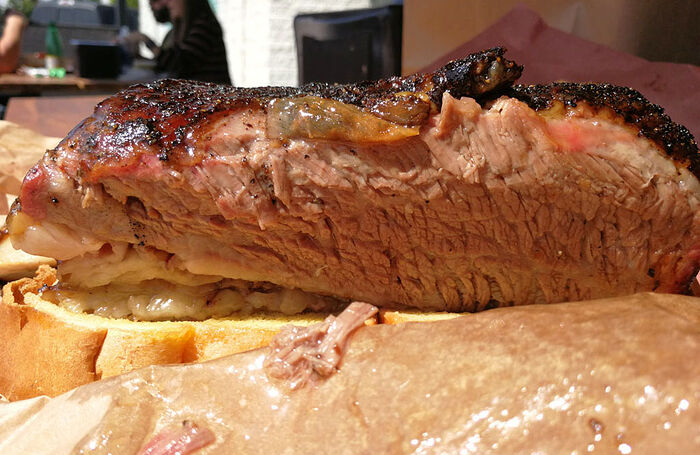 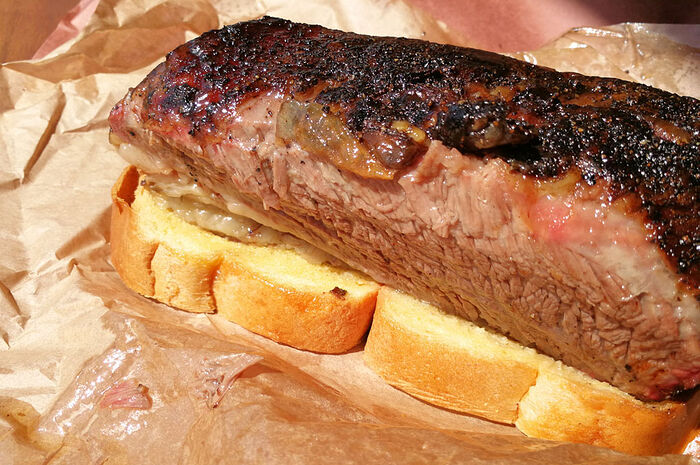 The BBQ item we were looking forward to the most: I still remembered how delicious Chef Lang’s Beef Rib was back at Jimmy Kimmel Live!'s Pop-Up years ago. This version offered today uses Pecan Wood to smoke the Beef Short Rib.

Taking a bite: It was tender, fatty, and moist, with zero smokiness(!).

Clearly the exterior bark seemed like it was smoked for awhile, but there was no smokiness in the Beef Rib meat itself. And it was severely underseasoned. As in, some bites tasted like there was No Salt added(!). (Note: Folks know that I actually prefer my dishes on the lighter side, and appreciate when things aren’t overly salted. So for this to be underseasoned for me, means it’s really lacking any Salt for the average eater.) We split this order with a friend of ours, who also said the same thing: “Does it seem like there’s no flavor?”

The Beef Short Rib itself tasted like a quality cut, and it was moist and tender, but the lack of smokiness, and lack of seasoning was baffling. And to make matters worse, you have to commit to buying an entire Beef Rib at $75 per Rib(!), so it’s not a small purchase. 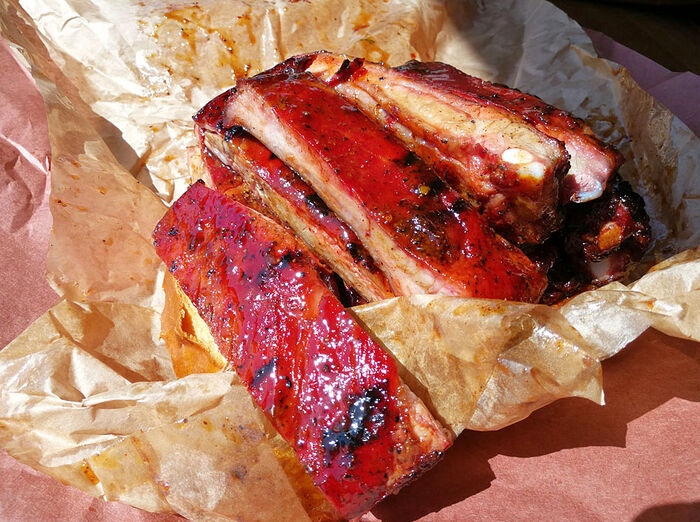 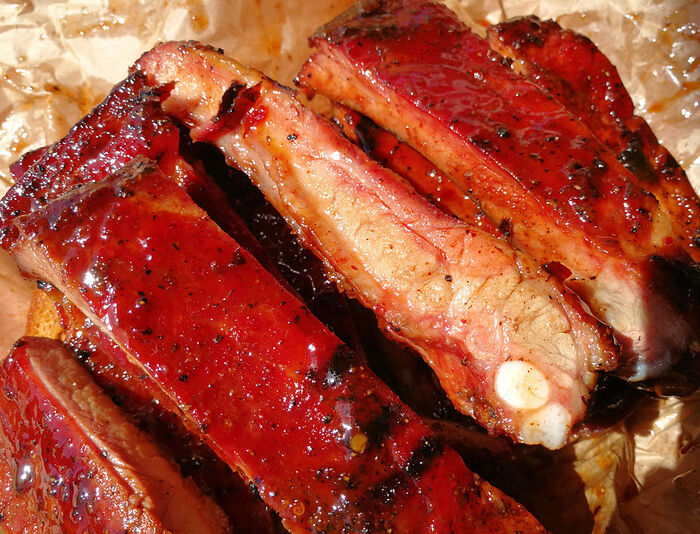 It’s interesting to note that the menu specifically said the St. Louis Cut Spare Ribs were “Cherry Wood Finished”, so did that mean they weren’t fully smoked with Cherry Wood? The Pork Spare Ribs were average at best. It was already slathered with their APL BBQ Sauce, so there’s no option of getting it without the sauce to really dig into the flavors of the meat.

The Spare Ribs, like the previous 2 offerings, had no smokiness. These were meaty and had a noticeable chew (perhaps more competition style, rather than fall-off-the-bone). They were fine, but a bit dried out and salty as well.

These were a far cry from the stunning greatness that was Heritage BBQ’s amazing Smoked Pork Spare Ribs.

Similar to the Beef Rib, and probably to guarantee enough sell-through, APL BBQ requires you to commit to buying a Full Rack of the Pork Ribs, which runs you $45 per order.

Ultimately, the new APL BBQ Pop-Up feels rushed and unfinished. What’s distressing is that Chef Adam Perry Lang said he’s personally making the BBQ this time (as opposed to during APL Steakhouse’s Lunch BBQ which was left to the hands of his assistants and was worse for it). The best item we had was the Honey Glazed Chicken, which was sufficiently moist and juicy, with a Honey BBQ Sauce finish. But there was no smokiness.

The Beef Short Rib (previously Chef Lang’s star at his OG pop-up) was a big disappointment, as were the St. Louis Cut Spare Ribs. The toughest part is that they are charging full, premium prices (similar or more than the top BBQ places), and the flavor and execution fall way short. When you spend ~$175 for BBQ and not a single item shines, that is a problem. Looking at it from the other side, it most certainly is the best BBQ in the area he’s popping up in (Pasadena / Rosemead), but that’s not saying much. Here’s to hoping this was just “new restaurant jitters” and he can straighten it out. But in the end, we’d much rather drive to Heritage BBQ to enjoy consistent greatness.

Be sure to check his Instagram for the latest news and any change of locations. He’s confirmed he’ll still continue to be there for the next 2 weeks. 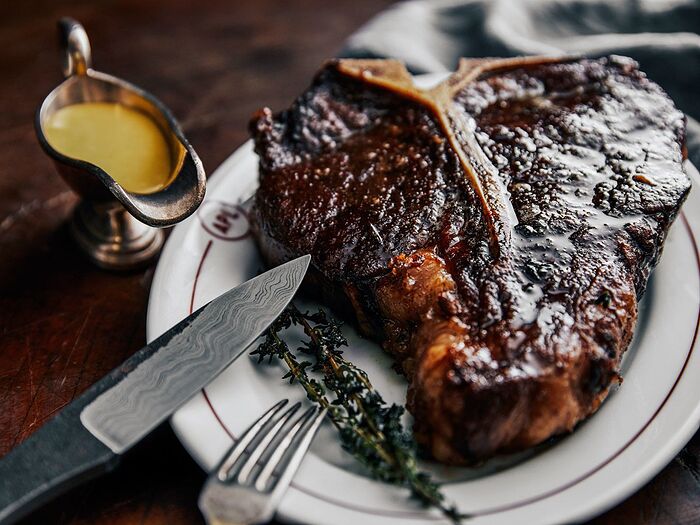 APL Restaurant elevates the contemporary steakhouse with inspiration from those of the late 1800’s and early 1900’s. The 143-seat neighborhood restaurant is situated on the ground floor of L.A.’s first-ever high-rise, the historic Taft Building,...

Curious, did you like APL initially? I was not that smitten by it, but then I don’t fancy myself a connoisseur of American BBQ.

Did you mean “APL Steakhouse” (Chef Lang’s initial restaurant debut)? Or “APL BBQ” when it was added later as the Lunch option for APL Steakhouse? (Or did you mean APL’s OG debut at Jimmy Kimmel Live!'s TV Set as a pop-up years ago?)

I enjoyed the Jimmy Kimmel Live! Pop-Up years ago, for the Beef Rib. APL Steakhouse… not a fan. It was not very good, and other steakhouses, especially CUT blew it away.

APL BBQ as Lunch within APL Steakhouse? Yah it was too inconsistent and not that good.

We went during the Grand Opening week for that Lunch option, and Chef Lang was there, and he said he was up since the early hours making the BBQ, and it tasted pretty good (some items). Then we went back 1 week later, and Chef Lang already handed it off to his assistants(!) (so soon), and the BBQ was noticeably worse. I tried it one last time after that, like a few months later I think, and it was still meh. Just disappointing.

Have you made it out to Heritage BBQ yet?

Worth trying once at least.

@Chowseeker1999 Thanks for the heads up, saved me a trip. The beef rib is virtually devoid of a smoke ring.

I was going to check it out but will pass. Such a shame. 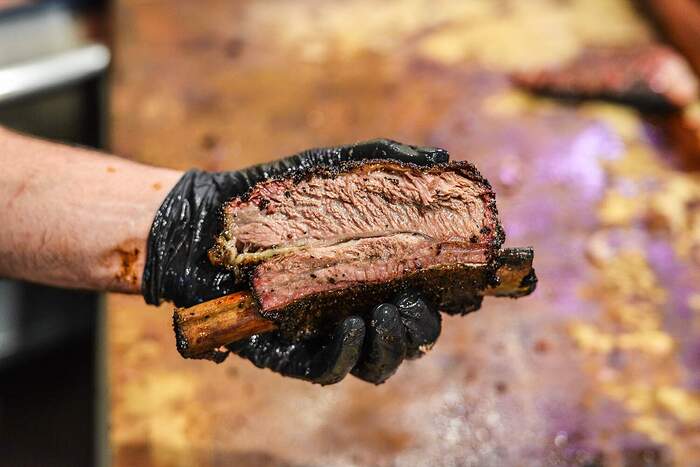 Thanks, I just wanted to report on our meal; hopefully it saves people some money / time. I do hope they improve, but after spending ~$175 on that BBQ meal, it felt like it wasn’t worth the money. Thanks for the pic of Franklin’s.

Yikes! Thank for taking one for the team…