Apios americana, or American Groundnut, is an ancient edible bean/Pea relative native to North America. It was an important food for the Native Americans, who taught early settlers about it. There are many historical accounts about this fairly common plant, which grows primarily in the eastern states.

While some sources say the bean is edible, there’s hardly anything there. The real food value is the roots, which form beadlike swellings, tubers, along typically rambling stolons. 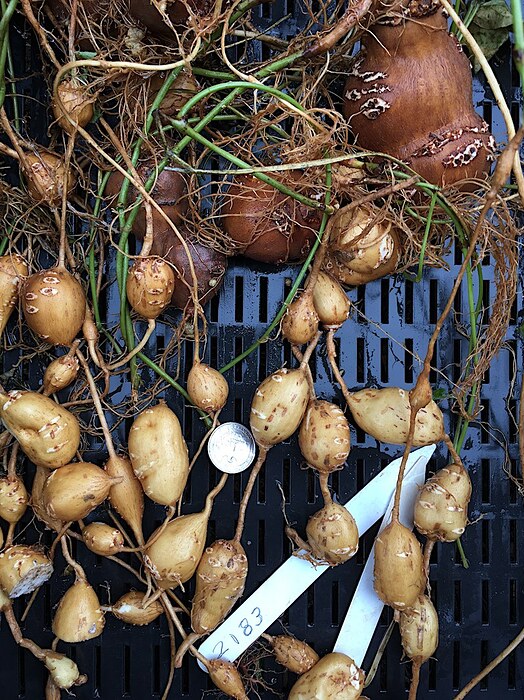 This picture is of an improved variety, developed by Dr. William, Bill Blackmon and colleagues at Louisiana State University. I’ve had the pleasure of working with Bill and he has generously donated stock which I’m growing and experimenting with. Ken Asmus, of Oikos Tree Crops, also works with Apios. In addition to cultural experiments, I’m working on recipes and food preservation methods for this worthy plant. As time permits, more information will be added.

For now, as Dr. Blackmon suggests, we should call this emerging vegetable “Apios”, so it does not get confused with other “groundnuts”. Apios is a perennial vine, with compound, pointed leaves. 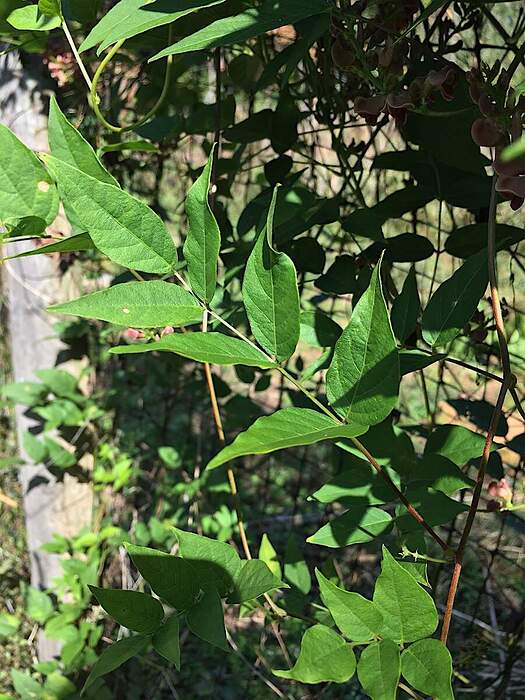 Later in the season, interesting flower spikes emerge, showing the relationship to other legumes. 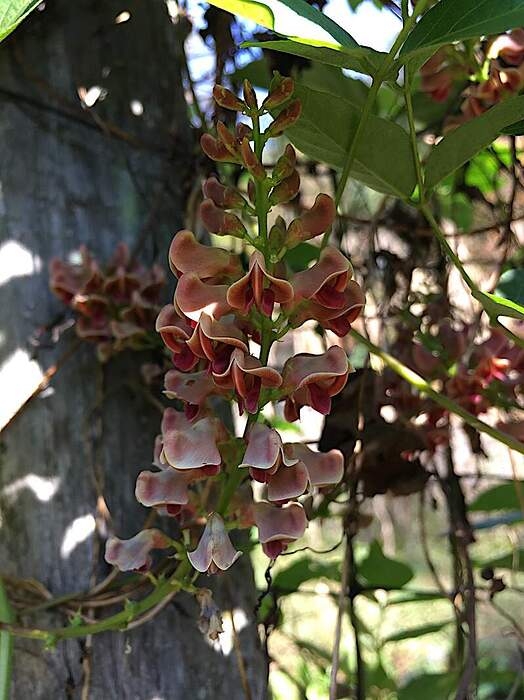 I have not finished harvesting this past season’s Apios tubers, which can survive in the ground for some years, even in cold climates. Voles, tunneling rodents, love Apios, so getting them in a protected fridge is on the to-do list.

Recipes, the ins and outs of Apios growing will hopefully expand here, as foul weather encourages a cozier spot by the keyboard!

Super interesting. I had not heard of this plant before your post.

The flavor and texture of cooked Apios is not like a potato, and many folks get disappointed that it’s not a stand in for potatoes. Apios tubers have a much higher protein content (about threefold), and a flavor which, to me, is more reminiscent of Black-eyed Peas.

One can make delicious, crispy-fried chips from thinly-sliced tubers. I shredded some Apios tubers and formed patties, rather like latkes. No egg was added, yet they held together just fine. The flavor was excellent and they stayed crunchy on the outside, soft on the inside.

I mashed boiled Apios with Maple Syrup and a bit of butter and then gently fried it to create a dish which was remarkably like peanut brittle. Very little is published as far as recipes, so I’m working on some.

Boiled, they can get gummy, which is more pronounced as they cool off. This thickening is quite handy when making a bisque or thick stew. I always peel mine, which is where the domesticated types come in. It’s far easier to peel larger tubers. The tubers exude a sticky white sap, so having cold water to rinse it off before it dries is wise. Do not consume Apios tubers raw.

Wild Apios typically make small tubers, dime to quarter sized. Even these may take a couple years to form. The original “mother” tuber continues to gain size, but I’m not sure at what point its culinary value goes downhill. One to two year tubers are fine, but digging quarter-sized tubers in something more suited for wild food foragers, which I’ve done many times.

From 1985–1994 the LSU team, headed by Dr. Wm. Blackmon and Dr. Berthal Reynolds collected, bred and selected for larger tubers and better yields. Apios tubers went from nickel to quarter sized (1 year old) to the size of medium potatoes in a single season. This was a huge leap forward in Apios domestication. While the program has since been dropped by LSU, a group of growers and nurseries maintain much of the LSU strains and Bill Blackmon continued his plant breeding at his property in Virginia. I have recently heard from Bill that he’s decreasing his efforts with Apios, which is a well deserved rest from a remarkable life’s work.

It is hoped that future breeders will shape Apios domestication to solve some issues which make the crop challenging on a large scale. One of the biggest issues is the tubers often stray far from where they were planted. runners can get 3 feet or more from the mother tuber, making harvesting more difficult. One of the goals is to get shorter stolons, so tubers cluster under the original planting. This has been dome with other crops, like Jerusalem Artichoke, Helianthus tuberosus.

I have seed from wild Apios, collected in Virginia, which may hold promise in this direction. When I worked at the Center for Historic Plants, at Monticello, some gardeners came and asked me what the “weed” was which they had been sent to remove from an Azalea planting. When I saw it was Apios smothering the Azaleas, I dug down and found some very large tubers, which I collected. Seeds from the plants was also secured.

What was also interesting: amongst the Apios tubers, there appeared to be quartz shards, from tool or arrowhead making. Had Native Americans planted these, many years ago? Who knows. What is known is that the aboriginals used Apios extensively and traded them as a food article.

The rambling vines produce best if trellised. I’m wondering if they would produce well if planted on the south, sun-facing side of a corn field. It’s also possible that a sturdy variety of corn, such as Hickory King, could be planted a bit farther apart (for increased sun penetration) and used as trellising for the vines.

Here’s another one of Bill Blackmon’s Apios selections, #2127. Aside from good production, the tubers are closer together and the runners not as long as most Apios. 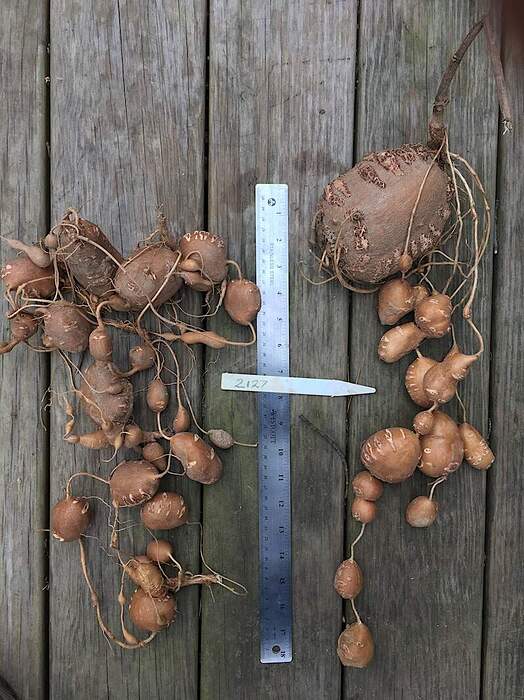 The larger, darker-skinned tubers are the “mother” tubers, which were planted spring2020. Those mother tubers keep growing, but not always equally. The one on the right increased size by around 300% while the one on the left gained about 50%. All the smaller tubers dangling from their mother tubers formed during the 2020 growing season.