Anyone know where to find Chan Chi Kee knives in SF/Bay Area?

I used to have 2 CCK knives bought back in the day from the now long departed Greatmin Trading on Broadway. One was lost (stolen!) in a move, and the other was destroyed when having a dinner party where a friend thought to help out. I walked into the kitchen to the horror of him trying to chop baby back ribs with my vegetable slicer, “what it’s a cleaver, right?”

And now I don’t see them anywhere and mostly ebay online which I’d rather not use.

It is strange too. I see CCK knives sold several location in Toronto, New York City, Los Angles, but have not seen them in Bay Area yet. Good luck.

Tane Chan @ The Wok Shop?
My go to source is Chefknivestogo.com. They’re very prompt in their service.

Unfortunately, Tane Chan at Wok Shop never carries CCK knives. Chefknivestogo is ok. It is just that the QC for CCK knives are not the greatest. The knives work, but something there are black mark on the handles…etc. So it is nice to see one in person. I bet someone soemewhere in Bay Area carries CCK. I just have no luck finding them.

Ya, the Wok Shop never has carried them since as long as I’ve been here. The only place I ever did know that had them (found online from wherever food/knife board I can’t remember years later) was Greatmin.

And yep, I’d much rather buy in person. I’ll look at a few more places but kind of at a loss since everyone I ask doesn’t know and the only reason I ever found them in the first place was randomly seeing a mention online.

Thanks for the info though, I’ll post if I find anything.

My home. Though I am not selling

Kind of update: was walking by Wok Shop and my gf had never been, so we went in. And I saw a CCK wrapper in the knife case! The other lady (not Tane, and I don’t think her daughter but not sure. I’ve ‘talked’ to her before — she’s, ummm, very blunt and short with encounters) helped to show it reluctantly, “everyone asks to see this and no one buys it!” It was a meat cleaver for $130 or so. She told me “don’t buy a Chinese knife for $100” and that CCK had moved production from HK to China (not sure if that’s true?). In any case, seems like she’s shown that to other people before and isn’t about showing it anymore — told us to buy a cheap Chinese knife online instead.

When we were still browsing around and happened to be by a case of Japanese knives she walked by and said, “if you want a $100 knife, buy one of these!”

I had told my gf, “it can get a little crazy in here sometimes” before going in. Upon leaving, “you weren’t lying.” lol

So no closer to finding a CCK veg slicer but if anyone wants a meat cleaver, there’s one at the Wok Shop.

so we went in. And I saw a CCK wrapper in the knife case!

Awesome. It is too bad CCK move production from Hong Kong to China (if it is true, I am not sure). A lot of cookware brand starts to lose quality after that. I suppose it also depends which part of China they are moving too. If it is at Canton area, then I would worry less.

To be honest, I disagree with this lady. If one wants a good Chinese vegetable knife or Chinese slicer, CCK knives are much better than most other Chinese brands. I did a knife comparison article between my CCK and Shi Ba Zhi on Chowhound. They are quiet different. 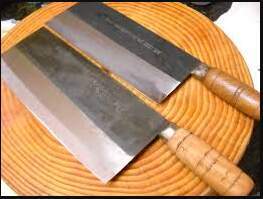 Thanks for updating. Not sure why, but when I was in NYC Manhattan, many places sell CCK, so maybe just a much bigger market for CCK at those Chinese restaurants. I remember seeing them at least 4 stores in Manhattan Chinatown. Needless to say, they are also easy to find in Toronto, Canada.

To be honest, I disagree with this lady. If one wants a good Chinese vegetable knife or Chinese slicer, CCK knives are much better than most other Chinese brands.

Me too, which is why I’m so bummed I can’t find them out here. From what I hear, the ‘standard’ out here is Dexter, which I’ve never owned but seem to be pretty well liked. Do you have any experience with those?

She’s a funny one so don’t know if what she was saying was true or not.

I was actually in NYC a couple weeks ago and thought about it but with travel woes going out there, there was no way I was going to check a bag so couldn’t get one. I guess I will have to live without for now.

Thanks for following along my journey!

Correct. Dexter is a standard here in SF (at least for a long time). I have experience with Dexter. In fact, I bought my first Dexter from Tane. It is the knife she recommends. Do you remember Martin Yang? At one point, I believe he also recommended and advertised for Dexter. I could be wrong. 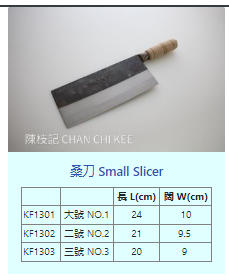 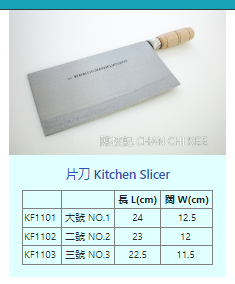 Dexter’s most famous Chinese knife is the S5198. Now, this is closer to what most people consider as vegetable knife or medium blade knife. It is also made of much softer steel. I believe it is HRC 55-56. Because it is thicker and heavier, it has its advantages and disadvantages. The disadvantages are clear. One advantage is that you can use it to smash garlic and ginger by simple motion. 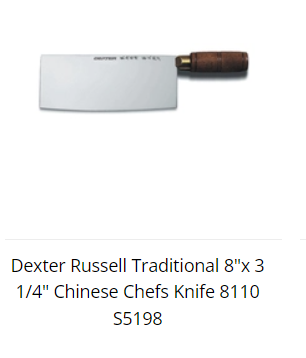 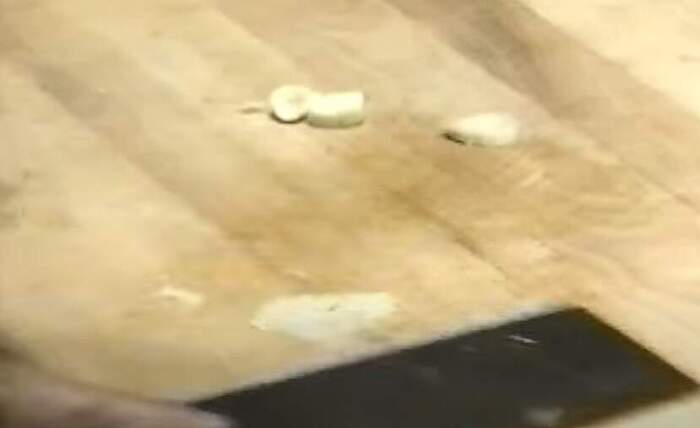 Thanks for the info on the Dexters. I think I’ll just wait it out a bit more to see if anything comes up with a CCK.

And of course I remember Martin Yan! I used to watch him as a little kid, and then he was the speaker at my then gf’s brother’s culinary school graduation. I went and talked to him for a second after. Then when MY China opened, I was at the bar and he was doing his thing roaming around, eventually came our way and I told him how we met at the graduation and of course he said he remembered (I 100% know he didn’t but he’s quite the people person as we all know) and sent out a few dishes. He’s engaging if nothing else.

I agree with you. There is 0.01% chance he really remembers.

In grad school I wrote a paper about TV chefs/shows and covered Martin Yan. Very personable, easy relationship with the camera/audience…and great knife skills. If the show lapsed or dragged, or for transition…he brought out the cleaver skills to move things along. Unique visuals and skilled based. Other chefs showed great knife skills (Jacques) but Martin played it up, make it something more.

There’s been criticism about Martin’s “accent” on his TV show but I figured it was projection for TV/speaking over an audience thing. In person, or not on his show or TV, much more low key. Accent drops quite a bit. As to why there’s criticism of his accent in the first place…another deal.

In any case, Martin does recommend Dexter…because of the curved inner-edge, doesn’t hurt your hand. Here’s a video of him explaining…doing a demo for a hospitality college. (notice accent levels out greatly). At 10:00 he gets into knife skills, explains Dexter knife. Martin is definitely a good showman when it comes to knife skill.
Is the criticism of his accent is new thing? I actually do not remember a lot of criticisms of his accent decades ago. Thanks for the video. Yeah, I remember he also has a partnership various knife makers like Dexter, Messermeister…etc.
This Martin Yan knife is probably a partnership with Dexter. 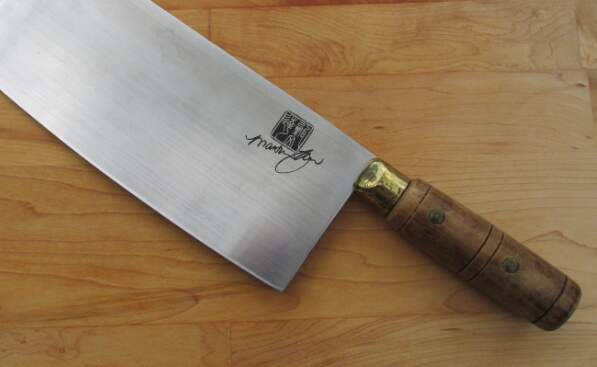 Yeah, if the cleaver has his autograph, he’s a partner.

re: his accent, there was criticism from people who watched his show and said his accent was pumped up or fake. It was odd because both American born Asians saw it and were often offended, but I also remember white people playing into the stereotype of broken English by Asian, in a negative way.

Martin Yan in real life is much more chill, as you can see from the culinary school video, where he’s teaching and not being the showman. I argued it was a projection thing and playing over an audience that amped his voice and changed his delivery.

If you watch video from the old Yan Can Cook, versus the culinary school video, you can see he’s “pumped up” on the show, almost yells…definitely amped up a bit.

Someone was saying he doesn’t have an accent at all and it’s all fake, I was saying how I’ve heard him walking in Chinatown and he sounded like he did on PBS more or less (“but that’s cause he’s playing the role there too!”) to me talking about how he spoke at the graduation (“there too!”) to me saying I’ve talked to him in person with just me, him, and my gf and he sounded the same just not as loud, etc, etc.

All those were dismissed and then I brought up Emeril and how I’ve also met him at his restaurant and elsewhere and somehow he also wasn’t exactly the same as he was on TV (he never said “bam!” once) but that was also dismissed for some reason or other…

Every TV person I’ve ever met in real life wasn’t like they are when on TV*. For whatever reason people on the food boards love to bring up Martin though.

*except Stephen A. That fool is ‘on’ 24/7. He’s insane lol. I don’t know what he eats but if I ever need to swim across the Pacific, I’m asking for that for breakfast.

Speaking to a camera and audience is a lot more difficult than it looks. Of course that’s why there’s professionals. Generally, it’s like “inside voice” vs. “outside voice”, plus pronunciation and being able to look at the camera. It’s not natural.

Looking at the instructional video (above), and Martin is NOT doing it for TV, you can see he’s like 10x lower key than TV but still charming, telling jokes. He’s teaching….way more natural.

In any case, the fact that his accent was scrutinized and European accents are not…well it’s not difficult to figure out the bias and stereotypes. I think the dislike of the stereotype and those w/ bias drove the conversation somehow. No other TV chefs got the same deal.

In any case, the fact that his accent was scrutinized and European accents are not

First, is this scrutinization only in the last 10 years? I feel there have been a lot of older people being draft out of their past history for what they did 30-50 years ago. I think if what you said is true, then the scrutinization is that Martin was faking his accent. Actually, Arnold Schwarzenegger has been scrutinized too. e.g. Arnold was faking his very heavy accent.

I wrote the paper in 1990. Martin was big in the 80s/90s and his accent was scrutinized then. Given the lack of representation of Asian Ams in US TV (better now), I’ll just call it bias/racism and a reaction to it. It’s not like that bias has gone away…just changed or appeared as anti-Asian hate violence and speech since the pandemic. The conversation was driven racism and a reaction to it.

Apologies for getting heavy…but not going to call it anything else.