We’re heading to the Canaries in early November (specifically, Gran Canaria and Fuerteventura). I’ve already consulted with @Harters who is HO’s resident expert on the Canaries, but he visits the island of Tenerife. Spring onion is a big volcano fan and so we basically flipped a coin and decided to try Fuerteventura instead of Tenerife (both are volcanic).

Does anyone have food experiences, good or bad, with these 2 Canary Islands?

@naf Thanks for re-tagging. I still don’t think I’ll get any responses but who knows?

In any case, I will report back.

The stress of US Thanksgiving is winding down, we’re absorbing the violence in London and the Hague. And so I turn to food for comfort.

I already reported on our time in London/Gatwick on the UK board. We spent ~5 days each on Fuerteventura and Gran Canaria.

Fuerteventura: Had more windy than usual weather according to all the locals we chatted with and we’re not wind wimps…for example, we’ve been to Mui Ne in Vietnam and to Gardur in Iceland. We were there for the kite festival which was awesome, but the participants had a tough time making their kites behave. We stayed in a daft Star Wars house right on the beach in El Cotillo (it has been captured in numerous postcards). The kitchen was a bit challenging (not the best tools/knives and one had to stoop a bit to do any prepping, use the sink…and I’m 5’3" (1.6 meters for my European friends) but I love cooking when presented with challenges. Some meals cooked at home (decent pasta with mushrooms, very bad supermarket tomatoes, canned chickpeas, lots of garlic. It’s kind of our default travel meal. Lots of decent cheap red wine throughout. 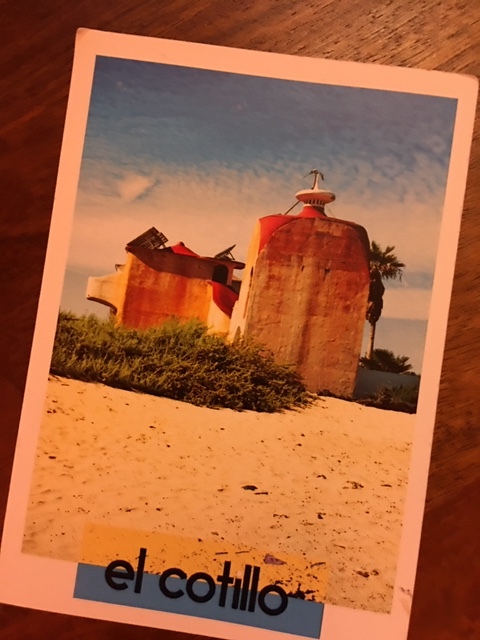 Our first meal out is after the kite festival (which is a lot of fun), in the “metropolis” of Correlejo. We stumble on La Factoria after seeing that Rompeolas is too fancy (we saw afterwards that La Factoria is mentioned in Lonely Planet and that’s not saying much but for once, it’s spot on). In that simple space on the harbor, we had a enjoyable meal of local fresh and “fermented” (aged) goat cheese (not the yucky gluey stuff we’re used to in the US, but more like sheep’s milk manchego-ish), mussels with tangy pickled onions and red pepper, Canarian potatoes with garlicky green sauce, margherita pizza with a more-than-decent crust for spring onion. Everything was very well-prepared. 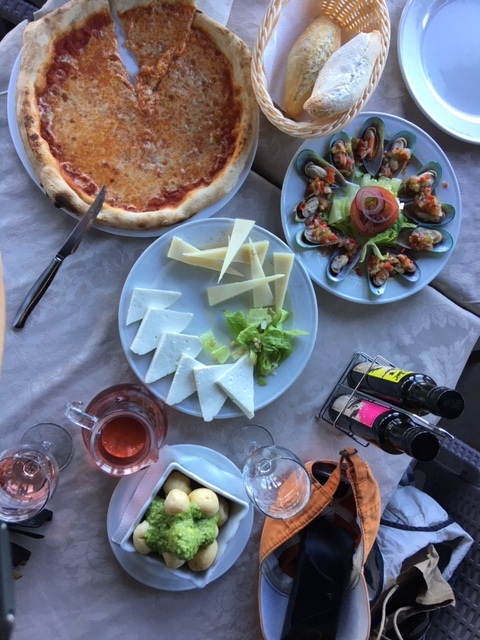 Another meal in the touristy but pleasant town of Betancuria. Fearful of a hungry spring onion, we hastily chose Taverna de Garden, which at least has a lovely open-air setting and a kids’ menu (which is not always easy to find the Canaries, given that it is European and which we think is a very good thing but we needed something easy and recognizable at this moment). Again, pleasantly surprised. The breaded chicken is unlike the yucky, manufactured-looking chicken nuggets that kids in the US are accustomed to and the portion is HUGE (B happily helps spring onion plow through it along with the very well-fried chips and aioli). We also share a decent goat cheese plate with good jam and honey accompaniment. 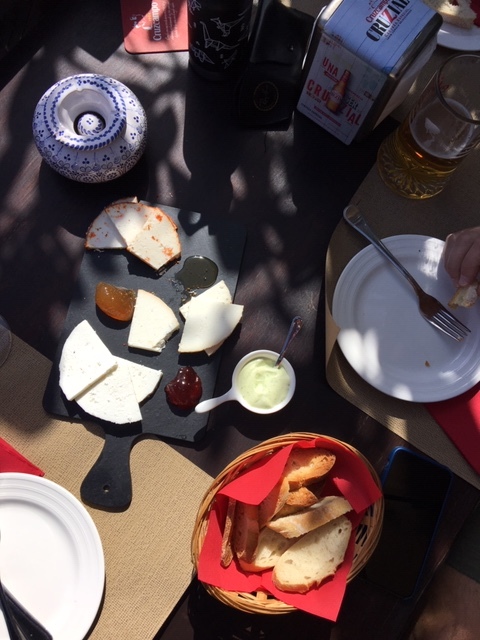 We have a fancy-ish dinner at La Vaca Azul in our home base town of El Cotillo. We ordered the seafood paella, fresh grilled fish for spring onion (which is very good to us, but not to him but he surprisingly still eats most of it). We have little experience with paella, and while the first few bites were tasty (nicely al dente rice but no soccarat), I got flavor fatigue about 1/3 of the way through. Plus, very light on the seafood. Well, we got paella out of our systems. Their mojo verde is less garlicky and flavorful as the La Factoria version. 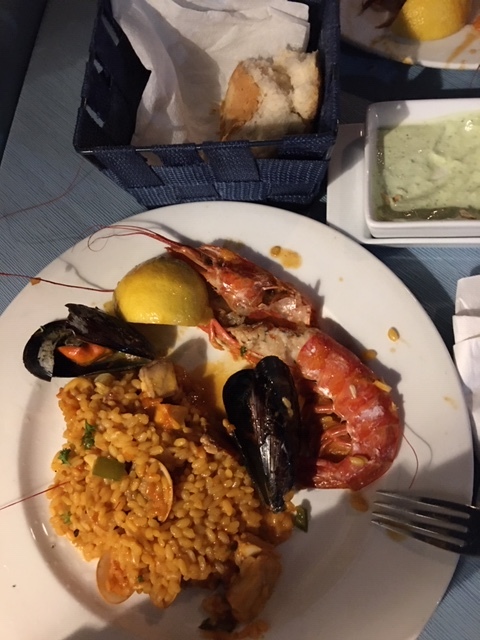 Then off to Gran Canaria, where we stayed in an incredible house in Santa Brigida. We check out Las Palmas, which is too crowded and hectic for us. Crazy traffic. We have a mushroom veggie burger and Mexican wrap at Bioloco, which has a cute, hipster-ish vibe (but not annoyingly so). 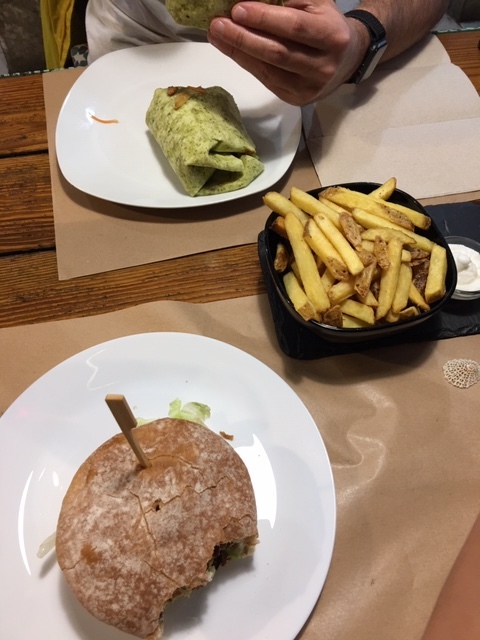 A good meal at Peccôu de gôa back in Las Palmas (we had to go back to check out the unbelievable aquarium). I had read that they specialize in Genoa-style chickpea pancakes. We got ours with leeks and mushrooms, along with a good margherita pizza and a smoked burrata. I think I liked the chickpea pancake more than B. It was good but a little bland, but I think it’s supposed to be like that (?) 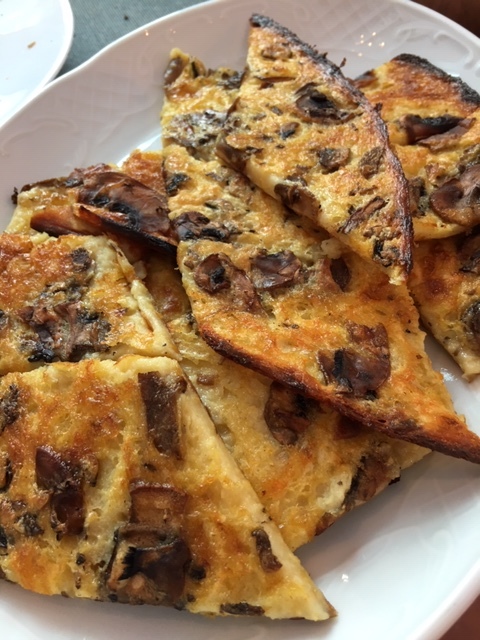 Probably the best meal of the trip was at a very humble place in Agaete, Mi Hermosa. Tiny place that was packed by 1 pm. We had some of the best fried fish we’ve ever had (they look like nothing but once they hit our mouths, we were blown away, even spring onion loved them…difficult to describe how good they were…topped with mojo verde and called “tacos”), awesome fried squid, potatoes with wonderful mojo rojo. We accidentally ordered fish fillets as well, which we struggled to finish, but daggonit, we did. Many thimbles of red wine and cold draft beer to help us with that endeavor. 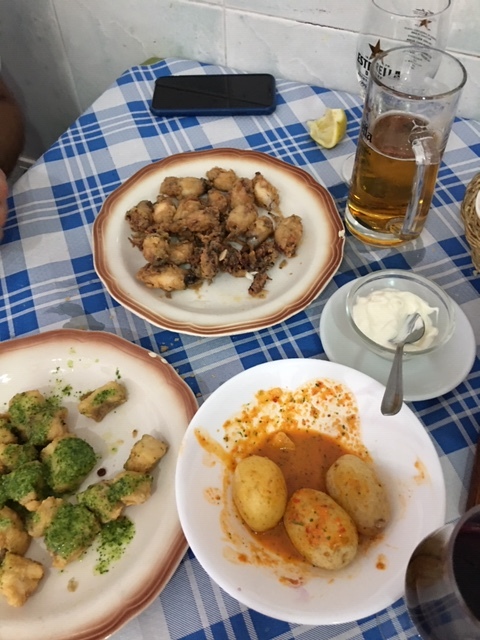 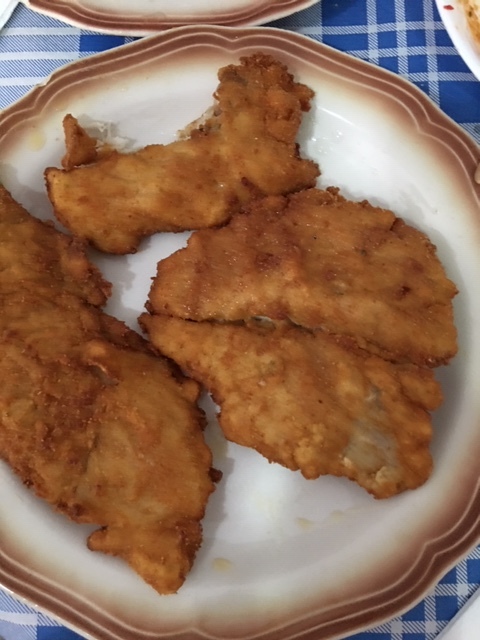 We hit the small, expensive, but lovely market Santa Brigida craving some veggies (watercress and cherry tomatoes) which I turned into a pasta. Lovely local cheese and wine stands (again pricey, but we didn’t mind). 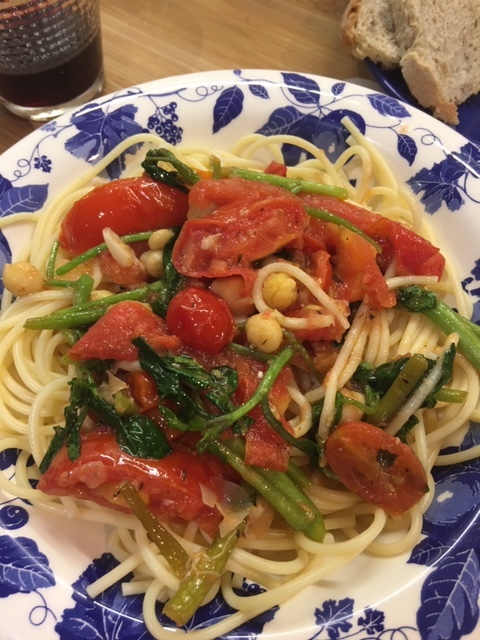 Our splurgiest meal at Texeda in Tejada. We didn’t expect it be such a fancy place and they staff took pity on us (we didn’t have a reservation and the place was completely booked). In the Spanish way, this was at 1 pm and the reservations were coming in around 3-3:30 pm. They asked if that was enough time for us to have a meal - of course! We’re silly Americans! We over-ordered - an underwhelming smoked broccoli starter, superfluous Canarian potatoes, enormous breaded chicken for spring onion, trio of tacos for B, and a veggie paella for me (guess I didn’t get my fill of paella after all). This paella was a deceptively richest dish. The mushroom and cream sauces that were dabbed on over the top were almost too rich - very unctuous mouthfeel. I almost couldn’t get through it all. Don’t get me wrong, it was delicious, but again, I think flavor fatigue nearly got the best of me. B was quite pleased with his tacos. Good local beer and wine. 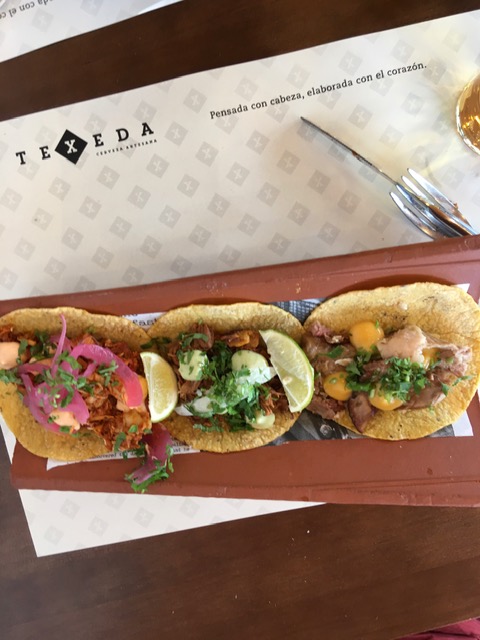 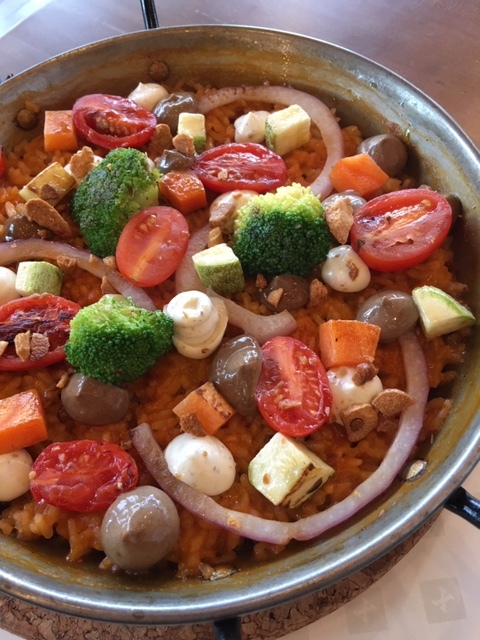 One of our meals was at Mar Azul in Puerto de Mogan and it was another winner. We opted for the whole red snapper, which was expertly butterflied and de-boned. Cooked perfectly. Awesome sauteed padron peppers to start. 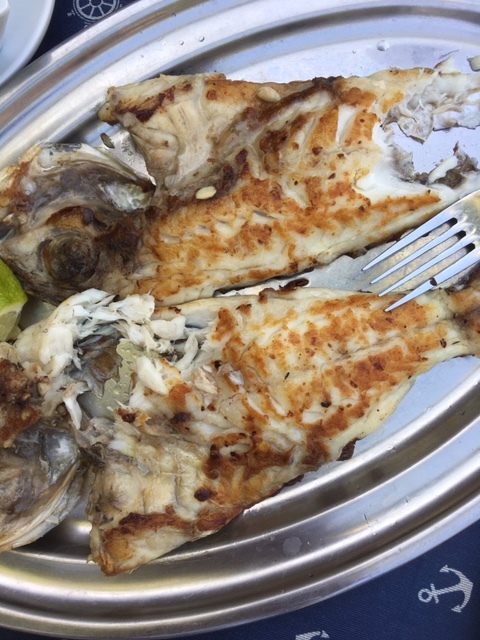 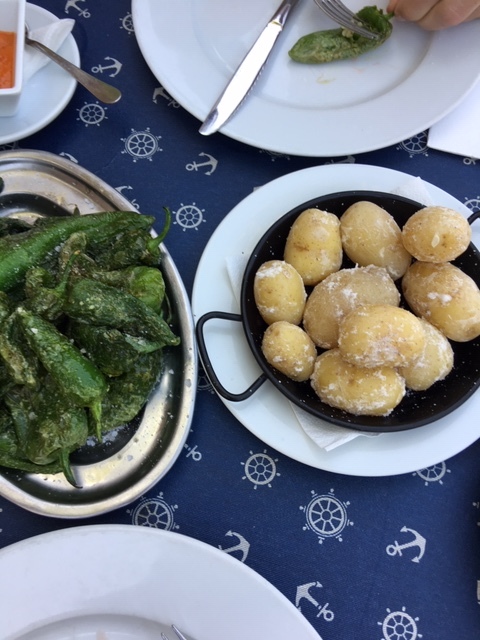 And that’s a wrap!

Good to hear that you ate very decently.

Mrs Harters is currently in Tenerife with her two sisters and mother. Eating is not going well, apparently, but this isnt surprising. Mother & one sister are very, very unadventourous so it is lowest common denominator food that has to be found. Luckily, J knows the touristy places as the places we usually avoid.

By the by, I’m often surprised at the good quality of the Canarian goats cheese.

Gawd I love your trip reports! You definitely put Iceland on my list but can’t tell if the Canaries should also go on it…