When one thinks of “Cocktails”, it might run the gamut of memories and emotions, from the terrible swill that you downed too much of in college, to tasty alcoholic beverages for a fun night out or an overpriced waste of money, to anything in between. In recent years, Cocktails have gotten a major leveling up, with many restaurants offering “artisanal” or “farmers market driven” drinks, and this movement around our city can be traced back to Bar Maestro Julian Cox.

For those that may not know the name, Julian Cox has been given many titles over the years, starting off as Bartender, Bar Manager, Beverage Director, Consultant, and much more. But amongst my friends, we prefer to call him a Bar Maestro. He burst onto the scene with heading up the bar program at Rivera, the ahead of its time Alta Cocina Restaurant that featured some tasty modernized dishes from across Mexico and beyond from Chef John Sedlar.

At Rivera, Julian Cox developed a Cocktail program that blew away everything in L.A. at the time. He brought in the usage of truly seasonal, farmers market ingredients, herbs and fruits grown from local farmers, and had Housemade Herb and Fruit-infused syrups, developed fantastic drinks that were balanced (not overly boozy, not way too saccharine like some are wont to be). You could down a few of Julian’s amazing Cocktails and not even realize how many you had gone through. Purple Rain. Strawberry Fields. Sabertooth. The French Tickler.

Julian’s reach extended beyond just what he made. He had a strong initial group of bartenders that studied closely with him and they were also pretty good. Julian’s influence could be felt from Rivera to Bestia, Republique, Petty Cash, and many other places, and his last L.A. home was The Fiscal Agent (before he sold it and left L.A.).

Since then the state of Cocktails in L.A. has been pretty abysmal. Overpriced, overrated places like The Walker Inn and Death & Co. (Los Angeles) were a slap in the face for those that have enjoyed Julian Cox’s drinks before.

But like Torihei’s recent revival, out of nowhere, Bar Maestro Julian Cox has returned to L.A. to open up a new Bar (and small bites eatery) called The Hideout Sycamore. 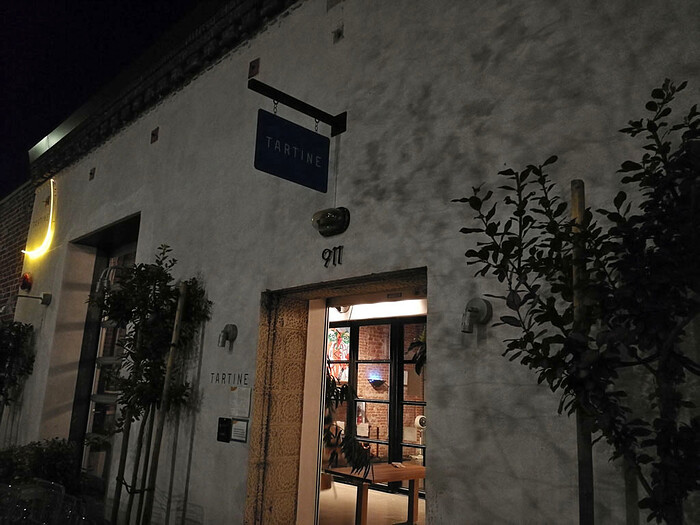 The Hideout Sycamore has opened right next door to Tartine Hollywood. During their soft opening 2 weeks ago, as we walked in, we saw the mastermind himself, Julian Cox, prepping drinks for the evening: 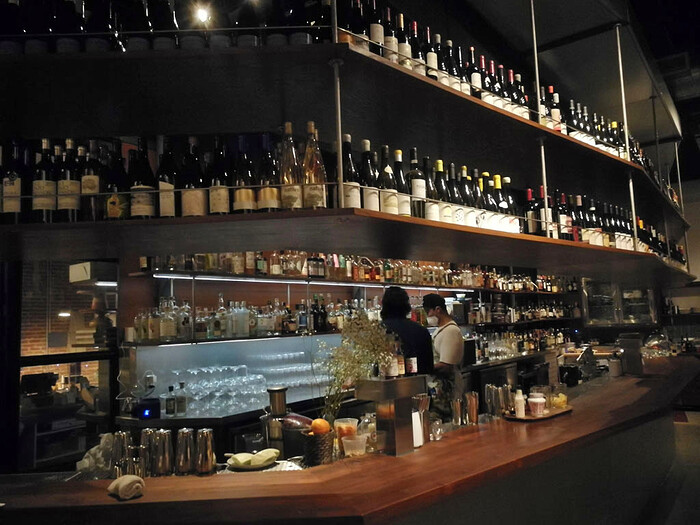 The Hideout is a comfortable, relaxing space, part restaurant, but the bar is the main draw. Julian Cox has partnered with co-owner Alex Marchesini to open up this Mediterranean-style Small Bites Restaurant. 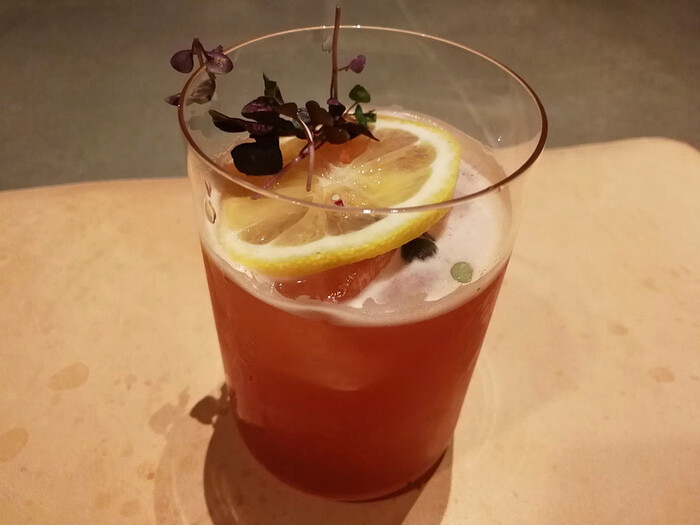 Stunning. They don’t make Cocktails like this in L.A. anymore (as absurd as that sounds). For someone to be able to tame Rye Whisky so it doesn’t dominate the rest of the ingredients, the gorgeous herbal bright notes from Shiso Leaf, lovely citrus notes from Lemon and Violette Liqueur. It’s lightly sweet, ridiculously sippable and dangerous!

And Julian’s Cocktails are in the ~$14 - 15 range, far more reasonable than most trendy places around the city that are nearing (or exceeding) $20 per drink (ugh). 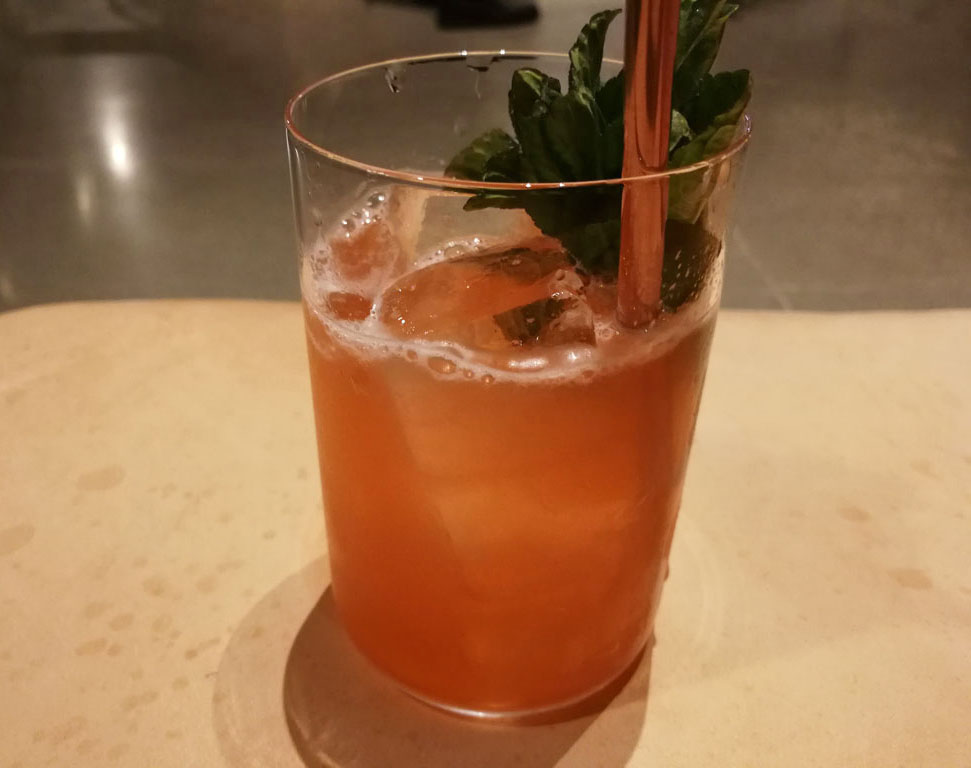 We were reminiscing with Julian about his legendary Strawberry Fields drink back at Rivera when he decided to surprise us with his impromptu homage to his own OG drink! (He didn’t have all the exact ingredients since this isn’t on the menu (but you can special order / request), but this was as close as he could get to it, unprepared.)

Taking a sip: Excellent! The greatest strength of Julian Cox’s amazing Cocktails are the perfect balance that he strikes with each one of them. They are never overly boozy; never too sweet or synthetic. It just tastes like this amazing, enjoyable, delicious drink that happens to have some alcohol in it, but done just right. And the flavors are standout as well: Farmers market Strawberries, fresh Mint, Tequila all gel together beautifully. 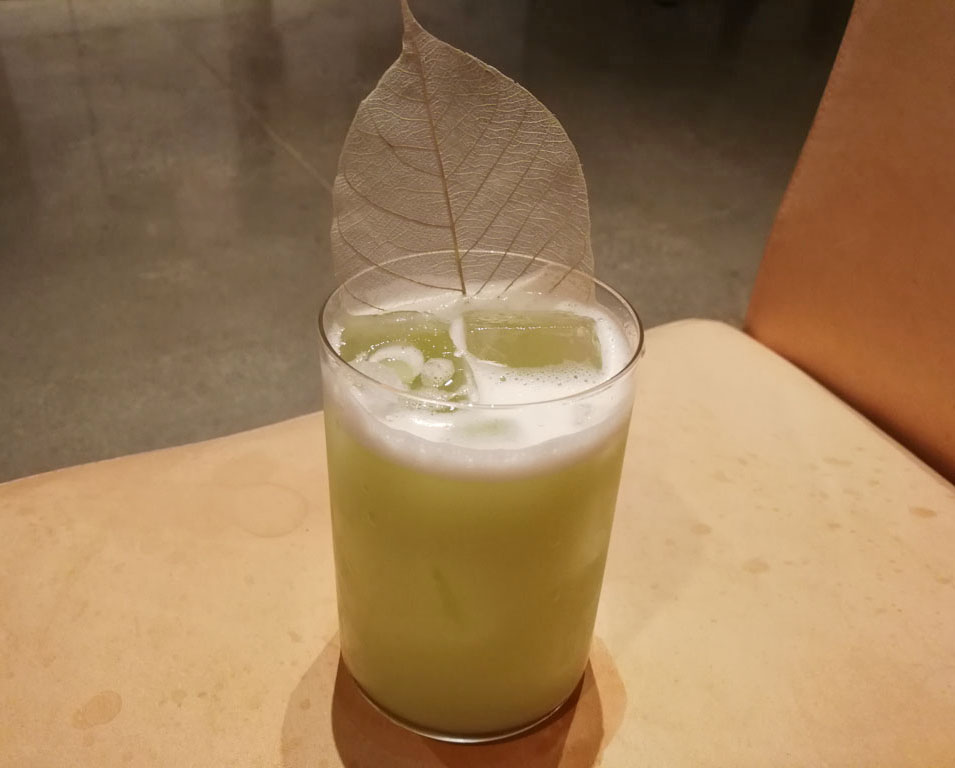 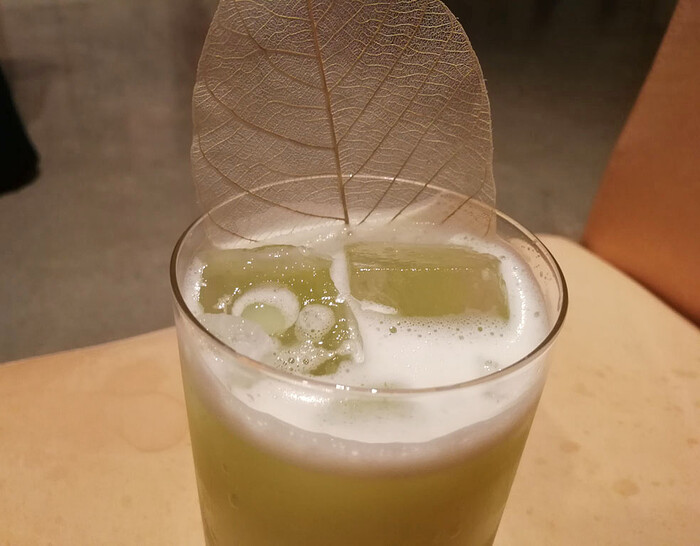 Visually stunning, a gorgeous look with the translucent leaf, and hilarious punny name

(FYI: Julian historically has chosen names that are puns or have some cultural tie-in of some sort), the taste is even more amazing!

First, the English Peas do not overwhelm: It adds a real vegetal earthiness, but it’s not dominant. The Tequila is there, but you almost don’t notice(!). There’s a beautiful light Basil note, and the Housemade Almond Tonic adds a nuttiness.

It’s RIDICULOUS. And SO GOOD! 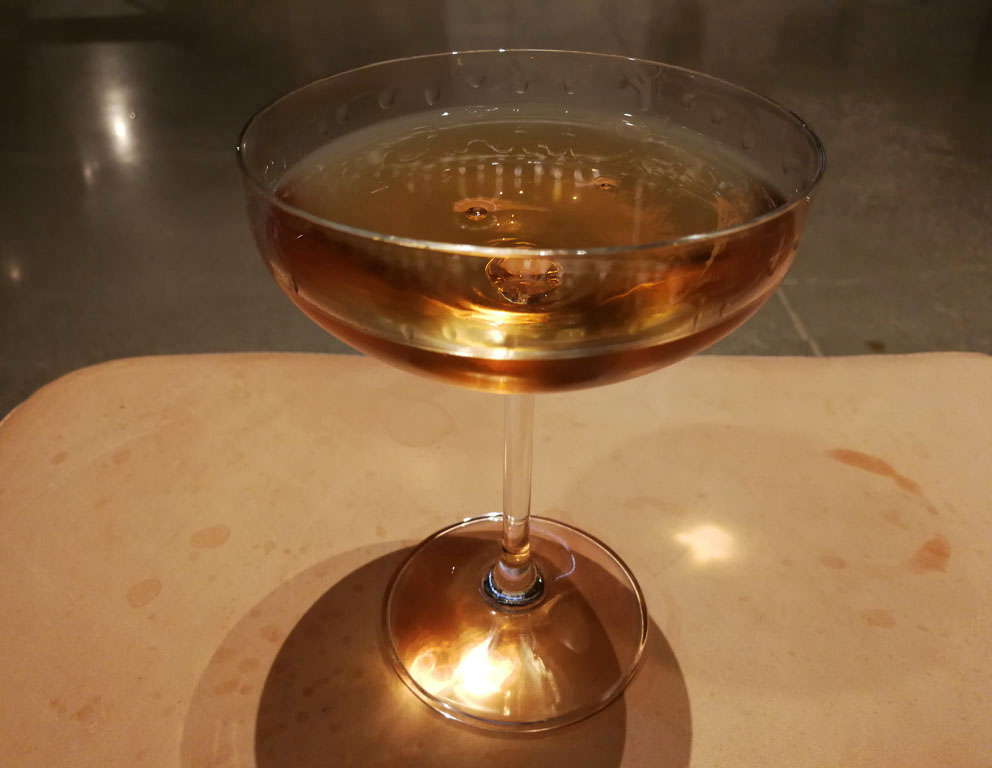 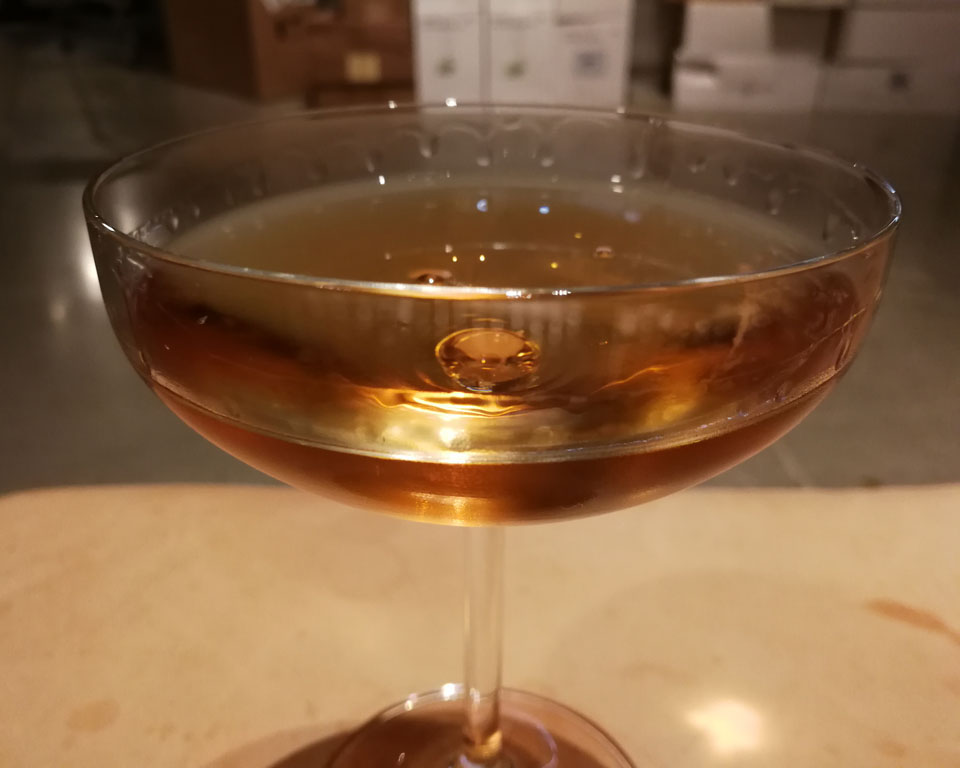 And for a Stirred Cocktail, Julian continues to show his prowess with a fantastic off-menu drink. The Amaro, Vermouth and Gin are all truly balanced and the Pear infusion is subtle but helps to mellow things out and bring out some light fruitiness. Delicious! On our 2nd visit, the official Grand Opening weekend was in full swing and the socially distanced tables outside were all full. I started with: 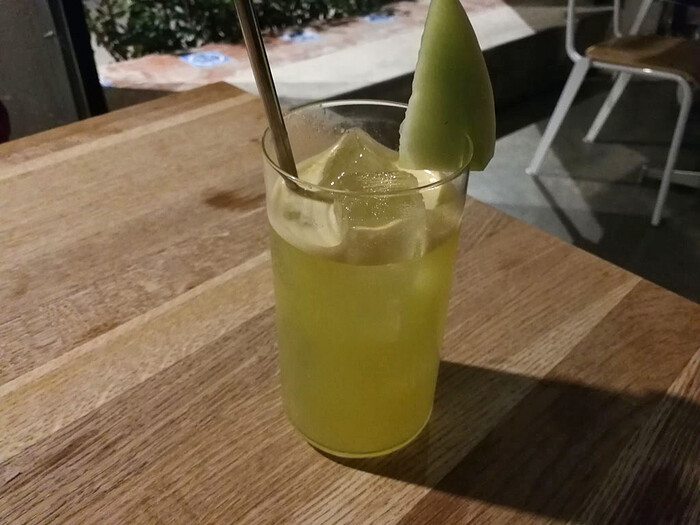 The puns keep on coming!

Named after the movie “Working Girl” (starring Melanie Griffith and Harrison Ford), I’m not sure how this relates to the movie, but it’s delicious!

Melon Juice, bright Lemon, works great with Dimmi Liquore di Milano, Gin and Midori. Yet again, it tastes like something you’d want to sip, a great freshly made Aguas Frescas perhaps, but with alcohol perfectly folded within and you almost don’t even notice. 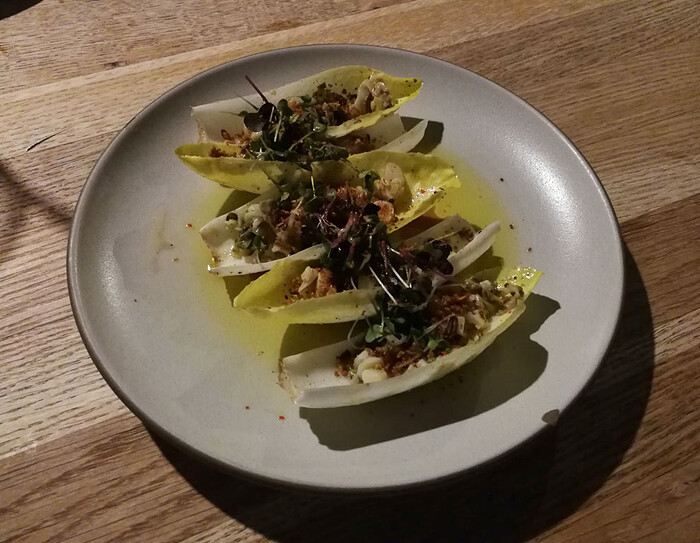 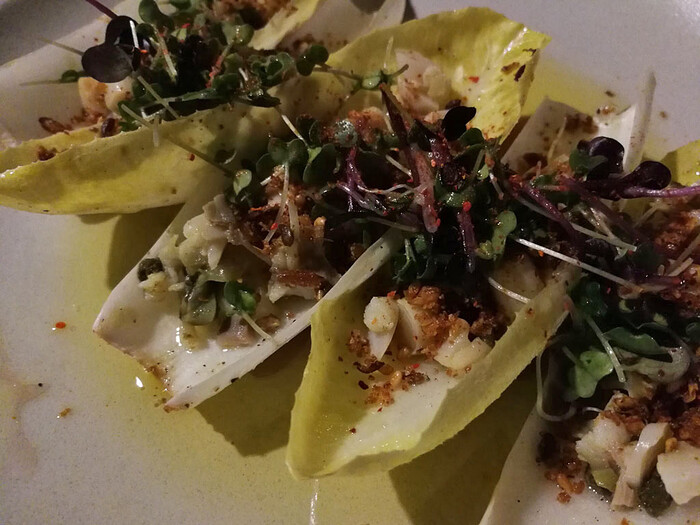 The Hideout Sycamore offers a very small menu (currently) of Small Bites sort of in the vein of Pincho (or Pintxo), the Basque version of small plates snacking with your alcohol. The Razor Clams on Chicory Pangritata sounds great. And the Razor Clams are fresh with zero brininess.

However they are chopped up into tiny bits, and with the Shaved Toasted Bread (which adds major crunchiness), you lose the Razor Clams. We tasted more Chicory and Toasted Bread Shavings than the actual Razor Clams themselves. Excellent Extra Virgin Olive Oil. 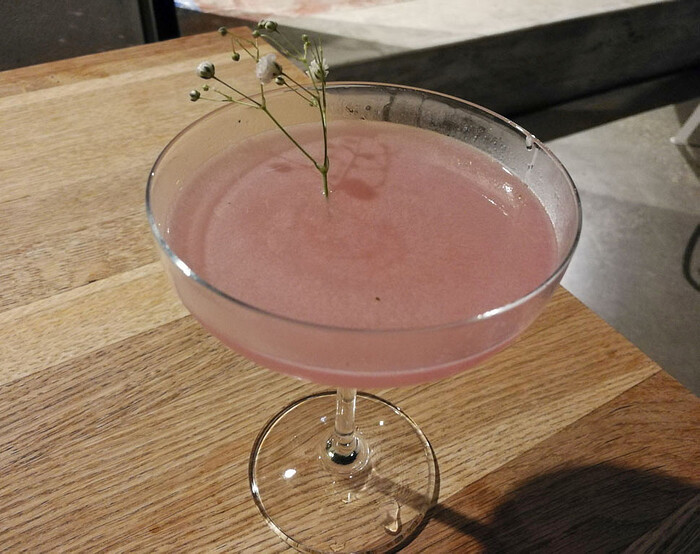 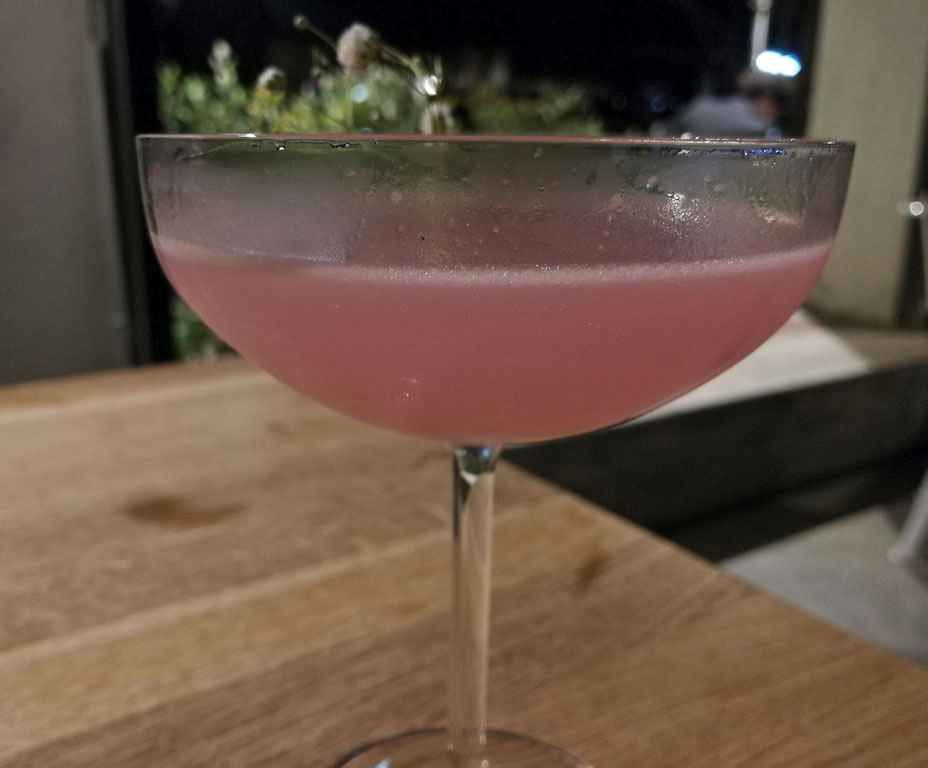 Julian mentioned this as a forgotten classic, but one taste and the only thing you can understand as the relaxing waves of floral notes, lovely citrus, delicate sweetness and perfect balance hit your palate is that there is nothing like this in L.A.

Easily one of Julian Cox’s best new Cocktails, and so far above what’s being offered around town right now. Outstanding! 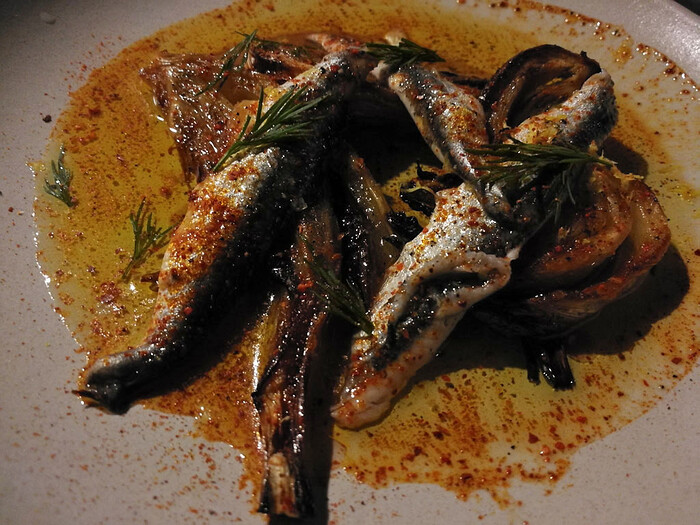 You’re hit with a lovely ocean wave, the fresh Anchovies wonderfully complemented and mellowed by the Orange Oil, sharp, bright Dill, Lemon Zest and the acid of Vinegar. An excellent bite and it paired nicely with our Cocktails. 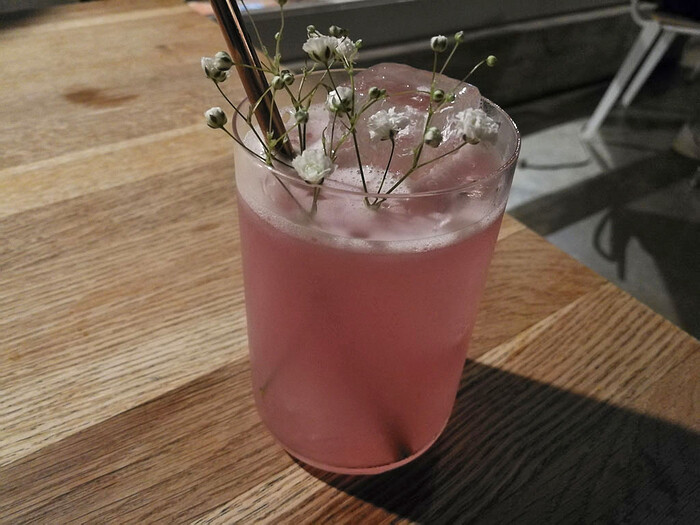 Another fantastic Cocktail prepared off-the-cuff from Julian: His homage to his other OG drink, Purple Rain. Taking a sip: Beautiful, delicate heat from Freshly Grated Ginger, floral Violette and pleasing, tart-sweet Lemon Juice. Even though Julian didn’t have all the ingredients, this was close to what he used to make at Rivera and another outstanding Cocktail. 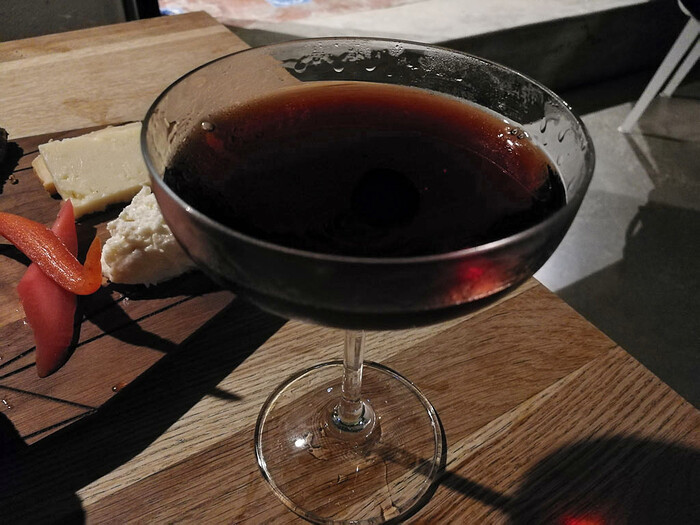 One of the best “Brooklyns” I’ve ever had! Stunning in its balance, the Bourbon never overpowering the rest of the ingredients. Spicy, sweet (not overly so), very good! 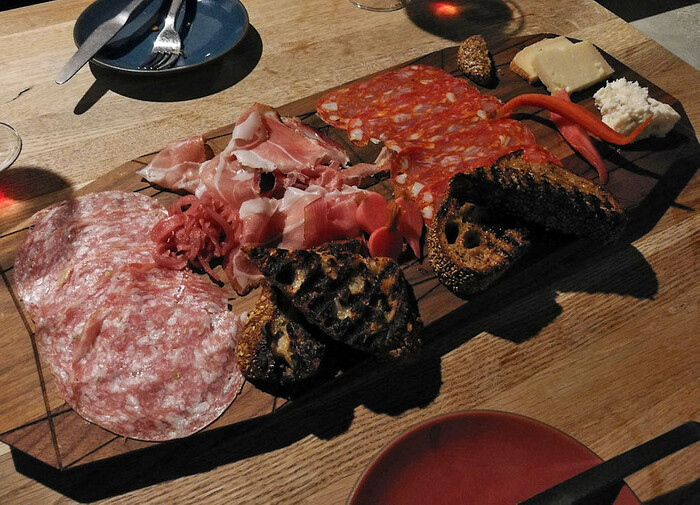 For their Charcuterie Board, this week, all of the Salumi were imported from Italy. Co-Owner Alex mentioned that next week, he might try and feature all selections from Spain. 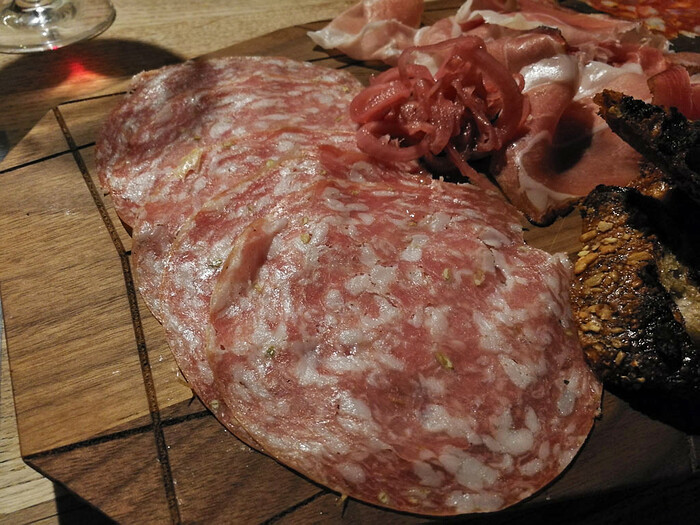 Even though none of the Charcuterie were made in-house, it didn’t matter. These were high-quality selections. The Fennel Salami was outstanding! There was a fantastic porcine flavor seeping through in every bite. My favorite from the Charcuterie Board.

They also use Tartine Bread (which makes sense since they are just next door). 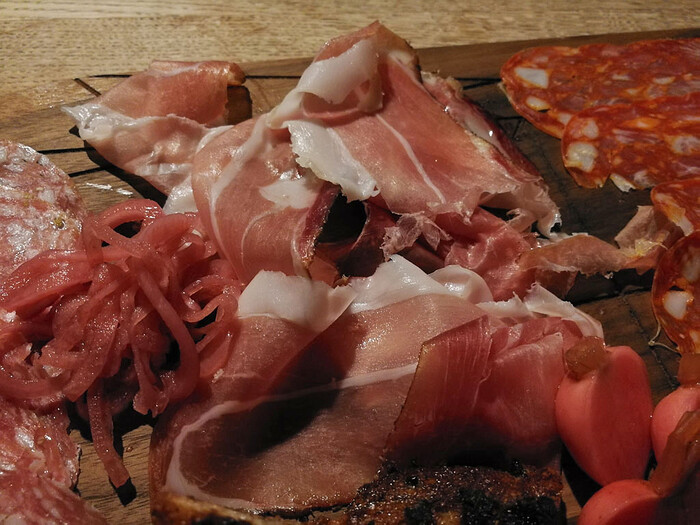 The Speck was the softest of the 3 selections. Also quite delicious and delicate and with a nice savoriness. 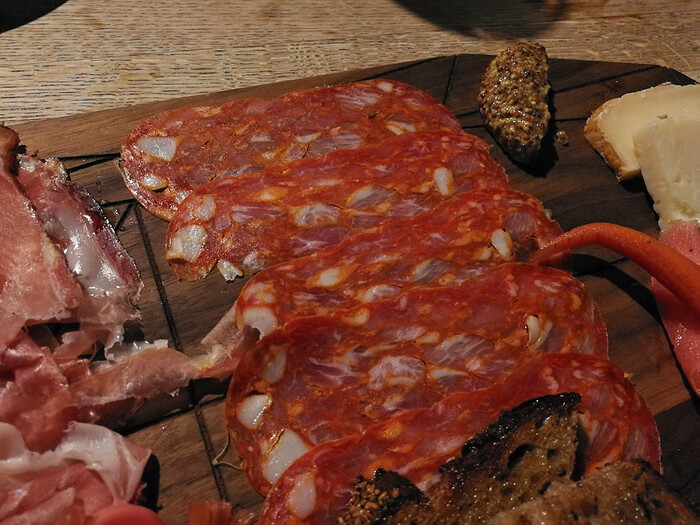 Not overly spicy (which is good), this had a gentle heat, and a real porky flavor coming through in each bite. 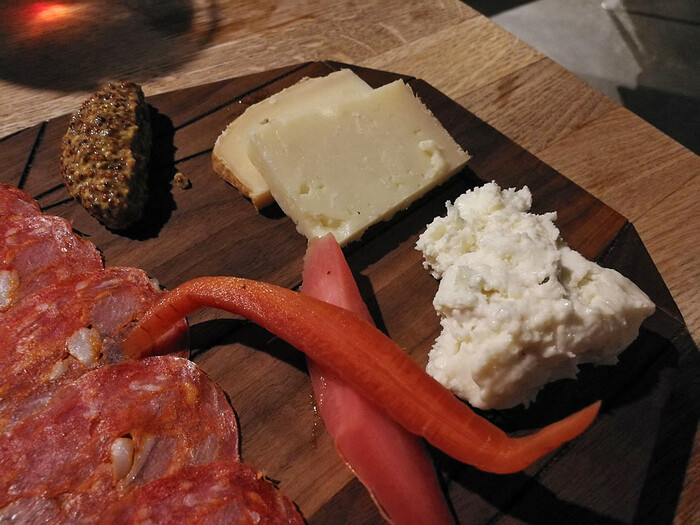 Even the 2 Cheese selections were standout, with the Goat Cheese being absurdly delicious!

I love various Goat’s Milk Cheeses, but whatever selection it was on this evening was one of the best ones we’ve had in recent memory.

The Hideout Sycamore has instantly become the best place to get Cocktails in L.A. With the return of Bar Maestro Julian Cox, the city’s Cocktail scene has been greatly elevated. If you’ve never had a Cocktail by Julian Cox, now is a great opportunity to try one and understand his greatness. Make sure to ask Julian to make one for you (he mentioned he’s hiring additional bartenders to help, but as he’s Co-Owner, he should still be in the house making drinks).

The drinkability, balance, interesting flavor combinations all underline Julian’s skills. He’s not showy, nor does he try to sell overpriced, bling Cocktails like some places (all Cocktails were $14 - 15). The Hideout’s small plates menu, while limited, has some standouts already like the Boquerones on Grilled Fennel, and the Charcuterie Board. We don’t know how long Julian Cox will be here, but while he’s running The Hideout, enjoy this restored treasure to the City of Angels. 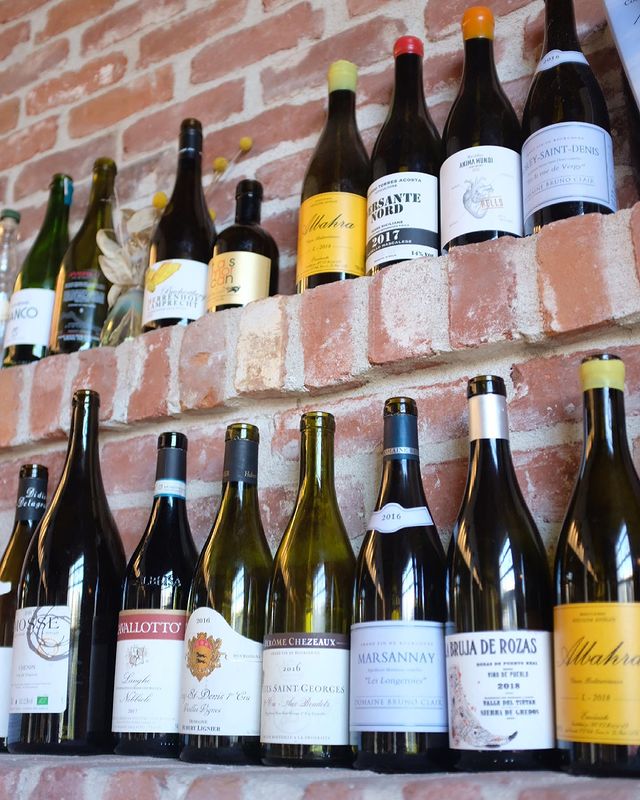 Nice. This reminds me of my visit to la in 2011 . My nephew dropped me off in downtown at 7 am . I found king Eddy saloon . In those two hours I was there I found it to be a gem . I’ll never forget it.

The reason I never forgot it is was because I didn’t have to go to the movies that day . I ordered a Budweiser and a hot dog . While watching to men with walkers almost going to fisticuffs over aarguement. Meanwhile there was a man chain smoking in the smoking section behind the plexiglass looking on . Bright white dentures with a plaid hunting jacket . I felt like I was on the set of Terminator.

The Speck was the softest of the 3 selections. Also quite delicious and delicate and with a nice savoriness.

I still dream of the duck speck I had at Gwen.

How was the rest of your meal at Gwen?

I’ve only ever been for lunch (their sandwiches), but was hesitant to try their dinner tasting menu series when they first launched. Thanks.

It was like eating seasoned penicillin. In a good way.

Tragic news from Eater LA: LA County Health Department shut down The Hideout because the liquor license was for Tartine only (that they share the space with). Seems like they were told they could use it because it was for the entire space, but the Health Department said they can’t. 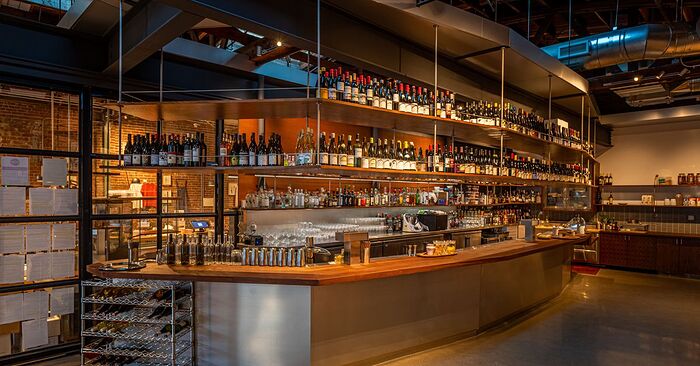