The last meal of our trip to Lancaster happened to be the best overall one. After three straight days of “American” food, I needed something with a little pop and culture. In browsing menus of restaurants while walking around the city, we stumbled upon Annie Bailey’s Irish Public House. Did we really want pub fare at this point? But I saw a shrimp curry on the menu, and Justin loves bangers and mash, so we had the fastest agreement on where to eat in our history. We headed in at the right time. There was a short line out the door which quickly got longer.

This restaurant must be a sight to behold in non-COVID times. The bar is enormous, rustic, and well-stocked. But alas, it is not being used due to restrictions that I mentioned in an earlier post. Annie Bailey’s is very fortunate to have such a large building at their disposal. This made it possible to adequately socially distance tables and accommodate a large crowd. The place was absolutely rocking on this Friday night. Something I have observed: while restaurants more in the country tend to draw an older crowd, the city gets a much younger one. That was the case with Annie Bailey’s, which was the liveliest crowd we experienced on this trip. It felt great. 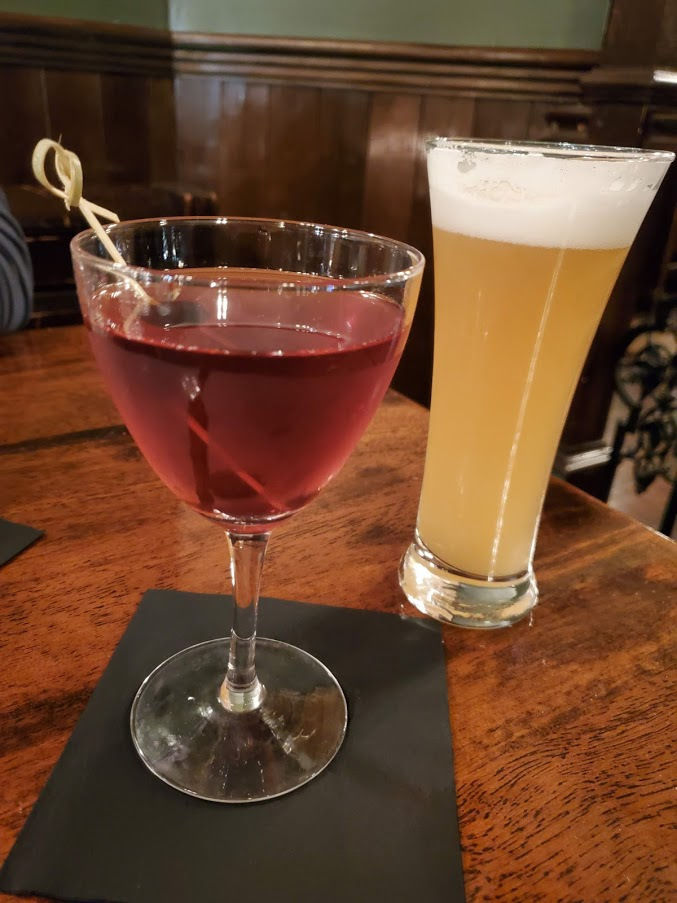 Having already known I was getting a curry dish, I wanted Scotch to go with it since this whiskey goes well with Indian food. So, I ordered a Scotch Manhattan (otherwise known as a “Rob Roy”) which was deliciously crafted and served in a beautiful coupe. Justin started out with a beer before noticing a frozen pumpkin spice latte on the cocktail menu. This contained vanilla vodka, organic pumpkin, fresh ground hard spice, milk, cream, and a vanilla demi-whip. He thought it was one of the best drinks he has ever had. I even took a sip and thought it tasted like a burst of fall. The demi-whip on top was unreal and really brought the drink together. With all the pumpkin spice rage every fall, I’m surprised this was the first time I’ve ever seen such a concoction. 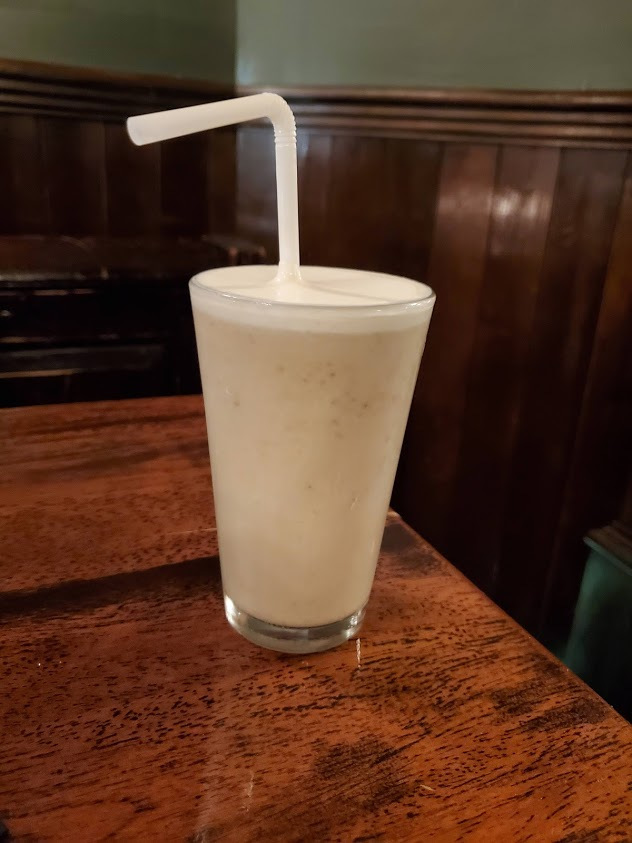 Next came the appetizers. I selected the curry chips (yes, more curry) and Justin wanted the spinach-artichoke dip. Both were so good that I do not know which I enjoyed more. The sauce that accompanied the fries was thick and flavorful, which was a good preview of what was to come with my shrimp. As for the dip, it was insanely creamy. What was the secret ingredient? I thought it might be cream cheese because the consistency was so rich that it broke the accompanying tortilla chips if you were not careful. I’ve never had a dip like it. And I have to add that it was burning-hot, not lukewarm like so many other dips usually end up. There was also grilled pita on the side, which was a nice addition, and I even dragged some fries through it as well. We could not get enough of either. 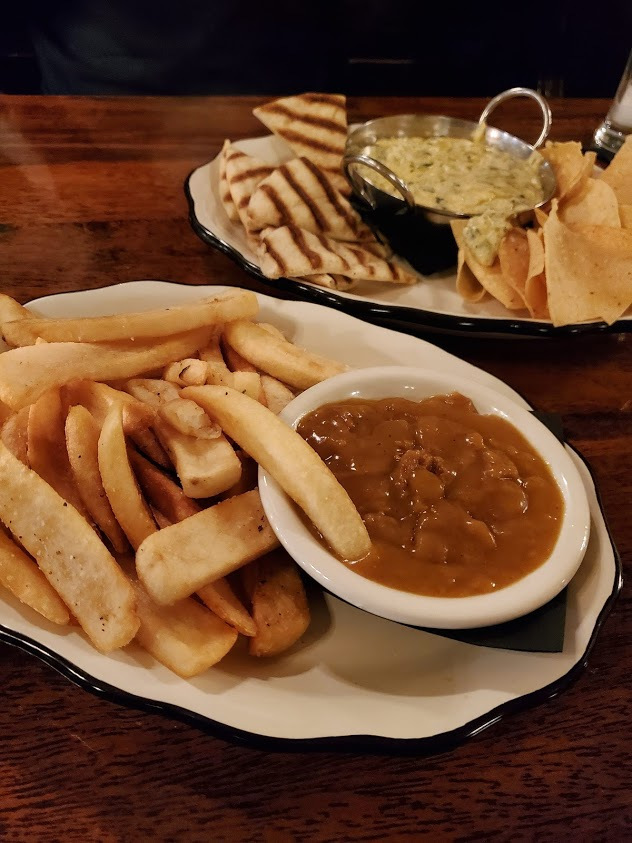 Our entrees were better than the appetizers. I requested my curry shrimp be made spicy, and they actually listed. These grilled shrimp were tossed in a sweat-inducing spicy sauce with peppers, mushrooms, onion, and pineapple over a fluffy coconut basmati rice. This would have been a great dinner for a cold winter night—keep that in mind if you plan on eating here in the next few months. The shrimp were plump and tender, and the sauce became addicting without totally killing me (because I can withstand more than the average human). Thank you Annie Bailey’s for actually making this hot! 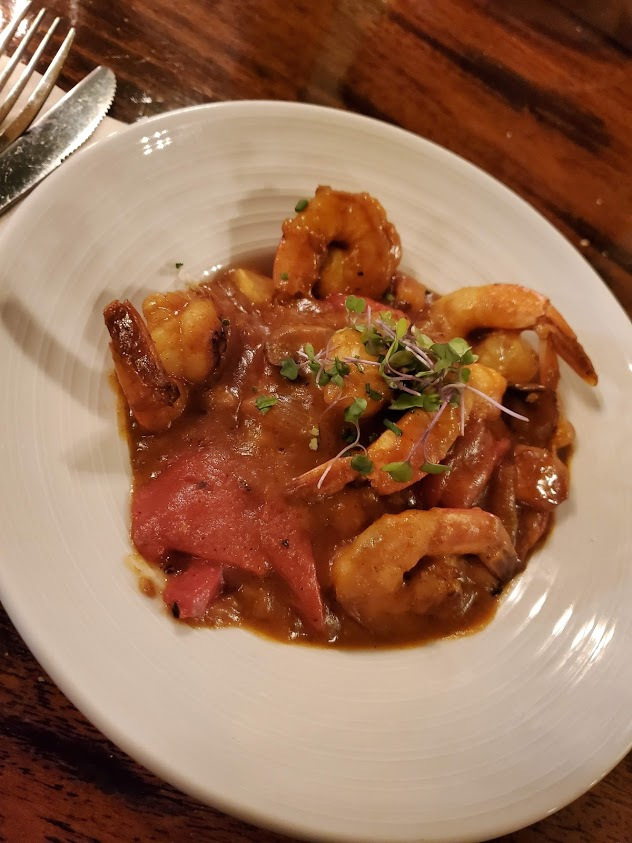 As for Justin’s, he scarfed his down without complaint. The two bangers were cooked perfectly and served over creamy mashed potatoes and a rich onion gravy. We both agreed this was the best all around dinner we had on this trip, and we ate at a few good places. 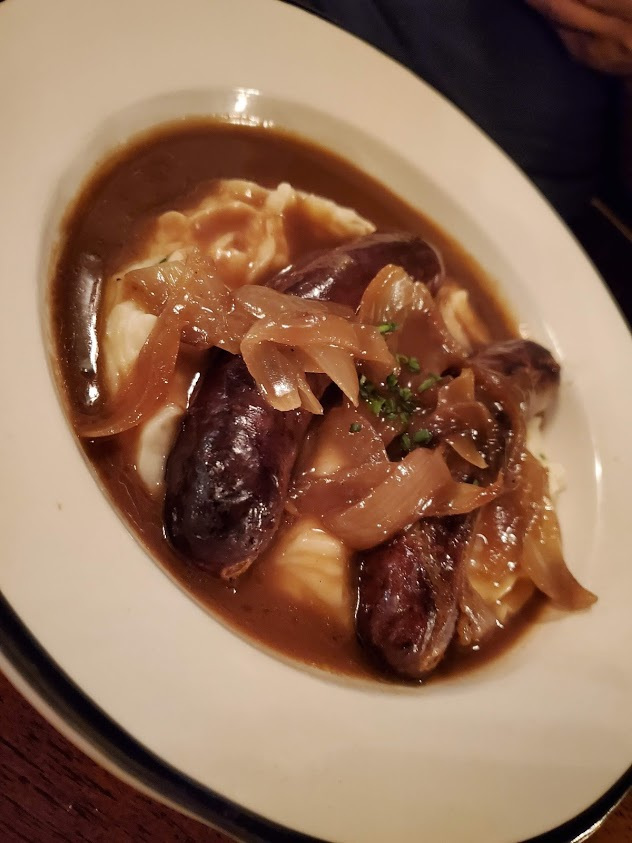 In short, Annie Bailey’s will be on our list to visit next time in Lancaster City. Just like with The Belvedere, we wished we could have seen this place in better times. The atmosphere would have been even better to accompany great drinks and killer pub food that I would never in a million years describe as the popular moniker “pub grub”. These were high-end dishes without being over-the-top or pricey. This is a solid, fun place to hangout. Service was attentive and even though tables were asked to keep seatings to 90 minutes, we never felt rushed. 4.5 out of 5 stars to Annie Bailey’s, which is another high score for a first-time visit.