Coldfall, to be more precise. First this Northerner has heard of iguanas as a menu item.

Florida's iguana-geddon: cull of a pesky interloper or tasty windfall?

Great read. Thank you! We ate alligator when we were in the Everglades. Not a high end place. Tasted like dried out pork. At this point in my life, with my limited appetite and labeled “senior with a compromised immune system” I doubt I would venture to eat Iguana. I don’t even risk sushi anymore, sadly…

They’re reptiles. They taste like (surprise!) chicken more or less. Not worth $60 a pound to me. I love frog legs though.

Thanks for posting! I have to confess, when I first looked at the topic title, I thought it said Ambien windfall. Gave me a good chuckle!

chicken of the trees

Sounds great in a taco . Not worth that price at all otherwise

Ha, you are funny Andrea!

Coincidentally enough, I just finished re-reading Carl Hiaasen’s Chomp, in which the primary adult protagonist is suffering from chronic headaches and double vision after a 7-lb frozen-stiff iguana falls on his head after a snap frost…

But back on OT, I’ve never heard of eating them either, and I certainly won’t be at $60/lb! They’re an invasive species for Pete’s sake (so not exactly scarce), and not exactly hard to catch, either (even when they aren’t literally dropping out of trees…)

They show up pretty regularly both fresh and frozen at a local grocer, Fiesta Market. 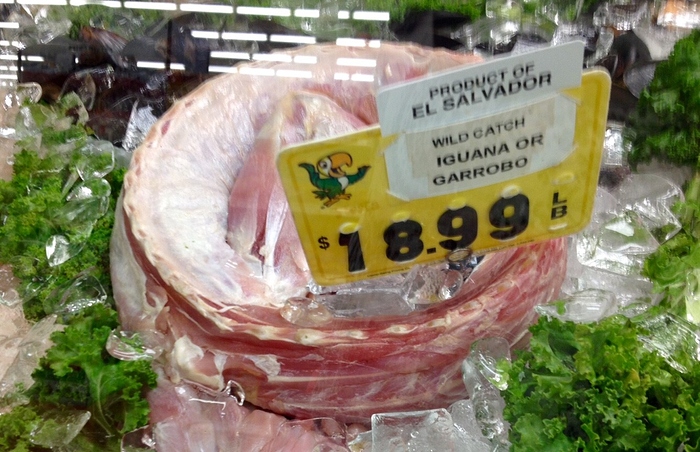 (and they’re reptiles, not “fibians”)

They’re commonly eaten throughout the Caribbean and Latin America. Cheap, easy protein. They’re also a nasty, ill-tempered invasive species that devours local fauna, so nobody sheds a tear when they get picked up like windfall apples.

Haven’t eaten it, but certainly would if given the chance.

A young Bourdain in A Cook’s Tour had him eating an Iguana tamale. Commentary was hilarious, ending with “worst episode. Ever”.

Had enjoyed his shows before that, been a devoted fan ever since.