Amma’s Kitchen arguably makes some of the best dosas, period.

They have moved several times. First, from Desi Galaxy in Somerset, NJ, where Jim Leff once visisted: http://jimleff.blogspot.com/2011/11/t…

(Currently Desi Galaxy in Somerset has dropped a bit in quality since that post, with the Gujarati and Southern Indian, Bombay, Indo-Chinese options being a bit poor. However, the Ghanian stall is good, the Punjabi stall is still tops, and I’ve yet to try the Biryani/Pakistani spot).

Then, Amma’s moved to Flavor Junction Food Court on Oak Tree, and finally, are currently in their remodeled space in the “Mall.”

Whereas generally Oak Tree Road is a nabe comprised mostly of Gujarati and Southern Indian food, plus a sparse collection of Indo-Chinese and Punjabi restaurants, many of the restaurants have also gone downhill over the years.

Amma’s Kitchen, in my last 4 visits have been a cut above the rest, having eaten my way through restaurants on Oak Tree Road and Franklin Park and Somerset several times.

The menu is mostly reflective of South Indian/Tamil food, and they will proudly state "We are a South Indian restaurant’ when asked.

There are also a few indo-chinese options and other regional dishes, but stick to the South Indian options.

What’s best? The dosas are fantastic, toeing the line between crispy and crepey, with a masala that is a bit more spiced and flavorful than others I’ve tried.

Their flaky, layered parotta (3 pieces), served with chicken curry for ($10) on the menu is mandatory, found under the bread section.

The idlis are wonderfully fresh, pillowly, cloudy. The vadas are fried beautifully, with the flavors of lentil coming through, and the sambar and coconut chutneys are also made with care and are standouts.

I have yet to work my way through the whole menu yet, but am looking to try a few of the fish curries or the Chicken Chettinad and a few others.

The weekend non-veg thali was very good on my last trip, served with a delicious variety of curries, and a pretty good version Chicken 65 as an appetizer.

They also offer a special banana leaf meal the first Sunday of every month.

DAMN this sounds great! I haven’t had a dosa (good or otherwise) since I was last in a dive in Little India in Jersey City… I’m overdue!

Nice review!! My old stomping grounds, I grew up only a couple miles from there and went to high school even closer. (Bishop Ahr) Unfortunately after a few too many “failed” experiences in trying to digest Indian food I gave up on the pursuit since the enjoyment wasn’t worth the guessing game.

There are many impressively bad spots that draw in crowds daily and nightly. It’s spooky.

Generally, I avoid the food courts, Desi Galaxy I & II and Flavor Junction as I’ve found the food to be only pretty good (the latter being an excuse for families to have a place to bring their kids)

It is a bit overwhelming how many places there are.
Some of my go-to’s currently are EggMania and Chowpatty (good pav bhaji) for Gujarati
Tabaq (lunch buffet) & Lal Hutt (great lacha paratha) for Pakistani
Moghul Express for chaats and North Indian curries
Kwality for ice cream

There are still a few I want to get to. Sigiri for Sri Lankan, a few South Indian spots, like Swagath Gourmet, or the chain Biryani Pointe, or Spice House for IndoChinese, etc etc.

Are you from the area or do you travel there specifically for the food?

And… starving. Thanks! Will put this on the list! YUM!

I live in Keyport. Usually travel there for food with friends, or occasionally stop there on the drive home from work.

Moghul Express is where we get the sweets. Very fresh sweet shop selection.

Amma’s recently moved and reopened in Desi Galaxy at 1700 Oak Tree Road, where the former “biryani specialist” had a post.

That guy has moved into the Krispy Krunchy Chicken restaurant down by 1400 Oak Tree.

Amma’s is still as good as ever, proudly my favorite Tamil restaurant, extremely fresh ingredients, chutneys, my favorite dosa.

Below is a mysore masala dosa served on a banana leaf with homemade peanut chutney, tomato chutney, and sambar. 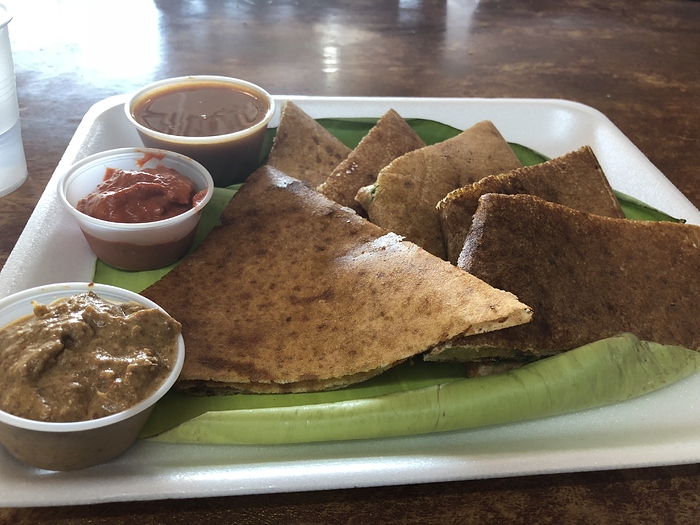 Flaky malabar parotta and chicken curry. They also offer a special banana leaf lunch on weekdays/weekends, but I think you have to call ahead to reserve. 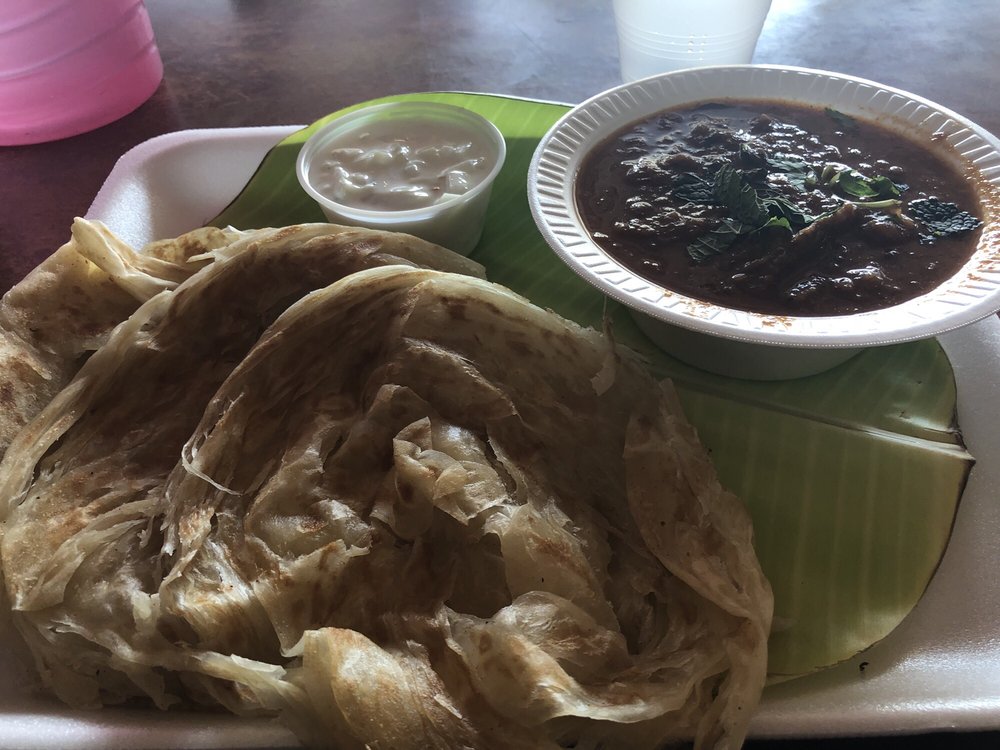 I need this!! The second pic looks dope.

Yeah, this spot is legit. They also have daily thali platters to sample their wares. 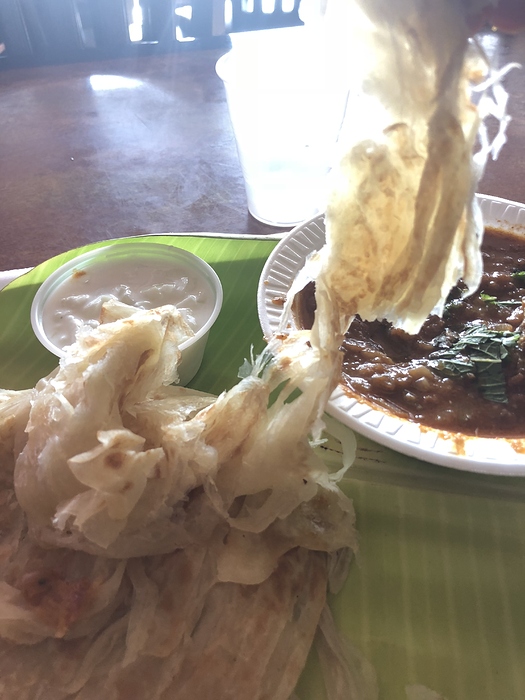 Gave this place a try today. Very hit and miss, but overall, I was disappointed. Some may disagree with my assessment of the bones, but that’s how I felt. Review below, originally posted to my blog:

At no time did I feel like I came to the wrong place. I was heading to Edison for something work-related, so I brought Justin along and figured we would hit up one of the many Indian restaurants in town. It is the capital of Indian food in New Jersey, if not the United States. In my area, there’s a pizzeria or Chinese takeout spot every five feet. In Edison, its an Indian restaurant. Northern, southern (and even Sri Lankan), sit-down, takeout, buffet, grab-and-go, they have it all. I had seen a sparkling recommendation for a place called Amma’s Kitchen on the Hungry Onion. Other online reviews were also excellent. Wanting something authentic and new, this was where we would grab lunch. 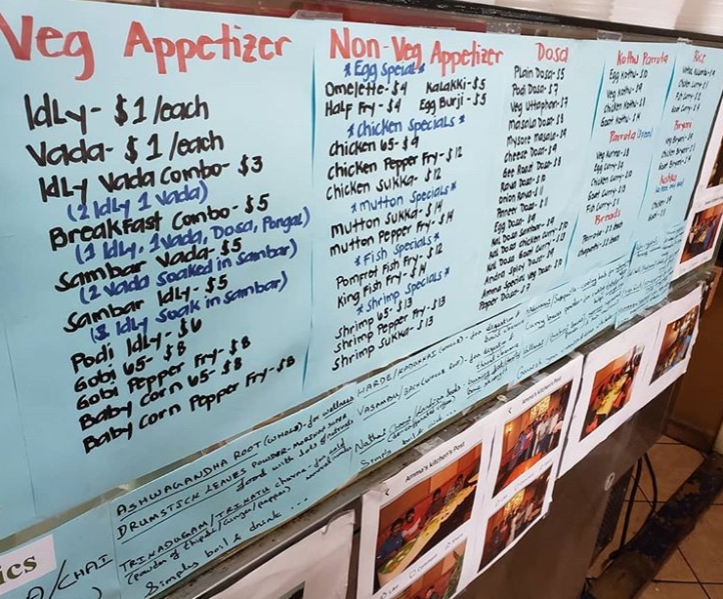 Amma’s is attached to another Indian restaurant called Desi Galaxy. There were at least four more in the same shopping plaza. When we first walked in, we were confronted by a small seating area. The decor was non-existent. No frills. The menu was handwritten on construction paper and taped to the counter. This was a true hole-in-the-wall, and I was excited. But then we glanced to our left, which was the other business. There was a steam table with all of the Indian “usuals”: tikka, makhni, curry, korma, paneer, etc. These would be northern Indian, which I am too familiar with. They all looked delicious, but we were here for something new. In all my experience with this type of cuisine, I never had a dosa. So Justin ordered one with curry chicken. In addition to that, I ordered Chicken Kothu Parrota (which I thought was a bread dish—more on that later), and Chicken 65 as an appetizer based on the worker’s recommendation.

There is no actual menu to hold, so as we were standing there reading the wall, the gentleman came out from behind the counter to help us. He was very friendly, and when I asked about an appetizer, he said that Chicken 65 was their most popular. Order placed, we grabbed a table. Each had a covered pitcher of water and plastic cups that we could help ourselves with. About 15 minutes later, the food emerged. It looked and smelled amazing. However, the actual eating experience would be very hit and miss. Justin’s curry chicken dosa was the highlight. While it was semi-familiar, it was also quite different. There was dark meat used (in all of our dishes) and the sauce itself was darker. It had a nice spicy zing to it. The dosa pancake itself was large and fluffy. It was perfect for tearing and dredging through the curry. The meal came with two of these. I was 100% satisfied with this, but that feeling would soon start to dwindle.

The Chicken 65 was perfectly fried to a crisp. There was no grease, the flavor was there, and it looked like it would be a homerun. Upon inspection, though, the pieces used were mostly fat and bone. I struggled to find any edible meat on them whatsoever (and for $9, even more disappointing). The raw onions and lemon would have been a helpful addition for some acidity and bite had I actually been able to eat the chicken.

Similar problems were encountered with my Chicken Kothu Parrota. This was technically a bread dish (strips of flatbread were mashed with the chicken and spices rendering them almost unrecognizable) but it was not what I expected. My first few bites were insanely delicious. There was a lot of flavor packed into this meal, and the portion was enormous. The spice was making my nose run, and it was accompanied by two killer sauces: more curry chicken and some kind of yogurt mixed with raw onions. Just as I was getting ready to exclaim this was the winner of the day, I crunched down on a large piece of bone. Not seeing it as a big deal, I put it aside and kept eating. That’s when I discovered more problems in the form of one bone after another.

Some were large, some were as tiny as a cumin seed, some were shards that were so sharp they probably could have killed me. I would not have minded them if this was a grilled dish, but considering all the ingredients were practically the same color and mashed together , this made each forkful a hellacious game of Russian Roulette. It was so bad that halfway through, I had to stop eating. This was such a great dish marred by something that I could not quite forgive. I know this was authentic food, but it was not worth risking my life. I could not even enjoy the tremendous flavor, because with each chewing motion, my brain was wondering, “What will I bite down on next?”

I went to pay and the man asked me how I liked it. Rather than complain, I just told him it was good (it was, uh, kinda) and that most Indian restaurants near me were northern. He replied that Amma’s was southern and that the types of cuisine are “very different”. That’s the word for it. Am I disappointed? Yes. Was this bad food? No, not at all. There’s a difference between “bad” and “not my thing”. This certainly was not (with the exception of the dosa). Am I glad I gave it a try? Absolutely. This was indigenous, village-style food in a warm and welcoming environment. You will temporarily feel transported somewhere else. Aside from that, I will have to give them a 3 out of 5 stars . If not for those bones and my life flashing before my eyes, it could have been much higher.

It was so bad that halfway through, I had to stop eating. This was such a great dish marred by something that I could not quite forgive.

I have to believe the kitchen knew of this danger…

Oh absolutely. This wasn’t a mistake. It’s how the dish was served. I wish there was some kind of note (or maybe I should have asked if it was boneless), because I would have gotten a dosa too.

I understand why you kept eating because it tasted so good. The first crunch of bone or shell puts me on my guard. The second is enough to scare me. You stuck it out longer than I would have. Nothing worse than worrying about the next bite is there.

Nothing worse than worrying about the next bite is there

Discretely (I hope) in to the napkin!